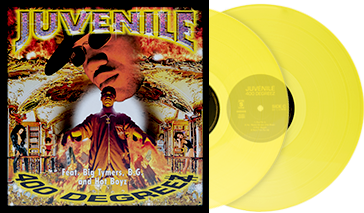 400 Degreez by Juvenile is the hip-hop Record Of The Month for Vinyl Me, Please. Get it now!

Throughout its first two decades, people mistook hip-hop for a coastal phenomenon. While today we celebrate its myriad forms everywhere from Atlanta to Seoul, for much of the time after its unruly birth in The Bronx this music seemed the sacred property of two very specific urban locales. Flare ups outside of Los Angeles and New York like the Miami bass boom that spawned 2 Live Crew or the Houston rap breakthrough of The Geto Boys weren’t granted the necessary oxygen to bring the heat of those cities into the national conversation.

Though absurd in Internet-age retrospect — which since revealed the full extent of what actually was happening in these vibrant yet overlooked scenes — the legitimacy of hip-hop cities below the Mason-Dixon line in particular was once in question, a product of media-supported fixation. The respective murders of 2Pac and The Notorious B.I.G. in 1996 and 1997 inadvertently broadened the conversation beyond the east and west. The toxic narrative that pitted rappers against one another by geography for so long had assuredly contributed to the tragic loss of two of the genre’s most beloved titans. A reckoning was inevitable.

Almost simultaneously with this grim moment in rap history, New Orleans-based imprints Cash Money and No Limit were proving they could push album units in significant numbers, thanks in no small part to the deals they’d signed with major label groups. Often excluded from airwaves and other means exposure outside of select regions in previous years, Southern rappers had long adapted to their situation by selling records in unconventional ways: neighborhood mom-and-pop shops and out of car trunks. Very few, if any, of those sales were reported to the RIAA or SoundScan.

Breaking beyond those local customs, Master P’s Ghetto D and Mystikal’s Unpredictable, among others, handily earned RIAA platinum status in 1998, with some going on to do even greater such certifications. While everyone has their respective favorites from that particularly pivotal year (one that brought us Big Pun’s Capital Punishment and DMX’s Flesh Of My Flesh Blood Of My Blood), the impact and legacy of Juvenile’s 400 Degreez easily makes it 1998’s most meaningful contribution to the overall discography of rap.

A New Orleans native who counted the city’s now-demolished Magnolia Projects as a home, Juvenile officially linked up with Cash Money early in 1997, dropping his first album for the label (Solja Rags) that May. Co-founders Bryan “Birdman” Williams and Ronald “Slim” Williams also made sure to include him in a quartet known as the Hot Boys that boasted labelmates B.G., Lil Wayne, and Turk for the October crew debut Get It How U Live. Yet it was his third overall album, 400 Degreez, that changed the game.

Over synthesizer-heavy instrumentals courtesy of in-house producer Mannie Fresh, Juvenile rapped about what he knew, recalling experiences and making references that listeners from Louisiana and other parts of the South could relate to far more than another gangsta yarn about Compton or Harlem. One of its biggest singles, Ha, took a facetiously detached second-person approach to dissect a culture of hustlers and hangers-on, a crucial read of the moment that prompted self-identification. Ghetto Children and the title track told compelling tales in miniature, a style considerably different from the longform godfather epics favored by boom bap dons and one that continues today in trap.

Equally deserving of the credit here, Mannie Fresh did more than lay down beats. Cultivating a contemporary sound indebted to the New Orleans funk tradition, his tracks reverberated off of Juvenile’s words. Sometimes, he provided the melody hook as on Gone Ride With Me, though other times like Ha he rapped erratically off the beat like some Blueface ancestor.

Selling more than four million copies in just two years, 400 Degreez put Cash Money on the proverbial map. Not to diminish what No Limit’s roster achieved contemporaneously, but Juvenile’s music reached places and ears that few rappers from the area had ever or would ever get to. Of course, Back That Azz Up did a lot of the heavy lifting, providing a handclap anthem for raunchy gentlemen’s clubs and liberating house parties alike. A shining example of why New Orleans hip-hop mattered, it reached No. 19 on the Billboard Hot 100 in 1999, spending a total of 30 weeks on the all-genre singles chart.

400 Degreez even spawned a quirky tradition in the rap rivalry canon. During a brief period of acrimony between Juvenile and his label, fellow Hot Boy Lil Wayne named his 2003 album 500 Degreez, a move which opened the door for a fitting comeuppance over a decade later when Young Thug dropped his Barter 6, a referential jab at Weezy’s Tha Carter album series. By the end of that same year, however, Juvenile and Cash Money had quashed their beef for the Christmastime release of Juve The Great, which marked his third solo full-length for the label to go platinum and gave him a Hot 100 chart-topping hit in Slow Motion.

The ubiquity of 400 Degreez and its singles gave Juvenile a national profile, shining a light on New Orleans that it might otherwise not have received. The potential for a pendulum swing back to the conservative coastal mindset still loomed, but his music gave America an appetite for something new. The following year brought albums by B.G. and Hot Boys as well as a Lil Wayne solo debut, all of which went platinum. There was no misreading this as some fluke. The South had officially arrived on the national stage — and it was here to stay.