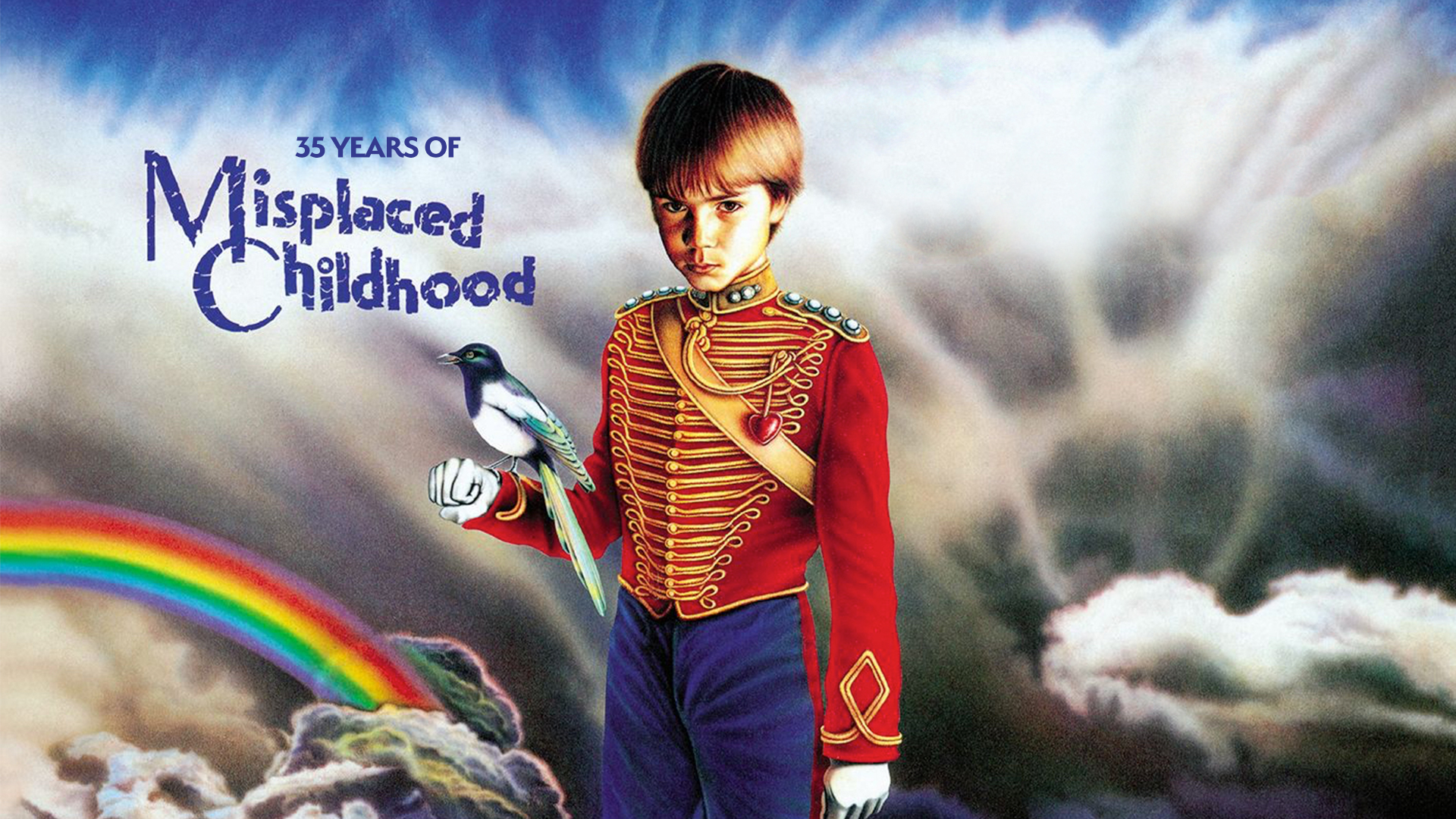 While the first two Marillion albums made a splash with the prog cognoscenti and hard rock critics in 1983 and 1984, the talented English band with the towering Scottish frontman was worried that the label, EMI, might drop them if the next release did not make serious bank — and they were precariously close to that reality. The budgets for their albums and videos had been compounding into serious debt, and they were a tricky band to promote. It was the mid-1980s, heavy metal and new wave were dominating internationally, and MTV was changing the game in terms of image and marketing.

So naturally, the group did what they thought best. They abandoned any pretense of commerciality and made a concept album. If this were to be the swan song, why not go all in? But against the odds — and pushback from their label — Marillion finally broke big. 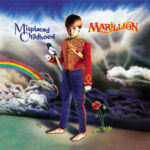 A little background is in order. Marillion formed in 1979 as Silmarillion (the name of a J.R.R. Tolkien literary collection). Guitarist Steve Rothery is the sole member of the original lineup to survive by the time the group, under their shortened moniker, recorded their debut Script For A Jester’s Tear for EMI in late 1982 and early 1983. By then, lead singer and lyricist Fish (Derek W. Dick), keyboardist Mark Kelly, bassist Pete Trewavas, and drummer Mick Pointer were onboard. For the 1984 follow-up, Fugazi, Pointer was replaced by Ian Mosley.

Despite being unfashionable with the times, their Genesis-influenced sound with a darker, heavier twist and well-produced thanks to the punchiness by Nick Tauber had made some waves. Their debut was certified platinum in the UK, and the sophomore album went gold. While not understood by mass media outlets, the solid first two Marillion albums, both Top 10 UK charters, were embraced within the hard rock and heavy metal press because of the edgier guitars on tracks like “Garden Party,” “Assassing,” and “Fugazi”. British rock magazines like Kerrang! covered the band as well as other “neo-prog” groups like Saga, Pallas, and IQ, all of whom took the epic ambitions of ’70s prog-rock heroes like Yes and ELP and generally distilled them into shorter songs without losing their superior musicality. They sounded more modern for the time, and the lyrics were more personal. (OK, Marillion liked longer tunes. This is a group whose debut single had a 17-minute B-side called “Grendel.”)

As the members of Marillion were working out their initial musical ideas for the as-yet-untitled Misplaced Childhood in rehearsal at Barwell Court, a now-defunct studio located in an old Victorian house in Surrey, Fish experienced an acid trip during which the vision of a young boy in a soldier’s uniform appeared. He spent the night scribbling down ideas, and that conjuration, augmented by an intense breakup with his girlfriend, became the centerpiece of the album and its cover by Mark Wilkinson. The group demoed songs and worked out some basic ideas, then road tested the first half of the album at year’s end while promoting their stopgap live release Real to Reel.

Once the group assembled at Hansa Tonstudio in West Berlin in March 1985 with producer Chris Kimsey — who had just recorded Killing Joke’s Night Time and whose past association with the Rolling Stones enticed the progressive quintet to work with him — they had two months to fully lay down their vision. Working with a new producer, recording in the studio where David Bowie created Low and “Heroes,” and experiencing the surreal atmosphere of West Berlin at a time when The Wall and Communist Russia loomed nearby, the members of Marillion found a lot of inspiration within and around them. Indeed, while Fish’s lyrics were more personal than they had ever been, it felt like there were socio-political undertones to a couple of key moments. His lyrics during “White Feather” are as much a plea for global unity as a personal cry:

I will wear your white feather, I will carry your white flag
I will swear I have no nation but I’m proud to own my heart

Whereas the first two Marillion albums favored a punchier sound and longer songs, Misplaced Childhood was a different animal. In retrospect, many of those songs feel naive compared to the third record. The sound became smoother, the words more poetic, and, in truth, it was actually more prog in that it featured 20-minute sides comprised of several songs that melded into each other. Within that collection were 17 interlaced compositions whose shorter lengths, intentionally or not, could appeal to non-prog fans with shorter attention spans. “Kayleigh” did not have a conventional structure for a pop hit — there were only two verse and chorus sections divided by the solo break — but it worked. The label did not want it for a single, but the group insisted on it and was proved right.

Further, the band members had become more proficient musicians, Fish’s lyrics had matured, and guitarist Steve Rothery developed his signature guitar sound (you know it when you hear it). All in all, Marillion’s third album was a collective odyssey and artistic leap forward.

“Meeting Marillion and the Misplaced album came at a perfect time in my career and my psyche,” producer Chris Kimsey told Stereonet in 2018. “As I kind of grew up more with theater and movie soundtracks; that was my upbringing. I wasn’t into Hendrix and all that. Even when I started at Olympic [Studios], I wasn’t into that.” He found the band to be incredibly theatrical and appreciated the fact that their new songs, which transformed into a concept album during the rehearsal process, had a theme running through it. “It evolved from the very beginning, and that really excited me. In fact, I had to keep that away from the record company as the record company would not have wanted that.”

Misplaced Childhood marries a narrative thread with internal strife. The protagonist, clearly Fish, is grieving over a serious romantic breakup, looking within himself to the parts that are broken, questioning his own excesses and the state of the world, and trying to rediscover the child in him that has been suppressed. The record opens with a melancholy, ambient prelude of “Pseudo Silk Kimono” and the ballad “Kayleigh,” then explores peaks and valleys of musical and emotional volatility, from ballads to rockers to spaced-out interludes. It ends on the very upbeat anthem “White Feather” that indicates that, despite the trials and tribulations he’s gone through, the singer looks hopefully to the future. The atmospheric “Perimeter Walk” section of “Blind Curve” clearly recreates part of Fish’s inspirational acid trip.

“I was really impressed when I first heard it,” cover artist Mark Wilkinson recalled of Misplaced Childhood to Discogs. “It was obvious to everyone that the band had gone up a fair few notches in musicianship, and the production was a huge step forward with Chris Kimsey. The subject matter was at once personal yet everyone could relate to parts of it because we all remember our childhood. It was a potent mix of great tunes and rich in the details of the writing. I loved it and still do.”

Misplaced Childhood makes a strong argument for sticking to one’s vision and defying the alleged wisdom of industry insiders. Although the first half of the album did not immediately register with many of Marillion’s fans when played live in late 1984, the finished result did. Promoted with the “Kayleigh” video shoot in Berlin, with Fish’s future first wife, Tamara Nowy, co-starring with him, the album immediately entered the UK charts at No. 1. It sold 300,000 copies in the UK, eventually 500,000 in Germany, and hit No. 47 in the U.S. where, oddly enough, the ballad video was played on MTV’s hard-rocking Headbanger’s Ball. “Kayleigh” hit No. 2 in the UK and peaked at #74 on the Billboard Hot 100 singles chart. Videos for “Lavender” and “Heart Of Lothian” were also filmed. The songs had equally unconventional structures, while the “Lavender” clip offered a slightly different version to make it feel like a separate single and not part of a greater whole.

In America, they opened a dozen tour dates for Rush on that Canadian group’s Power Windows tour in 1986.

“When we first opened for Rush at Radio City Music Hall in ’84, the audience hated us,” keyboardist Mark Kelly told The Metal Voice in 2019. “It was five nights, and every night was terrible. We had people heckling us. About a year later, we get a phone call from our agent saying, ‘Rush wants you to open for them on their upcoming Power Windows tour.’ And we said, ‘Really?’ They said, ‘Yes, Rush really liked you.’ We said, ‘OK, we’ll do it, but we’re gonna play Misplaced Childhood the entire album from start to finish so that people can’t boo us between songs.’ That was the reason why we played the whole album as [it] was one continuous piece of music. It was actually really good, and, in fact, in Canada, we picked up over an entire audience.”

It was a glorious time for Marillion. Amazingly enough, there was one key person who had not been aware of her influence on this era. In 2017, Fish recounted to Louder Sound’s Fraser Lewry about reuniting with Kay Lee Atkinson, the woman who inspired the band’s big hit single, in 2005. The singer had agreed to not discuss her with the press back in the day, and the band had originally objected to him using the invented name Kayleigh at all. As it turns out, she had never heard the song that she inspired.

“It was just one of those things, old friends getting in contact again,” Fish explained to Lewry. “She came to a show, then she came round for lunch and to meet my daughter, and I asked if she’d ever heard the album. She said she hadn’t, so I gave her a copy. She called me up and said she’d cried nearly most of the way home, that she’d never realized what I’d written. And that was one of the most touching things I ever heard. I was really glad she heard the album, but it was a personal thing more than anything else.”

The irony of Misplaced Childhood‘s breakthrough is that it put more pressure on the group to be successful. The poignant and underrated follow-up, 1987’s Clutching at Straws, did not do the same kind of business. Unlike Misplaced Childhood, it’s a downer. The lyrics deal with alcoholism, divorce, and social discord. Again, the group followed their hearts and not commercial considerations. At the same time, creative differences were flaring up.

Both Misplaced Childhood and Clutching at Straws would set the stage for Fish’s amazing first solo album, Vigil in a Wilderness of Mirrors, which this writer considers to be the best rock album ever made and even more relevant today given our tumultuous times. If you listen to the Marillion demos from the post-Clutching album that would turn into Season’s End with Fish’s replacement, Steve Hogarth, it is clear that Fish’s lyrics and the band’s music were moving in different directions. It worked out well for both sides as they carried on with their lives (sound familiar?), held on to their artistic visions, and found continued success on their own terms, even if it was not playing arenas. Marillion even pioneered crowdfunding back in 1999.

If Fish, Marillion, and Misplaced Childhood have taught us anything, its that the best art comes from knowing who you are, expressing it, and finding your audience that way. While they have plenty of worthy releases, Misplaced Childhood remains an undeniable masterpiece.