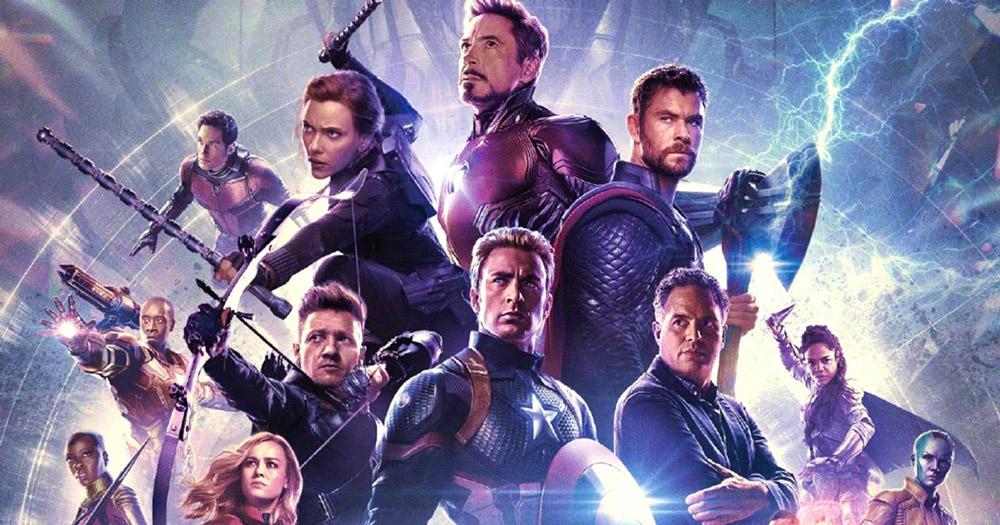 Fanboys and girls worldwide lost their minds as Avengers: Endgame arrived in theaters, wrapping up the most ambitious, sprawling, and successful storyline in movie history. That bastard Thanos was taken down, and the Marvel Cinematic Universe was changed forever.

Over the course of the 22 movies that comprise the MCU, there has consistently been expert, and even thrilling, use of familiar music. In fact, many of these Marvel music moments are available on vinyl!

The Guardians of the Galaxy: Awesome Mix Vol. 1 reached No. 1 on the Billboard charts for a reason, namely because it’s awesome, but that awesomeness has everything to do with how director James Gunn used those songs in the movie.

To celebrate Endgame, here’s a list of epic moments where Marvel met music, and everyone left happy. It might not have your favorite moment because no list is perfect, but Discogs has given me the Internet version of the Infinity Gauntlet: absolute listicle power.

So like Loki said in the first Avengers movie, “Kneel before me. I said, ‘KNEEEEEEEEEEEEELLLLLL!!!!’” 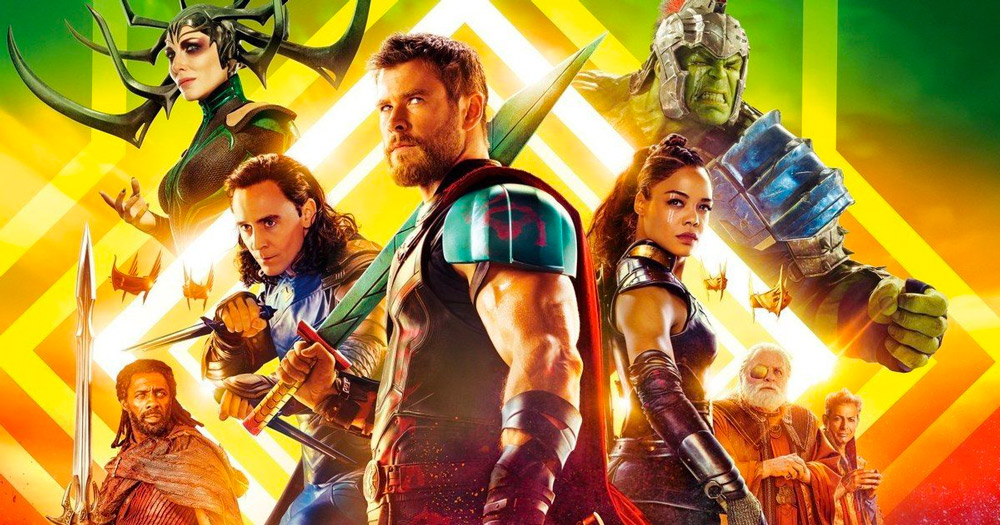 The MCU is filled with dozens of great scenes, but one of the most glorious is Thor’s comeback victory against Hela, his sister — and, oh yeah, goddess of death.

2017’s Thor: Ragnarok is one of the MCU’s finest movies, in part because it offers such a complete version of Thor, a god who is equal parts hero and beach bro. As Hela is absolutely punishing Thor, who’s already down to one eye and without his hammer, he summons his power over lightning and … cue Immigrant Song.

This is the equivalent of movies and music making babies together with fierce, sweaty intent. People came out of their damn seats in the theater as Led Zeppelin’s paean to the Norse gods roared, and a slow-motion Thor rode sheets of lightning into battle.

There are a lot of versions of Zeppelin III, but anyone serious about both sound quality and collectibility should go for an original UK press or the Canadian red label, which has a lot of fans. 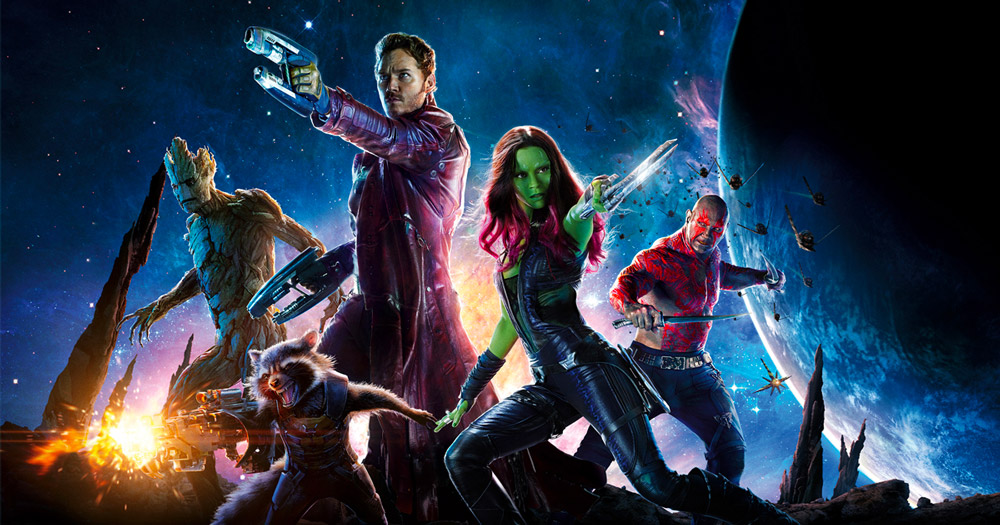 Here’s the thing a lot of people don’t understand: The Spinners’ The Rubberband Man is one of history’s greatest songs. Everything about it is perfection, from singer Philippé Wynne’s typically incredible vocal to how the gleeful bass line sounds as if it were played on an actual giant rubber band.

Also, who is this Rubberband Man? How did he learn to inspire true happiness by using his toes — and nose! — to play music on rubber bands? He’s truly a hero for our times and just the kind of guy that Peter Quill would actually believe is a real hero. After all, he thinks Footloose is history’s best movie.

That’s why it was the ideal song to use as the Guardians of the Galaxy were introduced in 2018’s Avengers: Infinity War. The Guardians have the MCU’s most clearly fleshed-out characters, and this brief scene is not only fun but shows how much Gamora has embraced Quill’s throwback worldview. 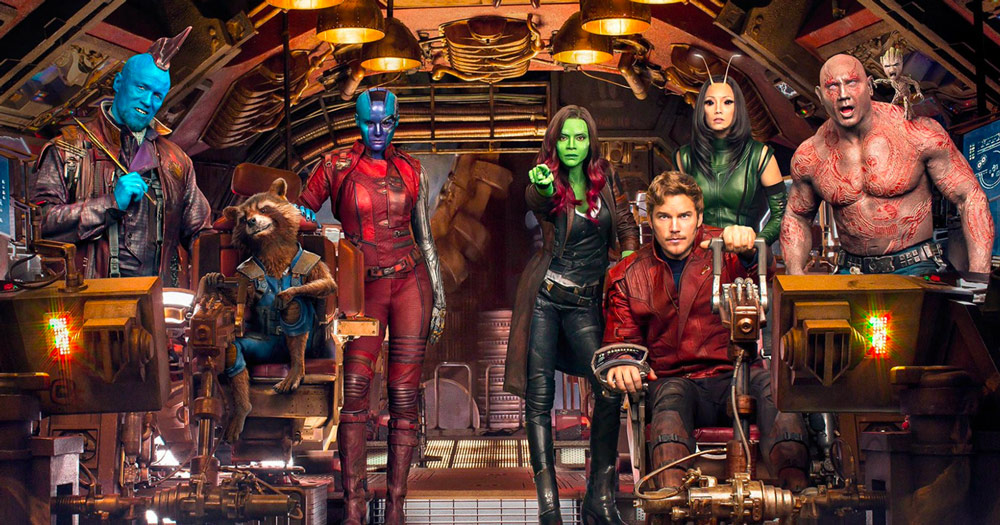 Guardians of the Galaxy was a turning point in the MCU, proving that a Marvel movie could be genuinely funny, which is different from just having a few good jokes. It was the first soundtrack featuring previously-released songs to reach No. 1 on the Billboard Top 200, and we can thank Redbone for that.

The opening credit sequence, with Quill/Star-Lord stealing what turns out to be an Infinity Stone, establishes the tone of the movie and Quill’s personality, all to the tune of Come and Get Your Love. I would argue that this isn’t Gunn’s best song choice — we’ll get to that in a second — but maybe his most important.

The soundtrack is well worth having for anyone who doesn’t already have a decent stash of 1970s music. 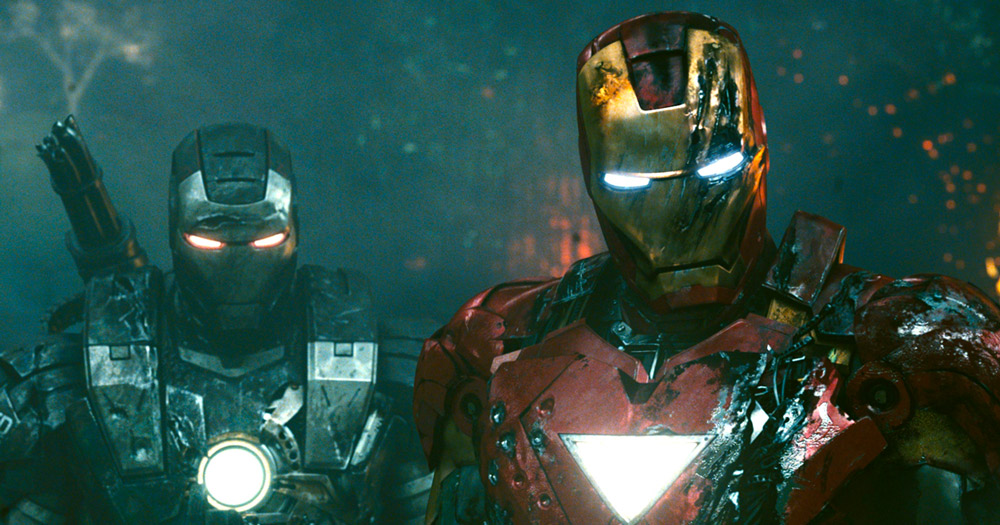 AC/DC is the MCU’s most prominent rocker, and Back In Black was the first sound heard as the MCU arrived in all its glory with 2008’s Iron Man, blasting over the film’s opening scene and establishing Tony Stark’s screw-it-all attitude.

But that can’t touch the scene in 2012’s The Avengers when Iron Man arrives to confront Loki, in the process overriding the Quinjet’s PA to crank Shoot to Thrill as he drills Loki with repulsor rays. This is apparently Tony’s favorite AC/DC song as he also used it to announce his entrance in 2010’s Iron Man 2.

The soundtrack of songs from The Avengers is eminently forgettable but Shoot to Thrill is included on the Iron Man 2 all AC/DC soundtrack, which serves as a nice best-of and is the only MCU soundtrack dedicated to a single band. 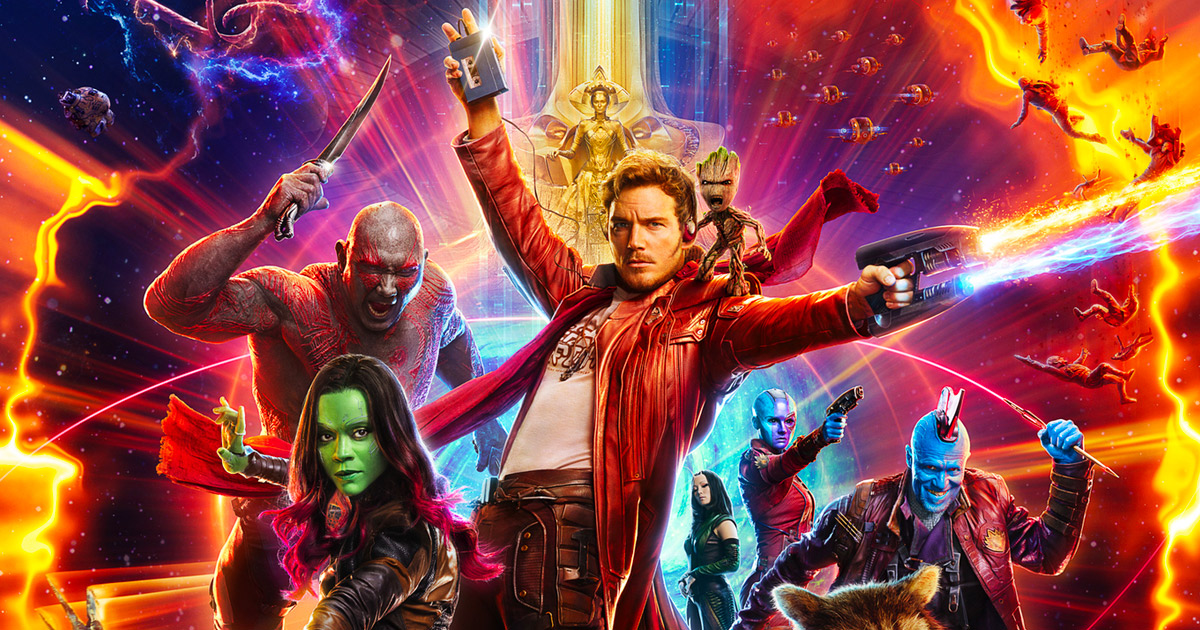 Guardians of the Galaxy Vol. 2 isn’t as good as the first, but that opening fight scene sure was promising. As the rest of the Guardians battle an enormous space creature, tiny Groot is preoccupied with getting his jamz on and chooses Electric Light Orchestra’s Mr. Blue Sky, a song that only gets better with time.

The juxtaposition of tiny Groot’s awkward dancing to a Jeff Lynne classic against the insane violence happening all around him is the Guardians in a nutshell. There are a ton of good songs on the soundtrack, which is still affordable. 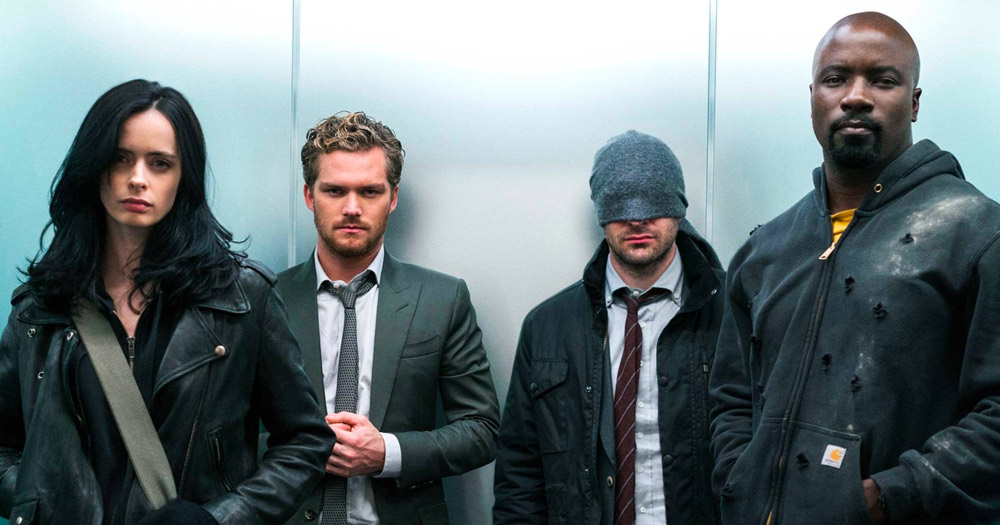 Television theme songs about crimefighters will never get any better than Henry Mancini’s theme for Peter Gunn, a hyper-cool slice of detective noir that has been obsessively covered by everyone from Jimi Hendrix to The Art of Noise.

But composers working with characters from Marvel’s supergroup of loners, The Defenders, have delivered some quality themes — and sparked a growing collectible market for the 7-inch singles released by Marvel and Netflix. 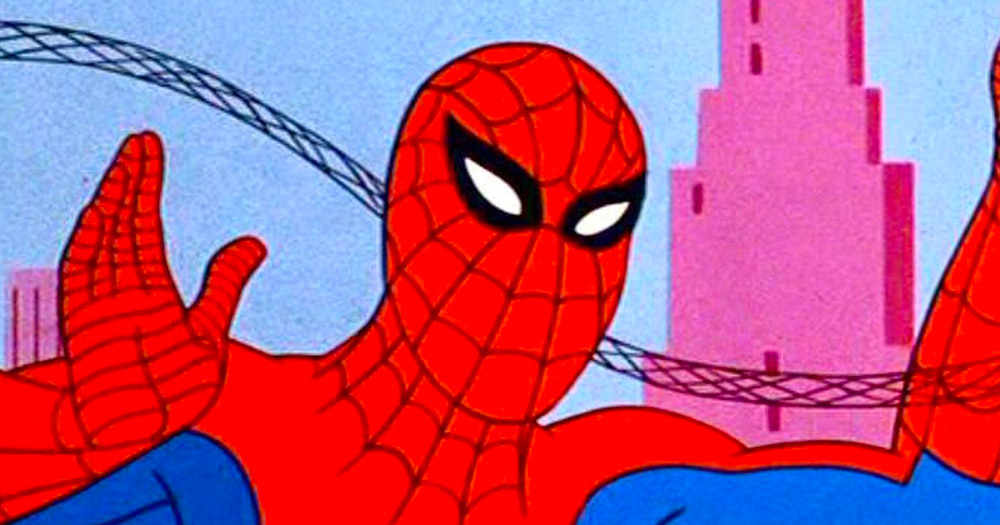 The Ramones’ Blitzkrieg Bop makes an effective appearance in 2017’s Spider-Man: Homecoming, reuniting one of New York’s most iconic bands with its old stomping grounds. It works. It really does!

But is it better than The Ramones’ cover of the 1960s Spidey cartoon theme, even though that has nothing to do with MCU canon? No. No, it isn’t.

This was a marriage made in heaven, and maybe one day it’ll find its way into the MCU. For now though, you can only find it on Saturday Morning Cartoons’ Greatest Hits, an MCA compilation loaded with artists such as Matthew Sweet, Helmet, and Butthole Surfers. The vinyl is getting pricey, so maybe it’s worth grabbing before a CGI Joey actually does show up in a Spider-Man movie. 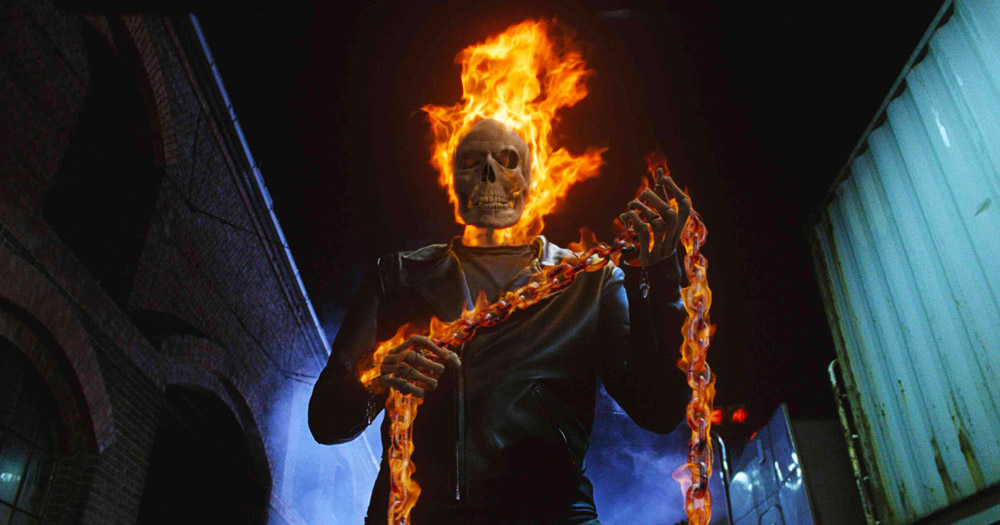 And finally, a song that is completely unrelated to MCU canon but absolutely cuts to the heart of what it means to be a fan.

In 1977, a Jersey band called Suicide released its self-titled debut album, a starkly riveting piece of electronic art punk. The music of Alan Vega and Martin Rev now sounds both primal and prescient. They led off their introduction to the world with Ghost Rider, a song about Marvel’s Johnny Blaze.

The song is insane — almost as insane as the Nic Cage Ghost Rider movies — and any fan of terrifying proto-punk minimalism needs this record, because the entire album is nuts. But unless you’re blessed with deep pockets, you’re stuck with a reissue because a first pressing starts at $100.