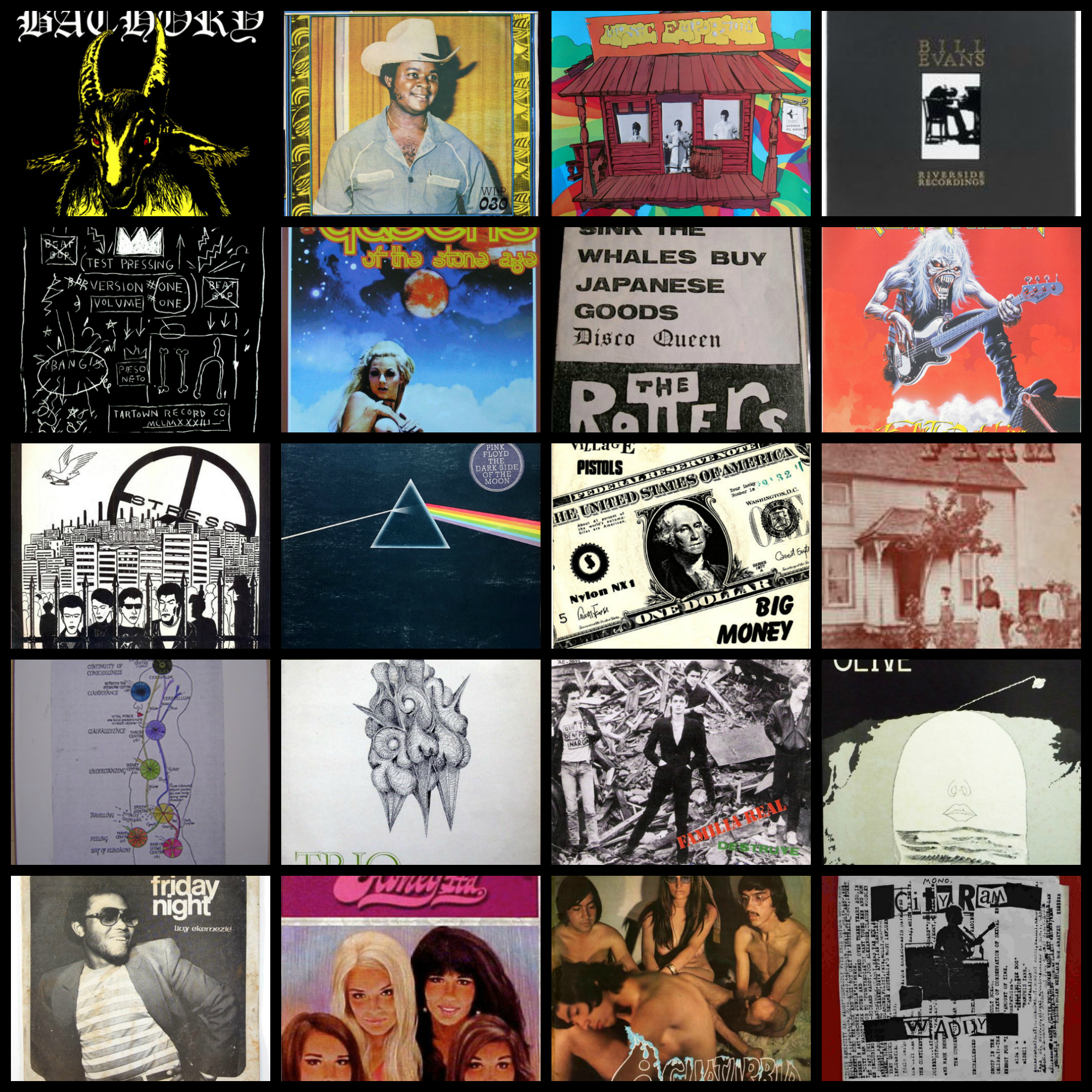 As an organized person, there is very little in this world that I’ve come to despise more than an unapologetic mess. I want a plan, I want a neat stack of papers, and I want to get all of my support requests from the Discogs community squared away before I start writing my September Top 30 post. More than that, though, I want to find The Story that sits at the center of each of these Top 30 posts. And then I will tell The Story. Because there has to be The Story, right?

Well, no, not this month.

I don’t want these lists to be random, but that’s just the way life works, whether I dig it or not, and sometimes you can’t force a narrative on pure hodgepodge. I mean, you look at this top five and find me a common thread:

1: An original pressing of the self-titled 1969 debut from Music Emporium, a group of SoCal psychedelic rockers. They printed only 300 copies of what turned out to be a hidden gem for fans of that certain groovy sound. The result is a $3200 asking price on Discogs.

2: Another self-titled debut (okay, there’s a common thread, I guess), this time from Detroit-area girl group Honey Ltd. This LP is vintage ’68, which helps to explain why these ladies were dipping their four-part harmony toes into the sonic waters of pop, psychedelia, soul, dance, and rock. It might even possibly explain why copies of this record can sell for $2199. Possibly.

3: A 1979 punk rarity (only 100 copies thought to exist) from the land down under. This 7″ was released under the nom de noise City Ram Waddy, better known (perhaps?) as Richard Waddy. Still nothing? The drummer from the Screaming Abdabs? Oh, no, not those Screaming Abdabs. Yeah, carry on. I mean, unless you want a copy. Though you’d better have $2194 burning a hole in your pocket. But, hey, I don’t know you, maybe you have EXACTLY $2194 burning a hole in your pocket. More power to ya! Side note: you will, of course, have to find another copy for sale. Sorry to get your hopes up.

4: Guided By Voices. Whoa, they’re not so obscure! How did they get here? Sounds like first pressing copies of their 1992 LP Propellor were limited to 500 hand-decorated copies, resulting in a $2k sticker price. Even though Ol’ Bob Pollard and co. are your obligatory Big Name at the top of the charts this month, this is, not surprisingly, only the second time GBV has wormed into our top 5. So maybe that should read “Big” Name. Don’t worry, we’ll probably get Zeppelin back up here next month.

5: Trio, a 1967 release from British jazzers The Mike Taylor Trio. I’m going to be honest: I don’t know anything about this release and I refuse to learn more because my eyes instantly fixed on that Jack Bruce credit and, dammit, that’s explanation enough for $1678 worth of sweet bass-y goodness. Take that, John Paul Jones! [I’m just kidding; I love you, too, JPJ.]

So, yeah, you draw a throughline there. Oh, and factor in the rest of the top 30, too, from repeat faves like the world’s most famous prism and that creepy yellow goat to first timers like Mr. Tom Petty and rare Maiden (nope, this is not the Maiden you’re thinking of, and, yep, this is the first time this release has been in the top 30, although I think it’s more surprising that Tom Petty hasn’t been here before…I’m sorry, I just can’t get over this…gimme a second…Breakdown Breakdown Refugee Breakdown…okay, go). You’ll even find a rare Spanish punk single which had never previously sold on Discogs until our very own loquearde pointed out just how awesome/rare it is. If you can synthesize all of that and come up with anything other than complete and utter chaos, I’m all ears.

Y’know what, though? Sometimes it’s good to embrace the chaos. I’m learning a lot about that right now. To get real on ya for a second (sorry), I became a dad for the first time back at the end of July, and one thing I’ve learned in the past three-plus months is that BABIES DO NOT CARE ABOUT YOUR PLANS. A baby may let you do what you thought you were going to do, but a baby might also emphatically not let you do what you thought you were going to do. I believe this is because babies themselves are incapable of planning and, really, why should I have all the fun with my foresight and careful consideration of scheduling? Then again, ascribing motivation to a baby is tricky business. The real motivation is poop poop eat poop eat. And then your daughter learns to giggle and smile and I’m sorry, what were we talking about? I’ve got a giggly baby smiling at me so I kind of don’t care anymore.

Oh, right, chaos! Yeah, embrace the chaos! Another real-world example: as I’m writing this, I have no idea how the forthcoming US election is going to play out, because I’m getting my work done well in advance of my deadline (*cough* goodygoodytwoshoes *coughcough*). I feel incredibly jealous of you, my friend, seeing as how you are now living in my future, with full knowledge of what is utterly uncertain to me at this time. [Unless, of course, the damn thing isn’t settled yet for you, either, in which case we have all clearly done something terrible to deserve our fate.] This uncertainty is weighing heavily on my mind and I’m trying to make sense of contradictory signs, facts, figures, data and stories. I want to feel confident about the outcome. I desperately want that! It’s a pipe dream, though, and I know it. No amount of wishing for order right now is going to make it so. I just have to put up with a Tuesday full of nonsense and hope for the best. Why not lean into it? I don’t know what that actually means at this point, other than getting blackout drunk until Wednesday morning, but that’s probably a bad call. Again, giggly smiling baby. So, uh, maybe I’ll just watch some Westworld or something.

So here’s to you, chaos. As a matter of fact, this makes me doubt whether I should even be looking for The Story from month to month after all. Old habits die hard; I’m sure I’ll find a way to tease out some flimsy excuse for a theme next time. But maybe, just maybe, I’ll sit back and let the list take me away.

Then again, I’ll have no other option if I see another 30 items that are anything like the Discogs Top 30 Most Expensive Items Sold List from September 2016. I guess we’ll just have to see what you throw at me, Discogs Marketplace.

And you, dear reader, will just have to see how I respond to what gets thrown at me. Until then, feel free to throw words my way in the comments below. As always, though, don’t forget to check out this month’s list first! Or, you know, do things in whatever order you’d like. So…very…chaotic…