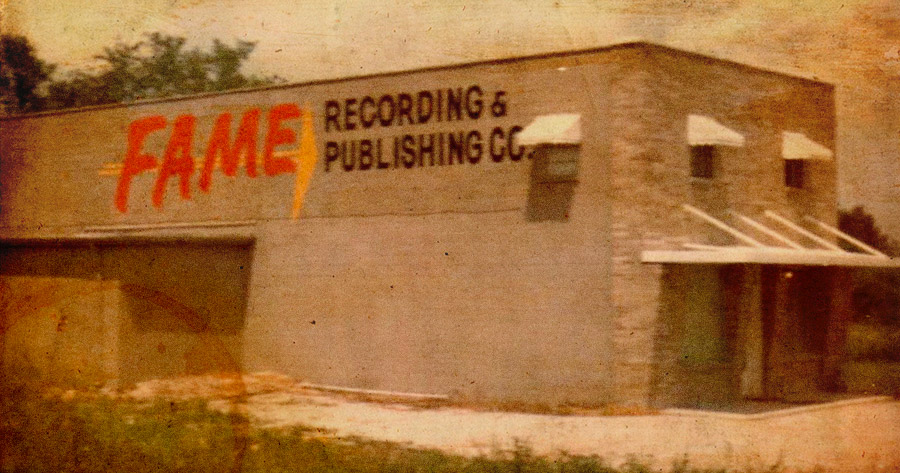 Back in a tumultuous time in American history, a tiny Southern recording studio became a bastion of harmony. FAME Studios, aka “Florence Alabama Music Enterprises,” is still that unique space, from which disparate genres — soul, blues, country, R&B, and rock — have always shared a common thread.

Founded in 1959 by Rick Hall, Billy Sherrill, and Tom Stafford, FAME was an unassuming locale. The studio first opened above a drug store and a pawn shop in its titular Southern town. Arthur Alexander’s soul gem You Better Move On became its first hit. Thanks to its success, the studio was able to take the proceeds and move from Florence to a former tobacco warehouse in Muscle Shoals, Ala.

Miraculously, a racially and creatively progressive musical Mecca sprung up in, as The Anniston Star paper would later put it in a tribute, “a state seldom publicized for anything but college football and embarrassing politics.”

In the ensuing decades, FAME Studios wrought hits from Bobby Gentry, Aretha Franklin, The Rolling Stones, Wilson Pickett, and many others. And in those days, the engine was its one-of-a-kind house band, the Muscle Shoals Rhythm Section, featuring guitarist Jimmy Johnson, keyboardist Barry Beckett, bassist David Hood, and drummer Roger Hawkins. That ensemble’s legacy would only grow from there; they packed up and started their own legendary venture, Muscle Shoals Sound Studio, in 1969.

Though Hall sadly passed away in January 2018, FAME Studios is still going strong, with modern roots-leaning songwriters like Jason Isbell, Tim McGraw, Martina McBride, and the Dixie Chicks all choosing to create within its hallowed walls.

As the self-described “heartbeat of the Muscle Shoals Sound,” FAME Studios belongs alongside Abbey Road, Ardent, and Hitsville U.S.A. in the highest echelon of great rock and roll locales. Here are the 10 most popular albums ever cut there, according to the Discogs community. The Sound of Wilson Pickett

If you’re looking for an introduction to good old Southern soul from the late ’60s, apply here. Pickett was on fire in those days; The Sound of Wilson Pickett is one of three albums he issued in 1967. He wasn’t always a FAME recording artist; he’d done previous material at Stax Records’ studio in Memphis, Tenn., but when they decided to ban outside productions, the singer fled for FAME. Pickett would record some of his biggest hits in that converted warehouse, including his classic reading of Funky Broadway, featured on this disc. But really, great performances are everywhere on The Sound of Wilson Pickett, from barn-burning grooves (Soul Dance Number Three) to expressive slow-jams (I’m Sorry About That). It’s one of soul’s all-time talents at the top of his game. An obvious worshipper of Sam Cooke who never quite forged his own path, Arthur Conley still delivered some fine Southern soul despite being far from a household name. 1967’s Shake, Rattle and Roll features some uncanny Cooke imitations — he’s got his phrasing and vocal grit down on the title track — and to drive it home further, he even covers A Change Is Gonna Come. Despite all the aping, Shake, Rattle and Roll is well-produced and goes down easy if you come at it from a completist’s standpoint. Conley would turn out to be a tragic figure; feeling like he’d be targeted by the public for his homosexuality, he moved to Amsterdam and changed his name to Lee Roberts. Though he’d shown promise in American markets, his insecure rebranding confused whatever fans he’d accrued, ultimately derailing his commercial momentum before he passed away at 57. In 1960, Etta James hit the ground running; her debut album At Last! is still considered a masterpiece of soul. In 1968, she’d decamp from Chess to FAME Studios for the first time at the behest of Leonard Chess. The change of scenery paid off; Tell Mama is perhaps her lushest, most full-blooded work. Highlights abound! Her relentlessly driving take on Don Covay’s Watch Dog is on par with other proto-feminist anthems like These Boots Are Made For Walkin’, while It Hurts Me So Much rides gnarly, emotional waves of desperation. On Tell Mama, James bore her soul more nakedly and honestly than ever — and had a major hit in the process. I Never Loved A Man The Way I Love You

The Queen of Soul’s most well-known album — the one that gave us Respect and Do Right Woman, Do Right Man was only partially recorded at FAME Studios, but its Southern-fried sound rings out loud and clear. Franklin had mostly recorded at Columbia, but for her 10th album, producer and svengali Jerry Wexler personally tapped the Muscle Shoals Rhythm Section to bring their unique fire to this classic-to-be. Franklin being egged on by the Muscle Shoals crew during cuts like Drown In My Own Tears and Soul Serenade is something you’ve got to hear to believe. Burning through 11 songs in a scant 30 minutes, the Queen never burned this bright on an LP before or since. A blue-eyed-soul contralto and an underrated storyteller, Bobbie Gentry was ready to make her most decorated, lavish album to date with Fancy. Like Franklin’s I Never Loved a Man The Way I Love You, Fancy was split between Columbia and FAME Studios, with Rick Hall at the helm for both. Fancy isn’t typically as well-known as Gentry’s 1967 breakout album, Ode To Billie Joe, but it has charms all its own. The song choices are killer for Gentry’s voice, especially when she tries on an earthy, huskier approach for Leon Russell’s Delta Man and accesses Laura Nyro’s bottomless melancholy on her Wedding Bell Blues. While polished covers albums like this saturated the market in its day, Fancy is a sassy, appealing mini-tour of the 1970s songbook. Rick Hall produced the sixth long-player by the innocuous musical family that saturated pop culture in the ’60s and ’70s. While Donny, Jimmy, Marie and the rest would go on to try marginally more edgy styles — like 1972’s rock-oriented Crazy Horses — Osmonds is right in their squeaky-clean, gee-whiz wheelhouse. While Hall was surely used to edgier, grittier material at this point, he steps up to the plate on Osmonds, shining every happy-go-lucky harmony vocal and tinkling glockenspiel to a palatable sheen. Whatever Hall’s approach, it certainly worked. The Osmond’s Jackson 5-style reading of George Jackson’s One Bad Apple rocketed to No. 1. The late, great Allman Brothers Band guitarist left us far too young at 24, leaving behind a small-yet-precious body of work. An Anthology, which features a handful of FAME Studios-recorded cuts, is a fascinating look into Duane Allman’s work as a sideman, collaborator, and solo artist. Despite the disparity of artists featured — the set ranges from Aretha Franklin to Boz Scaggs — Allman’s heart-stopping lead guitar ties it all together. It’s a series of signposts as to where a singular talent could have gone; whether tearing it up with the Allman Brothers and Derek & the Dominos, or backing up Muscle Shoals acts, he was tantalizingly just getting started. Back in 1982, this Country Music Hall of Famer did a bunch of impressions of country hitmakers — and scored one of his own biggest hits in the process. The Bird, a silly talking-blues novelty song in which Jerry Reed encounters a salesman whose talking bird can imitate George Jones and Willie Nelson to a tee. (“Anyone got a BB gun?!” he reacts during the bird’s rendition of On the Road Again.) The Bird was played for a laugh, yet ended up a massive hit. The titular, FAME-recorded album it belongs to doesn’t stop there: His rendition of Tim DuBois’ alimony anthem She Got The Goldmine (I Got The Shaft) would be this country legend’s final number-one hit. In 2002, a new presence would leave Athens, Ga., rock heroes Drive-By Truckers permanently changed. The precocious, then-teenaged Jason Isbell joined co-leaders Patterson Hood and Mike Cooley as their third guitarist and songwriter, kicking the band into an even higher level of energy. For his second album with the crew, The Dirty South, all three songwriters turned up the heat. It’s a shit-kicking bullfight of an album. Recorded ultra-dry and mostly live at FAME Studios, The Dirty South practically bursts at its seams. Cooley’s anthemic opener Where The Devil Don’t Stay is practically the Truckers’ statement of purpose, Hood’s Tornadoes whips the band into a stormy, Sonic Youth-style frenzy, and Isbell delivers his haunting character studies Danko/Manuel and Goddamn Lonely Love. Isbell’s days in the band were numbered, with conflicting egos and substance abuse leading to his exit in 2007. But on The Dirty South, Drive-By Truckers got to be the fearsome, three-headed monster they always threatened to be — and the results are still thrilling. St. Paul and the Broken Bones

With an appealing sound that harkens back to the days of Stax, Volt and FAME, St. Paul and the Broken Bones’ debut album updated a classic sound for a modern context. They even recorded right where their influences had lain the classics to tape. Half The City enjoys the same earthy, tape-saturated sonic approach that made hits by Wilson Pickett and Arthur Alexander really pop. Leader Paul Janeway lets it rip over his dynamic eight-piece band, going alternately downbeat and fiery depending on the material. Just listen to him testifying on Broken Bones & Pocket Change or riding the snaky groove of Let It Be So. If a soul-minded listener is curious about hearing the classic Muscle Shoals sound passed to a new generation, Half the City is worth seeking out immediately.