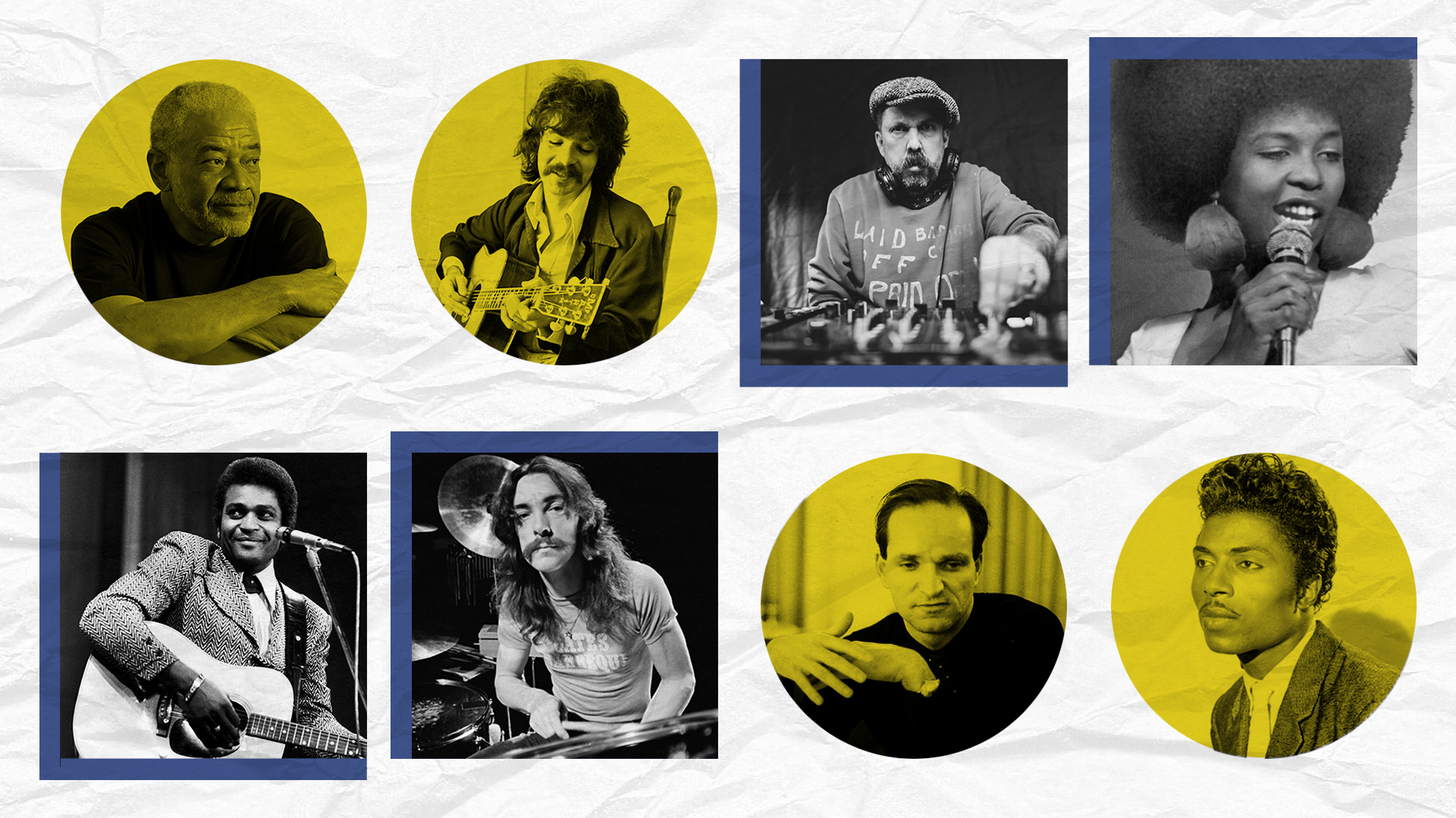 Important artists die all the time. That’s the unwritten contract we sign as fans of music: Someday, the person that made that song or album that meant so much to us will no longer be walking this planet. Most years, we can accept that bargain. But in 2020, a 12-month stretch that has felt like a never-ending gauntlet of bad news and worse news, losing those folks responsible for the sounds that often help us weather these bad times has felt more acute and heartbreaking than ever before.

This is hardly a comprehensive list of the musicians that left us this year, but it is a fair representation of the breadth of talent whose deaths had perhaps the biggest global impact. Nor are these short blurbs able to capture the full arc of these artists’ lives and legacies. This is a starting point and a conversation starter. If you don’t know some of these names, hopefully, this will inspire you to dig deeper into their work. And if you are a fan of anyone below, know that we share in your sorrow at their passing and intend this to celebrate their achievements.

Editor’s note: Shout out to MF Doom, whose untimely passing was announced by his family on the last day of 2020. A full story is coming soon. Rest in peace.

When he landed his first hit with 1971’s “Ain’t No Sunshine,” Bill Withers refused to give up his day job in the manufacturing industry, insisting that it was a fluke. Instead, the soul/R&B legend went on to rack up 13 Top 20 R&B hits and three Grammy Awards, as well as induction into the Rock ‘n’ Roll Hall of Fame in 2015.

Following gingerly in the footsteps of his firebrand father, Steve Earle, and Townes Van Zandt, the country/folk legend that his parents named him after, Justin Townes Earle slowly and steadily found his own path as a singer-songwriter. Through his eight albums, he folded the influences of rockabilly, soul, and pure Nashville country into his energetic, heartfelt compositions.

Beloved of fellow songwriters like Bob Dylan and Kris Kristofferson, Illinois-bred John Prine suffused his songs with rich, literary details, no matter if the subject was the waning days of an elderly couple or a drug-addicted Vietnam vet or the so-called missing years of Jesus Christ.

Essential song: “Angel From Montgomery” (and our favorite covers)

One of the foundational artists in what we now call rock n’ roll, and one of the most unapologetically flamboyant musicians to ever walk this planet. Everyone on this list owes a debt to Little Richard whether they realize it or not.

Rush was a great heavy rock band before Neil Peart joined the group, but it was his drumming and his hyperliterate lyrics that helped the Canadian trio reach legendary status.

No other guitar player has come close to what Eddie Van Halen pioneered in his lifetime through a dozen albums with his namesake band. He also played the (uncredited) guitar solo on “Beat It” and reportedly asked for a case of beer and dance lessons from Michael Jackson as compensation.

Malik B. is one of the founding members of The Roots and one of the few rappers that could match his bandmate, Black Thought, in lyrical wit and rhythmic dexterity.

Peter Green is the founding guitarist of Fleetwood Mac and helped usher their evolution from a blues-psych maelstrom into the more lucid and lyrical work the group would explore following his departure in 1970.

When she wasn’t scoring her own hits, soul and R&B genius Betty Wright worked behind the scenes, mentoring artists like Gloria Estefan and Joss Stone and producing tracks for everyone from Tom Jones to Diane Birch.

Country-pop royalty. Kenny Rogers came of musical age with the rockers, The First Edition, but soon eclipsed the group and became a superstar. He recorded the definitive version of classics by the Bee Gees, Lionel Richie, and Mel Tillis. Best beard in show business.

D Magazine scribe Christopher Mosley said it best when, in his eulogy for the late Power Trip vocalist, he referred to Riley Gale as “a music scene diplomat.” Few men in metal worked harder to represent his hometown of Dallas, Texas, and to make sure that fans of all ages, genders, and races were embraced and emboldened.

Essential song: “If Not Us Then Who?”

Adam Schlesinger is the most preternaturally talented songwriter of the 20th and 21st century who found pop success with Fountains of Wayne, achieved TV glory through his work on Crazy Ex-Girlfriend, scored an Oscar nomination for the theme song to That Thing You Do!, and worked with a dizzying array of artists.

Essential song: “That Thing You Do!”

A singer-songwriter adored by his outlaw country compadres, Billy Joe Shaver earned his breakthrough when he wrote and co-wrote nearly all the material on Waylon Jennings’ 1972 album Honky Tonk Heroes. His gritty cowboy songs balanced deep wells of emotion with flashes of cutting wit.

Though he came up through the Greenwich Village folk scene of the ’60s, Jerry Jeff Walker made his name among the outlaw country community thanks to his rough and tumble songs, tinged with glowing romanticism. He’s beloved enough to be name-dropped in Willie and Waylon’s “Luckenbach, Texas.”

Hailing from Australia, singer Helen Reddy became a superstar thanks to her recording of the feminist anthem “I Am Woman” in 1972. What followed was a multifaceted career that included film and theater roles, and, in her later years, work as a therapist.

Essential song: “I Am Woman”

Toots Hibbert is the man credited with giving his chosen genre its name via his 1968 song “Do The Reggay.” He is one of the most energetic and joyous live performers ever to tread the boards. Lent his talents to albums by Willie Nelson, Major Lazer, and Gov’t Mule. Soulful, versatile, and brilliant.

As a session player, Charlie Daniels found plenty of work in Nashville, backing up the likes of Dylan, Leonard Cohen, and the Marshall Tucker Band. As a recording artist who scored a crossover pop hit about a fiddle contest with Satan, he helped turn country music into the commercial juggernaut it is today.

Essential song: “The Devil Went Down to Georgia”

If this guitarist and songwriter is only remembered for co-writing the hit “Fade Into You,” that would be enough. But from his days as a member of Paisley Underground group The Rain Parade to his final recordings with Mazzy Star, David Roback built a remarkable catalog of neo-psychedelia and dream pop.

Essential song: “Fade Into You”

With schoolmate and fellow Kraftwerk founder Ralf Hutter, Florian Schneider is responsible for inspiring the last 40 years of synth-pop, electronic dance music, and hip-hop, as well as the funkiest odes to home computers, Tour de France, and neon lights ever recorded.

Frequent collaborator Brian Eno referred to composer Harold Budd as “a great abstract painter trapped in the body of a musician” such were the bold colors and impressionistic sounds that Budd created throughout a long career that found him working with Cocteau Twins, XTC’s Andy Partridge, and U2.

McCoy Tyner is the quintessential post-bop pianist. Powerful enough to hold his own in a quartet that included John Coltrane, Jimmy Garrison, and Elvin Jones. He was committed to pure melodies and acoustic instrumentation when many of his contemporaries were veering off into free jazz and synthesizers.

This U.K. producer and remixer possessed the sharpest ears and the fleetest mind in the dance music world. Andrew Weatherall used both to great effect on Primal Scream’s breakthrough Screamadelica, Beth Orton’s Trailer Park, and remixes for My Bloody Valentine, and Björk.

Few artists get to carry the weight of being called a “groundbreaker” in their careers. Charley Pride, the first Black country star, had that honor. He bore the slings and arrows and racial epithets thrown his way with grace and humility.

The key to every Gang of Four recording was the sound of Andy Gill’s guitar. His corrosive sound tore through the group’s debut Entertainment and the following 40 years of lineup changes, attempts at pop success, and crucial studio recordings and live work.

For over seven decades, tenor saxophonist Jimmy Heath never seemed to slow down. From his time working with Dizzy Gillespie in the late ’40s to the recording of his posthumous 2020 album, Love Letter, the Louisiana-born musician worked tirelessly, leaving behind a massive discography and the respect of generations of his fellow jazz artists.

Essential song: “For Minors Only”