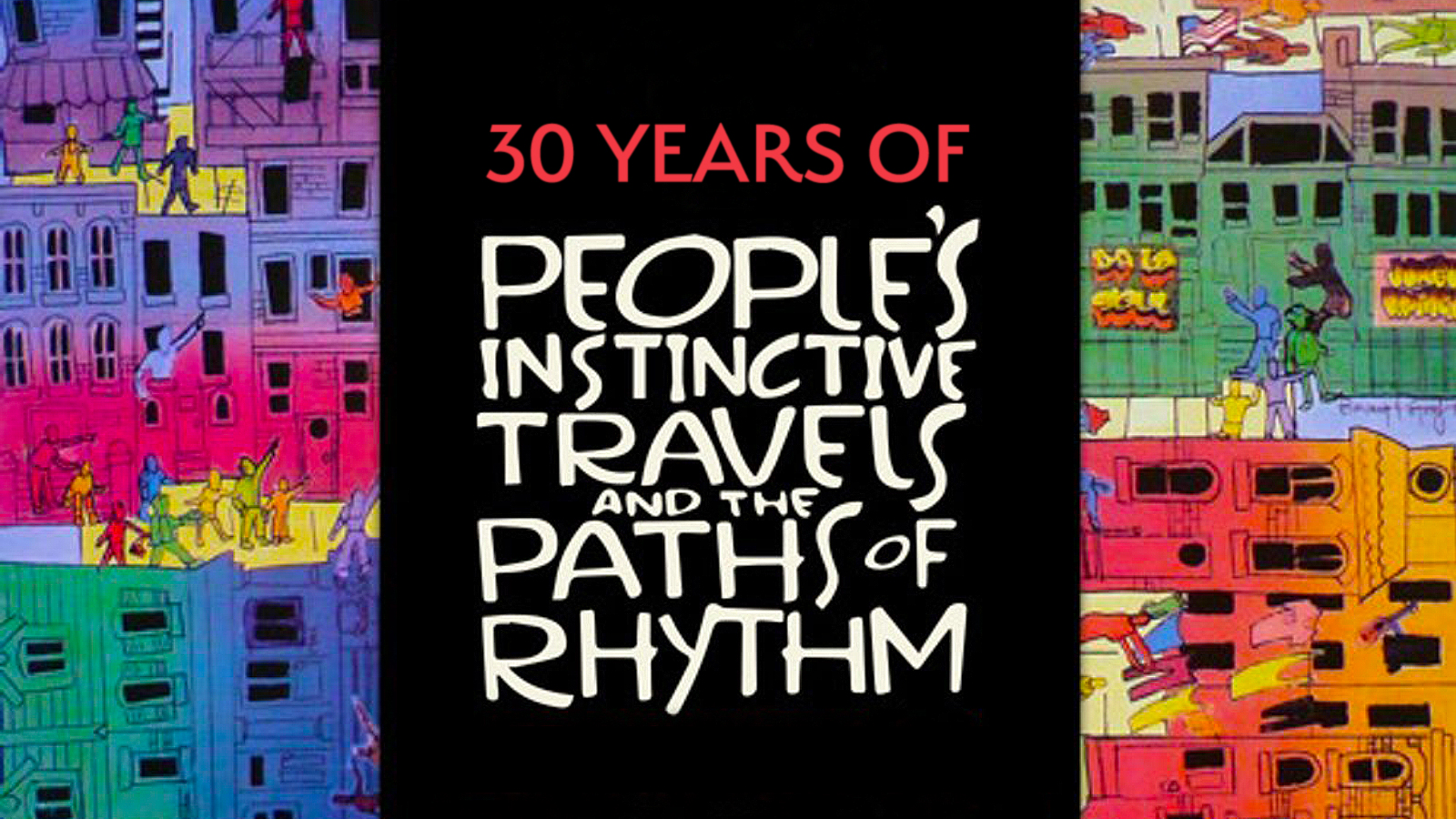 A Tribe Called Quest didn’t debut with People’s Instinctive Travels and The Paths Of Rhythm, they teleported. The mystic wind chimes blanketing the faint cries of a child on the intro track (“Push It Along”) sound as if the arrival of a new sound was impending. Once the album starts, listeners go on a 65-minute journey through decades of music, transmogrifying and stitching together disparate parts of history to create the sound of the future, at the time in 1990.

The album still sounds timeless, and yet, it also sounds impossible to make in 2020. The album we know was born on April 17, 1990, but its skeleton predates the decade. A twelve-year-old Q-Tip started constructing the elemental framework of what would become Tribe’s debut album in 1982 using only a dual cassette deck, tape collection, and unduplicable creativity. The precocious producer would either record an entire sample from one tape onto another or he would record the section of the song he wishes to sample, pause the tape, rewind the song to the start of that section and record again in order to extend the sample. Those completed beat tapes were known as “pause-tapes” and allowed instrumentals to flow unimpeded.

“I did a lot of People’s Instinctive Travels already on pause-tapes before we started recording when I was in the 10th grade at 16-years-old,” Q-Tip told Chairman Mao at Red Bull Music Academy in 2013.

While the production of the album was freshened up over the five years before the album’s release, you can hear the pause tapes’ influence. “Youthful Expression” is simply a four-bar loop of a 10-second section on Reuben Wilson’s 1974 song “The Sweet Life,” a small horn section of Wilson’s song is the instrumental-only chorus on Tribe’s song, and a drum loop. Then there’s “Luck of Lucien,” which is largely the first six seconds of Billy Brooks’ 1974 song “Windows Of the Mind” on loop for the verses and the next 10 seconds looped for the chorus. You can almost hear the stop-and-go recording of the pause tapes in the imperfect transition from the end of “Luck of Lucien”’s chorus back into the verses.

A good four-bar loop is still the foundation of a lot of modern hip-hop, but rap albums don’t sound like People’s Instinctive Travels and The Paths Of Rhythm anymore. How many rap songs this year are a convivial of sound like “Pubic Enemy” or as indomitably funky as “Description of a Fool?” The computerized beat-making of today gives producers the illusion of perfection so they chase it, sterilizing the warmth of a dusty drum loop and adding soulless synth sounds. People’s Instinctive Travels and The Paths Of Rhythm sounds like someone made it in their basement, which imbues it with a homemade feeling that is both relatable and comforting in ways modern hip-hop production hasn’t been in years.

Navigating the Legal Hurdles of Samples

You could debate if the change in production standards would’ve made People’s Instinctive Travels and The Paths Of Rhythm impossible to be made in 2020, but it’s irrefutable that hip-hop being forced to largely abandon sampling is the biggest reason People’s Instinctive Travels and The Paths Of Rhythm couldn’t be made in 2020. Sampling was the lifeblood of early hip-hop production, allowing impoverished Black creatives to make music without access to instruments or tens of thousands of production equipment. Without those samples, there is no PITATPOR.

In December 1991, over 18 months after Tribe’s debut and three months after Tribe reached stardom with the release of their second sample-heavy classic album The Low End Theory, hip-hop changed forever. Biz Markie and his label Cold Chillin’ Records were sued by Grand Upright Music Limited for sampling Raymond “Gilbert” O’Sullivan’s “Alone Again (Naturally)” for Markie’s 1991 album I Need A Haircut. The judge ruled in the favor of Grand Upright Music, comparing Markie’s sampling to theft, and as a result, set a precedent that even the smallest samples need to be cleared by the rights owner in order to be released.

Clearing samples can crumble an entire album’s budget into a mountain of bills. Depending on the era, the average price for clearing a single sample could be as high as $10,000, and that’s just the average sample. Clearing all the samples on PITATPOR would’ve bankrupted the group before they even started to make money. The ebullient horns of Stevie Wonder’s “Sir Duke” open “Footprints”; the brass band intro of The Beatles “All You Need Is Love” eases us into “Luck of Lucien”; Roy Ayers sedative keyboard playing on RAMP’s “Daylight” is the celestial backdrop of “Bonita Applebum”; without Lou Reed immaculate guitar playing for “Walk on the Wild Side” then “Can I Kick It” loses its most defining sound.

The Beatles samples alone are so hard to clear that before the Wu-Tang Clan released its fifth studio album, 2007’s 8 Diagrams, they released a statement celebrating the fact they “cleared the first-ever Beatles sample” on Wu-Tang’s “The Heart Gently Weeps.” In a sign of how rare it is for rap artists to clear The Beatles sample, the group had to later clarify that the song contained an interpolation and not the original version of “While My Guitar Gently Weeps” heard on The Beatles’ White Album. If arguably the most influential hip-hop group of all time had trouble clearing a Beatles sample 14 years into their legacy, it’s almost impossible to think the unproven A Tribe Called Quest newcomers to clear it on their first try, let alone the dozens of other samples that would surely have cost more than the album made their label Jive Records in 1990.

2020 would’ve ripped the samples from People’s Instinctive Travels and The Paths Of Rhythm, and the soul would be missing. Without the soul, is it really a Tribe album? The impossibility of it being made now is why we should cherish the fact it even exists at all. A Tribe Called Quest’s entry into the world represents a time in music history when the sound of hip hop was as boundless as its creator’s imagination.

Keith Nelson Jr.
For nearly a decade, Keith Nelson Jr. has been a critical voice in the music, TV, and culture space. He's a writer by fate, a journalist by passion with bylines at: REVOLT, ONE37PM, Billboard, Vibe Magazine, Okayplayer, REVERB, and LEVEL Mag.
10 Comments