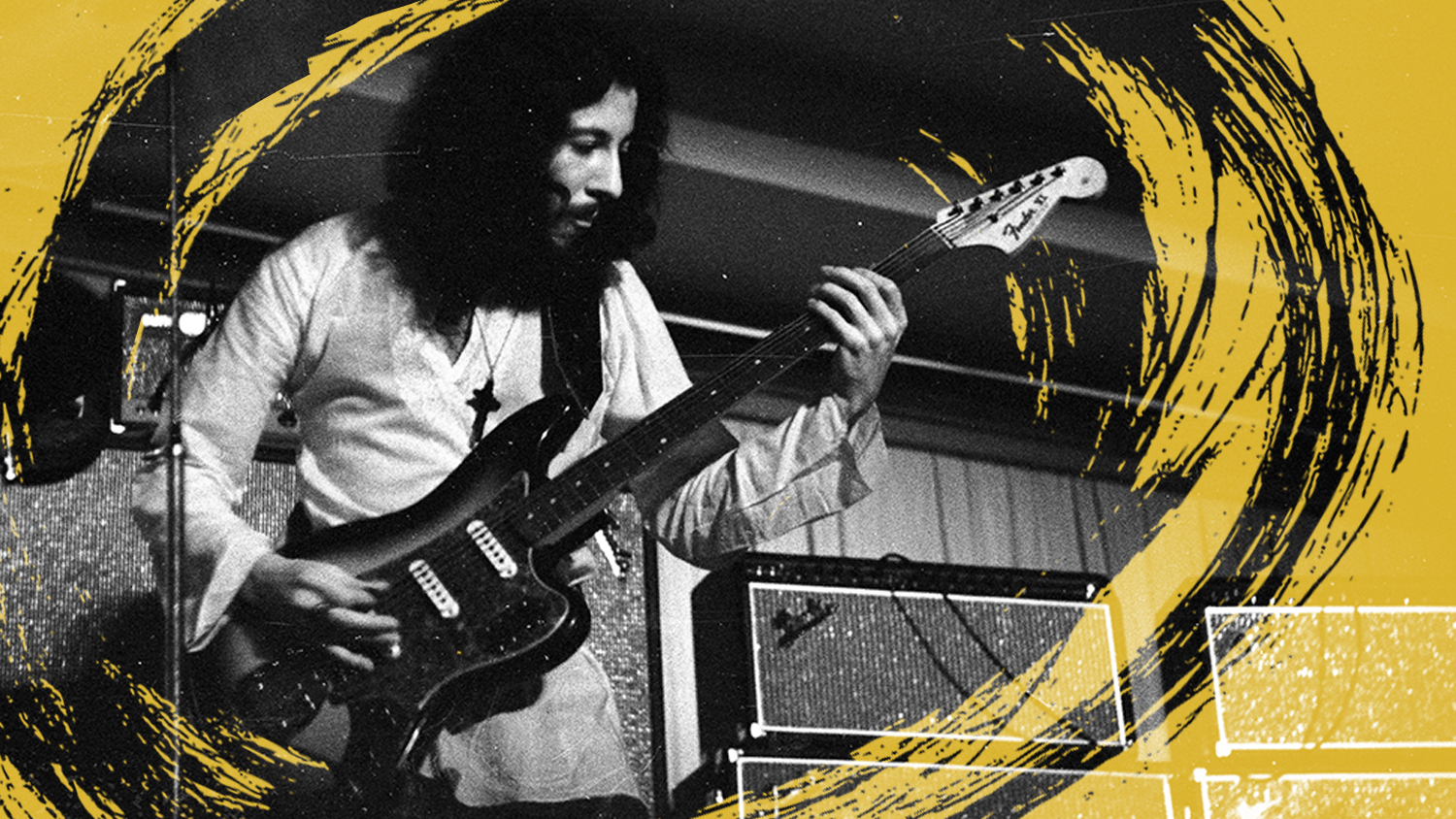 When Fleetwood Mac proclaimed in 1977 that they’d “never break the chain,” one of their links was stranded in the past: Peter Green. His absence still haunts the band. “I’d always get people in the hotel room on tour and say, ‘Now I want you to hear Peter Green,’” their drummer Mick Fleetwood said in 1997. “I’ve cried myself to sleep many a night listening to early Fleetwood Mac and going, ‘What happened to this guy?’”

Here’s what happened to Green: He played in blues combos like Peter B’s Looners and John Mayall’s Bluesbreakers, co-founded Fleetwood Mac, and blessed them with his guitar genius. Gripped by drug-induced schizophrenia, he left the band in 1970, and the Mac carried on for half a century with a succession of guitarists — Danny Kirwan, Bob Welch, Lindsey Buckingham, Mike Campbell, and Neil Finn among them.

Green eventually righted the ship, releasing solo records, playing in his Splinter Group, and living quietly out of the public eye. Now, sadly, the guitarist who slipped out of the Mac 50 years ago has slipped away for good. Green died “peacefully in his sleep” on July 25 as announced by his legal team and reported by The New York Times. He was 73.

Despite being in Fleetwood Mac for only three years and three studio albums, Green’s impact on them is incalculable. He named the band, wrote classics like “Black Magic Woman,” “Albatross,” and “Oh Well,” and sent them off to make million-sellers like 1977’s Rumours. For a crash-course on what made Green great, here are 10 of his essential tracks — with and without the Mac.

“The Supernatural” by John Mayall and the Bluebreakers

During the Summer of Love, Green found himself in the unenviable position of replacing Eric Clapton in the Bluesbreakers. Instead of imitating the guitarist some called “God” — which almost any picker in his position would do — he forged an emotionally naked approach all his own.

“Style is dangerous because if you’re stylized, you’re an accomplished musician after a fashion,” Green explained to The Irish Times in 2001. “What I did was I basic-ed, I rudimented … every day I learn to be a little more style-less.”

On the instrumental “The Supernatural,” one of his two contributions to A Hard Road along with “The Same Way,” Green breaks out of blues orthodoxy and explores spine-tingling new horizons.

Over dreamy, burbling backing — drummer Aynsley Dunbar plays with mallets — Green fires notes into the sky and lets them settle like ash. While he may have been no Clapton at the end of the day, Green’s emotional vulnerability and sense of space made him unlike anyone else.

“So Many Roads” by John Mayall and the Bluesbreakers

Granted, this isn’t a Green original; it’s a train song by Marshall Paul that later became a blues standard. But it’s included here as a sheer guitar showcase.

This version of “So Many Roads” is taken from 2016’s Live in 1967, which contains performances from all manner of clubs, but this one’s from Manor House Ballroom in London.

Despite being only 21 at the time, Green and his ‘59 Les Paul are on fire, making skeptical Clapton stans in the audience eat crow. The rhythm section is literally Fleetwood and Mac; Mayall is on organ, egging on the three.

After his guitar workouts with the Bluesbreakers, Green’s personality came to the forefront on the band’s Peter Green’s Fleetwood Mac. (For any Mac fans unaware of their white-boy-blues beginnings — contrast any song here with “Rhiannon” and be amazed they’re by the same band.)

On the surface, Fleetwood Mac is a typical late-1960s blues record. But throughout, you really get to know Green, whether he’s moaning a Robert Johnson standard over piano by Jeremy Spencer (“Hellhound on My Trail”) or playing like he’s on an after-hours bender (“I Loved Another Woman”).

“Long Grey Mare” is one of his funniest cuts, a suitably unsubtle blues about having a female horse “but she won’t let me ride.” Green’s harp-blowing brings this charming throwaway home.

“Love That Burns” by Fleetwood Mac

Despite plentiful originals by Green and Spencer, Mr. Wonderful isn’t nearly as well-loved as its predecessor. Too much of it is boilerplate blues-rock, and too many horn parts spoiled the pie.

While most of the album can be skipped, don’t throw it all out. As on 13th Floor Elevators’ out-of-gas 1969 goodbye Bull of the Woods, some weatherbeaten gems can be found beneath the overproduction muck.

“Love That Burns” is a smoky burner where the horns actually abet the atmosphere. “The flames of our flesh have stopped burning / And the fire of our love has cooled down,” Green laments between melancholy licks.

“I used to go see the original Fleetwood Mac and they used to kill me, just knock me out,” Carlos Santana said in the 1983 book The Guitar Greats. “To me, they were the best blues band.”

“Woman” was the biggest hit of anything on Abraxas, peaking at No. 4 on the Hot 100. Aside from adding their trademark Latin tint, their version stayed true to Green’s original. When covering “the best blues band,” Santana knew better than to fix what isn’t broken.

There’s almost nothing to “Albatross” — some ethereal guitar, a few cymbal washes, zero vocals. But it clearly caught The Beatles’ ears, because they admitted to ripping it off for “Sun King” from 1969’s Abbey Road.

“At the time, ‘Albatross’ was out, with all the reverb on guitar,” George Harrison later said. “So we said, ‘Let’s be Fleetwood Mac doing ‘Albatross,’ just to get going.’ It never really sounded like Fleetwood Mac … but that was the point of origin.”

Actually, George, “Sun King” does sound like “Albatross” — albeit lifted to heaven via sublime harmonies. And through a glass, darkly, it blueprints the Mac’s future, foreshadowing the dreamscapes of 1987’s Tango in the Night.

“Man of the World” by Fleetwood Mac

The spare guitar doodle “Man of the World” is Green’s calling card; it lays his lost soul bare. “I’ve flown across every tide and I’ve seen lots of pretty girls,” he sings. “I guess I’ve got everything I need / I wouldn’t ask for more.”

But all the babes in all the world are cold comfort: “There’s no one I’d rather be,” he clarifies, “but I just wish that I’d never been born.” Oof.

While no hit Stateside, “Man of the World” was an accurate enough assessment of Green’s psychology for Steve Graham to name a 2009 documentary after it. “The guitar used to speak for me, but I can’t let it do that for me anymore,” Green said in the film. “I can’t let it break my heart again.”

It’s touching to watch Green triumphantly shred “Man of the World” as an older man, as if he faced down its abundant demons and emerged victorious.

For an encapsulation of everything this guitarist could do, look no further than Then Play On, Fleetwood Mac’s first departure from the blues and their only album with the dream-team of Kirwan and Green.

Among its lopsided jams, the twisting “Rattlesnake Shake” is a highlight — live, it would sometimes clock in at half an hour. Green reportedly wrote its risqué lyrics as a dig at Fleetwood and his propensity for self-love.

“I’m named in it as the guy who does the rattlesnake shake,” he Fleetwood wrote in his 2014 memoir, Play On. “To jerk away my sadness whenever I don’t have a chick. That was an appropriate immortalization of my younger self, to be sure.”

“Rattlesnake Shake” captures how the early Mac was born to make a crowd move. Take it from Ian Anderson of Jethro Tull, who cut their teeth in the same clubs in the same era.

“He was an inspiration when Tull started at the Marquee Club in early 1968,” Anderson wrote in a 2020 tribute to Green. “He showed what you might do with the blues genre to personalize and develop the feel with such great songs as … ‘Rattlesnake Shake.’”

“Oh Well” influenced virtually everybody. AC/DC nicked its nifty hammer-ons for “Beating Around the Bush.” Haim covered it. Not to mention Tom Petty and the Heartbreakers, Jimmy Page with the Black Crowes, Jason Isbell and the 400 Unit — the list goes on.

This perennial favorite was of the last songs Green wrote for Fleetwood Mac, and he had his druthers about it. “The best bit was part two on the other side of the record, he told Mojo in 1996. “You miss the best bit, the Spanish guitar break.”

Why is “Oh Well” such a concert go-to? As a guitar exercise, it just feels good, man. (These days, it’s Mike Campbell’s showcase during Fleetwood Mac gigs.)

Fleetwood thought the song would go over like a lead balloon. He was wrong — anyone with a pulse can respond to its unforgettable riff and self-deprecating lyric. “I can’t sing, I ain’t pretty and my legs are thin,” Green sings. But as he reveals, he’s got God on his side.

“The Green Manalishi (With the Two-Prong Crown)” by Fleetwood Mac

The final song Green wrote for Fleetwood Mac is a denunciation of greed that reflects his declining mental state. Driven by LSD-induced nightmares of a green dog symbolizing money, he began wearing robes and giving away his finances. To that end, “The Green Manalishi” is his anti-capitalist mission statement.

“I want to change my whole life, really,” Green told NME at the time. “I don’t want to be at all a part of the conditioned world, and as much as possible, I am getting out of it.”

It’s a shame that Green left the band he formed in 1970, because “The Green Manalishi (With the Two-Prong Crown)” shows how the band could have evolved into King Crimson-style prog giants under his watch.

Post-Green, Fleetwood Mac entered an awkward liminal stage, making forgotten albums like 1972’s Bare Trees. But the thunder of songs like “The Green Manalishi” is why we can’t stop talking about him 50 years on.