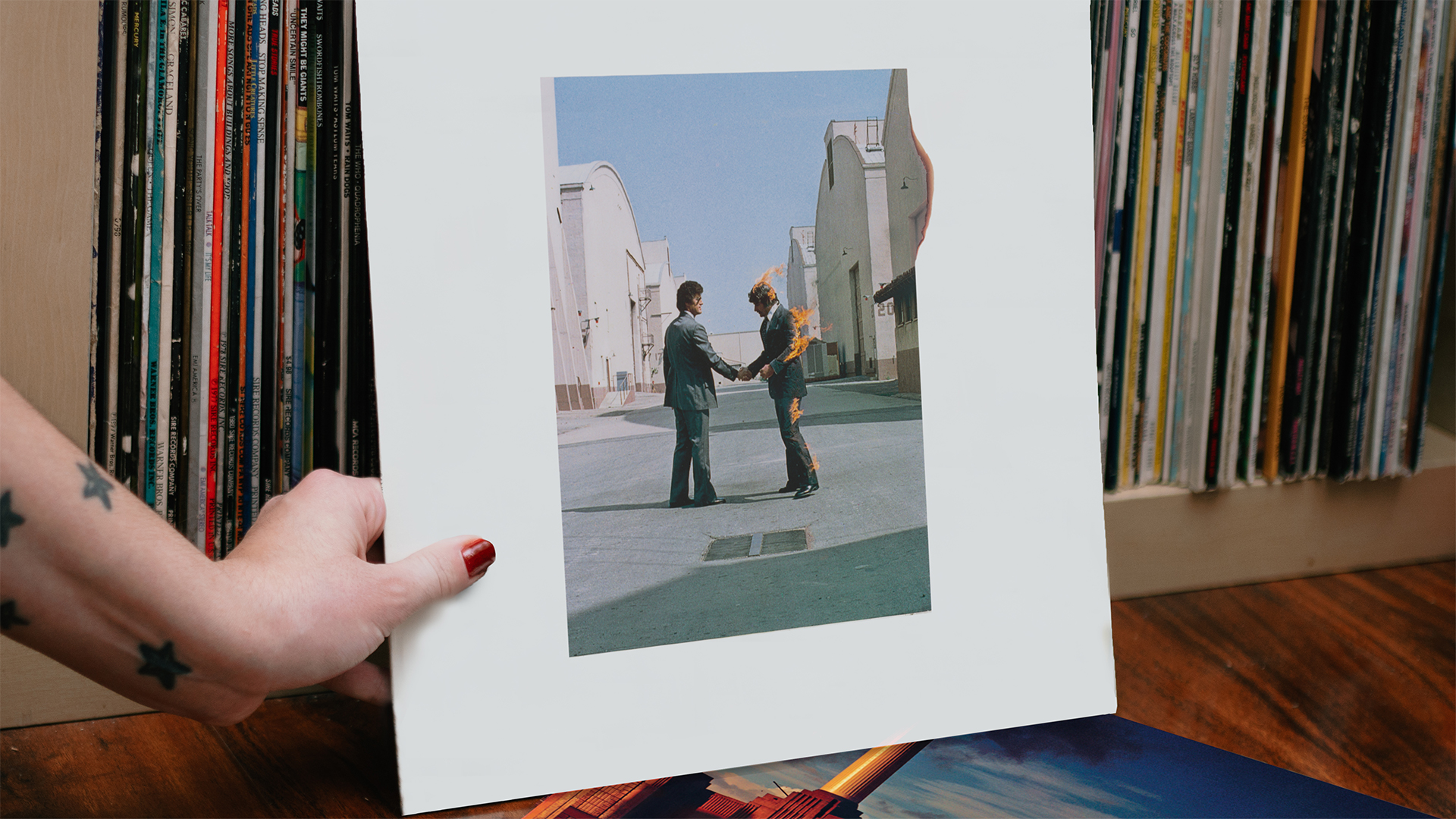 I woke up this morning to a burnt orange sky and thoughts of a slow apocalypse. What better time to listen to Pink Floyd’s Wish You Were Here for the first time?

This isn’t my Pink Floyd introduction. At seven years old, when I was obsessed with The Wizard of Oz, my mom sat me down for a showing of Dark Side of the Rainbow. In rock music, you might say I was classically trained.

I was about 15 when my mom gave me Pink Floyd’s The Wall on CD.

“Listen to this with headphones,” she said, looking very serious. “It tells a whole story. There’s a movie, but it’s better that you listen to it first.”

A few weeks went by before I found the right time. When I couldn’t sleep, I loaded the shiny disc into my silver Walkman, pressed play, and closed my eyes. 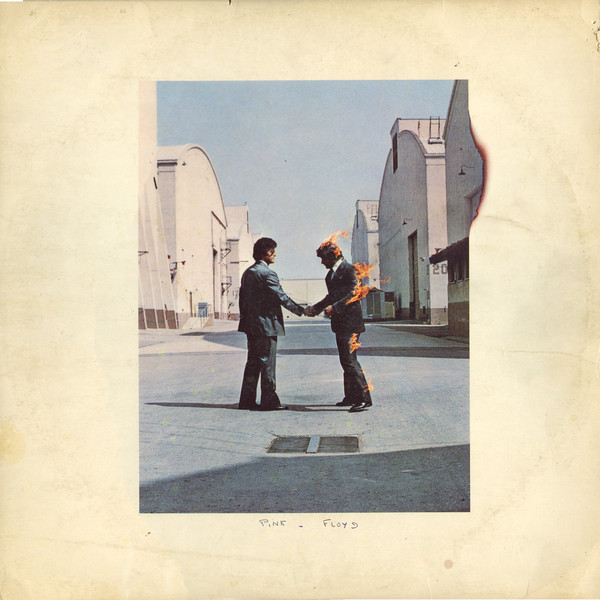 My mother was right. A whole sordid lifetime flashed inside my mind. It was mesmerizing and horrific. The next day, I stood in the school lunch line with vacant eyes. “How can I have any pudding if I don’t eat my meat?” I wondered as my Spanish teacher couldn’t be heard over my internal chant to “tear down the wall.”

Come freshman year of college, I furthered my education with a popular music course. The hip professor spent a day explaining how pretty much every Pink Floyd album after Syd Barrett’s departure could be interpreted as a letter to the lead singer. The band’s whole career centered around themes of insanity, disillusionment, and loneliness.

As far as titles go, Wish You Were Here fits that bill most obviously. As much as I love bringing that fact up at parties, I’d never listened to this album start to finish.

I queued the LP on Spotify and was stunned. It’s only five tracks? Two of them are “Shine On You Crazy Diamond?” Unbelievable. I’ve probably heard “Wish You Were Here” more than I’ve heard “Happy Birthday.” “Welcome to the Machine” and “Have a Cigar” are staples. Is it even fair to say I haven’t heard this album?

Just as I needed to sit in the dark and let The Wall build around me, no partial pick-and-play can cast a shadow against the brilliance of this gem. Wish You Were Here opens with subtle glory. First, there is darkness. Then, a tiny light. Synthetic organs hum in the vastness of empty space. Twinkling chimes and ghostly chords swirl like nebulae as the ever-expanding universe filled my mind’s eye. It’s Genesis set to mood music, then that guitar so full of longing. The universe is lonely, too.

I’ve heard “Shine On You Crazy Diamond” a million times, but never like this. Pink Floyd are masters of production and technique, yet we take that for granted every time they play on the radio. Hearing these guitars burst like a supernova in my ear, each layer unfolding like a flower, what had become cliché became illuminated fact.

Six minutes in, my spirit left my body behind. Total escapism engaged. Eight minutes, and I swore the guitar was talking. Nearly nine minutes, and Roger Waters makes his entrance. I know there’s a real homage to Barrett here, but it feels like he’s talking to every world-worn adult on the planet. Who hasn’t been ground down by the steel breeze of 2020?

I drift away on that raspy sax solo, soaring over the clear counter melody as we explore the night. Then the transition comes, and I start to feel dread rise from my stomach to my throat. The humming drone of this “machine” takes over. I watch the saxophone fade smaller into the distance and wish I could go with it.

I’ve been left alone in some dark factory. It pulses with tension, sporadically punctuated by jarring noises that pop out in all directions. The guitar offers some melodic relief, and when David Gilmour sings, “You bought a guitar to punish your mom,” it actually makes me chuckle.

Everyone’s story is the same in this capitalist nightmare. They told us how to feel and what to dream. To think they’re singing of this in 1975. Nothing has changed.

There’s such beautiful tension between the hopeful guitar and the menacing sonic miasma. You’re wide-eyed at the thought of steak bars and jaguars, but this song sounds shady for a reason. “The business” is not a place of art and altruism. Just look at the cover art. One of these Hollywood guys is on fire.

My heart races as the song rushes into transition, confusion as people start talking and laughing in my ears. Are they laughing at me? Is a show about to begin? Now silence.

The guitar noise alone signifies that something swaggering this way comes. “Have a Cigar” is the confident and dirty sound of a coked-up label executive in a fancy suit. He swivels on his chair behind his desk, passing out glasses of whiskey and talking too fast for you to answer. The chorus swirls out into psychedelic fantasy, surreal and shiny but degraded on the inside. I laugh again at the line, “Which one’s Pink?”

Again, the band excels at balancing skepticism and tantalization. It’s sinister and alluring before rushing out into another trippy stereo trick. The song is now playing not in my headphones but on a radio to my right. I’m in some cabin or something, noodling with the dial. Someone’s parents talk about “disciplinary” measures and “not this star nonsense.”

Another warble of white noise and the chords of the familiar title track punch me in the gut. Tears well in my eyes for whatever reason. A man coughs, somehow from behind me, shockingly real. Our best friend the guitar is back, hard and clear and nearby, as if in this very room.

I’ve heard this song a million times, covered by everyone from goth cellist trio Rasputina to throaty country-popper Miley Cyrus. Ubiquitous as it is, “Wish You Were Here” becomes ever more massive in context. This whole journey has been dark and twisted, but this song hugs me like a warm, welcoming glow. It’s sitting by the fire, my mom coming over with a glass of cocoa. Everything being okay.

Five minutes goes by in no time. Once again, the song leaves for the horizon, this time stranding me in a harsh, windy snowstorm. Thumping bass breaks through the mist, something to walk toward. It’s time to “Shine On” once more.

Slick synths meet strong-willed bass and drum lines, feeling like a standoff. We’re stronger now, but we’re also tired, wandering some filthy city at night. The streets shine with old rain and wet garbage, reflecting red and yellow and blue neon signs. The beat picks up as we walk past pimps and pushers, a few wild-eyed street dwellers talking to themselves. I wonder if I should be scared of them, but then I think, if I’ve come this far, I must be scary, too. Everyone here is the same level of weird and dangerous.

Back to that soaring melodic groove. The high has hit, we’re drifting upward, and our body is gone once again.

“Nobody knows where you are, how near or how far.” I’ll be joining you there, soon.

Jazzy refrain takes hold, shaking off the sickly sadness of that noir scene. Funky, cocky, cool, the final track wanders in reverse, coming full circle to the extraterrestrial sound of the beginning. I’m floating in space, leaving the Earth and that tale of mortal strangeness behind.

It all feels very grand, a reminder that each life is a self-contained movie. The drama feels really important when it’s running, and when it ends, the universe just continues, stretching as the credits roll. Perhaps all life is rather insignificant, and therefore my troubles, trials, and triumphs. Like these synthetic horns, it all just turns into cosmic dust. We all shine equally bright, each of us stars, and there is peace in that shimmering realization.

And just like that, the music fades out, all glittery and calm, and I go about the rest of my day.