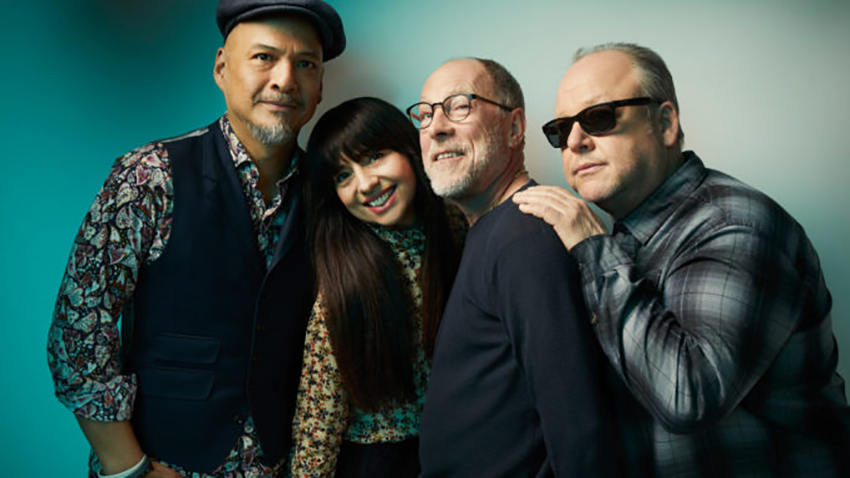 The Pixies are one of the most influential and unlikely rock bands in history. The Boston foursome came out swinging and burned out quick, imploding after five releases in four years only to become wildly popular a decade after falling apart, eventually releasing a follow-up LP 20 years later.

Its sound came together in the late ’80s; frenetic and rooted in diabolical insanity. Frontman Black Francis had all the snot-nosed attitude of a kid in the back of class too smart to take anything serious. The original lineup pit Francis’ surrealist lyrics about uncomfortable material against the perfect rage of guitarist Joey Santiago, the driving drums of David Lovering, and the girlish backing vocals of smooth bassist Kim Deal. The Pixies’ blend of melodic sweetness and chaotic noise is married with a signature quiet-loud dynamic that made them a high-grade influence on Nirvana, Radiohead, Smashing Pumpkins, Weezer and basically anyone who grabbed a guitar after 1990.

The band’s history can be broken into two distinct chapters, read either as before and after Deal, or before and after the break up of 1993. Both are one and the same, though the original bassist returned to the Pixies stage for 10 years of reunion tours from 2004 to 2013. Deal left in 2013 and was replaced by permanent member Paz Lenchantin in 2016. The Pixies have released three albums in its post period, and the 20 years between records can be felt in mellower sounds and less-taboo subject matter.

It’s a wild tale best told through the music. This is the Pixies by the records. The Pixies’ debut mini LP is a lo-fi exploration of a modern soul’s battle for escapism. It’s a steady clash of catchy melodies, experimental delivery and manic expression, set to a backbone of gurgling electric guitar. Eight of 17 songs from the so-called “Purple Tape” demo were remixed rather than re-recorded, so as to maintain the band’s raw first-take energy. Come On Pilgrim sets the blueprint for the Pixies’ sound, right from Francis’ throat-ripping scream of “repent” on opening classic “Caribou,” to swirling chaotic breaks and constant pulsing drums on “Vamos (Pilgrim).”. Lyrical themes of biblical guilt and insatiable sexual appetite appear on “The Holiday Song” and “I’ve Been Tired,” as well as incest perversion on “Nimrod’s Son.” So, too, begin the bilingual Spanglish element, influenced by Francis’ stint as a University exchange student in Puerto Rico. Completed in two weeks and released six months after its predecessor, Surfer Rosa was produced by Steve Albini and builds on the Pixies’ inherent themes and bilingualism. It’s 13 piss-taking, rowdy cuts include themes of self-destruction, ever-more irreverent tones and increasingly experimental recording techniques (like recording Deal’s voice in the bathroom on megahits “Where Is My Mind?” and “Gigantic,” or running Francis’ vocal through a guitar amp on “Something Against You”). The sound is rounder but still raw and caustic, finding humor in taboo. “Bone Machine” tackles infidelity and pedophiliac priests. Francis explores lyrical minimalism on “Something Against You,” “Broken Face,” and “Brick Is Red,” the latter of which has a clear influence on Nirvana’s writing. The LP also features quirky bits of between-take studio banter, including a violent foreshadowing of arguments between Francis and Deal to come on “Oh My Golly!” Armed with a $40,000 budget (quadruple that of Surfer Rosa), the Pixies’ third album begat its cleanest production yet. The fresh sound is juxtaposed by the band’s constant obsession with dark subject matter, from more Biblical violence (“Dead,” “Gouge Away”) to suicide (“Wave of Mutilation”), and Climate Change-driven apocalypse (“Monkey Gone To Heaven,” “Mr. Grieves”). Producer Gil Norton pushed the band toward a more commercial sound, and though Francis pushed back, the album sees more traditional structures on “Here Comes Your Man” and the R&B-inspired “Hey.” “Here Comes Your Man” and “Monkey Gone To Heaven” became the Pixies’ first US radio hits. The album begins with a nod to surrealist artist Dali’s film Un Chien Analuu on “Debaser,” setting a tone for the amorphous. Deal continued to push for creative input, but Francis fought her back and the relationship soured. Francis famously threw a guitar at Deal on stage in Stuttgart, Germany, and she refused to play the next day in Frankfurt, almost being fired. The band went on hiatus while Deal formed her band The Breeders. Francis, Santiago and Lovering reconvened in Los Angeles in January or 1990, while Deal eventually joined for a few weeks of recording. Bossanova was again produced by Norton and features his love of heavy-reverb. Francis greatly improvised the writing in studio, sometimes penning lyrics on a napkin minutes before laying them down. That lack of intention is felt in the album’s often lower-level energy, though “Rock Music” is a crashing high point. Bossanova weaves nonsensical stories of jazz artists and ex-girlfriends with vague themes of interstellar bodies, a theme most present on alien seduction single “Velouria” and “The Happening.” Bossanova leans heavily on surf rock (“Cecilia Ann,” “Ana”), as well as references to other bands including Talking Heads (“Dig For Fire”), Neil Young (“Blown Away”), and the Rolling Stones (“Hang Wire”). This rowdy return-to-form served as the Pixies’ unplanned finale for 13 years. Jokingly referred to as Francis’ solo debut, Deal took a highly-reduced role. Produced by Norton, many songs were recorded while they were still being written. Francis and Norton argued in the open, as did other band members. The title translates from French as “Fool The World,” but everyone could see the game of pretend was almost up. Still, Trompe le Monde is energetic and cheeky, full of classic Francis screams on “Planet of Sound” and “The Sad Punk.” The lyrics are strange and meaningless, not so abominable but certainly sarcastic on the self-aware “U-Mass” and “Subbacultcha.” It includes a cover of Jesus and Mary Chain hit “Head On,” which also became a hit for Pixies. The band accepted an offer to open for U2, but there was no success on the horizon. In 1993, Francis announced on TV that the Pixies project was over. He hadn’t yet told the band. The Pixies spent the next decade performing in various projects, including Deal’s The Breeders and Francis’ Frank Black and the Catholics. Reunion rumors swirled for years, and when the original foursome finally announced a tour in 2004, every show sold out. A new album didn’t come until Deal left again. A series of EPs became Indie Cindy in 2014. The 12-track album is the first Pixies LP without Deal, though her voice is often mimicked. It plays like a mature Pixies’ record might. Standout single “Bagboy” is the most like older tracks, full of chunky guitar and Francis’ twisted speak-singing. Old lyrical themes of bilingualism, mystical surrealism, sexual innuendo and aliens come through, though in less bizarre presentations. Songs play longer at an average of three-and-a-half minutes, with more traditional song structures and less crazed, even ballad-like energy. Another switch brought touring bassist Paz Lenchantin (of A Perfect Circle) in as a permanent member. She adds very Deal-esque backing vocals to the LP, and even takes lead on “All I Think About Is Now,” written by Francis as a retrospective thank-you to Deal. The album title is a reference to St. Denis of Paris, a saint often pictured carrying his own dismembered head, while it’s lyrics make a number of references to French culture. The album also sees a new producer in Tom Dalgety. It’s a return to form in the sense that more than half the songs are less than three-minutes long, but Francis keeps a tune in his voice more than a growl while the band explores more melodic hooks on “Classic Masher,” “Might As Well Be Gone,” and “Bel Esprit.” Those looking for the old spirit will find some in Santiago’s lead rips, the 1-minute 54-second “Baal’s Back,” industry-satire “Talent,” and desert headbanger “Um Chagga Lagga.” Produced by Dalgety, Beneath the Eyrie was recorded in a converted church in upstate New York. The strange surrounding influenced the sound of the tracks. It plays into goth tropes on opener “In The Arms Of Mrs. Mark of Cain,” and showcases a darker shade of the surf rock seen on Bossanova. The single “Catfish Kate” harks to some of the Pixies more melodic old cuts, while “This Is My Fate” is playfully eery, like a saloon full of skeletons. Francis’ lyrics are delivered in poetic flair. Many of the songs include ghostly images and mortal narrations, from the witching hours of “On Graveyard Hill” to the scream-ridden “St. Nazaire.” It also features two back-to-back songs largely written by Lenchantin, “Long Rider” and “Los Surfers Muertos” about friends of hers who passed in surfing accidents.

Produced in partnership with BMG.