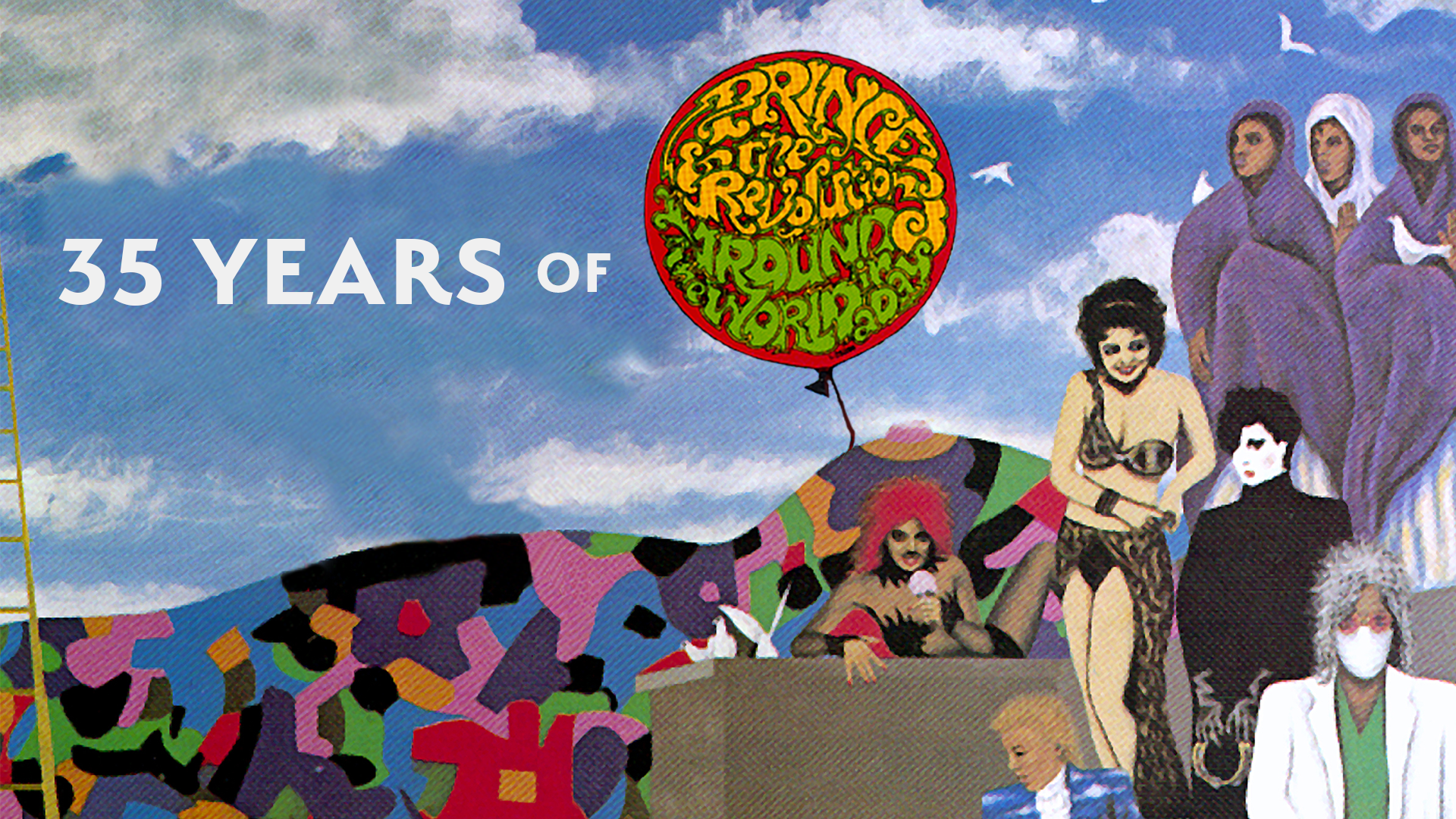 By the mid-1980s, Prince had entered the stratosphere few could penetrate. The success the previous year of his star making film Purple Rain proved that the one-named wonder could be compelling on an international scale across both screen and recorded mediums. The accompanying soundtrack album had produced a myriad of global hits, showcased Prince’s virtuosity as an artist, won multiple awards, and, with the help of the new music video channel MTV, made the native Minnesotan a household name. Purple Rain was Prince’s first number one LP in the US and charted in the top 20 around the globe. Expectations were high for what the Purple One would release for the follow up to such an explosive event.

On April 22, 1985, Prince made the world wait no more for the answer, as he dropped his seventh studio album, Around the World in a Day.

It was the first record released through Prince’s own Paisley Park imprint through the larger Warner Brothers label, and showed Prince using his new leverage to control not only the recorded elements of the project, but the actual marketing campaign and rollout of promotion for the new offering.

While Purple Rain was omnipresent on radio, in stores, and on tv, and consisted of a massive and evolving list of singles, press, and visibility, Prince requested the opposite for the new album. Only the most minimal information of the record’s arrival graced both the commercial and industry publications. Traditionally, singles from a forthcoming album would be released a month or more before the entire record dropped into stores, the hope is that the appetite would be whet for a full serving of an artist’s fresh material while also picking up some additional cheddar from sales of the individual song. But Prince (not surprisingly) insisted that the full-length LP be available for fans for an entire month before any tantalizing tastes of highlighted tracks be released for public consumption.

An Album Without a Single

The modest PR push and the lag time between the album’s appearance in stores and singles hitting airwaves forced fans during the first weeks of the release to buy the record based solely on their love for Prince, not because of any catchy hit they had heard on the radio. This was a radical and unexpected strategy, especially with pressure so high after the mega Purple Rain, in some ways the ultimate punk rock move, forcing the audience to believe in the art created by the artist without a preview of exactly what they were purchasing, while also possibly portraying an assertive arrogance- I am Prince after all- of course this material will be great- DUH. Prince And The Revolution ‎– Around The World In A Day

The ideas that made up Around The World In A Day had been buzzing around Prince’s arguably overactive brain before the well-calculated, well-thought-out extravaganza that was Purple Rain. Lisa and Wendy, members of his band, The Revolution (and forever immortalized on Rain’s “Computer Blue“) brought a demo into Prince. Recorded by their respective brothers- David Coleman and Jonathan Melvoin– the tracks were loaded with strings, flutes and open psychedelic shimmer, sounds that Prince found incredibly appealing. These influences founded the core of what would become Around The World In A Day. Sessions to shape the successor to Purple Rain began prior to Rain’s release- hence in advance of any reaction to what would be Prince’s biggest album ever. This makes the contrasts between Purple Rain and Around The World In A Day that much more astounding. While Prince could have used Around The World In A Day to further cement his genius as a badass guitar hero and sexy lyrical provocateur to fans and critics alike, he instead made a dramatic creative change, sculpting an album that, while featuring some classic pop tracks, also captures a more personal, reflective artist, grappling with superstardom, adoration, and his own innovation.

Though Around The World In A Day was completed on Christmas Eve of 1984, the lead single, “Raspberry Beret” had been originally recorded in 1982. Prince re-worked the arrangements, adding finger cymbals, harmonica and strings before including it on Around The World In A Day. While “Beret” offers the kind of fun sing-along fans wanted and expected post-Rain, the track was an example of the varied styles and experimentation apparent within Around The World In A Day instead of an introduction to a further easily accessible pop. Only the second single, the razor-sharp critique of fame “Pop Life” (‘What you putting in your nose? /Is that where all your money goes?’ ‘Everybody wants to be on top / But life it ain’t real funky /Unless it’s got that pop’) supplies the only other obvious radio friendly hit. From the rainbow sherbet painting adorning the cover of Around The World In A Day the swirling Middle Eastern flutes that open the title track, this album highlights Prince’s dedication to pushing himself and his fans to explore and engage with unexpected ideas instead of relying on accessible, hooky tunes to maintain his iconic status. Indeed, Prince supplies a utopian soundscape on track “Paisley Park” with lyrics (‘The girl on the seesaw is laughing /For love is the colour’) more reminiscent of Marlo Thomas’ 1972 Free to be…You and Me than of the self-loving protagonist of ‘Darling Nikki’ featured on Rain.

The “Purple Rain” track had planted Prince firmly as public enemy number one for the newly formed Parents Music Resource Center (PMRC), led by Elizabeth ‘Tipper’ Gore, wife of US democratic politician Al Gore. The PMRC wanted to put parental advisory stickers on albums with “explicit” content; much of Prince’s work could fall under this banner, framing him as a dangerous menace to young listeners. Though Around the World In A Day track “Temptation” does continue to showcase Prince’s seeming insatiable sexual appetite (‘Temptation / Working my body with a hot flash of animal lust’) it is more an illustration of one part of the Prince persona, an eight-minute bump and grind chocka with mean guitar prowess and vocal howls, not a meandering menace to children. Six-minute plus ballad “Condition of the Heart” shows Prince as a confirmed hopeless romantic (‘Love, it only seems to buy a /Terminal condition of the heart’), while Side A closer “Tambourine” is funk freak-out impossible to not at least head bob to, its sensual whistles and allusions of masturbation – playing the tambourine (‘All alone by myself /Me and I play my tambourine’)- providing an option for release instead of one night stands while one waits for true love.

Around the World In A Day went on to sell over 2 million copies in the US and was the second album by Prince and the Revolution to top the Billboard charts. Though there are clear elements reminiscent of previous Prince albums- the incredible guitar work, some of the syncopated drum machine beats- many of the fans garnered via Purple Rain were confused by the Haight-Ashbury flavoured elements sprinkled throughout the newer LP. Critics were equally divided. Robert Palmer of The New Yorker put Around the World on par with The Beatles Sgt. Pepper’s Lonely Hearts Club Band, proclaiming Prince’s offering ‘ambitious, complex and stylistically diverse but at the same time a unified whole – a ”concept album.”’ Other established journos were not as positive, with Robert Christgau giving it a ‘B-‘ in his legendary Consumer Guide, supporting the lacklustre rating with the commentary, ‘It’s pretty strange, given that he looked like a visionary not long ago.’

Like many things in life, Around the World may be viewed differently 35 years after its release. Prince could have used the album to build on his sexual, dangerous bad boy guitar playing image so perfectly presented in Purple Rain and so appealing especially to the teen market. Instead, the varied themes, musicality and exploration across tracks on the LP show an artist willing- wanting- to be more than an easily consumable product, pushing his own ability to not only make and experiment with different sounds and ideas, but to bring his audience along on the journey.