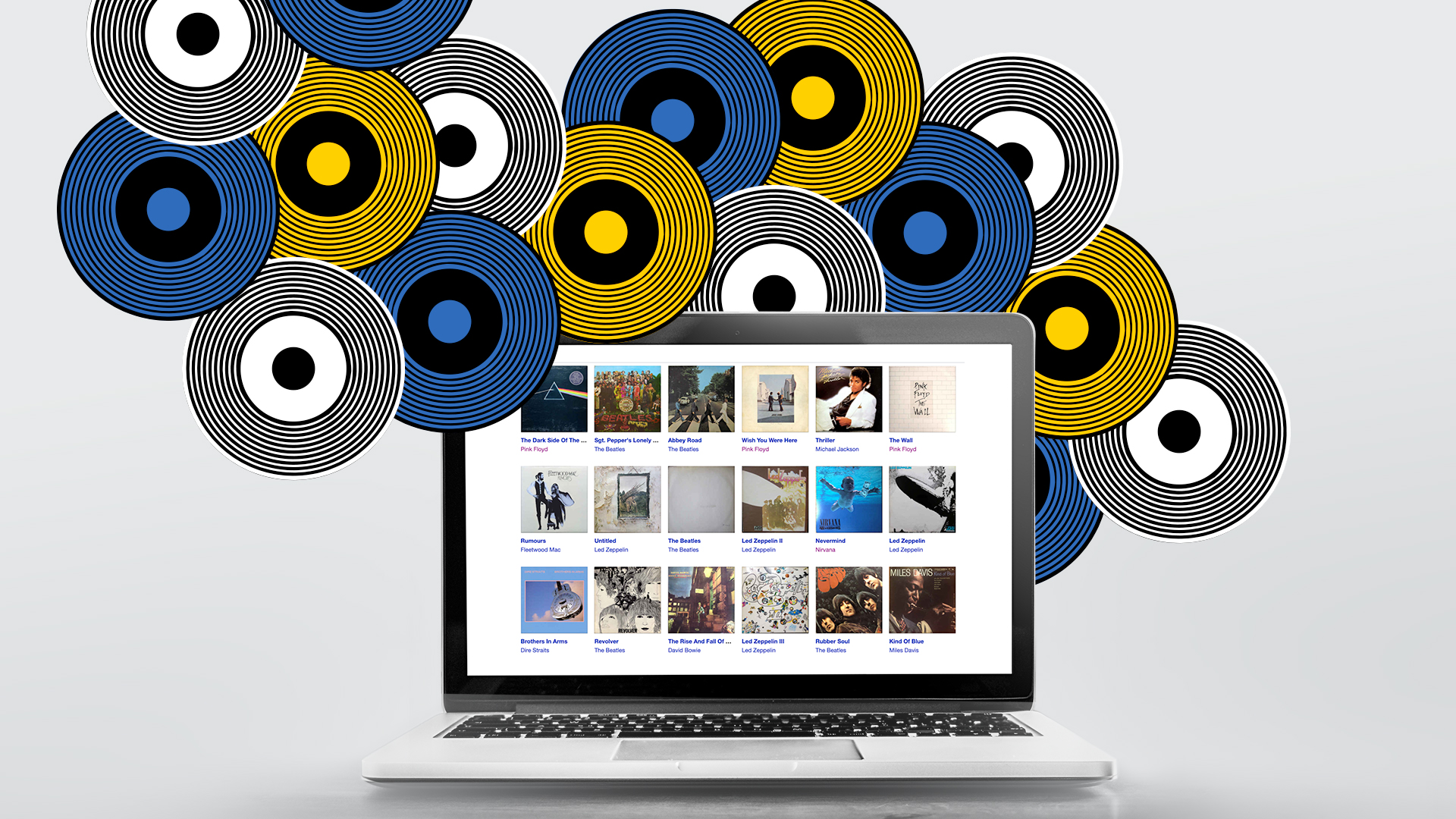 Discogs is the largest database of recorded music in the world. This global community of music fans just surpassed an impressive milestone: 3 million collectors cataloged more than 500 million of their music releases on Discogs.com — nearly double the number of releases logged in 2019 alone.

In the past decade, Discogs experienced consistent growth in the number of new people using the website’s Collection feature to catalog their physical music. The COVID-19 pandemic undeniably accelerated interest in the value of — and passion for — recorded music. As the world spent more time at home in 2020, the number of music fans using Discogs to catalog their collections grew by 40% over the previous year.

Fueled by the increase in new music fans discovering records and established fans rediscovering their collections, vinyl continues to thrive as an enduring symbol of the Discogs Community’s love for music. With millions of people using the site’s Collection capabilities, we wanted to dig into how the Community uses this powerful tool.

By analyzing Collections in the Database, Discogs found compelling insights into how many releases people collect, the average value of these collections, and which albums are most collected around the world. Through a series of surveys to Discogs’ most engaged fans, we also uncovered details surrounding what, why, and how people embrace their collections. How do they organize their music? Do they prefer color vinyl over standard black? And what other kinds of record variants do they collect? What follows is a snapshot of the typical visitor to Discogs right now. 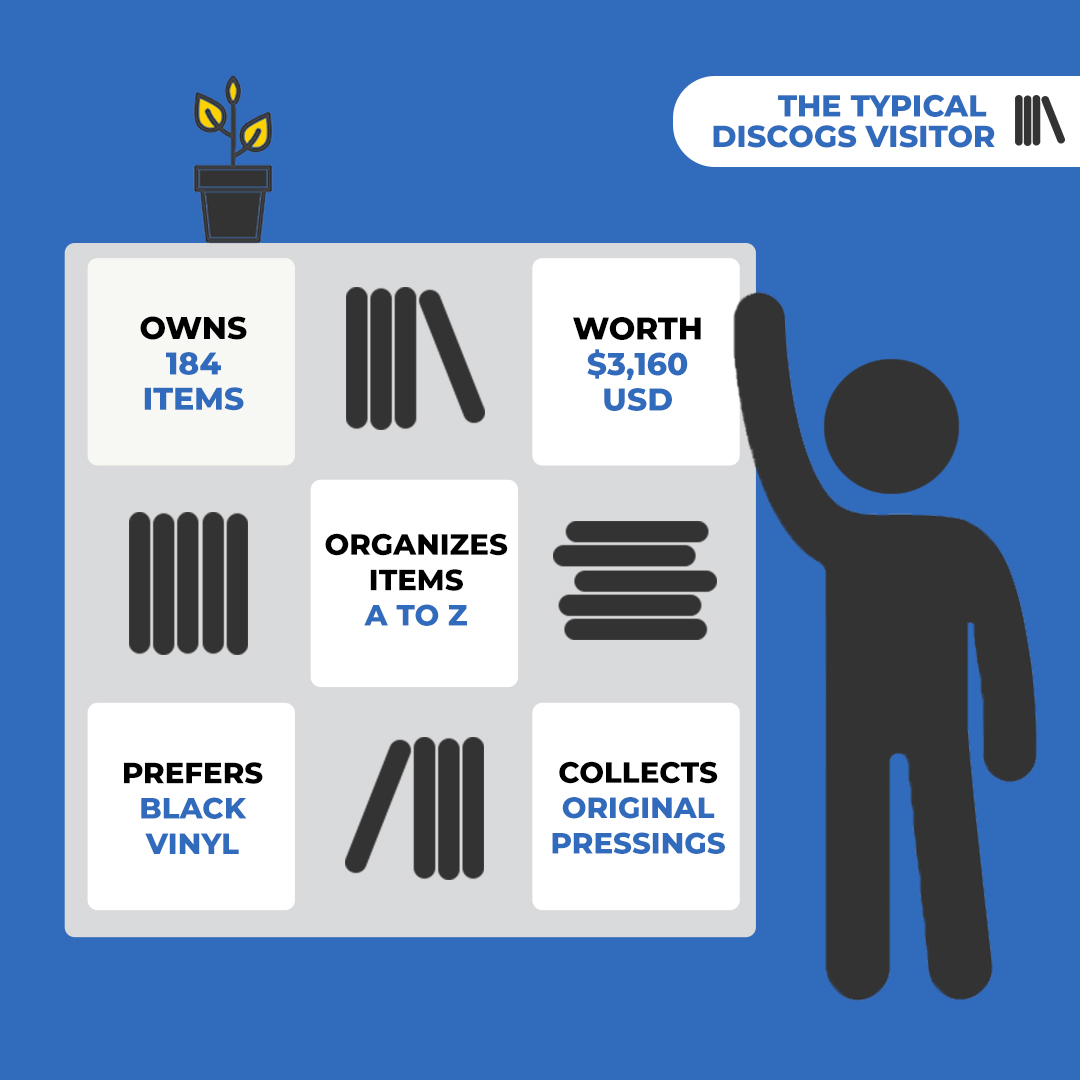 How Big Is Your Music Collection?

On average, the 3 million collectors on Discogs, defined by the number of users who added at least one item in their Collections, have 184 releases. The largest individual collector on Discogs has more than 512,279 releases — 2,780 times the average collection size. 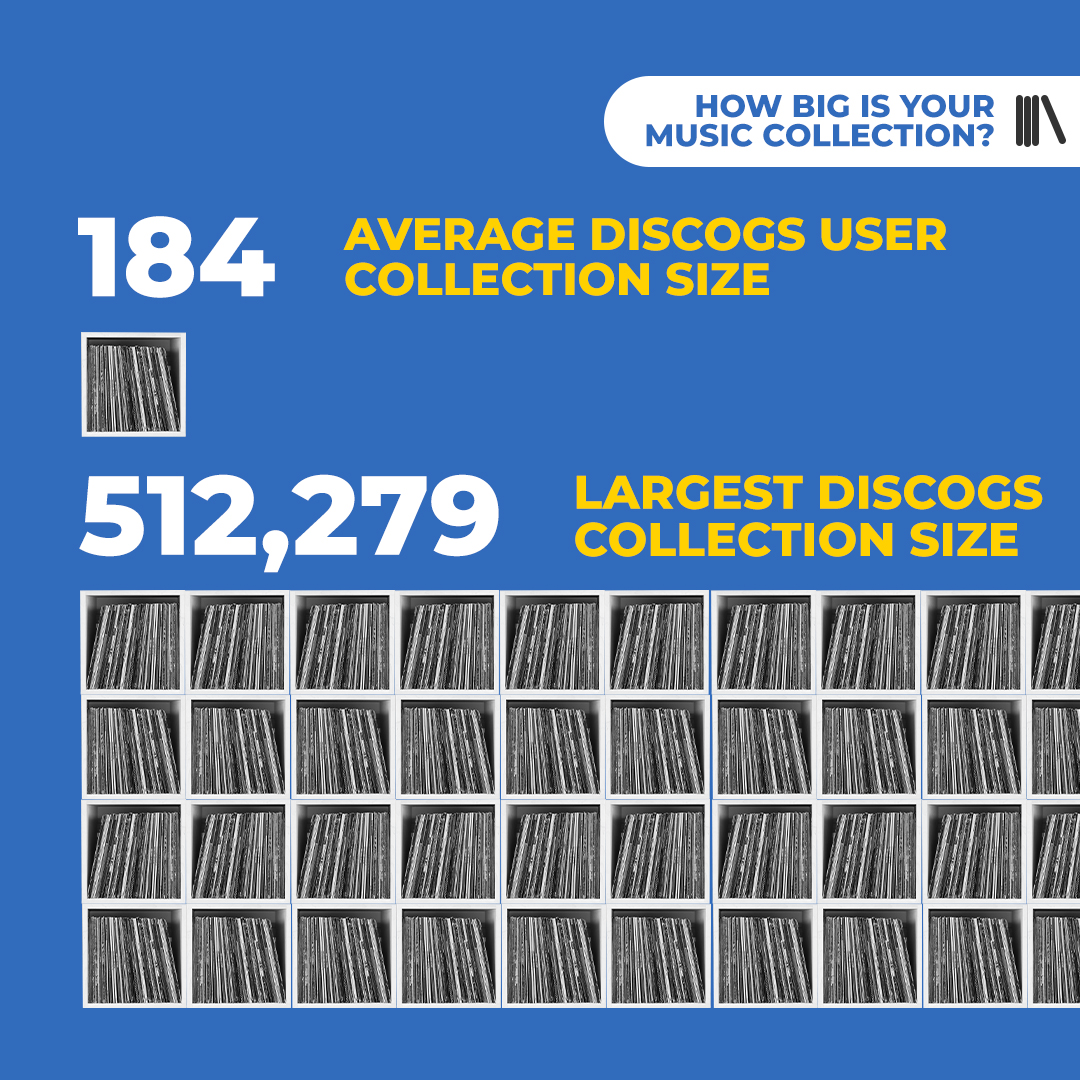 How Much Is Your Music Collection Worth?

Like many connoisseurs of rarities, some collectors maintain a library of vinyl with the understanding that their records have significant monetary value  — and may be worth considerably more in the future. One of the most compelling features of a Discogs Collection is the ability to view combined estimated value, including a minimum, median, and maximum range. In the Discogs Marketplace, each release includes a real-time estimated value based on the most recent sales. The Marketplace Sales History allows the Community — and brick-and-mortar record stores — to gauge the value of particular releases. The average Discogs collection is valued at nearly $3,160 USD. 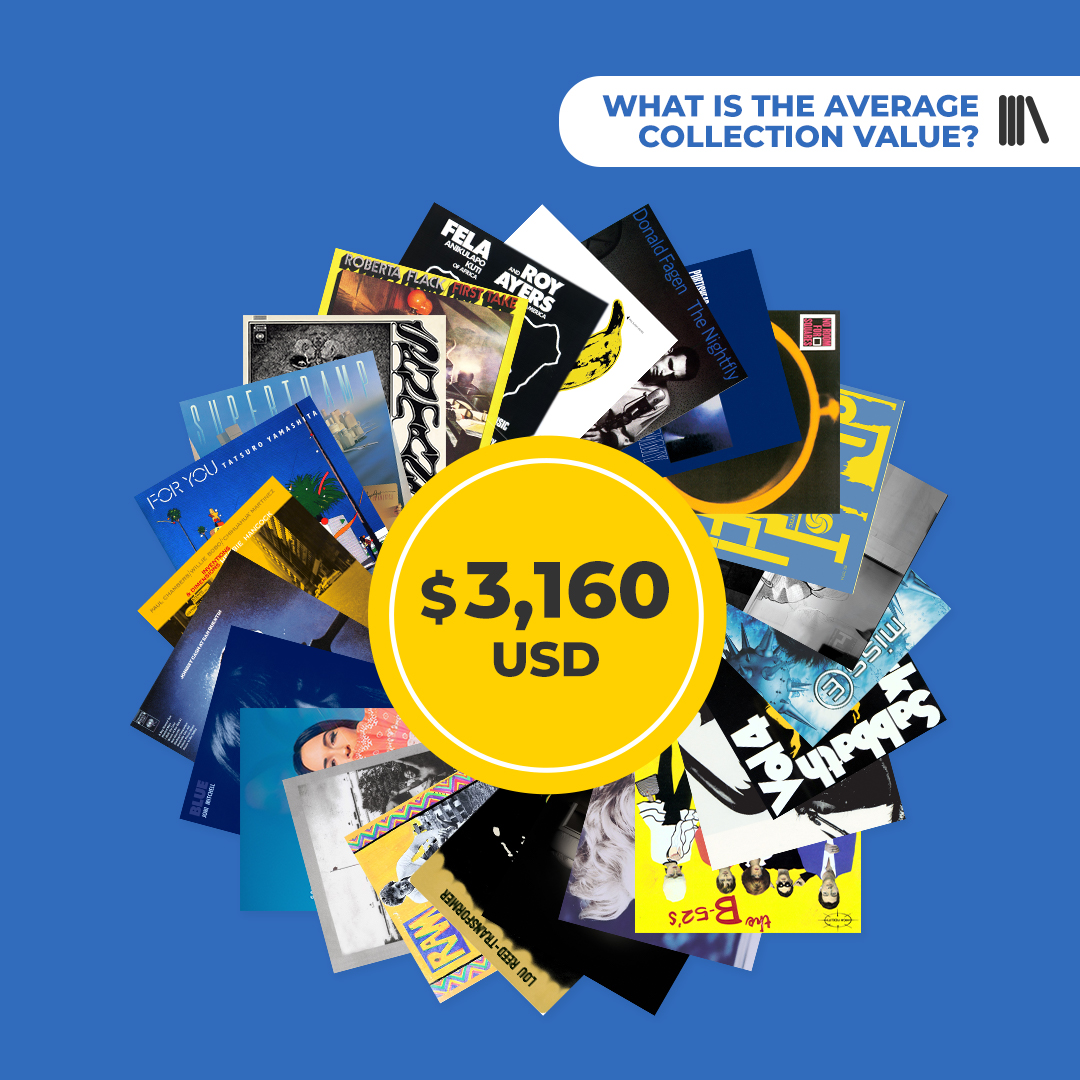 How Do You Organize Your Music Collection?

Considering the value of the average collection, it makes sense that vinyl fans want to take good care of their music. When asked how they organize their collections, alphabetical-by-artist was overwhelmingly the most common way to organize their music. According to the survey, 60% of respondents use this method, while 18% organize them by genre and 8% say they don’t organize at all. 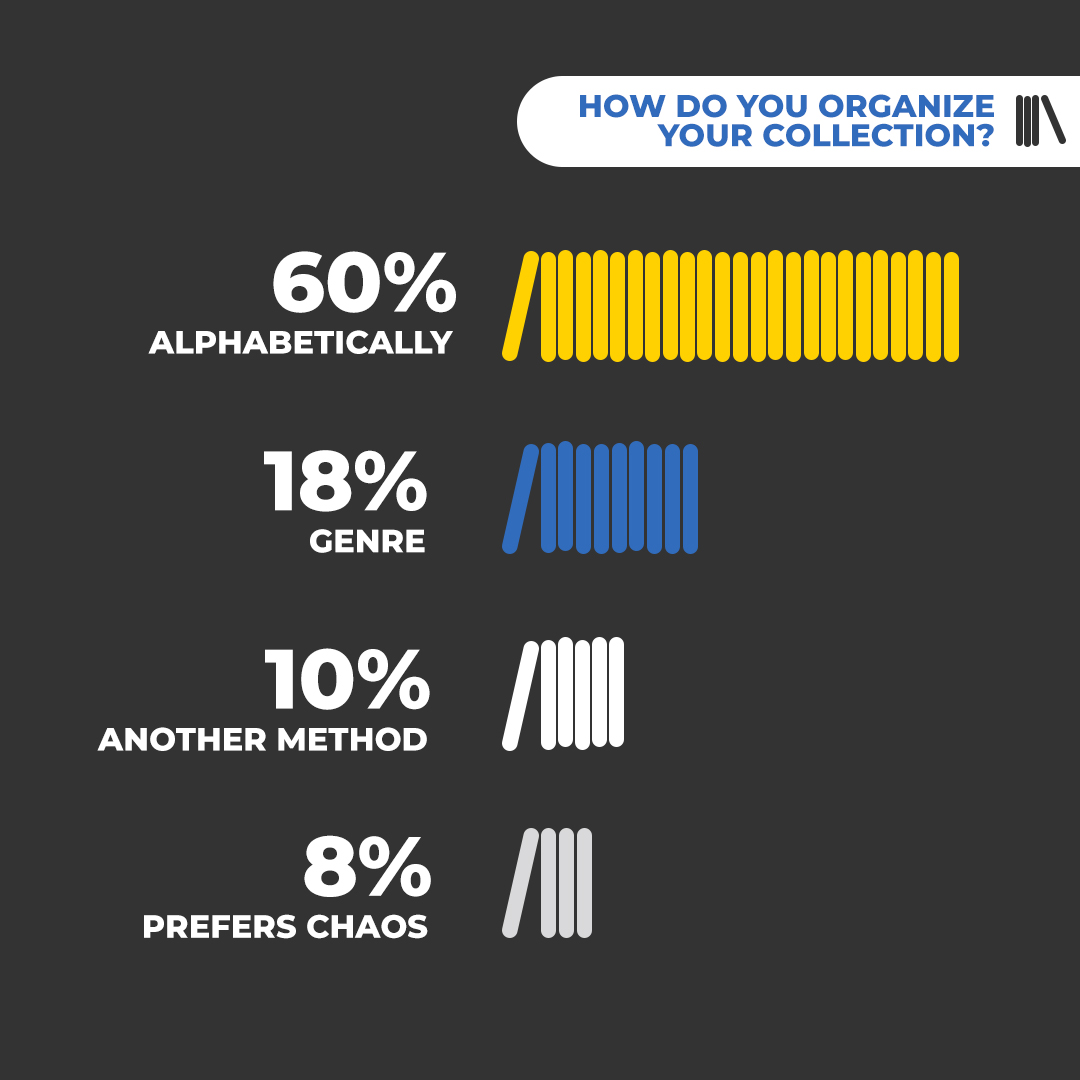 Do You Collect Variants and Limited-Edition Releases?

The Discogs Database contains more than 14 million releases maintained by a large, loyal group of contributors who regularly submit new music and continuously provide updates to existing submissions. The Database includes recordings that date back to the 1800s, album details such as tracklist and release date, information on a variety of recorded music formats, and data about limited variants coveted by die-hard music fans and hardcore collectors.

Just over 51% of Discogs collectors have more than one version or copy of an album in their possession. Audiophiles might own multiple pressings of a record purely to pursue a superior listening experience, but some collectors prospect vinyl variants based on scarcity and demand, which brings us to the much-debated topic of limited editions.

Discogs users boldly defined what makes a limited-edition vinyl record: 78% of the Community believe 1,000 copies or less is the preferred run for a limited-edition pressing. And 38% of those polled stated a run of 500 or less is truly a limited release. Music fans have spoken, and this data should be heeded by labels stamping “limited-edition” on pressings of upwards of 10,000 or even 25,000 — or no identifiable number at all.

When the Community was asked why they seek exclusives and multiple variations of their favorite recordings, the reasons were diverse and evenly split:

Color vinyl records are a hot trend for some collectors. However, within the Discogs Community, 66% prefer traditional black vinyl because they are easier to find and less expensive than color variants. The audiophiles among survey respondents strongly believe that black vinyl simply sounds better than colored vinyl.

Of the one-third of collectors who prefer color variants, their primary reasons are the cool factor over basic black and the general perception that they are more valuable. Discogs witnesses this color vinyl trend each time a popular new album is released and several variants appear on the monthly list of best-selling records. 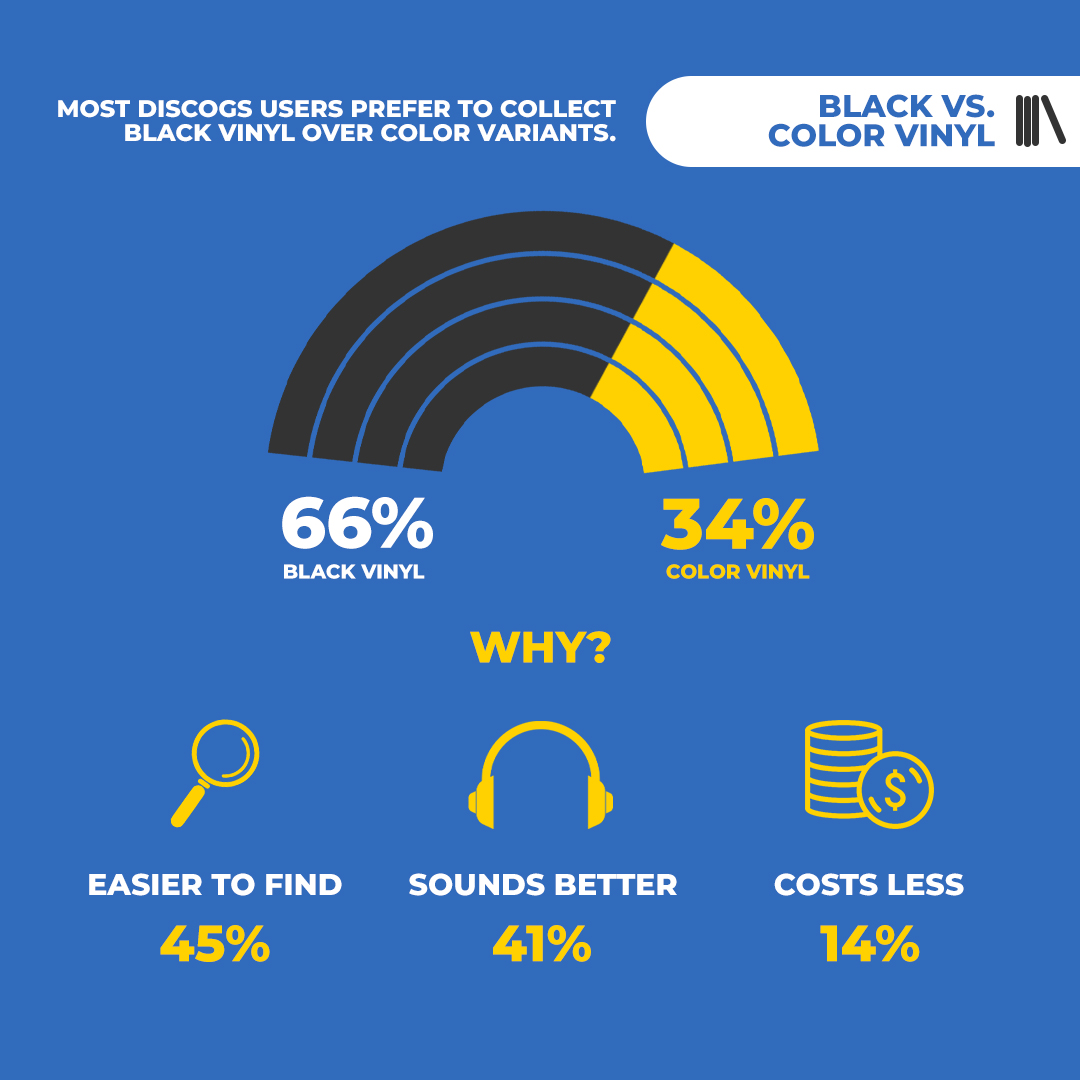 Are the Most-Collected Albums in Your Collection?

Everyone’s collection is incredibly personal and tailored to the specific listener. Each Discogs Community member builds their collection a different way, but there are similarities across most record collectors: Their unequivocal dedication to music and shared interests in artists, genres, and labels.

The Database makes it easy for music fans to explore the most collected Master Releases (which includes every version of a release) among the Community. For a deeper understanding of these records, Discogs uncovered the most collected albums released by decade between the 1950s and the beginning of the 2020s, revealing trends in popular music over the past 70 years. Interestingly, Pink Floyd’s Dark Side of the Moon — the biggest release of the 1970s — has been the most collected album on Discogs since 2010. 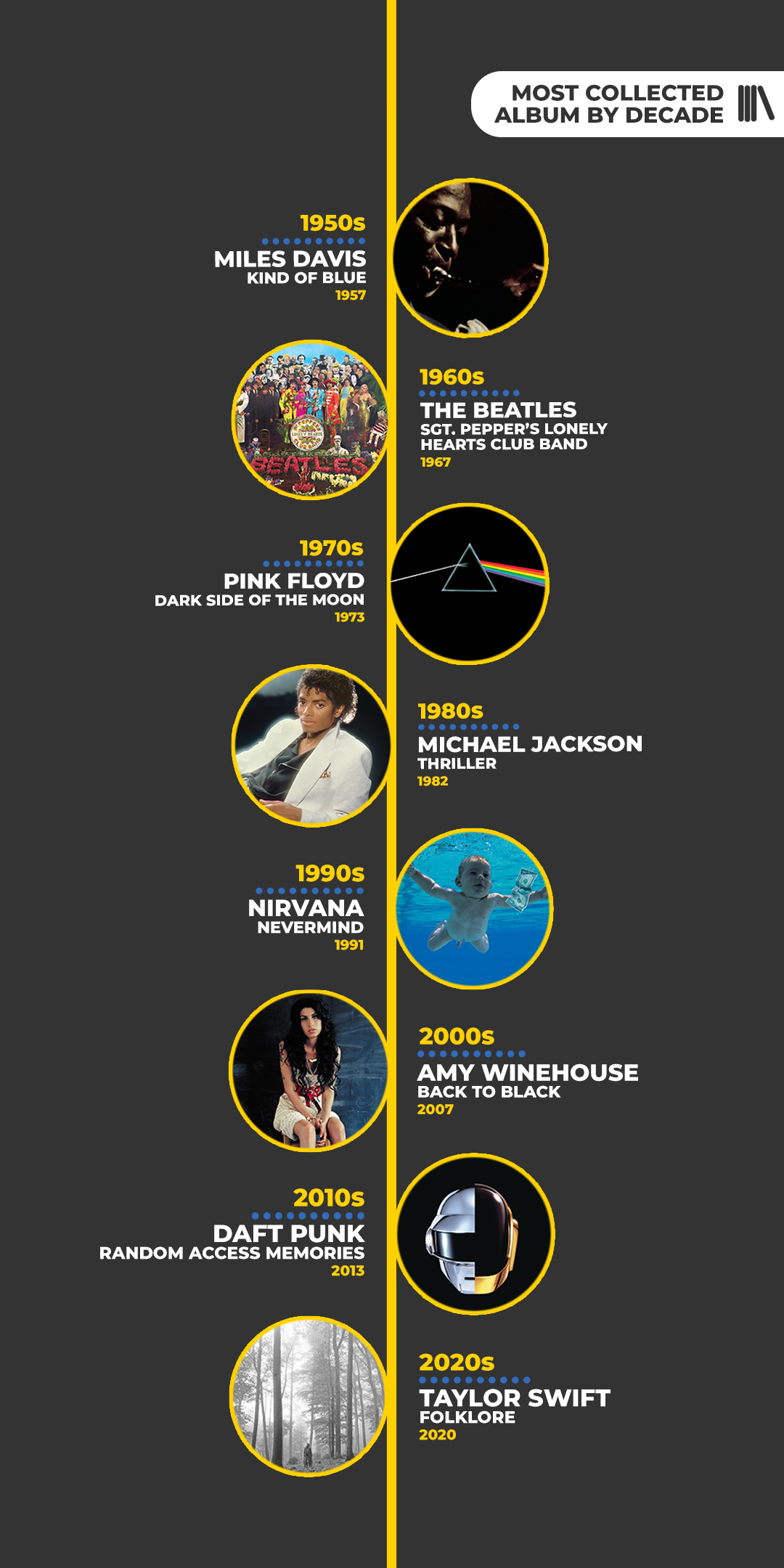 Release metrics in this report were gathered from the Discogs Database and represent totals through April 31, 2021. The 3 million collectors figure was determined by the number of users that added at least one item to their Collection. Survey responses were gathered between April 20-27, 2021, and from 10,000 Discogs Community members with account profiles across multiple English-speaking countries.

Discogs is the largest and most comprehensive music database in the world. Contributors have cataloged millions of recordings in the Discogs Database, giving collectors the ability to catalog their music Collections, build Wantlists of new music, and share ratings, reviews, and recommendations

Discogs is also a marketplace that connects buyers and sellers across the globe. Because the Discogs Marketplace is built on top of the Database, it is the easiest and most accurate way for sellers to list their inventory and buyers to find the exact version they want.