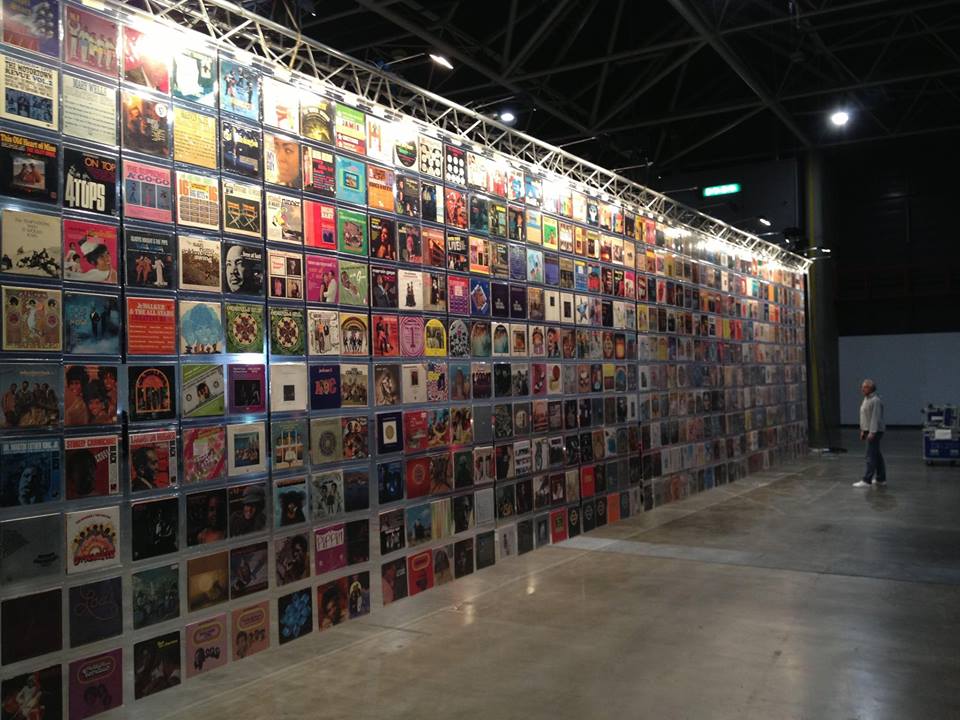 While looking into Motown collections a while back, I came across a photograph of a complete collection of Motown LPs which had been exhibited at a previous edition of the Utrecht Mega Record and CD Fair. I found out that the collection was owned by Dutch record collector, Marc Janssen. It turned out that most of the images (bar 176) in the book “Disco: An Encyclopedic Guide to the Cover Art of Disco Records“, are from Marc’s collection as well. It made me curious to speak to him and hear how he amassed such an extensive music collection.

Marc Janssen is not just a record collector; he’s also a music archivist, and an expert in soul and funk. After a while of trying to get hold of Marc, I finally manage to schedule a meeting and travel to the south of the Netherlands to meet him. On arrival, I’m warmly greeted by Marc, a housemate, and a playful pride of cuddly felines suitably named Rhyme, Rhythm, Funky & Tommy. We get better acquainted over some tea, after which Marc leads me to his bedazzling colourful vinyl vault. The room consists of shelves holding countless records, systematically arranged and registered. On most of the shelves, records facing forward form a display which could be considered an artwork in its own right. Marc explains that the records on display are the most recent label he’s completed, so the display is functional in giving him an overview of this label.

How would you describe your record collection?
“It’s a complete Soul/Funk collection. I collected mainly Soul/Funk, and a little bit of Fusion, Jazz and Disco nowadays. I try to make it as complete as possible. When an artist or a producer made several releases, I included them. So there is always something new to look for.”

How long have you been collecting?
“The first record I ever got from my parents was “Saturday Night Fever, the soundtrack“. That was a movie I attended with my niece, and I liked the music because it was positive. My parents bought it for me. I started collecting when I got some money, in the early 80s, I think in 1980.”

What was the first record you ever bought?
“I think it must have been Rick James – “Superfreak”. That record was something different.” 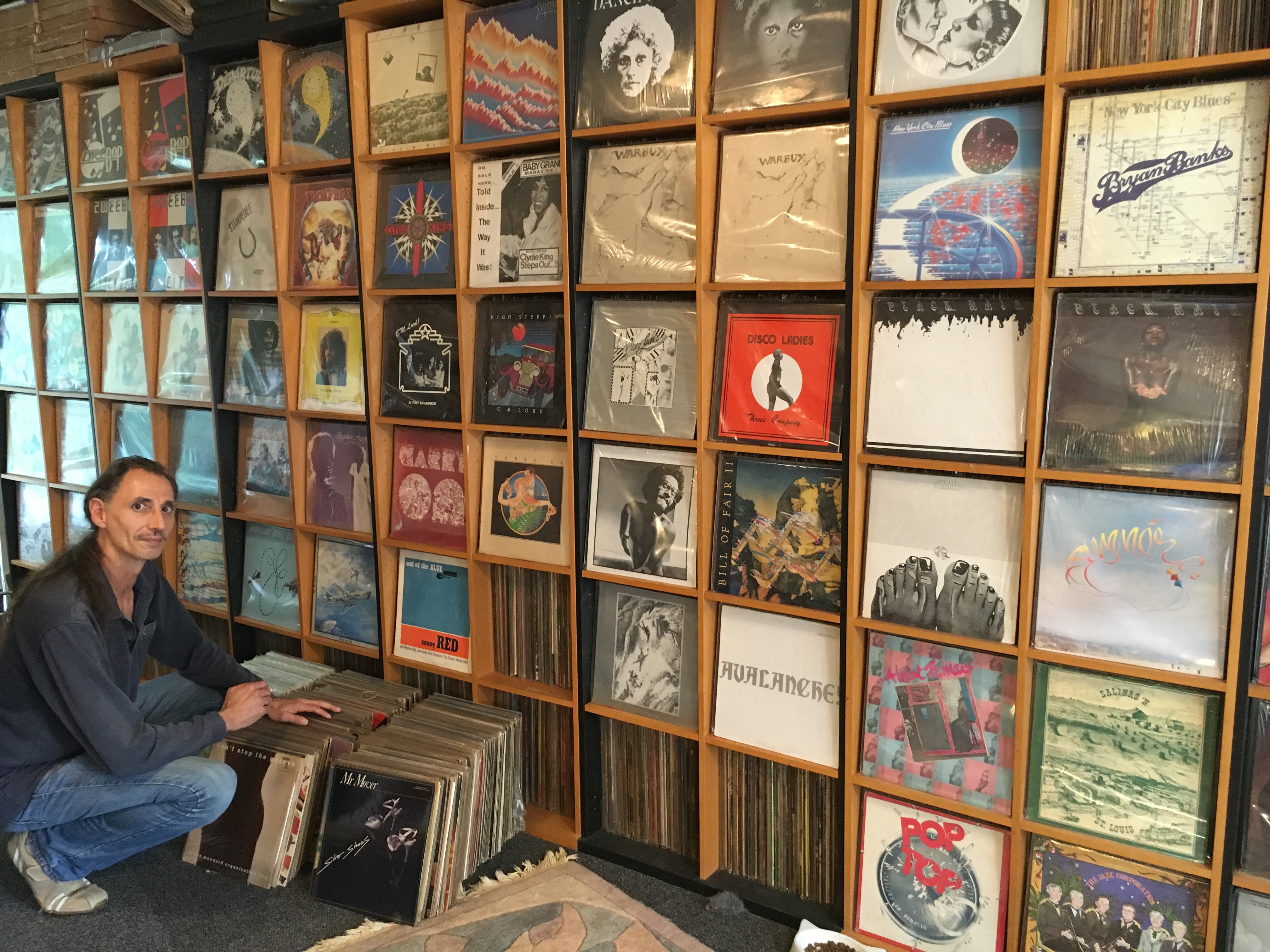 How did your collection start off?
“The fun part is, I did like music, like a lot of my friends who were into music, in bands, and played instruments. Many of them had older brothers and sisters. So when I visited my friends at their home, there was always an older brother saying “There’s another record by this group”, or “Do you know about the solo record that the guitar player made?” This information wasn’t easy to get before the internet. So I got a broader vision and I learned to listen to the music instead of idolizing an artist. There is a big difference. For example, when I heard that a group had made another album, I went to the record shop asking if they had a copy for me. Even if they advised me not to get it because it wasn’t as good I was like “I still want to hear it”. If they didn’t have it in their shop, they’d recommend another store I should go to to get it. Nowadays all that information, and often the record itself, can be found at the touch of a button.”

You have several complete collections of labels like Motown, Philadelphia, Stax, and numerous smaller and private labels. Which releases were the hardest to find?
“It got easier when it became possible to order records on the internet. You can find most of it on the internet now except for the one-of record every now and then. In the 80s and early 90s there was no Internet business. To get in contact with foreign sellers, you had Goldmine Magazine, a sort of ‘pre-Craigslist’ that had ads from mail order record shops who I contacted. That’s how I used to buy records and I constantly found rare stuff.

I used to go to the United States every third weekend of the month in the 90s, just for buying records. I left my job on Friday and I was back at my job on Monday. I placed an ad – I had a friend in the Baltimore, Philadelphia area – and I made a phone call: “Please put an ad in the newspaper, tell them that a tall Dutch guy is interested in buying Soul and Funk records”. He collected the replies and when I landed, he’d pick me up, we stepped in his van and we drove from one address to another address and we bought records from the people in their houses. On Monday I’d be back at my job in The Netherlands.

I did that monthly, it was much cheaper to get them like this. In those days, with US Air, you could check in 32 kilos, times two. Recently while visiting LA, a member of the Motown family gave me a copy of the “Thriller” album while mentioning “I remember the day Michael came by to bring me this record.” Those are the good stories. I remember having a hard time finding a record and ending up paying $100 for it in ’84 or ’85. That was a lot of money, especially at that time. It was a Gift Of Dreams LP “The Gift” and I never came across since. I use Discogs mainly for researching. The difficult thing is that the releases I am looking for are not usually on Discogs.” 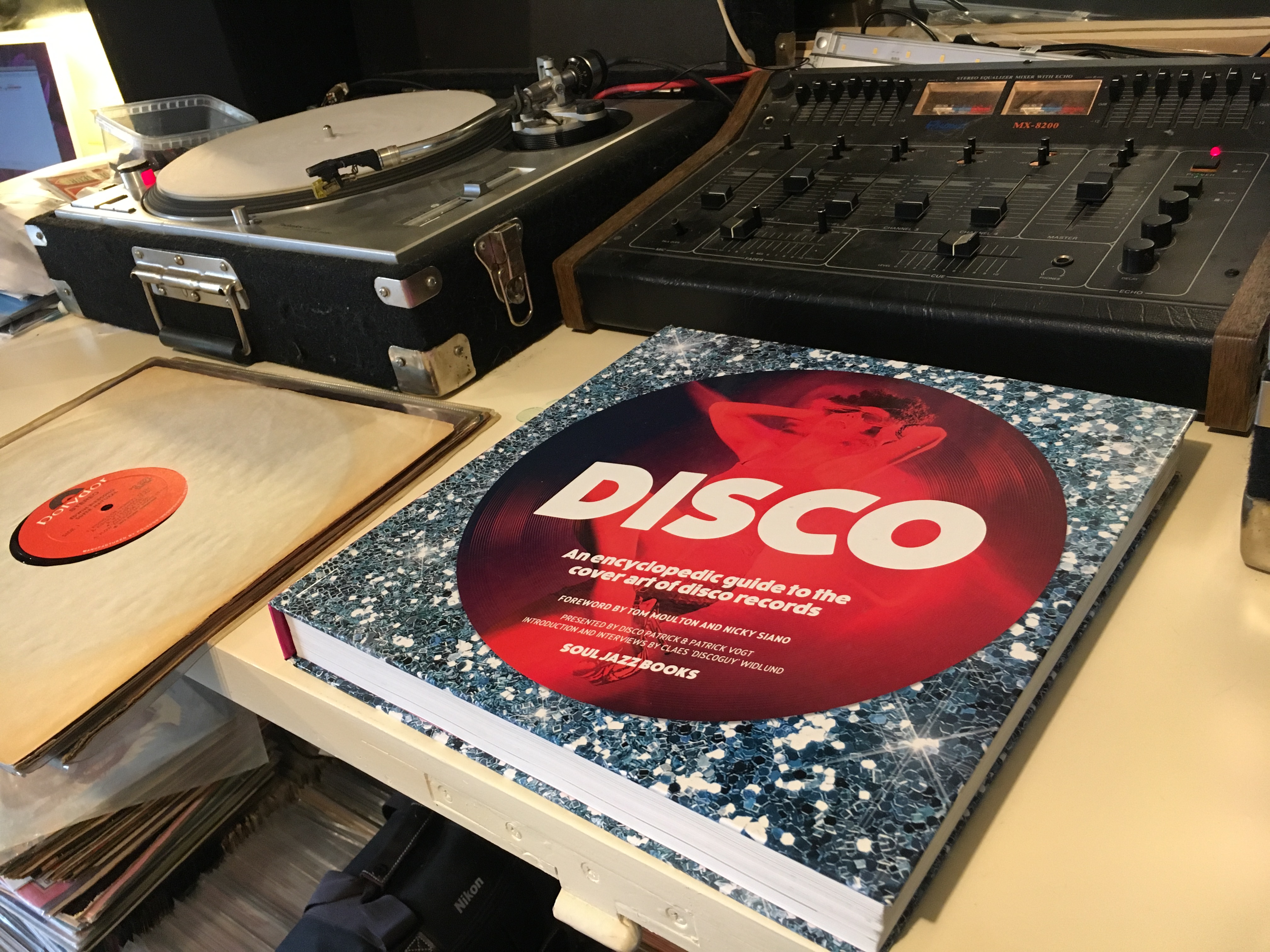 Your collecting took you all over the world.
“The fun part was when the CD was getting more popular, many collectors started selling their records. Everybody wanted to get rid of vinyl. At one stage I went to the library in Amsterdam, I introduced myself and explained I was interested in the records they kept in their cellar. As they were expanding their CD collection I could have a pick from their collection at 50 cents each. I even found some Blue Note releases in there! In Amsterdam you had Boudisque for import records, and there was a bit more Funk available in Belgium. The good thing about living in Limburg (The most southern province of The Netherlands), is that there were many American army bases around. We saw many bands perform that had never performed in The Netherlands, but did come to the army bases. And if you got an invite you could see them play. The Gap Band, Bar-Kays, for example. Most clubs in this area in the 80s played Meat Loaf, Status Quo etc. Top 40 stuff. But because of the army bases, there were a few ‘Black Music’ places, where they played Funk and Soul. That’s how I came in contact with this style of music, and that’s what I liked best!”

Can you tell us a little bit more about your collection?
“A lot of what you see here are tax scam releases on the Baby Grand label. It’s almost complete. Most of them were made by the same musicians, they made 120 records in a year’s time. Musicians like Brian Eno, David Byrne, Toto, The Eagles, they are all on these releases. Of all of these, a maximum of 100 releases were pressed and most were trashed immediately. What I like about these releases, is that the artists on them got the instruction “Don’t write hits”. When you listen to them, and some are very good, you can hear the freedom of not having any pressure. They were just having fun, made mistakes. To me, there is perfection in imperfection. It’s such a difference from the branded music nowadays, from the bubblegum pop created by talent shows. The music on these records is different from that, it’s not just a product. Why should a song last only 3 minutes and 40 seconds? Some of these last 12 minutes. And most of these people, 40 years on, are still active, and highly regarded, in the music industry.” 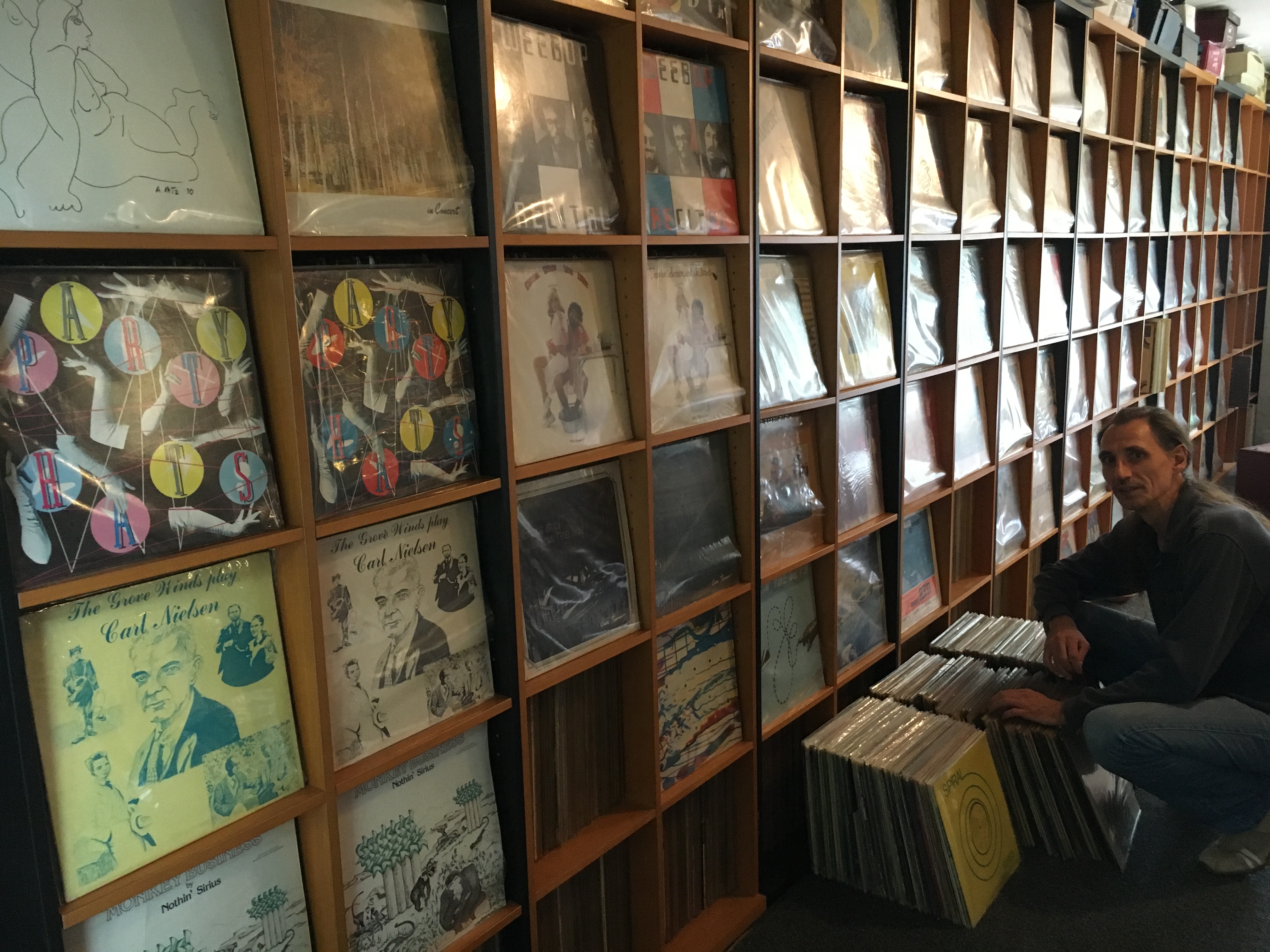 Marc explains he is interested in the stories behind the records, maybe even more than in the records themselves. He has a broad network of people involved in the music business all over the world, and travels around talking to people, asking questions and gathering stories. “I like to connect people.” He has a soft spot for the writers and musicians who do not get a lot of credit for their work. Library recordings for example, tracks which were sold, after which the original writers and composers no longer had any rights to their music. As an example he puts on a CD of a small series he has released, and lets me listen to “The Organ Grinder“.

“What I found out over the years is that there were only a few people in the music scene who were really serious about creating music, but most of them have stayed out of the spotlight. And that is why they’re so great at what they do, and have been able to continue on for such a long time. Commonly some artists have one big hit, and tirelessly perform it decades on running, the music becomes a milking cow. Understandable for getting by, but frustrating and possibly stunting to the growth of the particular artist, which leaves me wondering how they’d have shaped out musically otherwise. Other artists, like Lamont Dozier, for example, still write three songs a day. There are also people who have contributed so much to Dance music and the evolution of popular music that are relatively unknown.

Calvin Arnold who owned the Atlanta Sound Studios told me how he experienced the start of the disco craze while visiting The Soap Factory in New Jersey in the early 70s. He told me “Marc, the music didn’t stop. One record ended while another record hooked into the same beat. It was so simple, it was just a mechanical routine, you cannot sing to it, you cannot play to it, but in the studio it was pretty easy to work on it.”, Together with his studio musicians and Barney Conway, his sound engineer, he started working on long dance versions. Making 7-minute singles which they played in the same Soap Factory to find out if they sounded really full. Barney shed some light on how he made these; “at the initial recording a bit too loud and mixing it back to the normal level for the master.” It got easier when we could widen the grooves and press on 12-inch format.

I have a copy of a 1973 12 inch single over here. Calvin gave it to me. It has a paper with it explaining when and why it was made. The 12 inch mentions “A stereo version of our latest single is being released in 12-inch format at 33 1/3 speed. You don’t have to bother changing speeds or fumbling through the 45s, which as you told us, don’t receive too much play” There were a lot of tricks of the trade like those.”

At the moment Marc is music consultant & licenser for various parties. In his future projects, he would like to highlight more artists that – to his knowledge – have never been properly accredited, and also focus on great music that was shelved due to lack of marketing and distribution resources. A film maybe, a book… Rightly so. We’ll definitely will be hearing more from Marc in the future!

Marc’s complete Motown collection, as displayed at the Record Planet Fair in Utrecht in 2014.