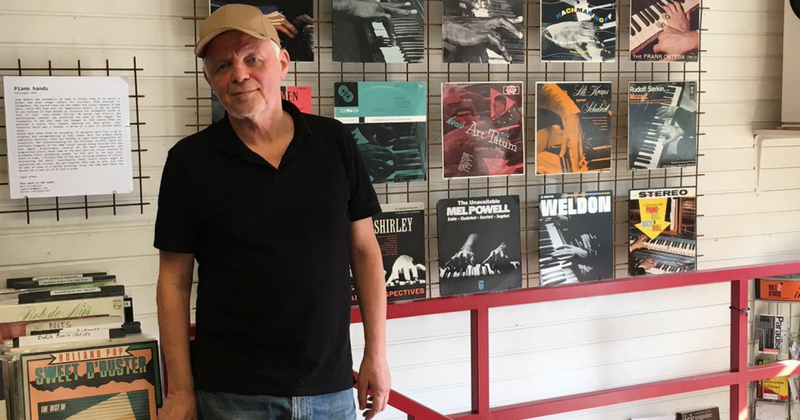 If your record shop celebrates its 30th anniversary and is based across the street from Amsterdam’s iconic music venue Paradiso, then it’s clear where to throw the anniversary party! That’s what some of Record Palace owner Jan van Dorsten’s friends thought too. They planned the event at Paradiso before telling him and worked on getting a line up together of musicians and collectors who regularly visit the shop.

Record Palace opened its doors in 1988 in a former dry cleaners. The shop at the time was managed by American Belgian Joe Schwab, who also owned The Collector in Brussels, and Dutchman Jan van Dorsten. After a few years, Joe Schwab left and Jan went ahead, running the shop by himself. He had a history in the music business: He started out as a roadie for Delft band Tee-Set, later worked as barman and DJ in the band’s discotheque Belle Amie in Scheveningen, and later again sold records at record fairs around the world.

Because of its location, many artists who perform at Paradiso pop over to visit Record Palace, with a wall of signed records as a result. Paul Weller, Lenny Kaye, Billy Corgan and Ed Motta have returned regularly, as well as Quentin Tarantino in the 90s. Henry Rollins wrote ”I have never been able to leave this place without amazing records” and only last week The Waterboys’ Mike Scott left with a stack of records.

Many Dutch musicians have found their way to the shop too. A selection of them will perform at the anniversary event, which will take place on the 7th of September, from 21:30 in the “Kleine Zaal” of Paradiso. The evening will be hosted by journalist Jan Vollaard and you can expect special performances by:

Everybody is welcome to come to join the celebrations, tickets for the evening (5€ including Paradiso membership) are available at the shop: Record Palace, Weteringschans 33A, Amsterdam.