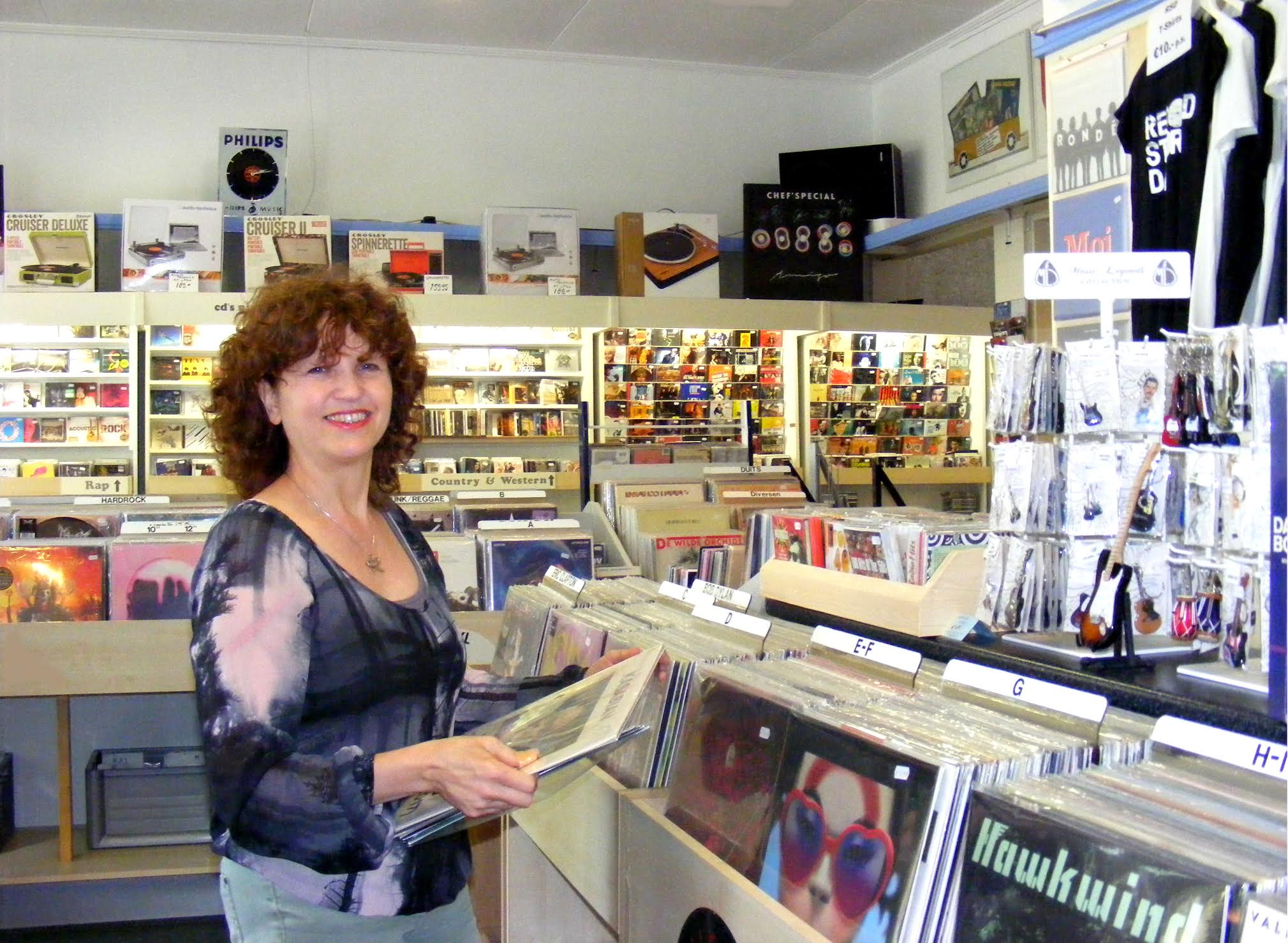 The history of Evelyn Novacek CD-Vinyl & DVD shop is rather intriguing. Evelyn’s father had fled Czechoslovakia in the 19th century, carrying his accordion and other instruments on his back. He ended up in Amsterdam, where he repaired string and brass instruments. He married a Dutch woman, and one of their six kids was named Evelyn. Like the rest of the Novacek family, Evelyn was a talented musician and played in orchestras since she was twelve. At 21 she started her own orchestra, playing the violin and the saxophone. She was the first woman in The Netherlands to play the saxophone and one of the few women to lead an orchestra at that time.

On the 22nd of May 1937, Evelyn opened a music shop in Hoogezand, in the north of The Netherlands, where musical instruments, 78RPM recordings, sheet music and gramophone needles were sold. During WWII, records were so scarce that customers had to return a record before they could purchase a new one. In the fifties, the shop moved from mostly instruments towards selling more vinyl records and in the 1970s, Evelyn’s son Joop and his wife Tinie took over the business. Since 1988, their daughter Marjolein and her husband Jan have been running the shop, which on the 22nd of May celebrated its 80th anniversary. A perfect time to ask owner Marjolein van Dam-Wolbrink some questions!

Marjolein, what’s it like to run a shop with such a history? Do you, for example, keep your grandmother or parents in mind when you make decisions?
I kind of grew up in the record shop, and was always there after school. That attraction has always remained. I ‘live’ music, and what’s better than to work with something you’re passionate about every day? We don’t make decisions with my grandmother or parents in mind, but we do run the business the same way they did: with our heart and soul. What I really like about the long history of the shop is that multiple generations have been buying music here, and still do. That stirs up memories and customers often share those with us. It makes everything much more personal, for us and our customers.

The music industry has changed a lot since the opening of the shop, and since you took over the management in the eighties. What do you think are the biggest changes?
The biggest change I see is the speed in which new artists come and go. There are so many new releases every week, and they keep on coming. The ‘life span’ of many artists is limited, unfortunately. Of course this has to do with the arrival of the internet, the world is smaller now and life is faster. Internet has brought about more changes: music from all over the world is now readily available to music lovers. But it also works the other way around: We sell to people all over the world now, through our own webshop and through Discogs. As a shop, you can’t survive without a website and webshop. These strengthen the ‘brick and mortar’ shop. Because our name ‘Evelyn Novacek’ is not the easiest name to remember, we claimed the domain name ‘cdenlp‘ which we were excited to see hadn’t been claimed yet when we picked it ten years ago. We use that same name for our Discogs account.

Have you seen a change in trends and your customer base?
We’ve noticed more customers who are visiting our shop have found us via the website, webshop and Discogs. Instead of a local role, we now fulfil a more regional role. Many record shops have had to close their business, and people travel longer distances to come to visit us. It used to be a bit quiet during school holidays, but the last few years we’ve seen those weeks getting more busy because music lovers who are holidaying in the area drop by for a visit.

What’s it like to run an independent record shop in The Netherlands? Does it offer advantages or disadvantages compared to chain stores?
Running an independent shop has its advantages and disadvantages. Of course you are the captain of your own ship. We run the shop exactly the way we want to. By being independent we can move more quickly and have shorter lines of communication to the supplier. A disadvantage could be the cost price of the records we purchase; if you buy in bulk, that price will of course be lower. Luckily, our suppliers give us a good price. I am keen on making sure our records are priced competitively. Within our possibilities of course because you need a good margin to keep the business healthy.

What kind of activities do you organise in the shop?
We regularly organise instore performances. It is an excellent way of bringing music to our customers. The instores are always well attended, and build a connection between our customers and the shop. And of course there is always a lot happening around Record Store Day. We start the day with coffee and cake for customers who are queueing up outside. All day, the shop will be filled with music fans who come for the special releases or for the instore performances. We sincerely enjoy it every year!

You sell all around the world on Discogs. What is your most memorable Discogs order?
Our most memorable order was a second hand vinyl single of De Janse Bagge Bend – “Sollicitere” This Dutch song, sang in dialect, was a hit in 1983. That in itself is not very remarkable. But it was remarkable that the order came from a Japanese customer, based in Tokyo. It’s just funny to imagine ‘Je mot sollicitere!’ blasting from speakers in Tokyo a few weeks after we shipped it :)

Do you have any advice for other Discogs sellers, and buyers?
Advice… gee. I go by the principle “Treat others as you want to be treated”. We’ve made it a principle to always treat our customers, and our stock, with respect and carefulness, and that is appreciated.

You have been adding many releases, especially Dutch ones, to the Discogs Database. Do you feel a lot of Dutch records are still missing or are most of the ones you’re looking for already there?
Almost every day I am surprised by how complete the Discogs database is. Sometimes it’s so complete that you really have to double check which version it is. Dutch releases are also well represented. We still need to add a release every now and then, but not as often anymore. 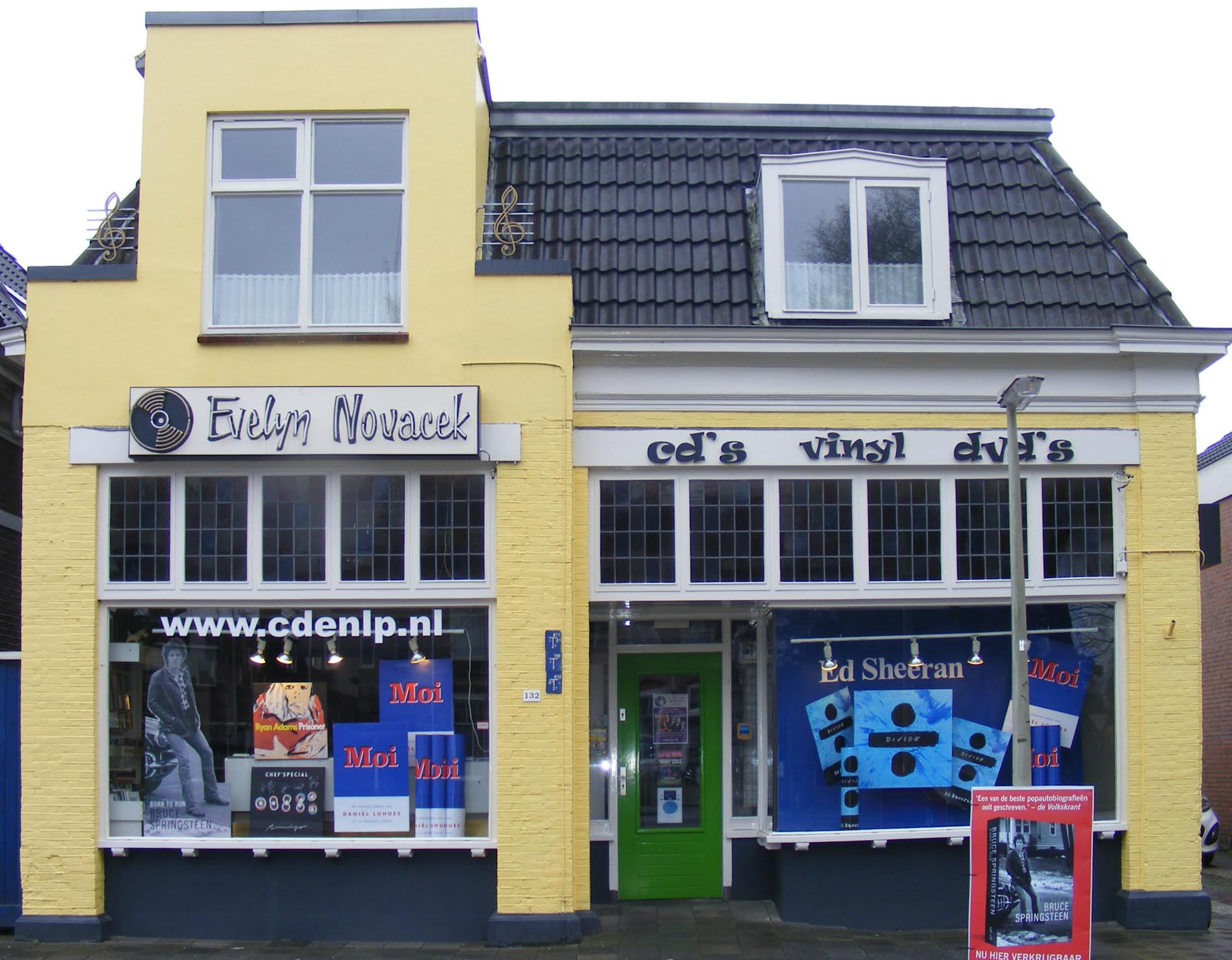 Which Dutch releases do you think deserve international attention?
Ah, there are multiple, but I will pick three. First, Robin Borneman, with his album “Folklore I – The Waving Days“. The album was released in 2015, but I only recently discovered it and I love it. It has a kind of a dark atmosphere to it, which grabs you immediately. That atmosphere reminds me a bit of “Amused To Death” by Roger Waters. Robin has a stunning, unique voice. If I had to describe it I would probably say it’s a combination of Tom Waits, Eddie Vedder and Johnny Cash. Definitely a record worth listening to, preferably when you have the time to really take in the music and atmosphere.

The second one is Ralph de Jongh‘s latest, titled “Trilogy: Dancing On A Volcano“, a box set with 3 CDs. Ralph is a talented guitarist and singer, who plays several styles of music. He’s mainly known as a Blues man. You will find some Blues on “Trilogy”, but musically it leans more towards Blues Rock, like The Stones play. At times Ralph goes all out on this album, singing and playing the guitar superbly, but his great band doesn’t hold back either, using a multitude of instruments like blues harp, saxophone, Hammond organ and violin. Listening to this CD makes me very happy, I absolutely recommend it!

My third pick would be singer Janne Schra (who used to be in the band Room Eleven). Both her self titled debut and her album “Ponzo” are real gems. She has a beautiful, warm voice and her songs grow every time you hear them. She is an underrated artist, in my opinion.

What does your personal record collection look like?
I have an enormous collection in a wide range of genres. Pop, Rock, Blues, Bluesrock, Americana, Folk, R&B: I listen a lot of music. Artists that are well represented in my collection are Beth Hart, Steve Winwood (solo and in bands), Ray Charles, Joni Mitchell, Steve Miller Band (I especially like his earlier work), The Black Crowes, Israel Nash Gripka, Boudewijn de Groot, Jackson Browne, Aretha Franklin, Pink Floyd and.. oh well, I could go on and on. I also like to be surprised by less known music. I am still discovering albums that have been released way “before my time”. There is so much wonderful music: a lot more than one can listen to in a lifetime.

What’s your favorite album you have in stock right now?
“Big Bad Luv” by John Moreland is on rotation often in the shop right now. It’s beautiful and pure Americana. His voice is a bit hoarse, which I like.

How do you see the future of vinyl, and of brick and mortar record shops?
I think vinyl will be around for a while, and the market might even grow a little too. Eventually it might decrease a little but the demand for a physical product will remain. In that light, I think that there will be an overall increased appreciation for the CD. You can already see that happen in the audiophile community.

In my opinion there still is a future for brick and mortar shops, although it will remain a niche market, like it is now. There will always be people who prefer a physical product over a computer file. I am the same way. With physical releases, you build and keep memories and history. It’s such a pleasure to go through your record shelves and rediscover things! Every record tells its own story, through its sleeve of course, but also through that small stain or crease, or that soft pop in the record…

And the future of Evelyn Novacek?
I think we’ll continue on for a lot more years. We love music and our shop, and with our webshop and selling on Discogs we’ve been able to adapt to the changing market. And if there are any other developments, we’ll do our best to adapt to those, too. Bring on the future!