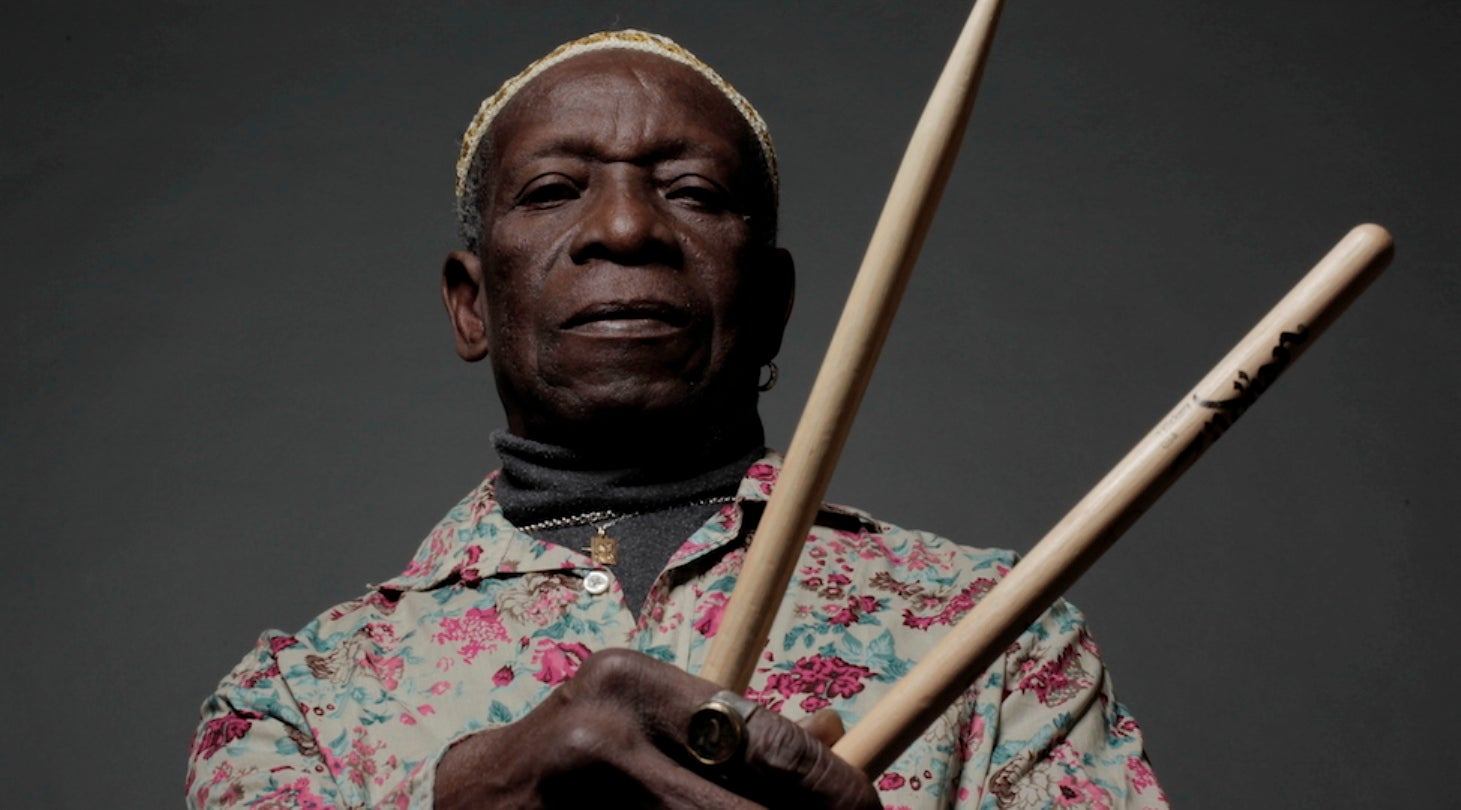 Don’t think of Afrobeat as music in a vacuum, the product of one far-flung culture, a vague synonym with “world music.” Take it from Tony Allen, who helped define the style with his electrifying drumming. “Afrobeat has many different grooves. Afrobeat is not actually one particular beat,” he explained to The Quietus in 2012. “I don’t think of the beat as being just like funk. I think it should be a mix of everything… Africa… America… wherever!”

Whether as the propulsion engine of Afrobeat pioneer Fela Kuti’s band Africa 70 or as a bandleader himself, Allen threw all wedges of Pangaea into the same stew and crafted astonishingly heady grooves as a result. Not for nothing did Brian Eno call him “perhaps the greatest drummer who ever lived” and did Flea coronate him “the greatest drummer on earth.”

Sadly, Allen died on Thursday, April 30, at the Pompidou Hospital in Paris of an aortic aneurysm, as confirmed by his manager Eric Trosset and reported by The New York Times. He was 79.

After releasing a volley of classic LPs with Africa 70, like 1972’s Roforofo Fight and 1975’s Confusion and Expensive Shit, Allen grew weary of Kuti’s disorderly financial state and reputation as a political agitator and left the group in 1978. “There were too many arrests, too many bombardments,” he told The Guardian in 2016. “You’re a musician — why do you leave yourself to be beaten up all the time like that?”

Post-Kuti, his legacy only grew deeper and danker — he collaborated with Roy Ayers, Charlotte Gainsbourg, and Damon Albarn; formed The Good, the Bad & the Queen, a supergroup with Albarn, the Clash’s Paul Simonon, and the Verve’s Simon Tong; and most recently, released 2019’s Rejoice, a collaboration with South African trumpeter, flugelhornist and cornetist Hugh Masekela.

The first song on Kuti’s first record is titled after a Yoruba word meaning “chop teeth.” “It… means somebody who eats their own teeth,” Michael Shereikis, the leader of the Afrobeat orchestra Chopteeth, told NPR in 2009. “Somebody who’s foolish enough to attempt something like starting a 14-piece afro-funk band.” Together with conga players Akwesi Korranting, Friday Jumbo, and Henri Kofi, and percussionist Tony Abayomi, Allen gives “J-Ehin-J’Ehin” a set of gnashing molars.

Many of Africa 70’s early records featured Cream’s Ginger Baker on a second kit, which owed to Kuti’s friendship with the English drummer and to a bid for crossover success in the rock realm. “When you’re somebody’s friend and he’s doing something a friend doesn’t do, then he smells,” Kuti explains at the top of “Ye Ye De Smell.” “I wrote this tune especially for Ginger.” It’s impossible to tell who’s who in the track’s bottom-heavy clatter, but it’s exhilarating to hear Allen in synchrony with another drum god.

Africa 70 grew more relentless and mechanistic with each record, and Open & Close contains three hypnotic jams, two of which blow past the 10-minute mark, that display the band at full tilt. “We’d play six hours a night, four days of the week with Fela,” Allen told Clash in 2017. “That’s what the people want. They want to be on the floor doing their thing. If you’re doing a three-minute track it’s boring.” On that album’s “Swegbe & Pako,” he’s liable to wrest you from your seat too.

When asked by The Quietus to give them his favorite Africa 70 album, Allen had a choice release or two. “Obviously my feelings are that they are all good!” he remarked. “But, you know, Roforofo Fight, Confusion.” The former album, indeed, is one of their freshest amalgams of funk, jazz, and Ghanian highlife. Try to mentally dissect the various components in the groove of “Question Jam Answer” and you’ll be left dazed and smiling.

Africa 70’s magnum opus Confusion, which consists of one mighty composition spread across two sides, allows Allen space to shine behind the kit. A spindrift of keyboard notes gives way to rolling thunder on his toms and snare, which builds to one of his most swinging, loping rhythms. This forms the launching pad for 25-minutes of call-and-response vocals, caterwauling trumpet, and the undulating interplay between all involved.

The earthier, more topical follow-up to Confusion, Expensive Shit was named for a real event in which the Nigerian government planted a joint in Kuti’s compound, he swallowed it, and while the fed lay in wait to arrest him over the contents of his stool, he switched it for another sample. That gross-out anecdote aside, the album it inspired is a raised fist at the powers that be, and “Water No Get Enemy” is an intoxicating example of the softer side of Allen’s playing.

Kuti’s continued to grind his political axe on No Accommodation For Lagos, which would be Africa 70’s final album with Allen. “I detest singing militant. It’s not my thing,” Allen explained to The Guardian in 2016. “What [Fela] was challenging, he was right. But it was too direct and that’s why he got all this shit.” On No Accommodation’s title track, Allen’s gently percolating rhythm serves to calm rather than agitate the waters.

After leaving Kuti’s band, Allen emigrated from Nigeria to London and jammed with musicians like the jùjú singer King Sunny Adé, the Cameroonian saxophonist and vibraphonist Manu Dibango, and the Congolese multi-instrumentalist Ray Lema. He reemerged in the late 1990s, first with 1998’s Ariya and then with 1999’s Black Voices, in which he dabbled in trip-hop and dub.

“Get Together” contains one of the snakiest drum lines on the program and shows that Allen’s antenna was still picking up new stations. “I don’t want to be stagnant or bored,” he told The Guardian in 2020. “It’s evolution. I can’t keep doing the same things.”

Tony Allen, “The Drum Thunder Suite” (A Tribute to Art Blakey and the Jazz Messengers EP, 2017)

“I don’t play funk or jazz,” Allen insisted to The Guardian. “I play Afrobeat.” That said, the diminutive, demanding Art Blakey was one of his heroes, and on the 2017 four-songer A Tribute to Art Blakey and the Jazz Messengers, he paid tribute to him — with a twist. Instead of following Blakey’s immortal edict to “swing them to death,” Allen shines four cuts from the Messengers’ 1958 classic Moanin’ through an Afrobeat lens. His version of “The Drum Thunder Suite,” which was Blakey’s showstopper on that record, shows that Benny Golson’s tune worked in more forms than hard bop alone.

The Source, Allen’s final album on Blue Note is a moody minor masterpiece, showing that the drum innovator fired on all cylinders to the end. Strangely enough, it hardly resembles the Blakey cover album nor the Afrobeat he made his name on, teasing a path into contemporary jazz that Allen didn’t live to embark on. “On Fire” is an inspired wrestling match between Allen and pianist Jean Phi Dary, showing that the Afrobeat elder was still hellbent on hurtling into jazz’s future.