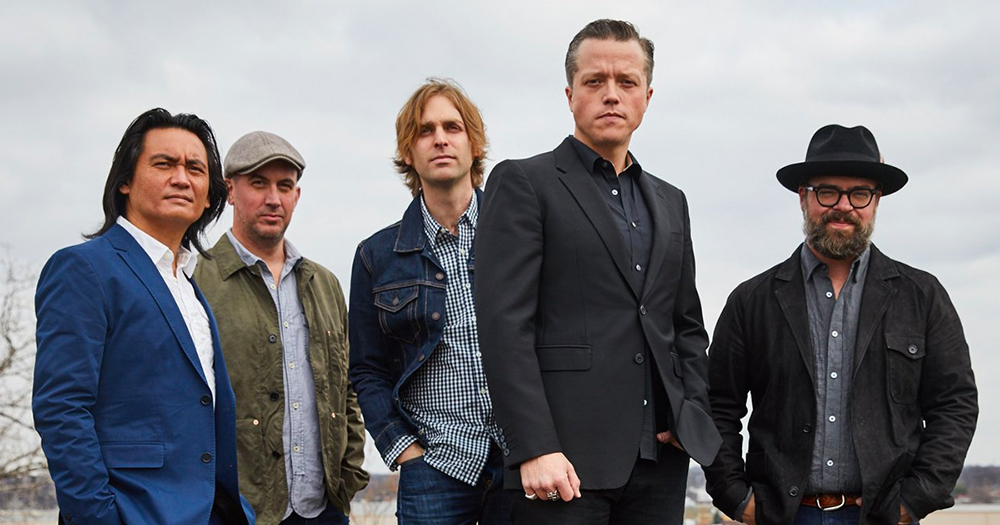 Back in the summer of 2012, I found myself in a sweaty room wedged between Jack Black and Kyle Gass on a tiny couch. (The fact that it didn’t collapse under our weight was a serious feat of engineering.) I’m generally not easy to impress, but I was unequivocally starstruck at that moment. Not because of my couchmates, though. Don’t get me wrong: Tenacious D’s cameo in the Learn To Fly video was great and all, but the room itself had me slack-jawed.

We were backstage at the Ryman Auditorium, former home of the Grand Ole Opry and the “Mother Church of Country Music.” The air was as thick with history as it was humidity. Every so often, I’d get lost in thought about who else plopped down on that old sofa over the decades. Cash? Elvis? Loretta? Willie? Waylon? Gram? Dylan? JB? Dolly? Bruce? One thing was for certain: I had to be occupying Merle Haggard’s ass groove, right? It felt like Hag’s hams.

The Ryman was more instrumental in the development of popular music than any other room in the nation. Hell, maybe the world! The Grand Ole Opry radio show, stationed for decades at the Ryman, introduced country and Appalachian music to the general public thanks to WSM’s near-nationwide clear channel signal. This aided in the creation of rock and roll, disseminating half of rock’s C&W/R&B stew. It was even responsible for Chuck Berry’s signature guitar style, thanks to the mandolin licks of Opry mainstay Bill Monroe.

However, the glory days wouldn’t last forever. When the Grand Ole Opry relocated to Opryland in the mid ’70s, the Ryman Auditorium went dark. It spent the next two decades mostly dormant, save for an occasional TV or movie shoot. Things got so bad that the building was almost torn down at one point, so the bricks could be repurposed for a hokey amusement park chapel.

By the early ’90s, tides had changed. Interest grew. The building was renovated. Iconic artists and upstarts alike were playing shows there once more. Before too long, it became a bustling venue. The Grand Ole Opry got back in the game, too, occasionally broadcasting from the Ryman’s hallowed stage. Since then, many albums have been recorded there in whole or in part. Here are six exemplary records captured at the Ryman since it returned to prominence:

Live From The Ryman

Jason Isbell And The 400 Unit

These days, you’ll find rock gods and country legends alike gracing its stage. When playing Nashville, some folks eschew the city’s larger rooms — and their attendant larger paychecks — just to play on the Ryman’s stage. Jason Isbell is a perfect example. As he ascended to the upper echelon of Americana and garnered some mainstream country heat, Isbell became the Ryman’s unofficial mayor. By the end of this month, he’ll have headlined 20 shows there in the last five years. His yearly residencies sell out almost immediately at this point (which means you can’t get tickets for any of this year’s six shows without shelling out some of that StubHub money).

So of course when he decided to do a live album, there was only one choice for a venue. During last year’s run of shows, he recorded material that would become Live From The Ryman. It’s a collection of recent tracks showcasing his band at their best in front of rabid fans. The 400 Unit runs the gamut from hell-raising, boot-stomping grandeur to subdued, nuanced emotionality. Isbell’s role as a premier lyricist is also center stage. Songs like 24 Frames and White Man’s World accrue additional weight thanks to the audience’s energy. Emmylou Harris And The Nash Ramblers

If Emmylou Harris hadn’t cut this record in 1991, the Ryman might be dust. At that point, the building was dilapidated and literally falling apart. The structure itself was in such disrepair that no one could sit on or under the auditorium’s balcony. It meant only 200 people could attend, regardless of the venue’s official capacity (which was 10 times that).

At The Ryman was recorded over three nights with a backing band of Americana heavyweights that included progressive bluegrass godfather Sam Bush. It contains what Harris called a “travelogue of American music,” with songs from Steve Earle, Bill Monroe, John Fogerty, Bruce Springsteen, and even Stephen Foster. It won acclaim beyond Nashville circles, netting a Grammy in the process and kickstarting interest in the old building. Extensive renovations were soon underway, and the rest is history. The Ultimate Collection Live At The Ryman

Earl Scruggs wasn’t the biggest star to play the Opry, but he was arguably more important to its legacy than anyone else. Initially taking the stage as a member of Bill Monroe’s Blue Grass Boys, Scruggs’ became a larger star once he and fellow Monroe bandmate Lester Flatt joined forces as the Foggy Mountain Boys. Scruggs’ distinctive “three-finger” banjo style would eventually define “roots music” for the masses, thanks to numerous film placements for Foggy Mountain Breakdown, their recording of the Beverly Hillbillies theme, and of course countless Opry appearances. Scruggs was so important to the Ryman’s history that his funeral was held there in 2012.

This 2008 live album shows that Scruggs, even as an octogenarian, hadn’t slowed down a bit. While it feels more like more like his folk-rock work from the ’70s with the Earl Scruggs Revue, the 18 songs on The Ultimate Collection do a great job of encapsulating his career and showcasing what made his banjo work legendary. Ramble At The Ryman

Late in his career, Levon Helm wanted to play a lot, but he didn’t want to travel a lot. He was a cancer survivor in his 70s, after all. He was also in financial trouble thanks to medical bills, struggling to keep his house and studio in Woodstock, N.Y. So he started playing makeshift concerts at his home with a — wait for it — “house band” stacked full of accomplished session musicians. They were essentially rent parties at first, but it turned into a regular gig that Helm dubbed the “Midnight Ramble.” After a few shows, his famous friends joined in. People lined up for miles to attend every Ramble, but there was only room for a tiny crowd each time.

Occasionally, he took the show on the road so larger crowds could partake in the unique experience. In 2011, Helm released a live recording of the Ryman’s Ramble. Just like the hometown shows, a star-studded cast was involved, with Sheryl Crow, Buddy Miller, John Hiatt, and Sam Bush popping in. As you can imagine, the album sounds like a party, because it is a party! Helm’s soulful croon and the rollicking band provide a tiny jolt of the magic that must’ve been present at the real Rambles.

Live At The Ryman

Marty Stuart And His Fabulous Superlatives

Marty Stuart is a consummate country performer. He earned his stripes early on by working with Lester Flatt, Doc Watson, and Johnny Cash before striking out on his own. He quickly adopted a rockabilly-inflected, neo-traditionalist style; like if Dwight Yoakam worshipped Roy Orbison instead of Buck Owens. Then he rose through the ranks and became a perennial Opry star.

While the bulk of Stuart’s Opry appearances were during the Ryman’s in-between period, he still held the Mother Church close to his heart. In 2003, his Fabulous Superlatives recorded a live album in the auditorium that was uncharacteristic for the period. Instead of his usual stylistic amalgamations, it was a straight-ahead bluegrass record. Upon first listen, it’s obvious how tight the band was. They have it on lockdown. This fact becomes even more astonishing once you learn that Stuart and his gang only had one 20-minute rehearsal beforehand where they mapped out the setlist. Live At The Ryman Auditorium

Jack White may have been born and bred in the LP (that’s the lower peninsula for you non-Michiganders out there), but he’s become a Nashville mainstay over the last decade. His time in Music City yielded many memorable live records, but most of them didn’t actually involve him. He was simply the facilitator, as they were recorded at his Third Man Records space just south of downtown.

White’s supergroup side project with Brendan Benson and The Greenhornes’ rhythm section, The Raconteurs, played the Ryman for what could loosely be considered their swan song in Sept. 2011. Two years later, the set was released primarily as a DVD. But of course Third Man issued the high-energy performance as a limited-edition vault package with two different vinyl colorways.