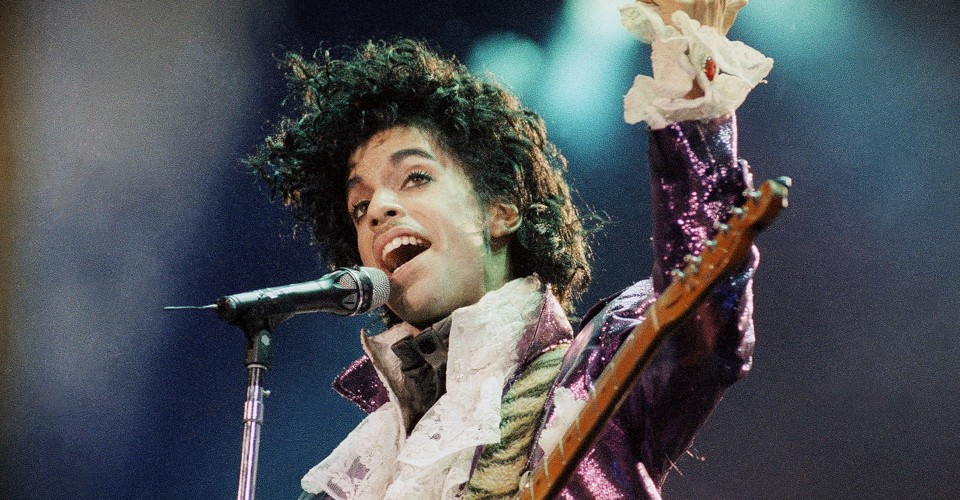 In 1981, Prince and his yet-unnamed band hit the stage of the Los Angeles Memorial Coliseum. For two nights, they’d serve as the opening act for rock icons the Rolling Stones. Prince was already a hit-maker on the R&B scene. “I Wanna Be Your Lover” from his self-titled sophomore LP nabbed No. 11 on the Billboard Hot 100 a year earlier. Mick Jagger was a big fan, and this could have been Prince’s big break in front of a white, mainstream audience.

Three songs in, as the crowd threw rotting chicken and glass bottles of whiskey at his head, Prince walked off the stage, leaving his band behind. The next day in his LA studio, Prince didn’t mention it to his engineer, Peggy McCreary (who spoke much about her work with the artist in a wonderful podcast published by Minnesota Public Radio program The Current), but the tireless work they performed in the next two years made one thing clear – Prince was forever changed by that disaster, and rather than hide from the pain, he used it as fuel to become one of the greatest musical artists of all time.

Those fateful sessions in LA and his home studio in Chanhassen, MN, gave birth to his fifth studio full-length, a double album called 1999. It was released in October 1982 as an industry-shaking record that defined not only Prince’s sound but that of the decade, bridging the gap between pop, funk, rock, jazz, punk and new wave. It was during this era that he took on his signature purple look and transformed into a fashion icon. With his newly-branded band The Revolution behind him, Prince blurred the lines between race and gender, embraced overt sexual power, topped the charts and grew into a household name.

Now, 38 years after its initial release and four years after Prince’s death, 1999 is celebrated with a 180G black vinyl, 10 LP, six-hour reissue full of album remasters, B-sides, previously-unheard studio takes and never-before-released originals. There’s even a complete concert from the album tour, recorded live at the Masonic Hall in Detroit, MI. The full Super Deluxe Edition offers an intimate glance into Prince’s creative process, cementing the album’s place as one of his best while adding vibrant dimension to one of the most prolific moments in his career. 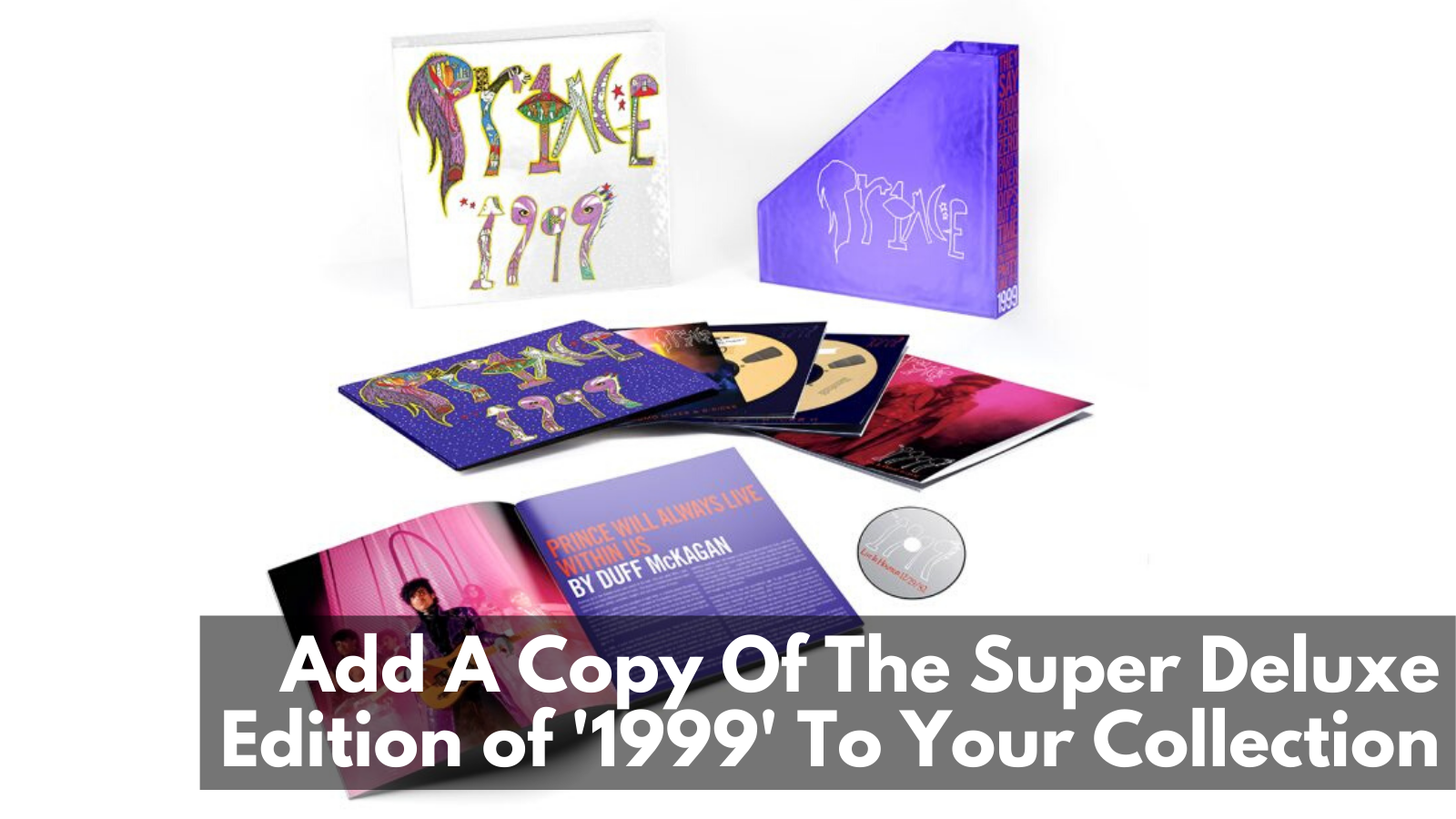 “It’s one of those records like…the Beatles White Album [and] Michael Jackson Thriller,” says Nile Rodgers to Minnesota Public Radio. “There’s the world before 1999, and then there’s the world after 1999. At least, that’s the way I see it, because he became such a superstar after that. It was almost something you couldn’t believe. It was almost meteoric, his rise.”

Prince was 24 when 1999 was released. The very name of the album was futuristic, and its sound fell in line. Besides a few vocals here and there and a guitar solo on “Little Red Corvette,” Prince composed, performed and recorded every part himself. The album leans heavily into the funk styles of his roots but is equally colored by Prince’s fascination with the Linn LM-1 drum machine and OB-8 Oberheim synth.

While Prince pushed himself toward a poppier sound, the funkiness and vibrance of each tune is eroded by a tinge of dread. 1999‘s opening song and titular track begins with a deeply-robotic disclaimer: “Don’t worry, I won’t hurt you. I only want you to have some fun.” The single lays down a funky pop hook while exploring lyrical themes of post-nuclear anxiety. “Little Red Corvette” makes an infectious love song out of a dangerously-fast lifestyle.

“Delirious” and “Automatic” blur the line between love and obsession, “Let’s Pretend We’re Married” masks pain with pleasure, and “DMSR” builds an ecstatic party only to end with pleas for someone to “call the police.” It’s this ever-present sense of danger and mania, tempered by Prince’s undeniably emotional vocal performances, that keeps the experimental, upbeat LP from being effervescently goofy or over-the-top. Even the sensual satire album closer “International Lover” curbs silliness with raw power.

The electrified sci-fi tone is prominent on the wonky atmospheres of “Automatic,” which could have been inspired by Gary Numan‘s 1979 album The Pleasure Principle, and the moody, shifting tones of “Something In The Water (Does Not Compute).” The latter juxtaposes rushing rhythms against languishing melodic chords to create a hazy, watery feel punctuated by computational textures that blink like lights on a circuit board. The stand-out production precedes the attitude of Purple Rain cut “Computer Blue,” and all of it comes to clear life in the 2019 remasters.

The original release featured 11 tracks and a myriad of sonic influences tied together with this apocalyptic, synth-driven, dance party sound. Still, 1999 only scratched the surface of the prolific work Prince was up to. He hit a creative stride, sometimes writing a song a day or more, and the full breadth of his experimentation is heard in the Super Deluxe reissue.

Equally moving are the original takes on some of the familiar tunes. Listening to the original versions of “Something In The Water” and “International Lover,” one can hear the inner-workings of Prince’s mind, comparing and contrasting the final versions with the foundation from which they sprung.

It’s not just edits, remasters and alternate versions, though. The 1999 reissue includes 12 previously unreleased songs, some of which sound more like demos than others. It opens with “Feel U Up,” one of the first tunes Prince penned during the period. It’s a wild, synth-driven pulser created to melt seamlessly into “Irresistible Bitch,” heard as intended for the first time on this edition. “Money Don’t Grow On Trees” sees Prince put his bravado aside as he chides starry-eyed dreamers over a smooth rock sound.

“Vagina” showcases his shocker streak with palm strum guitar and a post-gender message that rings righteous in today’s progressive world. “Rearrange” is an instantly lovable jam that mixes grungy noise with deeply funky grooves. It’s a strong-willed sing-along that punches at outdated mindsets, celebrating a new modern spirit echoed on its equally wild and cool follow-up “Bold Generation.” The two could play as hits today, tapping into the “this is our time” spirit of all good youth movements.

“Colleen” is the most sonically exciting, a jarring five-and-a-half-minute instrumental that takes its title from McCreary’s middle name. “Turn It Up” gets real wacky with water-drip synth textures and technicolor style. It easily fits alongside Prince’s funkiest cuts, a fully-fleshed gem of a jam. “You’re All I Want,” meanwhile, retains some of its rough demo feel while exploring an almost cutesy pop-rock style we don’t usually hear from the man.

“If It’ll Make You Happy” is surprising with reggae roots, although a bit more finished and Prince-like. “Yah, You Know” is a hilarious and somewhat baffling synth-heavy take on a certain type of Minnesota loser. “No Call U” is an upbeat ’80s pop song about letting someone fade out of your life, “Don’t Let Him Fool Ya” plays with slick funk, and “Teacher, Teacher” mirrors ’70s rock vibes against doo-wop vocals.

“Purple Music” is the absolute ideological climax, though, a nearly 11-minute epic exploring bass-heavy funk flexes, moody repetition, psychedelic wanderings, and jazzy improvisations. Prince actually played it regularly during what would become his last live tour, leading some to believe a rework and release was on the horizon.

All of this is only made more amazing by the realization that while Prince was writing and recording so many hours of material, he was also penning and producing the debut albums of protege projects Vanity 6 and Morris Day and The Time. While the former gave him an outlet for powerful feminine energies, the latter let him loose on pure black funk and R&B. These two faces combined with the mainstream appeal of 1999‘s experimental electro-pop create a full picture of Prince’s untethered voice. That he was so musically inspired as to create three bodies of work at once, along with well-made cuts that never made the light of day, truly leaves one windswept.

The packaging was the final part of the presentation, and Prince’s cinematic influences shone in his artwork, music videos, and styling. His friends and collaborators remember Prince being inspired by films of the time, especially Blade Runner, which led to the donning of the metallic purple trench coat which graces the album sleeve. It also served to inform how Prince and The Revolution would be photographed.

The cinematic quality heard in the music is amplified in the music videos. The undeniable effect of costumed band members doing funky dance moves on a smoky stage made “1999” and “Little Red Corvette” must-haves for MTV. Prince became the second black artist featured on the cable channel, behind only Michael Jackson and “Billie Jean.” That sparked a rivalry between the two artists, while further fueling a feud between Prince and Rick James. The “Super Freak” singer saw both he and Jackson’s cozying up to MTV as hurtful to the rest of the black music community, though history has thankfully seen black music come to dominate a large share of the mainstream. Thanks are indeed due to this landmark album.

Prince hit the road in support of 1999 immediately upon its release. After the Stones debacle, Prince vowed never again to open for another act. He made good on his promise, stacking the bill with his own protege acts for a night of pure Prince-made, newly-minted “Minneapolis sound.” Anyone who had the pleasure of seeing Prince live knows he shone brightest on the stage, and some of that energy was meticulously captured in the Detroit show from disc 5. Mixed by the man who worked the tour, it adds the final layer to the multi-sensory project.

It was the tour that signaled Prince’s final success in his battle to win-over America. When the tour started, the crowd was mostly black, as most R&B shows would be. By the end, the audience was overwhelmingly white, proving that Prince and The Revolution had become an outright American phenomenon, unhindered by cultural barriers of any kind.

What started with tragedy ended in unforeseeable triumph, cementing Prince’s place as the icon of his era. 1999 is what the ’80s were all about, an eye-catching tug of war between luxury and depravity, excess and inequality, power and sensuality, technology and humanity all wrapped up in rebellious and fashionable androgyny. It begat his first Top 10 hit, and in the real year 1999, it was certified quadruple platinum. Its artistic vision holds strong all these years later, and with the new load of goodies now available on the reissue, its legacy is sure to continue for decades to come.

In Partnership With Rhino Entertainment