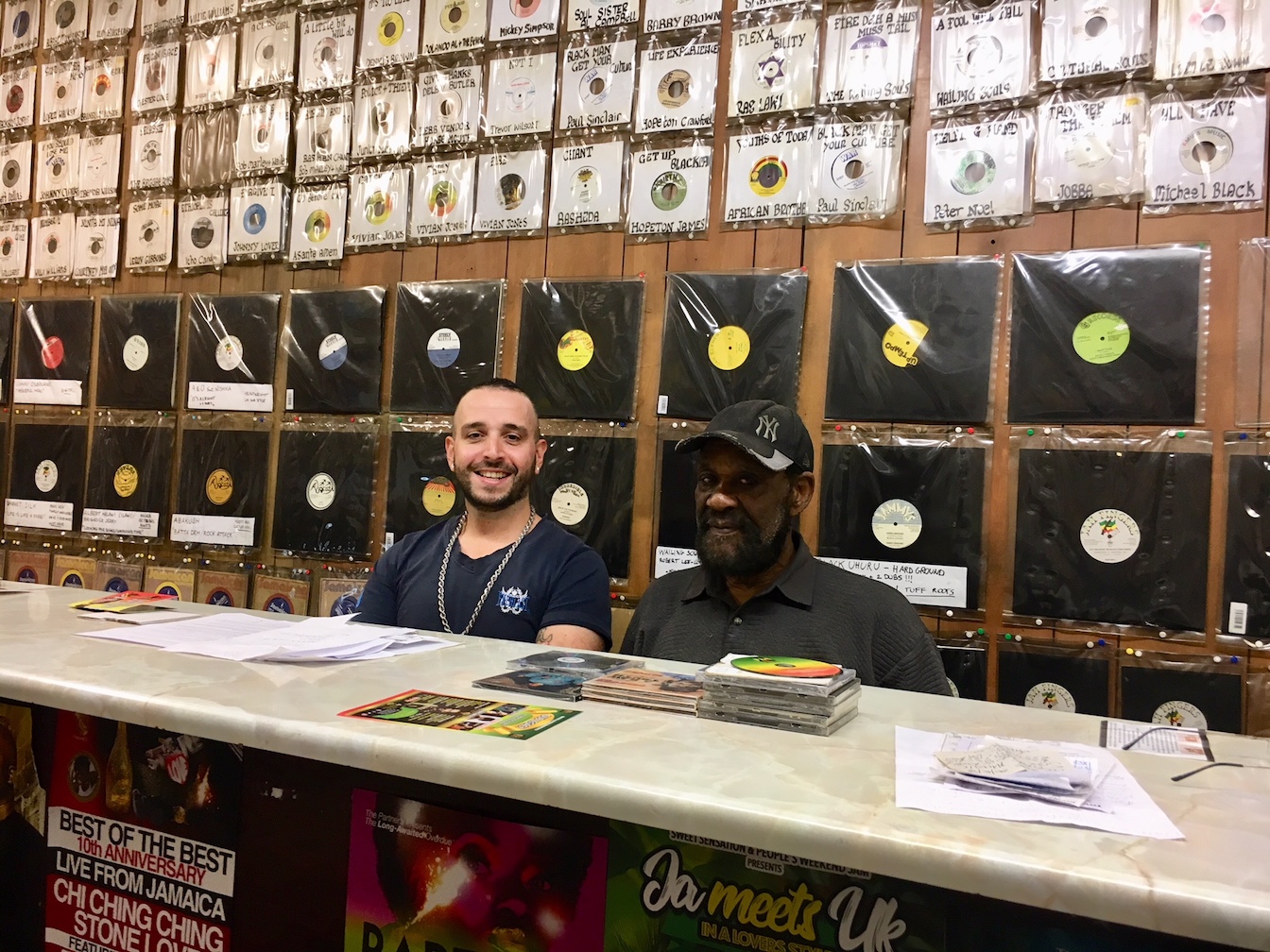 During our visit to London last month, we popped into reggae specialists Supertone Records in Brixton and were greeted by the broad smiles of Alex Caramellino and shop owner Wally B. While Wally looked after the shop, Alex showed us around, telling us all about the reissues he has been working on. He also told us Wally was not around retirement age (which we thought he was), but in his eighties.

Our jaws dropped even further when we entered the small rooms stacked with thousands and thousands of  recordings waiting to be discovered. We were so stunned by everything we saw and heard, that we didn’t realise we didn’t buy any records until we were back on the tube. And we had a lot of questions, so we reached out to Alex upon our return. Plus: Wally kept asking us if he could be on the front page of Discogs, and although this isn’t quite the front page, Wally, this one’s for you!

Can you tell us a little bit more about your background and your role within Supertone Records?
Alex: Sure. I grew up in Italy where I’ve always been somehow involved in the music, whether running a recording studio, operating my sound system, distributing records or producing my own music. I moved to London in 2009, and I was looking for a job when someone told me this record shop called Supertone Records was looking for somebody to revamp the mailorder department and build up a new website. That’s how it all started. Over the years, I ended up working for a few different shops/record labels/private sellers etc, and then I founded my own record label Jah Fingers Music, specializing in the reissuing of rare music, and a lot of releases are done in partnership with the shop owner Wally B, he taught me a lot about reggae business and is also a real father figure to me. 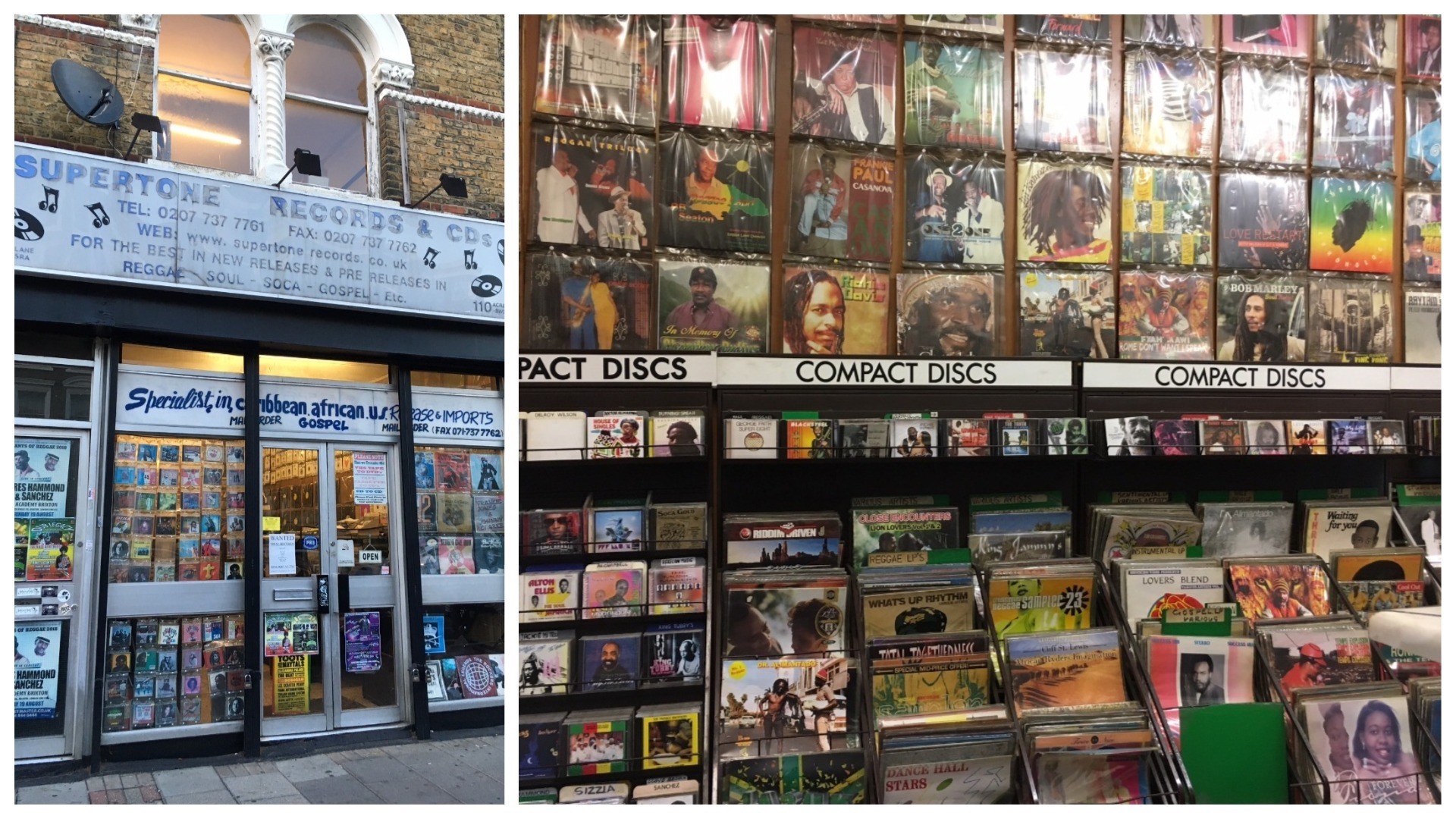 We would love to hear a bit more about the history of the shop!
Wally B: Supertone Records started out in 1969 as a reggae sound system which played reggae music all around the UK. Then, in August 1984 we decided to go into the record retail business. We are a reggae specialist, and soul, soca, calypso, rhythm and blues, r’n’b, all roots and culture and Caribbean music are also available. We are also promoter of reggae for ourselves and others. Dance hall, rub a dub, lovers rock, sentimental, the lot. Today, with this record shop, we are one of the best reggae record outlets in the business. Well known through out the world, especially in the reggae industry for stocking upon LPs, CDs, Cassettes of all the different artists, style and labels of reggae music.

What does Reggae music mean to you?
Alex: Reggae music means the world to me, it’s been my favourite music from back in the days, and my biggest inspiration. At the same time, like my brother Levi always say, there is a “red wire” that connects everything that is soulful and have the power to hit our souls. It doesn’t necessarily have to be reggae but you can find that power by listening to soul, hip hop, gospel, old traditional pop or folk songs, or even electronic music.

What are your best memories of working in the shop?
Well I’ve got so much memories I could write a book about that haha. Maybe one day I will write it for real. Supertone Records is one of the oldest reggae record shops in the UK, it also has a very important function of being a hub for the West Indian community. There are always artists passing through, big community leaders, elders, so you can always find yourself talking to big musical legends and hear conversations between great personalities, getting a deeper insight of all the ins and outs of the music scene. What is your favorite release you have in stock right now?
My favourite release at the moment is an album by a Manchester-based producer called Al Breadwinner. The album is titled Nat Birchall meets Al Breadwinner* Featuring Vin Gordon ‎– Sounds Almighty. It’s one of those albums I struggle to believe has been produced in modern days. This man is working hard on recreating the original sounds of spiritual, mystic 70’s reggae, by using original studio gears and vintage mixing techniques. It’s unbelievable how close he managed to get to that sound after 40 plus years living on the other side of the world. If you listen to it, it’s like getting thrown in an old foggy Jamaican studio from back in the days…a real musical journey! I think Al is really one of the biggest things in reggae at the moment so all reggae fans should check what he’s doing!

You have your own reissue label. How do you select which releases to reissue and what are some of the challenges you face getting them reissued?
Well I like to think of my label as a sort of soundtrack of my life, in there you will find most of the sounds that had some influence on me, all the producers I got inspired by. Sometimes people point at the fact that my label doesn’t really focus on one style only (i.e. digital reggae, early dancehall, roots, etc), instead there is something for everyone. And that is because the beauty of reggae is you can give the listener a feeling by using a million different styles and sounds, and I feel like it’s all connected. So I choose my releases based on the “best of” anything that struck my attention over the years. 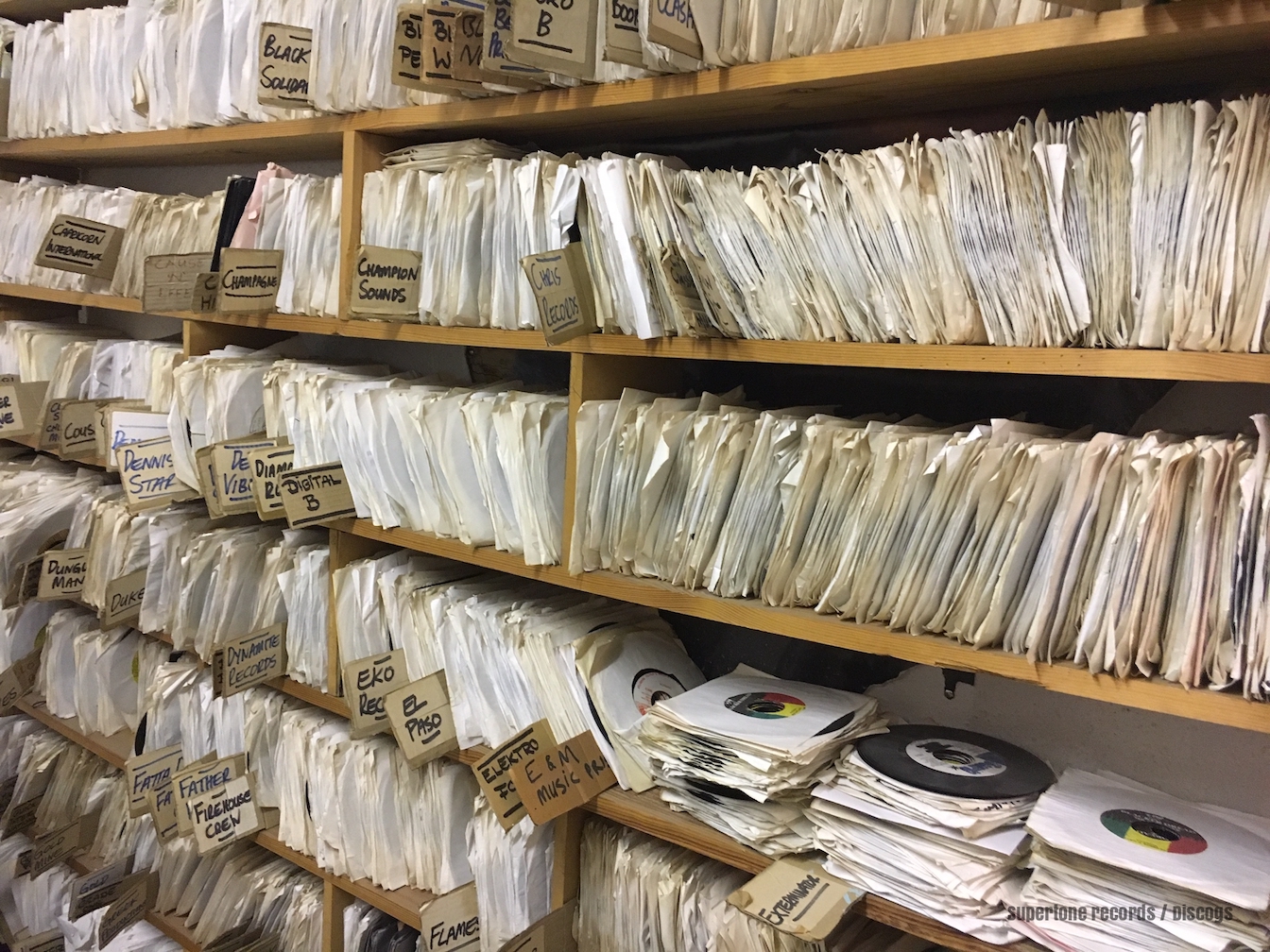 The challenges I face are all about finding the copyright owners after decades, a lot of them are dead or disappeared so I have to do a big investigation, work to track them down, or find their families. In reggae, only a small portion of artists had their stuff registered officially (publishers, copyright etc.) so the only way to license it is finding the producers or their representatives. A lot of them are retired or migrated to America and nobody has heard of them since. Also, a lot of producers couldn’t imagine that their music would have been still relevant after so many years, so they never had the foresight to archive and preserve the material, keep the tapes in good conditions, etc. What we are doing nowadays is more than just selling records, we’re sort of musical archaeologists trying to save and preserve a big piece of history and culture from the oblivion.

Which release on your label are you most proud of?
There are quite a few releases I’m particularly attached to, but most of all I’d say all the Dennis Brown ones because he is my favourite artist of all times, and also “Rasta Business” which I released recently, by a trio called the Mighty Threes. They had a few singles and couple rare albums in the 70’s, and lately they were selling for crazy money on the collectors market. I tried to find the artists for years, and when I finally found the lead singer, he fainted and dropped on his way to the meeting. I got to know he was seriously ill and malnourished, living in total poverty and marginalisation, so I set up a fundraiser for him, got somebody to go check him weekly, bring him food, take care of him and planned a set of represses with him. The response has been totally overwhelming and none of us could believe how many people were waiting for a chance to buy his music and show him their love and appreciation. I don’t even care about the musical side of it more than so, but I’m totally proud that my work could make his life better after so many years of sufferation. 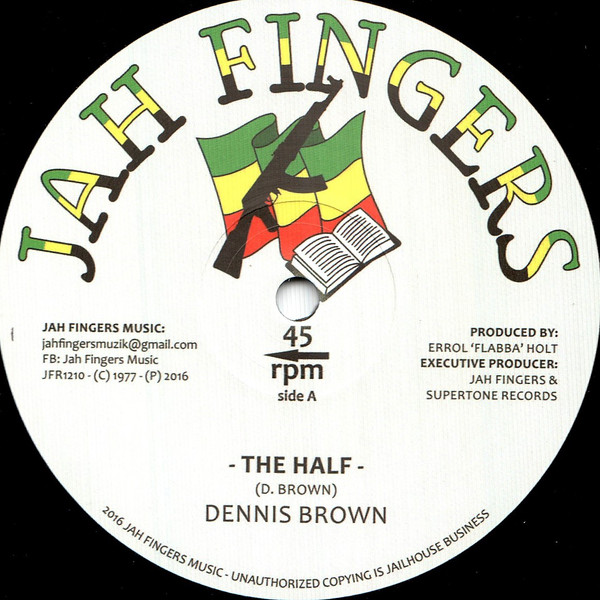 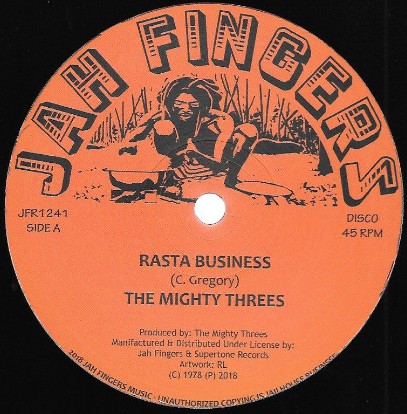 What are your plans for the future?
I plan to keep on doing what I’ve been doing for the last few years, after dealing mostly with singles I’m starting to press LPs as well. I’ve noticed that I was neglecting a good portion of customers that hardly buy any singles, so I’m trying to fill this gap in my catalogue, and also I’m about to launch a new label focused on gospel and soul music.

What is your number 1 tip for sellers on Discogs?
No rocket science here. One simple thing, don’t try to do to your customers what you wouldn’t like them to do to you as a buyer. So make sure you always give good customer service, be kind, package the records properly to protect them, don’t overcharge on shipping fees, DON’T OVERGRADE THE RECORDS haha.

And for buyers?
Contribute by adding releases, it’s a good way to secure a bargain sometimes. If a record hasn’t been on Discogs, chances are that once you create the release and somebody puts it up for sale, the price will be fair. Once somebody sells it for a big price, then people will see that and try to sell it for that or more. Also be patient and don’t follow the hype. I’ve seen people paying £300 for a record because some famous DJs were playing it at the time, and then the same record ended up selling for a fraction of the price the following year…timing is essential, good collections take years to build up, so don’t rush it!

Anything else you’d like us to know?
I’d like you to know that I’m very grateful and happy for the incredible contribution that Discogs gave to all music lovers, historians, journalists, producers and collectors. What you guys are doing is so important that I feel like we can divide history in “pre- Discogs” and “post- Discogs ” era. Keep on doing a great job! 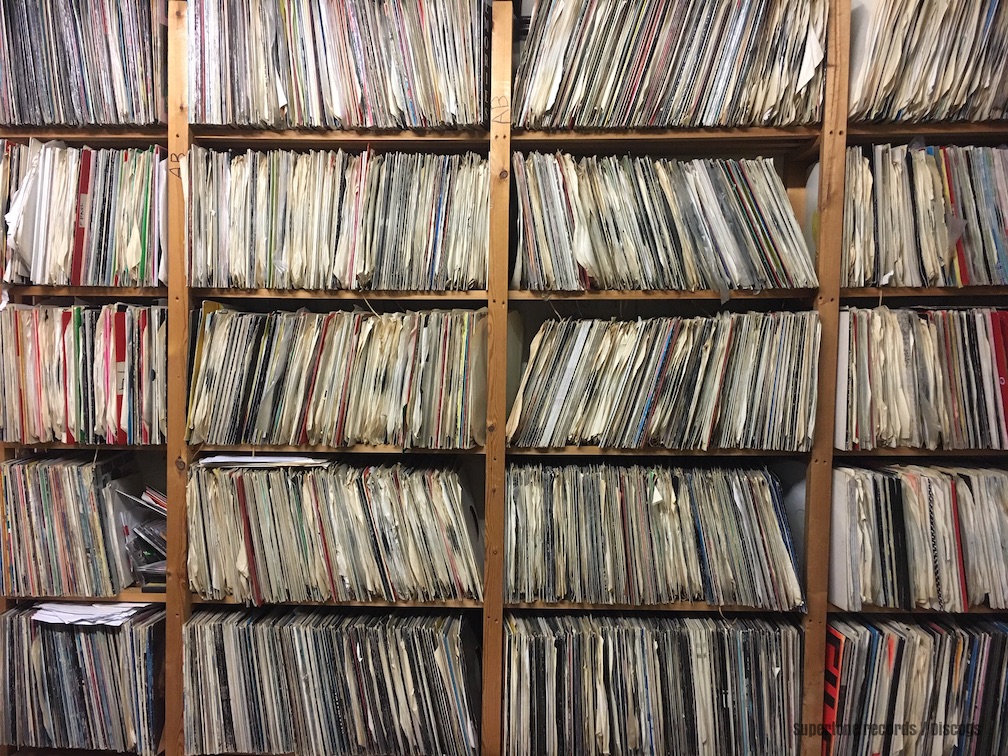