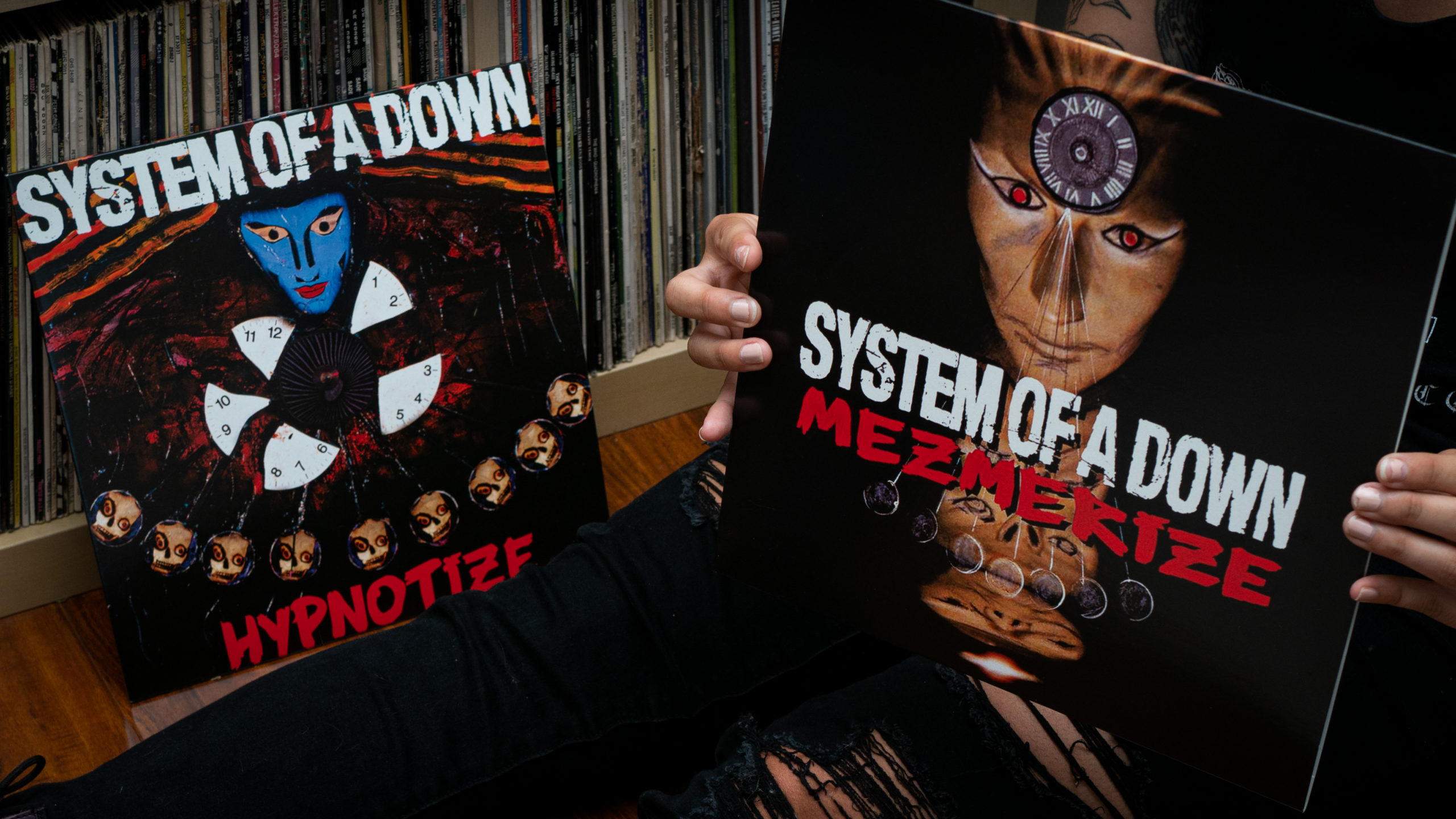 By the time that Armenian-American rockers System Of A Down released their split double album Mezmerize and Hypnotize in the spring and fall of 2005, they were riding high on a tidal wave of success.

After years of hard work and touring, their eponymous debut became a platinum hit, the follow-up Toxicity went #1 and racked up 3 million units domestically, and even the outtakes/B-sides album Steal This Album! topped a million units. They were now international stars who had scored two Grammy nominations and made the incendiary “Boom!” video with director Michael Moore which included footage from global protests against the Iraq War.

System had become a powerful metal machine that matched potent words with rambunctious riffs and wore their beliefs proudly on their sleeves. While their political ideas lean to the left, many members of rock and metal audiences skew to the right. They were taking on Establishment thinking even among their own ranks.

Despite being lumped within the over-saturated nu-metal movement that spiked in popularity between 1998 and 2003, System Of A Down boldly stood out in many ways. Their cultural heritage played into their musical influences and political activism, particularly in raising awareness for the Armenian Genocide by the Ottoman Empire in 1915 which has been repeatedly denied by the Turkish government. They had musically eclectic influences and an intensely quirky stage presence. They were direct in sociopolitical musings which skirted nihilistic nu-metal rage. Their affinity for curse words, dadaist energy, and kooky expressionism just added to the fun.

In other words, they could not be pegged in simple terms.

Each member of the L.A.-based ensemble also brought distinct parts to a melodic yet muscular musical equation.  They could be both funkalicious and thrashtastic and stop on a dime. Frontman Serj Tankian possessed powerful pipes and also rivaled the most verbally agile rappers with the vocal gymnastics he displayed on some SOAD tunes. Arguably, that was harder to pull off.

System Of A Down are unique and nothing like what became before and after them, and the twin album release of Mezmerize and Hypnotize took them to the next level. While the sonic diversity found in these albums was hinted at on Toxicity and Steal This Album!, they really came to the forefront here. Some people try to make major distinctions between these two releases, but they really are two sides of the same coin, a concept evoked by the synonymous album titles. This duology represented a sonic shift forward for the band in terms of increased use of dynamics and subtlety, but there were plenty of thrashier and more aggressive songs to provide balance.

The songwriting and singing approach of the raucous quartet changed on these albums, which were recorded between June and November 2004 and produced by Rick Rubin who had previously worked with one of guitarist Daron Malakian’s favorite bands, Slayer. Malakian became a more prominent vocalist here, often splitting singing duties with Tankian, and he also wrote more of the lyrics. The duo confronted serious social issues head on – the equal degradation of women in porn and mass media (“Violent Pornography”), political propaganda (“Hypnotize”), the importance of critical thinking (“Attack”), and the economic inequality found within military ranks (“B.Y.O.B.,” which the second B standing for “bombs”).

“Everybody’s going to the party have a real good time/Dancing in the desert blowing up the sunshine.”

On a satirical note, “Old School Hollywood” mocked an aging Tinseltown baseball game that Malakian had attended. In a more light-hearted vein, “Radio/Video” celebrated the group’s success while also reminiscing about simpler times. And sometimes SOAD’s lyrics veered into surreal territory that required more personal listener interpretations. It is easy to imagine how some fans might be befuddled by them.

System never sugarcoated any of their topics, and they made a powerful argument for why heavy metal is as good as or often superior to other genres like folk or straight-ahead rock or pop in dealing with social and political themes. Their frenetic music matched with passionate lyrics always make one feel insurgent and wanting to take on the world, rather than just lamenting problems or deciding for a more placated approach. Some people rightfully seek to rail against injustices and get in the face of oppressors to make them understand that they will not be tolerated. System have provided anthems for their awakening.

In a 2018 story for Revolver by Dan Epstein, the foursome discussed the albums’ creations and assembly strategy. Diverse guitarist Malakian had been listening to black metal and ’60s rock and pop around that time. Interestingly, he brought in more lyrics while Tankian brought in more music. Energetic bassist Shavo Odadjian admitted he was encouraged to bump up his game as he was considered to be a better guitarist, which resulted in Malakian playing most of the album’s bass parts. By the time they hit the road from 2005 into 2006, Odadjian had become more proficient at his instrument.

The group also decided to split up what would have been a fully stuffed single CD into two discs because of the decreased attention spans of modern listeners. “I remember one day sitting down and listening to 30 songs in a row in the studio with Rick,” Tankian told Epstein, “and I was done — I was exhausted. I couldn’t listen to another song, and I kept on thinking, ‘I can’t imagine someone having to go through this!’”

The artistic expansion that the Armenian rockers displayed on Mezmerize and Hypnotize paid off with big dividends, critically and commercially. Both albums went platinum and debuted at #1, allowing SOAD to join a small club of artists who have had two #1 albums released in the same year. Each disc landed Grammy Award nominations for Best Hard Rock Performance – “B.Y.O.B.” from the first, which won, and “Lonely Day” from the second.

Further music from the sessions later came forth. The “Vicinity Of Obscenity” / “Lonely Day” EP released in 2006 offered fans some extra goodies. Beyond the two album cuts were covers of Black Sabbath’s “Snowblind” and Lou Reed’s “Metro” along with the track “Shame” which was an edgy collaboration/cover with Wu-Tang Clan. A separate “Lonely Day” single also tossed in the System B-side “Marmalade”.

The group also continued with their vivid visual explorations. The video for “B.Y.O.B.” featured the band playing to a crowd gradually being infiltrated by black-clad automatons whose visors bore propagandist keywords. A statement on societal apathy, “Lonely Day” presented images of isolated band members and citizens in downtown Los Angeles disregarding various things on fire, from trees to a billboard. A background image of two businessmen shaking hands before a burning bush in a business plaza echoed the cover of Pink Floyd’s Wish You Were Here.

This was all an artistic coup for them, yet underneath this strong facade, cracks had formed within System’s ranks. In a 2018 story by Kory Grow for Rolling Stone, it was reported that a rift had been growing within the band. While the rest of the group wanted to record and tour at the steady pace they had been, Tankian wanted a break from that cycle for numerous reasons, and he sought new musical horizons. Malakian claimed he had to practically beg the singer to work on what would be their last two albums. Perhaps that tension enhanced their aural melange. Their powerhouse drummer John Dolmayan has simply stated that every member of the band is responsible for both its amazing success and subsequent failure to produce new music since then. Fair enough.

Although System of a Down reunited for concert tours between 2011 and 2015, they have not managed to release new music. Many shows (mostly in Europe) were planned for 2020, but the coronavirus pandemic curtailed them. There have been acknowledged creative and business differences that have prevented new System music from being recorded. (Ironically, Tankian and Dolmayan also got into a left versus right-wing political spat online in 2018. Malakian even kept the second Scars On Broadway album on the shelf for six years, hoping for a System album that did not emerge. He finally released Dictator in 2018.

Meanwhile, Tankian has worked on a variety of solo projects over the last 14 years, ranging from classical to jazz to a rock musical with Spring Awakening writer/lyricist Stephen Sater. His forthcoming EP Elasticity includes five songs that were meant for the aborted System project from 2018. Odadjian’s newer band Achozen reportedly has an album in the can, and Dolmayan’s engaging cover project These Grey Men have released an eight-song collection with two tracks (including David Bowie’s “Starman”) featuring Tankian on vocals.

Who knows if we will get new music from the group again, but they occasionally still tour and the five albums worth of songs that we did get make for a helluva collection. System Of A Down injected a lot of needed ingredients into the mainstream metal world of the new millennium: a fiercely focused vision, conviction of beliefs beyond patented rebellion, a melding of art and activism, and a distinctly off-beat sound and performance mode that makes you know exactly when you are hearing them. They shredded the heavy rock rule book and rewrote it.

Ever the impassioned agitators, System Of A Down planted the seeds for a like-minded metal revolution that would be great to see and hear today.

Bryan Reesman
Bryan Reesman is author of Bon Jovi: The Story and host of the podcast Side Jams
1 Comment