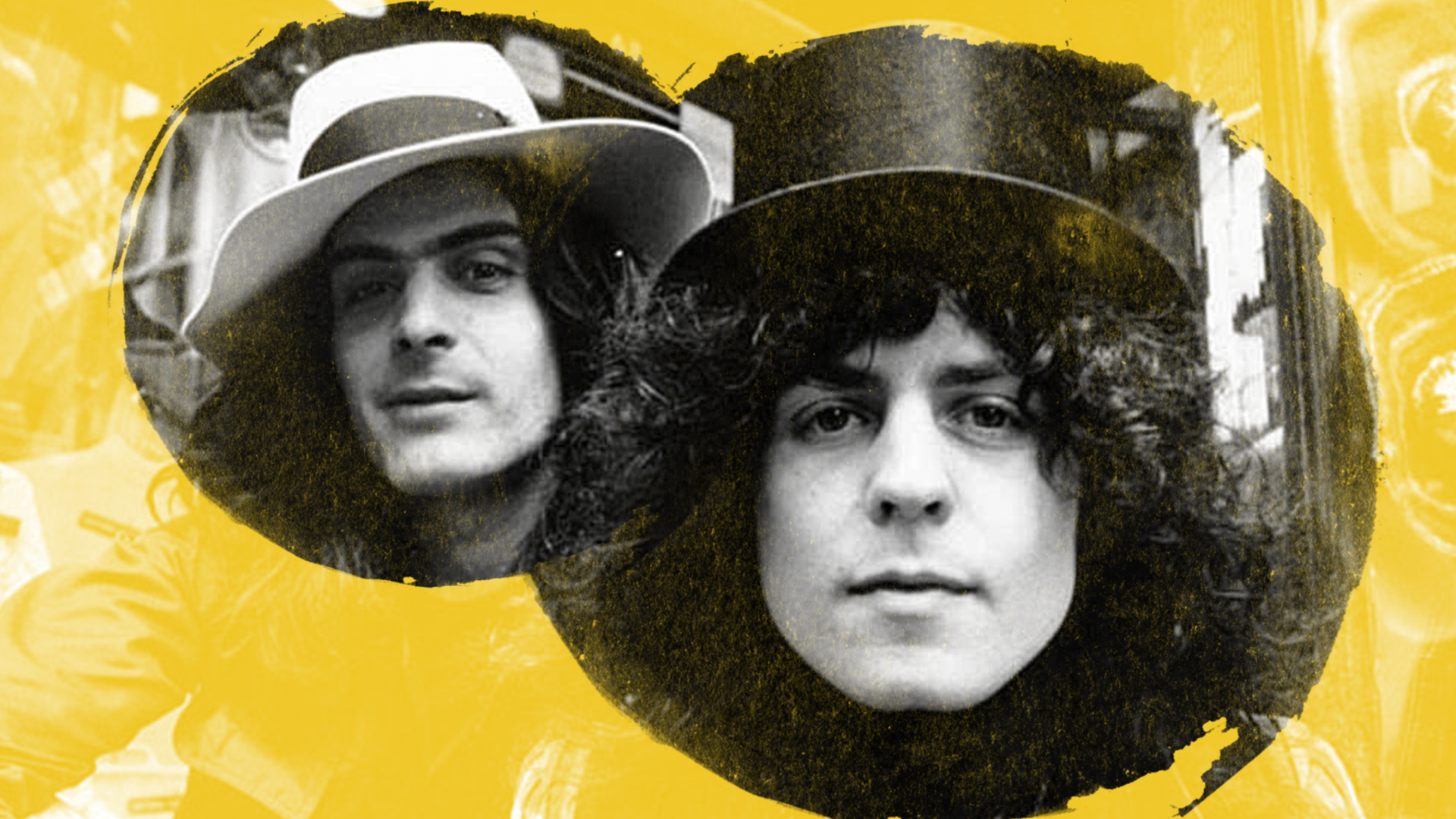 Mighty as a dinosaur with the sensual power of a panther and colorful like a cartoon, Marc Bolan was inarguably one of rock n’ roll’s greatest wonders. Glam rock’s founding father danced and dazzled his way into the hearts of teenagers from London to Los Angeles to Tokyo. Even before that, he won the world with his whimsical poetry and psychedelic lore as the hallucinogenic king of hippiedom.

A bright and bubbly wizard of words as beautiful as he was bizarre, Bolan is best remembered by his band T. Rex, or Tyrannosaurus Rex if you’re freaky. The project birthed 12 albums in 10 years, a prolific achievement outshined only by its influence. The New York Dolls, David Bowie, Siouxsie and the Banshees, Bauhaus, The Smiths, Gary Numan, Depeche Mode, The Pixies, R.E.M., and more count Bolan and T. Rex as idols.

In November 2020, the Electric Warrior will finally be inducted into the Rock & Roll Hall of Fame. His story is triumphant, tumultuous, and tragic, a wild ride was ended only by Bolan’s accidental death. Not every album is a bolt of genius, but they are each a spectacle to behold. Walking through the T. Rex catalog is a journey of mythical proportions. There are sonic surprises at every turn, and in true rock star fashion, it will get darkest just before the light.

The legend begins with Tyrannosaurus Rex’s debut. The album title was a mouthful: My People Were Fair and Had Sky in Their Hair … But Now They’re Content to Wear Stars on Their Brows. As if from out of a magical wood, Bolan and his partner Steve “Peregrin Took” Porter frolicked into the spotlight. Bolan’s voice bleated over humming drones and lively beats. His raspy falsetto was instantly iconic, singing blue-jean blues with psychedelic sleekness.

The duo was a wild groove for 1968, a sensual precursor to fellow Brits Led Zeppelin who would take its Delta druid style steps further. Inspired by a Ravi Shankar concert, My People Were Fair mixed Pagan lore with Indian influence. Hypnotic sounds are heavy on “Child Star” and “Frowning Atahuallpa (My Inca Love)” which also features BBC taste-maker John Peel reading a story Bolan wrote. 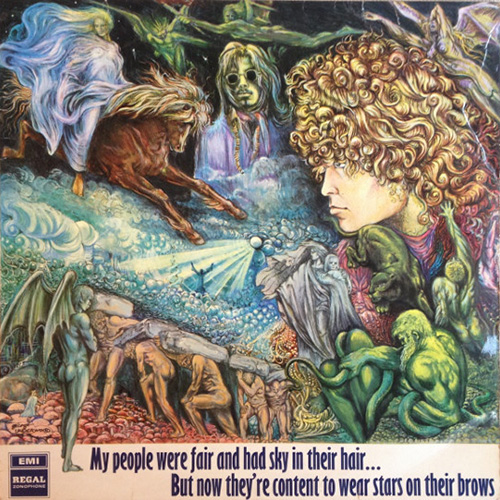 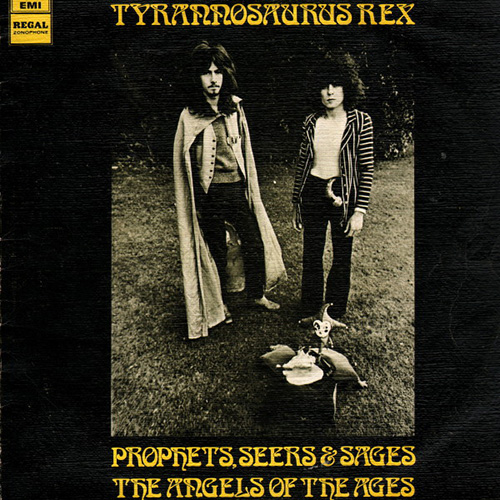 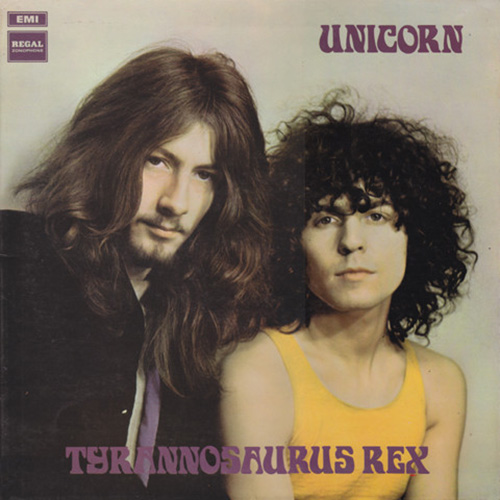 A lot of hand drums and acoustic guitar colored by Bolan’s signature strangeness, that first album is incredibly important for future freak folkers. I can’t imagine Animal Collective or Devendra Banhart without this shakeup – even less so without follow-up Prophets, Seers & Sages: The Angels of the Ages, released just three months later. It took all the childlike fun of the first and honed that spirit into a poppier pocket.

The sophomore release also upped the experimental production. Backward recordings, warbled rhythms, breakneck speeds, African drums, kazoo, Chinese gongs, and other aural inanities flipped the fantastical into something truly trippy. Both LPs were produced by legendary Bowie collaborator Tony Visconti, as were all of T. Rex’s albums until 1975.

The early period was characterized by Bolan’s childlike wonder and playful diction. Poetic lyrics were steeped in metaphor and fairy tale fancy. He would scat, doo-dat, and blast out of nowhere with all kinds of funny noises. The third album, Unicorn, expanded the sonic playground to include phonofiddles, pianos, and children’s toys. It was all visceral words and textures that plopped against your skin.

Took left after that one, but was soon replaced by Mickey Finn and an ever-increasing appetite for expansion. The fairy era ended with 1970’s A Beard of Stars, which also marked the beginning of Bolan’s electric age. Amp-aided guitar came in hot on the “Prelude” and continued strong on mystical “A Day Laye.” There was less Asian influence and more of a yearning for modernity. A growl was born on “First Heart Might Dawn Dart,” and “By The Light of a Magical Moon,” Bolan danced with princesses to neon beats. After that 35-minute saga, a rock star was born.

To be fair, 1970’s T. Rex record is as close to A Beard Of Stars as it is Electric Warrior. It’s the link between worlds, fitting both phases while acting as a bridge. A transformative effort, nominally and experimentally, it’s the first LP released under the shortened named. Visconti was reportedly tired of spelling the whole thing out. Purposeful or not, Bolan likewise became more direct in his lyrics and composition. T. Rex is mostly minimal and sexually-charged. “Childe” is just hand claps and guitar strums under Bolan’s whispery wails. “Suneye” is an acoustic guitar vocal ballad,” while “Is It Love?” is a handful of sentences repeated, getting right to the source of rock’s appeal.

The album peaks on “The Wizard,” a nearly 9-minute experiment that fits acoustic and electric guitars with scats and screeches. Bolan is caught up in the hypnotic and energizing rhythm, echoing various stylings in a cavern, embracing full wildness. Fans loved it. Subsequent single “Hot Love” shot up the charts and brought T. Rex to Top of the Pops. Bolan wore a silvery shirt and put glitter below his eyes. This is the moment many critics point to as the birth of glam rock. 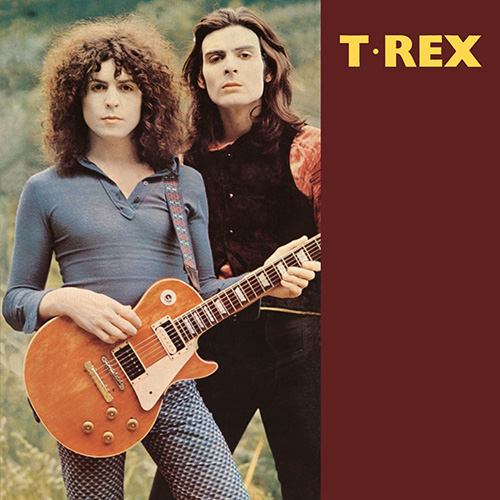 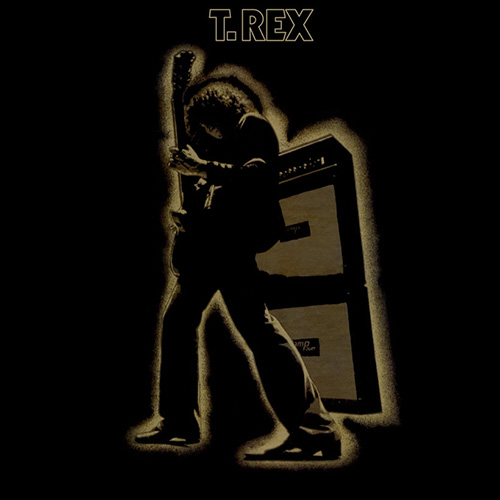 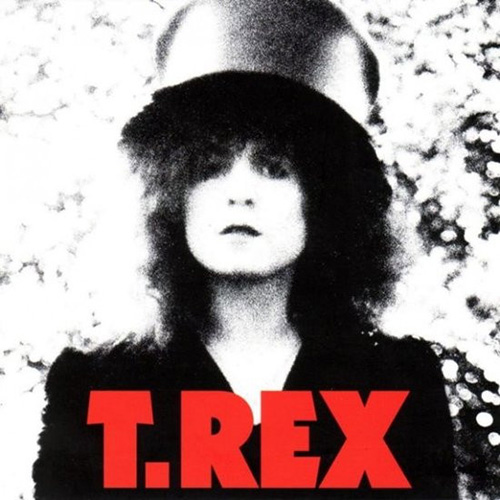 That baby came dancing out the womb on 1971’s Electric Warrior. The seminal work is a master class in showmanship and rock attitude that explodes with bops and boogies. It has come to define the group for most fans, a must-listen for any student of modern music. From the sensual snarl of “Mambo Sun” to the proto-punk table throwing of “Rip Off,” Bolan and Finn strut and swing their way through sex-charged jams, soulful ballads, and bawdy blues burners. “Bang A Gong (Get It On)” remains a ubiquitous classic.

Electric Warrior gave a voice to a new generation of rockers, while Bolan’s waifish style opened rock’s door to gorgeous androgyny. It’s enlarged sound was aided by backing vocalists Howard Kaylan and Mark Volman and brought to life on stage with Steve Currie and Bill Legend.

The sound continued to widen on the seventh album, The Slider, from 1972. Opening track “Metal Guru” comes on like a wall of sound, gritting with guitar, stomping with guitar, and exalting itself toward the sock-hop heavens with a brilliant chorus. Johnny Marr credits that song with inspiring his guitar style, and it’s easy to hear. As important as its predecessor, The Slider is a track-by-track winner with slinky sounds that would inspire Guns N’Roses, Bauhaus, and Gary Numan alike.

Bolan’s stardom and ego ballooned in tandem. Zinc Alloy and the Hidden Riders of Tomorrow is grand and explosive, an album that launches straight for the jugular with jarring textures and chaotic compositions. It’s hectic, but it’s not terrible by any means. Bolan’s lyrics aren’t the tightest, but they’re interesting peeks into the rockstar lifestyle. We hear him struggle with excess on “Explosive Mouth” and lose himself on “Galaxy” and “Change.” “Teenage Dream” asks quite plainly what happened to the innocence that gave early Tyrannosaurs Rex albums their life.

The album wasn’t well received and never saw a U.S. release. It was also the last T. Rex effort to be produced with Visconti. Follow-up Bolan’s Zip Gun was self-produced and panned as a Bowie copy-cat, but the important kernel in the whole era is Bolan’s obsession with classic soul. His over-the-top verve never ceases, but it starts to center itself around Motown harmonies and shoo-bop cool. Again, hindsight gives Zip Gun a fairer feel. It’s a bit bloated sure, but it’s funky, especially on “Solid Baby” and “Till Dawn.” He can still whip a wild guitar solo while mastering the mic. 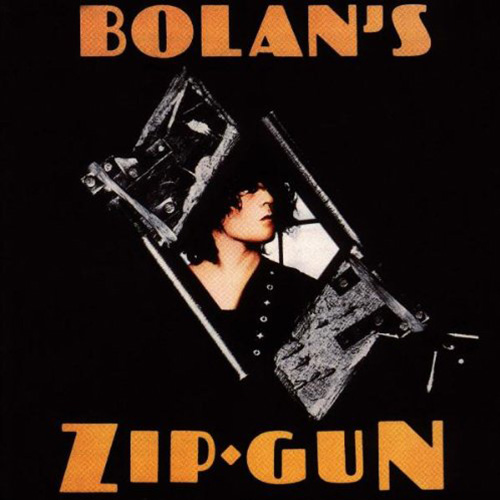 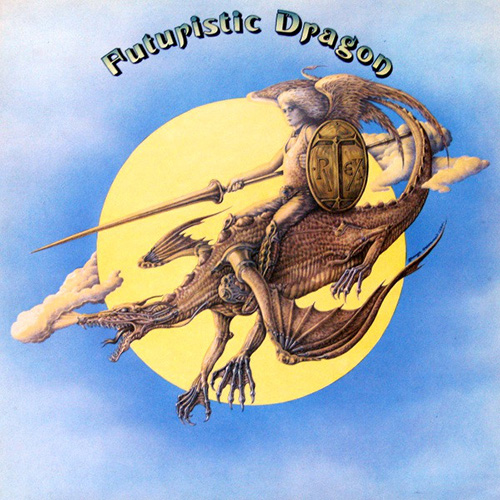 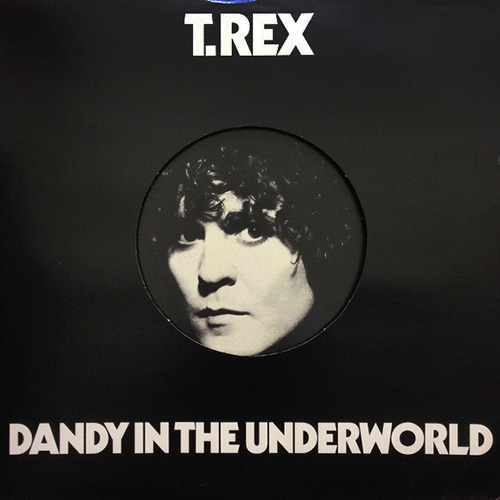 Futuristic Dragon is one of the more perplexing LPs. Released in 1976, it shimmers with disco influence though it tempers that temptation with soul rock guitar. The sound is shinier and more plastic than previous recordings, but Bolan returns to his fairy-tale roots. There’s even some sitar on this one to bring the story right back. “All Alone” is a standout while swingin’ single “New York City” was a UK hit.

Somewhere in there, Bolan fathered a child with his girlfriend and backup singer Gloria Jones (whom originally sang would-be ’80s hit “Tainted Love” in 1964). The responsibility has sometimes been cited with his getting things together, and in 1977, his 12th album, Dandy in the Underworld, felt like a return to force. All his myriad influences converge on a cool, quirky collection that plays with space-age synths and soulful blues. It’s got Motown cool and glam rock bangers, shoo-bee-do scats. and even some country western pop. It’s pluck, upbeat, and fun. Bolan sounds like he’s happy to be there.

Unfortunately, the musical madman was killed in a car accident six months after Dandy‘s release. A shrine now stands in London to mark the spot, a statue of Bolan with the epitaph “them mourning you / when you are here / within the flowers and trees.”

Bolan and his band were bold and frisky, a lightning streak of lavish and unbridled imagination from start to finish. His legacy burns brighter after his death, growing stronger with every chord and lyric his spirit influences.