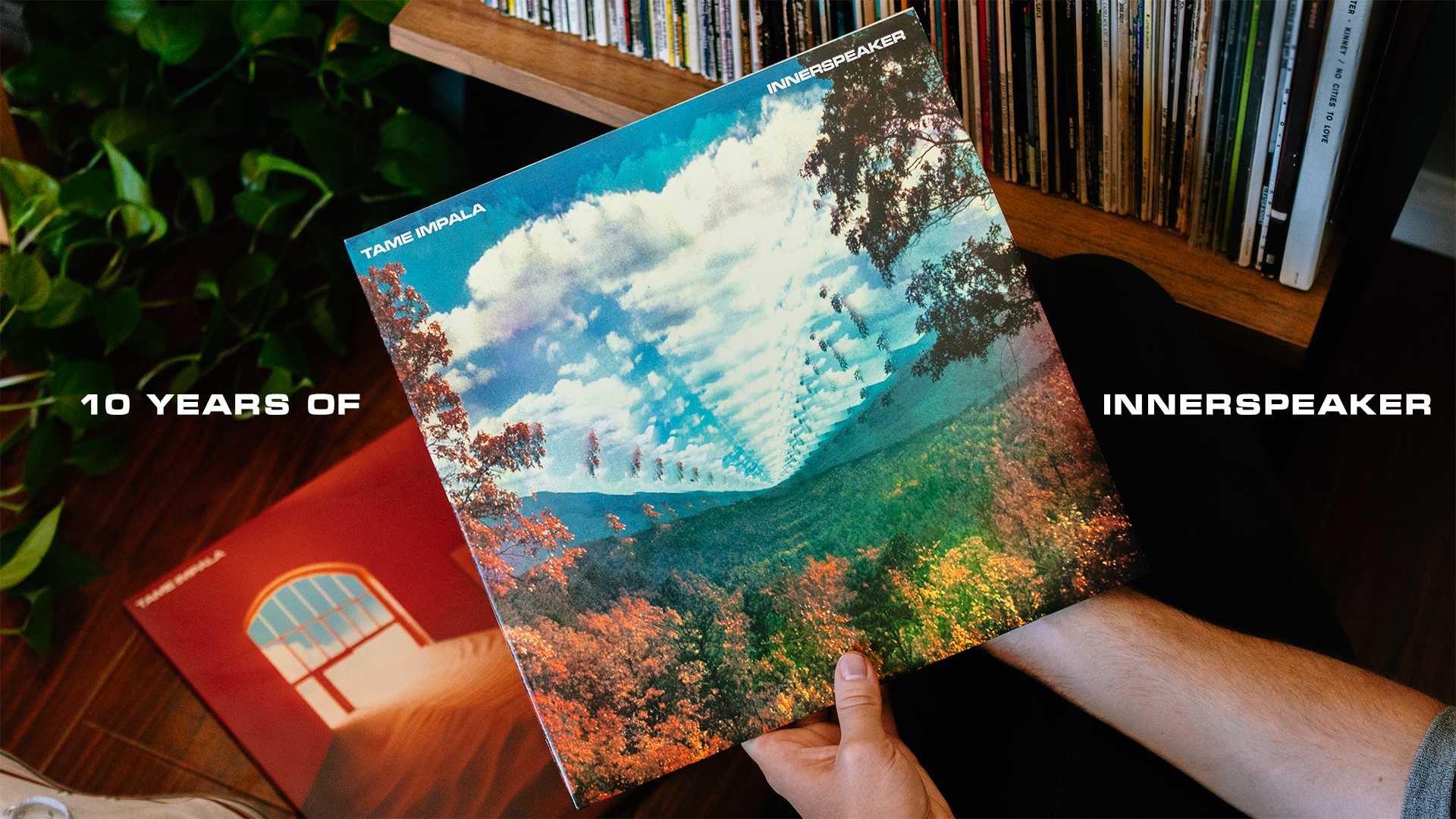 Ten years ago, Australian multi-instrumentalist Kevin Parker and a few fellow creatives exiled themselves in a broken-down beach home four hours south of Perth. There was no internet, phone reception, or even television. Instead, they had guitars, a drum kit, synthesizers, mics, and an eight-track recorder.

The isolation was in service to creative introspection, and the result of this three-month excursion was Tame Impala‘s instant-classic debut. Innerspeaker is so named after the music that plays in one’s head. Parker wrote and recorded the majority of the album himself, filling it with lyrics that reflect the internal dialogues and lonely battles of an introverted existence.

It’s strange that, as we celebrate a decade of Innerspeaker‘s influential presence, we find ourselves in forced global confinement. Parker’s internal psych-scapes hit a little different in quarantine. Even before COVID-19 was a twinkle in the CDC’s eye, Innerspeaker was the 29th most collected and wanted album of the 2010s by Discogs users, and yet there’s somehow, even more, to love in its droning fever-dreaminess now that I’ve spent 60-plus days staring at the same four walls.

Parker’s deep dive into himself was both a celebration of personal strength and perhaps a bit of a last-ditch effort of hide. Two years earlier, Parker made a solo EP under the name Tame Impala and stumbled onto success. It was surreal and sudden, coming on like a hurricane right when he was about to give up on music and enroll in college courses.

At 24 years old, Parker stood at the precipice of musical greatness and international acclaim. Who would blame him for skirting the spotlight and getting in touch with his motives? A decade later, there may be no more perfect album for domestic escapism.

It’s vast, jazzy journeys of sound, so free-form and boundless, guide your mind and melt into the spaces between time. It opens in pure static noise, soft and grey, then wades into warm and murky mood with melodic bass and fuzzy guitars. By the time the drums kick in, giving “It Is Not Meant To Be” some rhythmic spine, the top of your head has opened in swirling, fantastic colors.

Right out the gate, he’s singing about smoking too much weed and not having enough energy to care. Yes, this record has a few love songs, but they’re unrequited. Mostly, Parker kills time thinking about killing time. The second track “Desire Be Desire Go” feels especially relevant with lost-in-the-patter irreverence. Parker sings “Every day, back and forth, what’s it for?” over a deliciously repetitive guitar loop, and it feels like a buddhist mantra.

Two tracks later on “Lucidity” (another song dedicated to stoner senselessness) he sings “Wandering around like spare time never knew it / I might suck, fizzle or I might just float away.” That, my friend, is the kind of zoned-out majesty that can only be found in quarantine’s listless apathy. Close your eyes and chant the simple lyrics of “The Bold Arrow of Time” and you’ll certainly reach Nirvana.

Alongside such untethered poetry comes a lo-fi blend of psychedelic mod rock so blissfully bleached and blazed, you’ve no choice by to leave this Earthly plane. It’s sunny and meandering, heady with low-lidded malaise, while blood-rushing drum lines keep your mind wandering through kaleidoscopic corners. “Alter Ego” has the sense of rushing nowhere fast, while loner-droner “Solitude Is Bliss” pushes a cool blend of soothing tones and head-banging beats.

The space-case collection of muted chaos and brooding brightness was an immediate hit in Parker’s native Australia and garnered rave reviews from critics across the globe. Two years later, Tame Impala dropped sophomore LP Lonerism to even greater heights. Today, he’s a Coachella headline act with two top 5 Billboard albums, the latest of which, this year’s The Slow Rush, was his biggest hit to date.

While his sound continues to evolve and inspire (including a host of rap and R&B artists from A$AP Rocky to Rihanna), Parker has never lost touch with his distorted, rambling, hallucinogenic roots. He finds pop perfection in loose ends and pastoral solitude, a great lesson for us all as we all live and look inward amidst the madness. If you need a little comfort, you’ll find heaven in these jangling riffs and freak-out melodies. Take a page from Parker’s book and turn your own Innerspeaker to 11, then simply lay back, smile, and watch the world turn.