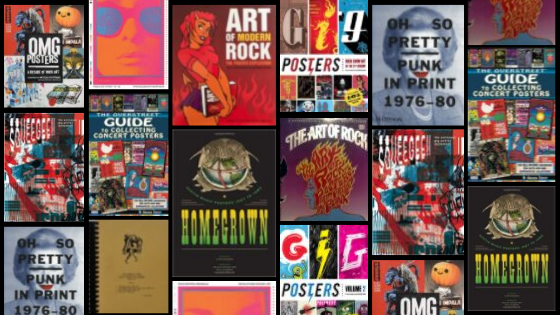 Thumbing through these books on gig posters requires restraint; you’ll probably want to tear out the pages to adorn your walls.

These books on gig posters put together by historians, collectors, printers, and ardent fans are a celebration of music, art and physical media, as well as community and sense of collaboration, both in terms of the symbiosis between musicians and poster artists, and within poster collector circles. You really feel that sense of community radiating from the pages of these books. Despite the artists and icons being from diverse places, eras, music scenes, they’re all tied by a traditional medium, a passion for creating art, and the music. Dan Black of LandLand told Washington Press around the OMG Posters book release, “I grew up going to punk shows in basements and closed-down department stores and pizza places or wherever, and was impressed at a really young age by the idea that everyone’s got a part to play in keeping communities like that alive and moving forward.”

Whether you’re interested in getting more of a poster fix, or looking for a jumping off point to get into collecting, there are countless books on the subject that allow you to get a closer look, learn about the history behind them, including the artists who created them, the musicians who inspired them, and the wider social movement in which they were created. These are a few of our favorites for getting a diverse glimpse of posters from across the world, from their earliest conception, to contemporary gig posters and art styles being printed today. 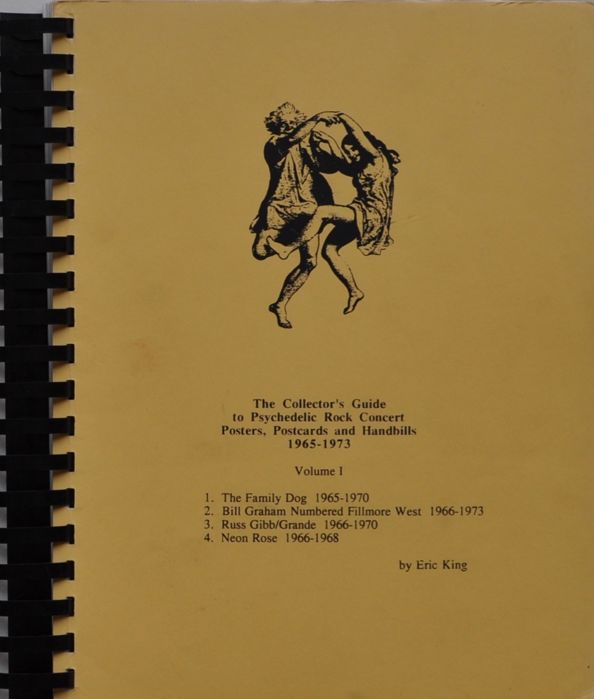 Considered an absolute essential for anyone even mildly interested in collecting posters. Eric King is a psychedelic poster historian and an absolute authority on the subject. The earliest version of the guide was just a quarter inch thick with basic info and no images. Now in its 11th edition, the guide covers posters, postcards and handbills issued by Family Dog, Bill Graham, Russ Gibb, Victor Moscoso, and more. He includes images, alongside his uniquely qualified artistic and philosophic opinions on the artwork.Each item has a unique identification number and is cross-referenced as the culmination of over 45 years of study. Fillmore artist and designer, David Singer has said that Eric King’s knowledge is so extensive, King has told him things about his own work that he didn’t even know himself.
You can get a taste of what King’s guide includes and the level of detail he goes into on his website, and pick up a copy of his book directly from the source. 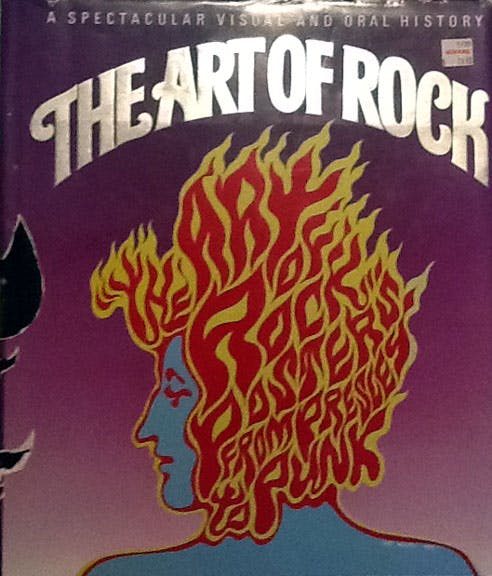 A great jumping off point for those interested in learning more about rock posters across several eras. With over 1500 colorful images, it uncovers how music and poster scenes from years gone by have influenced contemporary poster art, with close attention to how the pervasive, groundbreaking art of the ‘60s continues to influence, inspire, and provoke innovation in the poster art scene. Charting the beginning of rock art with bill advertising Elvis, B.B. King and Howlin’ Wolf, through the mind-bending psychedelic posters of the ’60s, featuring the Dead, Dylan, and The Doors, through to the DIY, stripped back aesthetic of punk in the ’70s. 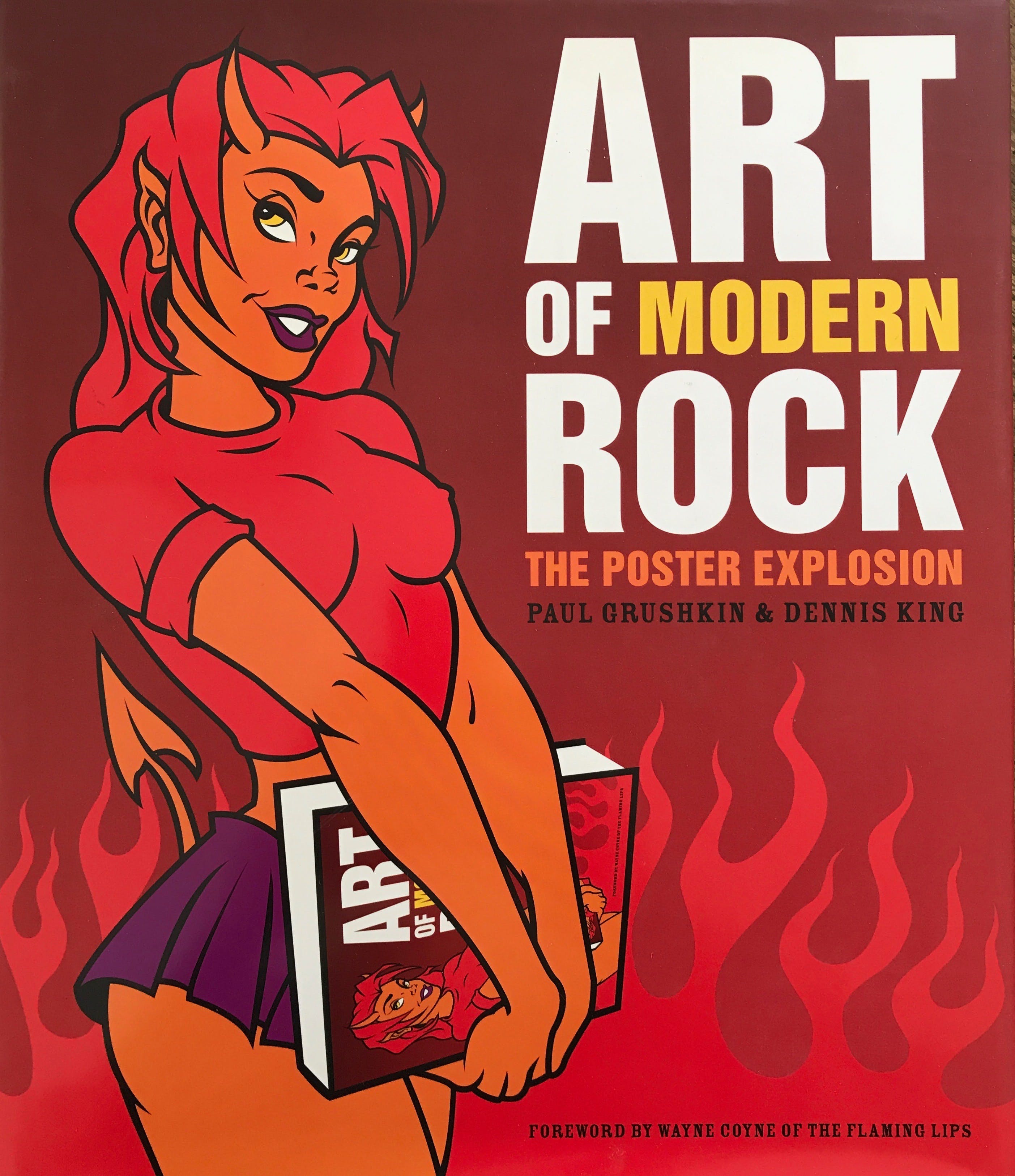 Picking up right where the Art of Rock leaves off, Art of Modern Rock follows the art as it evolved with the growing independent music scene and so-called resurgence of gig posters credited by some to the indie bands of the early 2000s. Speaking to NPR’s ‘Hearing Voices’, Grushkin said he looked about over 9000 pieces of art when making this book, trying to find pieces that resonated. “Kids are feverishly cranking out poster art. It’s no surprise that you have 100-times over across America mini explosions of poster art – happening on a grassroots level in the music scenes. At least 75% of it is for totally obscure bands, but the thrust of rock ‘n’ roll in this day and age is to be one of these bands. Posters are the tool to help discovery of these artists,” says Grushkin “If we remember and accept that there will always be rock’n’roll, people will always be making rock’n’roll, it’s really exciting to look forward to the rock posters that will be happening 10 years from now.” 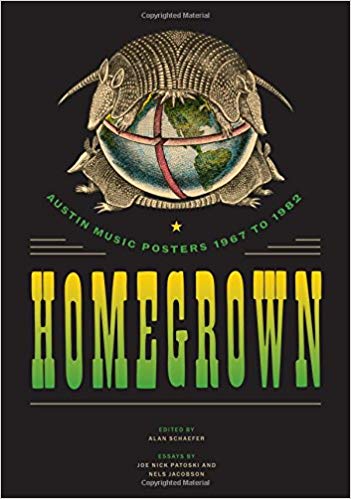 Focuses on posters for venues at the Vulcan Gas Company and Armadillo World Headquarters, which hosted both local acts, as well as big-name headliners with psychedelic leanings. The book charts the rise of the distinctly Texas art aesthetic, and how the movement transformed Austin from a sleepy town to a serious hub for music and art. Posters and the artwork produced were an integral part of this transition. One of Vulcan Gas Company’s artists told Nels Jacobson, writer of an historical essay for the book “The posters were so popular the printer would find young enthusiasts rooting through his trash in search of misprints and rejects.” 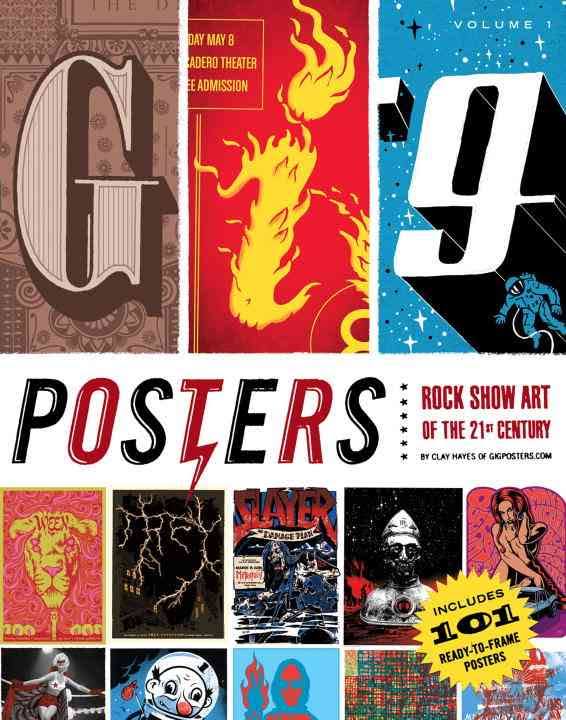 From the creator of the now defunct and much-missed, Gigposters.com, Clay Hayes put together highlights from their archives. Combining contributions from leading designers, like Rob Jones, Steve Walters, Jay Ryan, Gary Houston, and more, they offer commentary and behind-the-scenes insight about the medium deemed under threat due to the rise of MP3s and digital art.
The first edition was so warmly received that Hayes decided to put out a second volume. The second contains 700 more posters from the Gigposter.com archives from artists like Tyler Stout, Marq Spusta, Peter Cardoso, featuring a diverse range of bands like Flight Of The Conchords, Queens Of The Stone Age, The Black Keys, and Norah Jones. One fan said the only problem with these books is that it’ll make you want to buy half the contents in them; the only challenge is money and wall space. 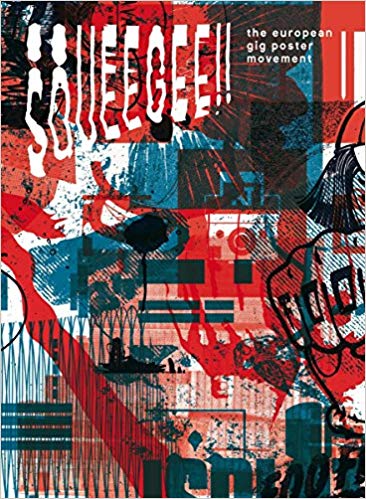 Many of the available books on posters a strong American focus. Squeegee!! offers a look at what’s going on in the poster scene on the continent. Squeegee!! is a DIY self-printed showcase of European screen print gig posters, artists, and studios, which raised almost €10,000 when it launched on Kickstarter in 2016. It’s also an introduction to local and international poster shows, like Flatstock, Colored Gigs in Dresden,  and Le Gig Poster. 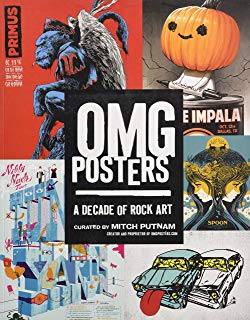 Another modern take on the gig poster of the foremost rock and indie bands, pulled together by Mitch Putnam, founder of the blog, OMG Posters. The book features around 400 works featuring bands like The National, Spoon, Thee Oh Sees, and Beach House, from artists including James Flames, Richey Beckett, Invisible Creature, delving into their portfolios, personal backgrounds, and their techniques and inspiration. It’s a celebration of of tactile, physical artifacts in the age of disposable, digital culture. Jason Munn says of his posters, “If my work only lived digitally, I don’t think I would be interested in making it. Honestly, the printing is what brings each piece to life.” 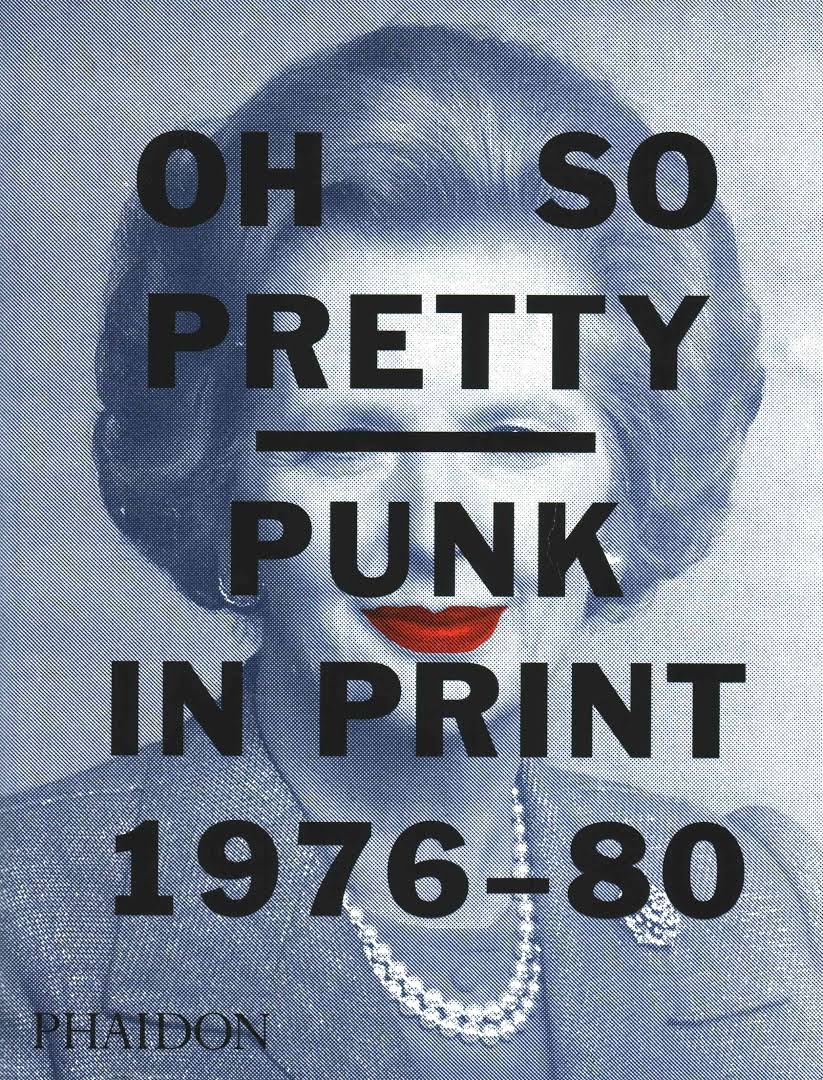 Zeroing in on such a particular era doesn’t feel constricting for this book but allows focus on what made this whole movement so unique and impossible to reproduce. Focusing on British punk posters, the book presents 500 gig posters, flyers, badges and ‘zines from artists ranging from unknown to now famous. While the DIY aesthetic made these pieces seem disposable at the time, pieced together for the book, they illustrate the social movement that brought together music, history, class, and art in a way that few other scenes and collections have managed. Mott was heavily involved in the movement at the time, as founder of the Anarchist Street Army in the late 70s. As an artist, he founded the art collective, The Grey Organisation responsible for the iconic De La Soul album cover for 3 Feet High And Rising. Mott’s own collection features essential punk artifacts, like Jamie Reid’s “ransom note” designs for the Sex Pistols, Linder Sterling’s “Orgasm Addict” artwork for the Buzzcocks, and Barney Bubbles’ work for Ian Dury. 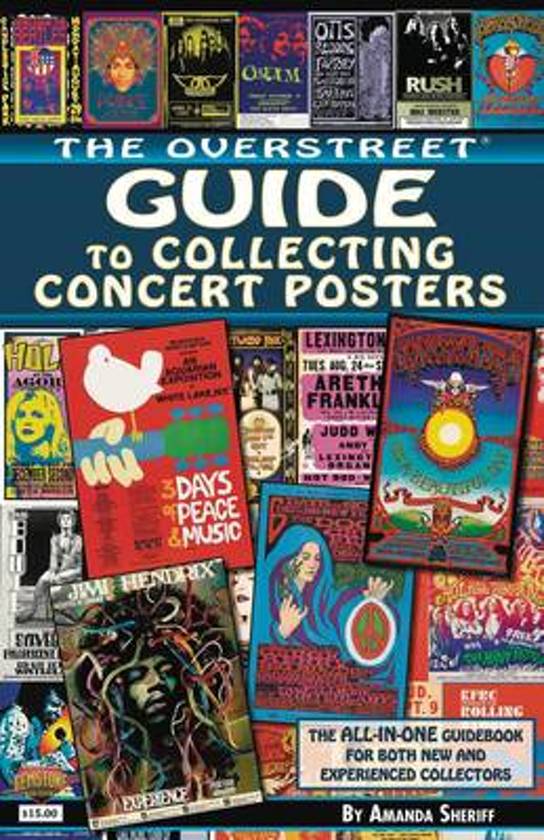 Overstreet Guides are a legendary resource that’s been around since the ’70s for collectibles like comics, video games, film posters, and now concert posters. Their concert poster guide is a valuable resource for seasoned collectors and newbies alike, with biographies, interviews, storage tips, stories about classic venues, pricing trends, the history of Certified Guaranty Company’s third party grading, and more. With articles covering the work of The Beatles club concerts, The Doors, Janis Joplin, Jefferson Starship, Patsy Cline, to Prince, Aerosmith, KISS, and Tina Turner‘s poster art and profiles on the artists who created some of the most iconic art of the era. From Wes Wilson and Rick Griffin to Mark Arminski and Frank Kozik. 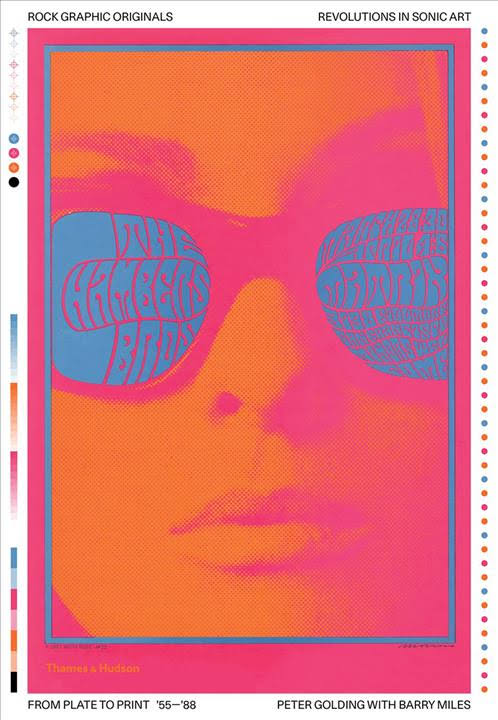 This is a great primer for rock poster art, especially the psychedelic art of the ’60s. Focusing on the so-called San Francisco Five: Victor Moscoso, Rick Griffin, Stanley Mouse and Alton Kelley, and Wes Wilson, the book delves into their influences and artistic choices. These were the artists who redefined the humble advertising medium, turning it into an artistic statement in their own right. In this book you learn about their processes, motifs that occur throughout work of this era, and how their aesthetics have endured to become synonymous with the music, time, and place.