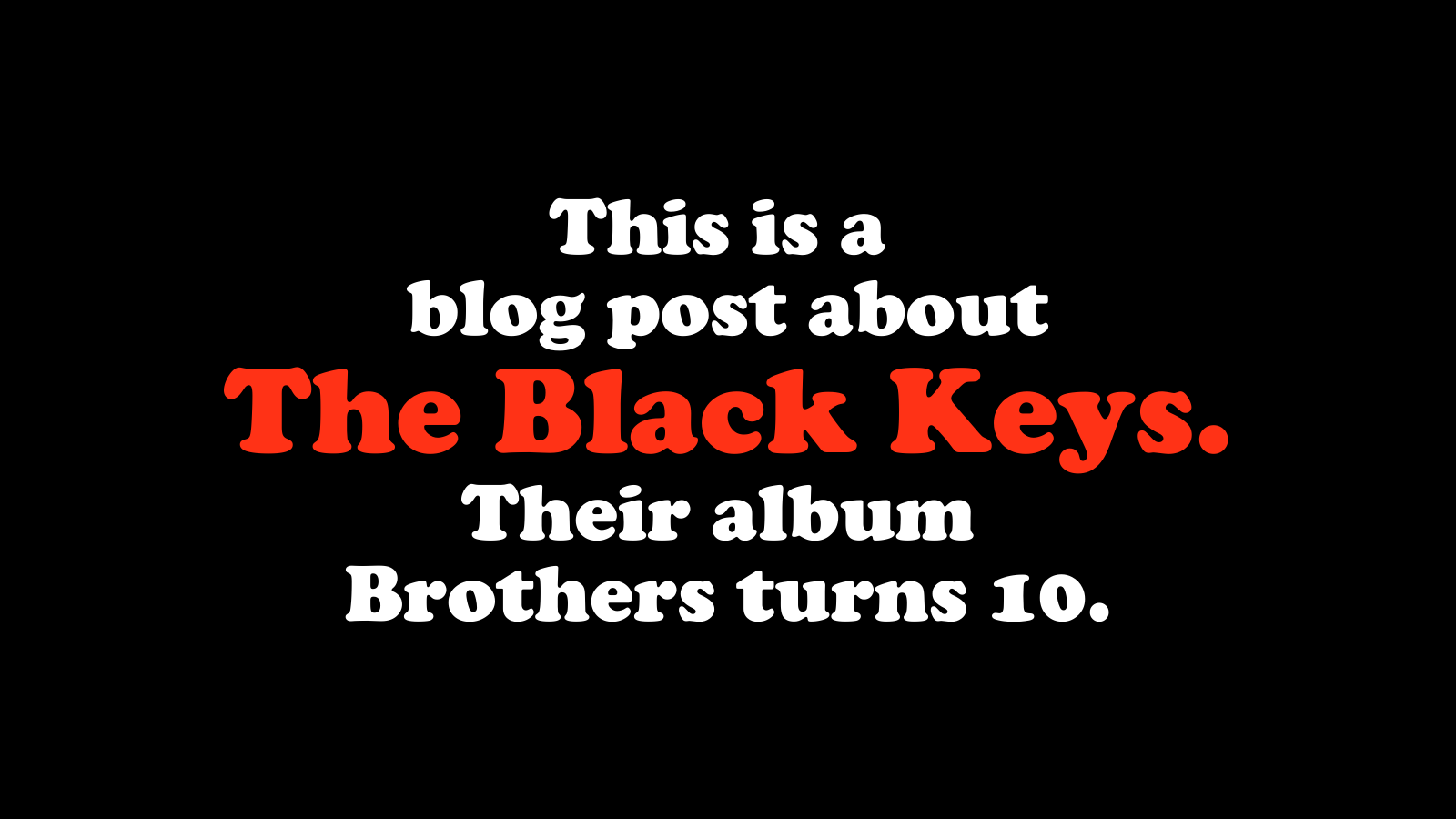 The air is full of renewed youth and optimism, and yet one of the year’s greatest musical successes is a fuzzy, old-school blues-rock breakout from a band 10-years deep into a slow-boil career. The album’s 15 tracks tell stories of broken love and lost innocence, and despite its utter lack of synthesizers, Brothers swept the Grammys and turned The Black Keys into worldwide headliners.

“It’s a weird thing to happen 10 years into your career,” drummer Patrick Carney tells The Guardian in 2011. “It’s been so gradual that you don’t notice it. One day you look out and the audience consists of 65,000 people. It’s like looking in the mirror, and one day you realize you’ve gone grey.”

At the precipice of Brothers‘ own 10-year anniversary, the record stands out as the moment it all changed. Where once they were labeled simple derivatives of fellow early-aught garage rockers The White Stripes, The Black Keys perfected a complex and self-produced sound. With infectious hooks and lo-fi electric guitar, the duo weathered its own messy brand of accessibility. They “sold out” without ever losing their edge, tracking muddy authenticity into mainstream appeal.

Nothing that looks easy ever is. A lot of puzzle pieces had to fall into place for Brothers to take off. Carney and his partner Dan Auerbach, who handles vocals and guitars, first met as scab-kneed 8 or 9-year-olds. They grew up in the same neighborhood of Akron, Ohio. By high school, they were jamming together with a four-track recorder, and in college, they committed to a band.

The Black Keys’ first LP, The Big Come Up, roared into critic’s hearts in 2002. Recorded in Carney’s basement with an 8-track, the sound was rough and raw, a compilation of classic Delta blues tunes and chunky, biting originals. The sonic power of Auerbach’s wail and crushing guitar against Carney’s driving rhythms was an instant hit with the garage-rock revival, even as it drew comparisons to the aforementioned duo from Detroit. They were rough around the edges, but Thickfreakness was the fast result. It brought tour slots opening for Beck and Sleater-Kinney, as well as a set on Late Night with Conan O’Brien, but a few cool looks does not make a financial hit. After a Europe tour left the band in the red, they caved to a series licensing agreements. This was the real root of The Black Keys success. It started with a Nissan spot and led to more than 300 placements in TV shows, films, commercials and video games. The Black Keys’ swampy sound became to permeate consumer minds, wittingly or not. It’s 2004 LP Rubber Factory landed at No. 143 on the Billboard 200. It would take one more tweak before The Black Keys were ready to be prime time players, and that would come from Danger Mouse. In 2007, The Grey Album artist, born Brian Burton, contacted The Black Keys to collaborate on a project for Attack & Release. It was a huge shift for the duo who had so far recorded its own material in their homes. Burton’s smart and respectful input brought instrumental flourishes that added pop to the band’s sound without dampening its raucous roots. The fleshed-out compositions gave the bluesy band a new dimension. Attack & Release debuted at No. 14 in the month of its release.

It started to look like the hard-working boys would have their day in the sun, but emotional storms brewed to tear the ship apart. Carney’s financial success bit him in the heart. Life became a bitter country ballad, complete with a cheating wife who sleeps with your best friend and takes you for your money.

The drummer became despondent, and communication with Auerbach broke down. The singer started work on a solo record, Keep It Hid, released in 2009, a wry title given that the album was made without any knowledge to Carney.

“I told him about it, but he likes to think I didn’t,” Auerbach told The Guardian. “Pat was going crazy at the time. He was in a really dark place, wrapped up in a shitty life with a complete asshole of a girl who cheated on him and treated him like shit. He was stuck in this awful situation and just needed to get through that.”

Heartbroken and feeling backstabbed, Carney stopped talking Auerbach completely and started his own side band, Mark Neill‘s house produced a single track called “These Days,” a sad, nostalgic song that looks back on one’s life and wonders if it could have been different.

Inspiration burned, and they followed the flames to Muscle Shoals Sound Studio in northwest Alabama. They purposely chose the historic studio, hoping to color the music with southern character. The Rolling Stones and Paul Simon had recorded there, but the Brothers sessions were the first recordings laid down in those rooms in 30 years.

“Next Girl” was the first song written in Muscle Shoals. It helped shape the direction of the album and brought Carney out of his fog. The strange studio set-up did influence the sound. Songs were kept simple so as not to clutter Neill’s shipped-in 10:2 Studer mixer. The acoustics of the room amplified mid-range sounds, moving their ears to mix the bass up accordingly. The warm, bass-heavy result mixed with straight-forward riffs and melodies gives Brothers a groovy, often catchy voice, even as it explores themes of pain, sorrow and heavy-heartedness.

Brothers is a collection of love songs, told from the point of view of those who can’t have the love they crave. The women in these songs are powerful, conniving, vengeful and impossible to forget. On “Next Girl,” the singer moves on, but on “Tighten Up,” “Howlin’ For You,” “She’s Long Gone” and “The Only One,” our hero is weak against a woman’s charms. There is plenty of growling blues in its “Black Mud” crevices, like the organ-tinged darkness of “Ten Cent Pistol” and harpsichord haunt of “Too Afraid To Love You,” but the forlorn shadows are outnumbered by upbeat desire.

There’s doo-wop romance on album opener “Everlasting Light” and synth-laden falsetto on “The Only One.” The albums single cover, “Never Gonna Give You Up,” fits in that rosy R&B hue. The true royal earworm is of course “Tighten Up,” the only tune on the LP produced by Danger Mouse that may lack a true chorus but makes up for off-center song structure with a prominently and instantly-infectious whistle hook.

“Tighten Up” is the song that brought The Black Keys to the mainstream. It spent 10 weeks atop the US Alternative Songs chart and was the first to break the Hot 100. The whole album sold 73,000 copies in its first week out and peaked at No. 3 on the Billboard 200. “Tighten Up” even earned the band a Grammy for the Best Rock Performance by a Duo or Group with Vocals. Overall, Brothers won three statues, including Best Alternative Music Album, among five total nominations.

Brothers was anything but an overnight success, but the album’s title reflects Carney and Auerbach’s unbreakable bond. These true life partners never lost sight of who they really were, and they broke through the noise of mainstream radio by staying true to themselves. It was a long, hard, hurdled road, and no one can ever say The Black Keys had it easy, but through deep introspection and unwavering dedication to the roots music that runs deep in their veins, they not only carved a place for rock’n’roll in the neon future, but gave dirty garage rock a solid crown.