On May 19th, 2018, The Brooklyn Flea Record Fair returns to East River State Park in Williamsburg, Brooklyn, with its spring installment. Taking place every May and September (plus a mini-version in February), The Brooklyn Flea Record Fair connects fifty-plus vendors to thousands of collectors throughout the day, providing heaps of records, books, CDs, cassettes, clothing and other memorabilia. Vendors include Domino, Secretly Canadian, Awesome Tapes From Africa, Minimal Wave, Mute, Human Head, and Sacred Bones, plus newcomers The Mixtape Shop, New York Trax, Nublu Records, and CLEAR USA. Discogs is excited to support the Brooklyn Flea Record Fair for the first time, and we will be in attendance, making our first trip to New York City for an event in several years! In anticipation of the show, we spoke with Brooklyn Flea Record Fair director Amanda Colbenson.

Can you give us a brief introduction to yourself?

I organize Brooklyn Flea Record Fair, which takes place twice a year outside in the East River State Park in Williamsburg, Brooklyn right along the waterfront and next to the open-air food market, Smorgasburg. I also work at record label Ghostly International and previously managed East Village Record Store Other Music.

Can you tell us a bit about Brooklyn Flea Record Fair and its history?

The Brooklyn Flea began in 2008 in Fort Greene, Brooklyn and since then has grown in size and scope, now also including the Smorgasburg food market that takes place in six locations spanning New York, Los Angeles, and Osaka. Just months after starting the Flea, the founders Eric Demby and Jonathan Butler, who are big music heads, held the Superstar DJ Record Fair which included their DJ friends plus a few local businesses including Other Music. After a few years of working on the Superstar fair on behalf of Other Music, I approached Eric about expanding the event – making it twice a year and including more record labels, stores, and collectors. We changed the name to the Brooklyn Flea Record Fair, placed it next to Smorgasburg (which Butler & Demby started in 2011) and the rest is history. We did the first round in May 2012 with 35 vendors and now are entering our sixth year and going strong with sixty vendors and an average of twenty-thousand attendees. 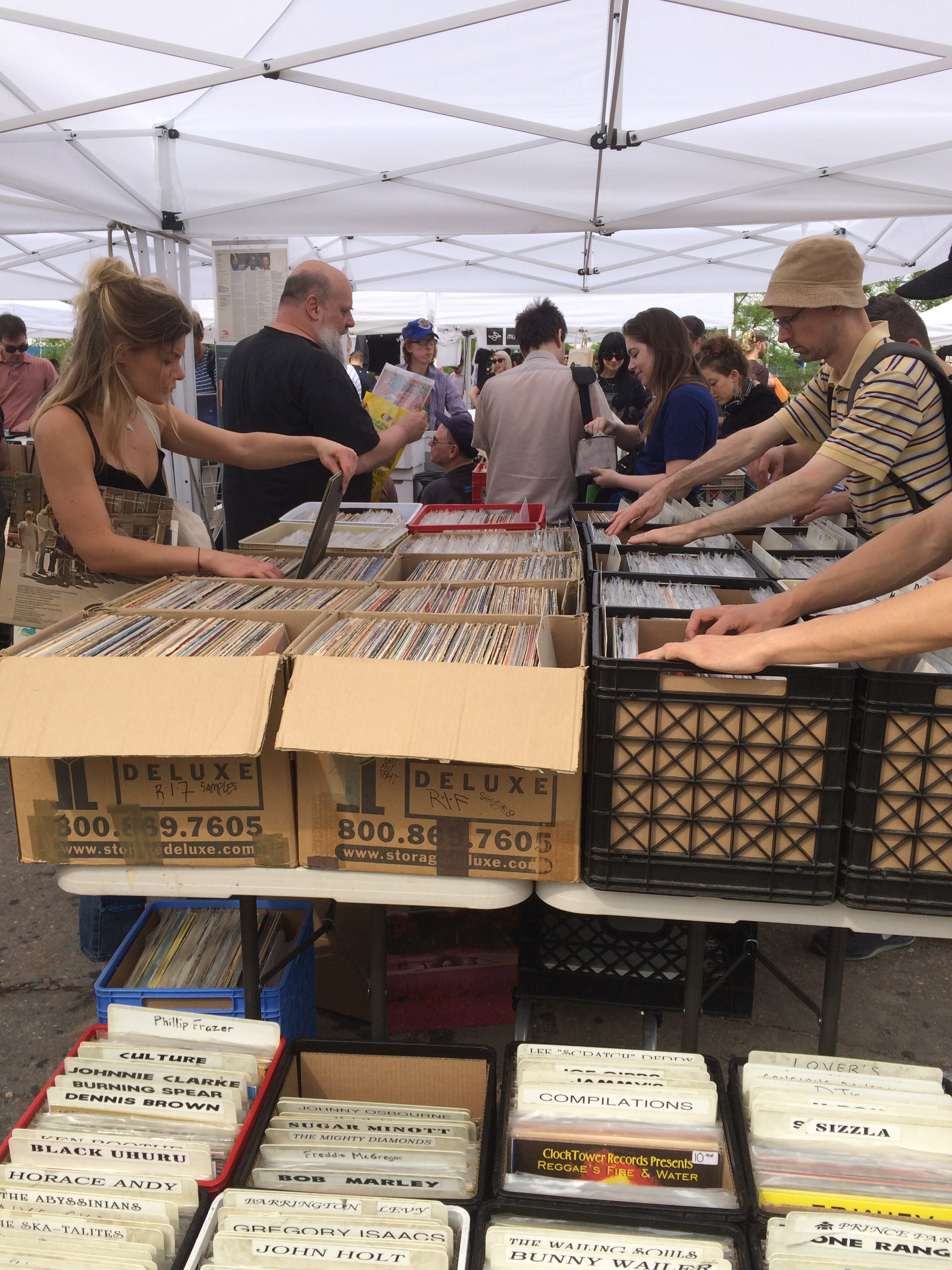 As previously mentioned, in addition to having record collectors and stores, over half of Brooklyn Flea Record Fair is comprised of record labels. This is not necessarily a new concept, Independent Label Market has been doing it for years in London and MoMA PS1 now holds their Come Together Market in March, but still having so many different labels together (27 and counting for May 19) brings a special energy to the event. Unlike many collectors who pay their bills selling records on the weekends, the labels involved rarely make a huge profit from the day but are primarily there to connect with their fans and with each other. There’s a wonderful supportive spirit that floats over everyone involved on that side and can lead to really memorable moments. The spectacular view of the Manhattan skyline reflecting on the East River doesn’t hurt either.

What can people expect to find at Brooklyn Flea Record Fair?

A diverse and enthusiastic crowd spanning ages, races, and genders. Some are serious diggers, others are just starting their collection and looking for the essentials. There will also be a LOT of foodies out to check out the 100-plus vendors at Smorgasburg – the market attracts an average of twenty-thousand each Saturday!

Do you have any memories from past Brooklyn Flea Record Fairs that stand out?

All special edition and out-of-print items brought by record labels including: super out-of-print Broadcast back catalogue that Warp brought one year, Goodnight Records’ homemade ginger ale, Ba Da Bing!’s shrinky dink Dead C key chains, and of course Minimal Wave’s delicious logo cupcakes. When Flying Lotus made an impromptu visit and started signing autographs. Next thing there were fifty people lined up. One fellow even had him sign his bare chest! Carolina Soul displaying and selling twenty copies of Songs In The Key Of Life in under an hour. 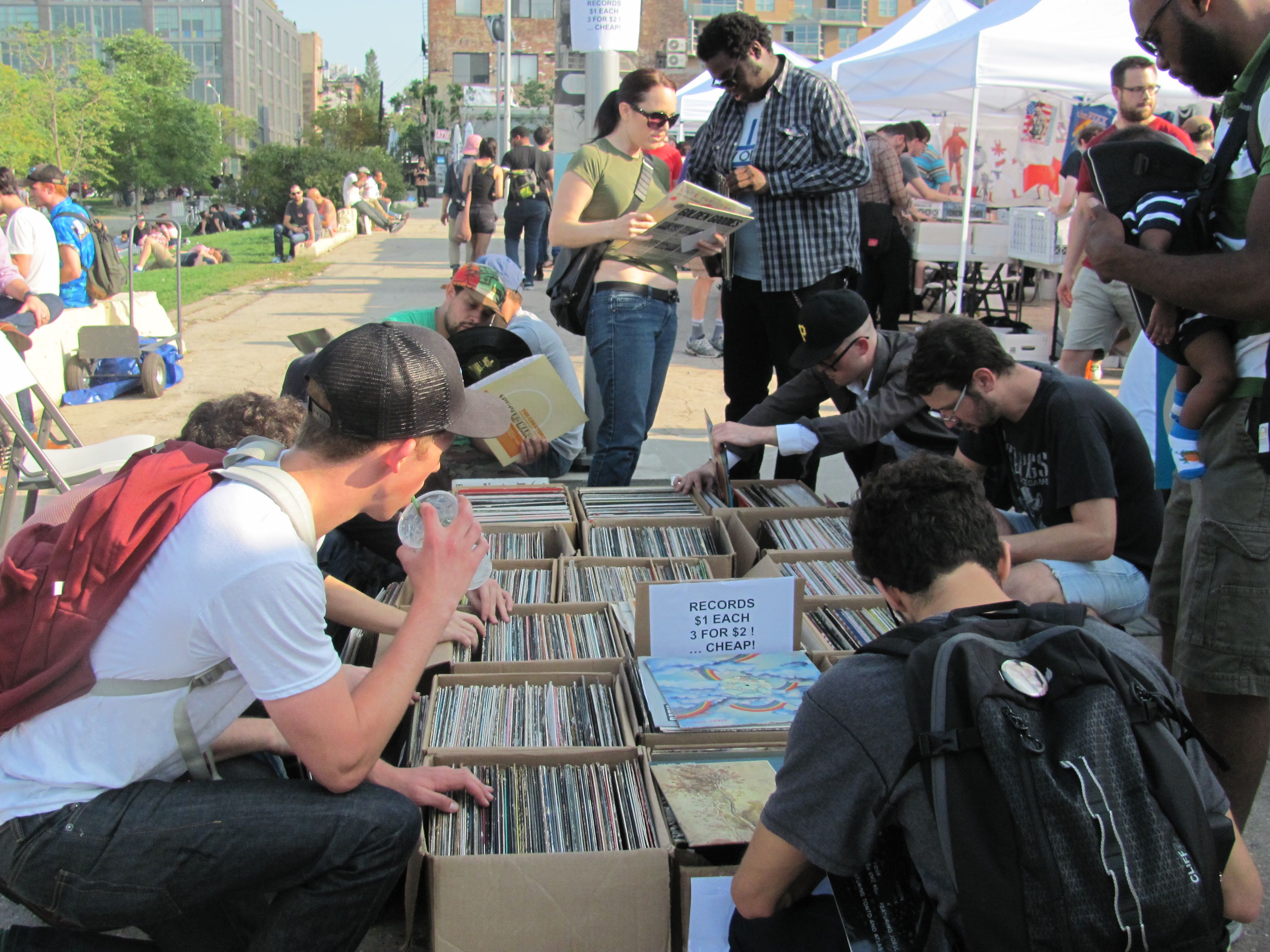 60s onwards Rock, Folk, Pop, Disco, World, Psych, Kraut, New Wave, Minimal Wave, Funk/Soul, Jazz, and Electronic. Original pressings and reissues (I’m not too picky!), plus a bunch of 45s filed in no particular order (one day I’ll have the time to tackle them.)

Any pro-tips for buyers and sellers?

RSVP here for the event here to enter to win a fun prize pack including “Smorg Bucks,” drink tickets, and LPs from many of the labels involved. Come early to avoid digging queues and the lines at Smorgasburg. Bring water- always good to keep hydrated!

Whether you can attend on May 19 or not, you can always follow us on Instagram and Twitter to keep informed of everything leading up to Brooklyn Flea Record Fair and day of (lots of stories!), plus see some mouth watering food pics! Our handles are:

The spring 2018 edition of The Brooklyn Flea Record Fair takes place on May 19th at East River State Park from 11am to 6pm, next to Smorgasburg. The all-ages, family friendly, free admission event features 60 vendors including record stores, labels, and collectors, as well as live DJs and a beer garden from 1 to 5! We’ll see you there!