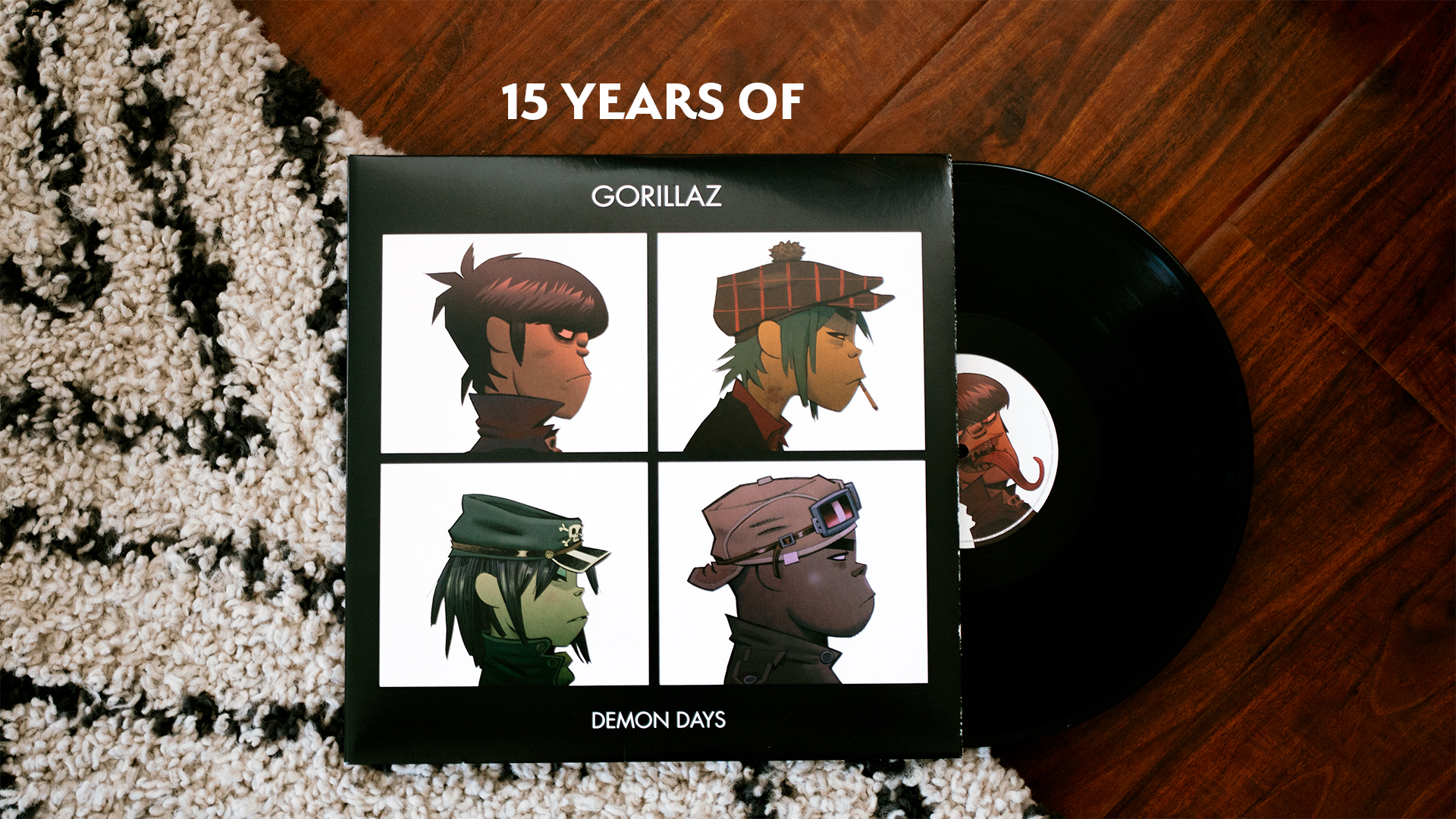 By 2005, it sounded like a United States President announcing “mission accomplished” for a war far from over. It sounded like the cries of global warming being a bigger threat to humanity than what that same President went to war over. It also sounded like a dystopian dance party thanks to Gorillaz’s seminal sophomore album Demon Days, because dancing through an apocalypse may be the only way to get people to focus on the ridiculousness their world had become.

For more than 20 years, Gorillaz has mostly existed as a four-person animated electronic band for Blur frontman Damon Albarn to experiment without being the face of the results. The world crafted in Demon Days is infused with that same ethos. Nothing is as it seems on the album and familiarity is a landmine waiting to blow your expectations away with what usually comforted. Youth choirs sound angelic while carrying an ominous message of children being bred to be soldiers on “Dirty Harry.” “O Green World” sandwiches a sorrowful yearning for a return to better times between a harmony of computer beeps, white noise static, and chanting that sounds more like the end of a dance party rather than the end of the world.

In that way, Demon Days is the rare album that paradoxically disorients you into hyperfocus like journeying through a snowstorm. The malleability of Albarn’s monotonous, almost robotic, vocal tone was the perfect as a narrator through an album that wavers between divergent extremes frequently on songs.

The poeticism of Albarn’s lyrics on Demon Days also buoyed the album’s message to the front of your mind by giving corporeality to the ineffable; flesh to phenomenon, because the end of the world is more depressing when you see the life in everything around you.

Albarn’s despair over losing the warmth of joy goes from sad to downright apocalyptic when he sheepishly cries “summer don’t know me” as if he’s losing a connection with a part of the world he knew that was always inevitable. When someone quivers their lips to utter “morning comes, it doesn’t say an awful lot to me,” as Albarn did on “All Alone,” his despondence is palpable because a new day is an inevitability, but hope isn’t. The “relentlessness of alcohol,” according to Albarn, isn’t explained but felt on “White Light” by grating listeners’ ears with an avalanching non-stop distortion and aggressive guitar licks. The sound of the album was just as important as carrying the overall message of calamity as was the lyricism.

The group’s autobiography 2006 Gorillaz: Rise of the Ogre described the sound of Demon Days as “a duality between electronic claustrophobia and mournful acoustic refrains.” From the start, Demon Days’ production helps make the album a sadistic listening experience where the sounds suffocate until you yearn for more. From the start of the “Intro,” you’re swallowed by a cacophony of police sirens, sinister tribal drums and eerie warped voices asking “who put chemicals in the food chain” as if to detach you from any sense of normalcy before you entered Demon Days.

The album’s sound shows you the end of the world through a kaleidoscope; different shades of the same calamity. Demon Days sounds like it’d fit perfectly fit today because of the album’s biggest addition: Brian “Danger Mouse” Burton.

A month before the album would hit shelves, Albarn revealed Danger Mouse replaced Dan “The Automator” Nakamura, music producer for the Gorillaz’s self-titled debut album, due to the intricacy of the album’s sound and Mouse’s proven proclivity for melding ostensibly divergent musical worlds into a harmonious orbit as he did with his breakout experimentation tape The Grey Album. Mouse merged Jay-Z’s acapella vocals from The Black Album, his final album before his first “retirement,” with The Beatles instrumentation from The White Album to iconoclastic brilliance, taking great music’s elasticity through time and more than likely catalyzing a new era of rap-rock collaborations that resulted in Jay-Z and Linkin Park’s mashup EP Collision Course, released nine months after The Grey Album.

Demon Days is the first major full album of original music Danger Mouse helped steer the musical direction for and it wouldn’t be a sound we’d soon forget for years. The nimble balance between the zany cartoonish, the dark pop, and hip-hop fundamentals on a song like the MF DOOM-assisted “November Has Come” can only be achieved by someone like Danger Mouse who would later do an entire project with MF Doom using that sound (The Man & The Mask) and CeeLo Green (St. Elsewhere) in less than a year after Demon Days. The muddy electric guitar riffs of “Every Planet We Reach Is Dead” is in the same bluesy universe as The Black Keys’ 2010 album Brothers, which Danger Mouse co-produced.

Over the last 15 years, the album’s lasting legacy rests in the irrepressible funk of the Rosie Wilson and Shaun Ryder-assisted “DARE.” The only song from the Gorillaz’s discography to top the U.K. Top 40 chart is a slingshot at hyperspeed into the middle of an intergalactic dance party. But, it’s the underlying message of perseverance that gives the song its timeless feel. For all the doom and gloom that permeates the DNA of Demon Days, the album was a warning more than a prophecy, and it’s in the difference between the two where you can hear the hope for humanity in Demon Days underneath the apocalypse.

Keith Nelson Jr.
For nearly a decade, Keith Nelson Jr. has been a critical voice in the music, TV, and culture space. He's a writer by fate, a journalist by passion with bylines at REVOLT, ONE37PM, Billboard, Vibe Magazine, Okayplayer, REVERB, and LEVEL Mag.
3 Comments