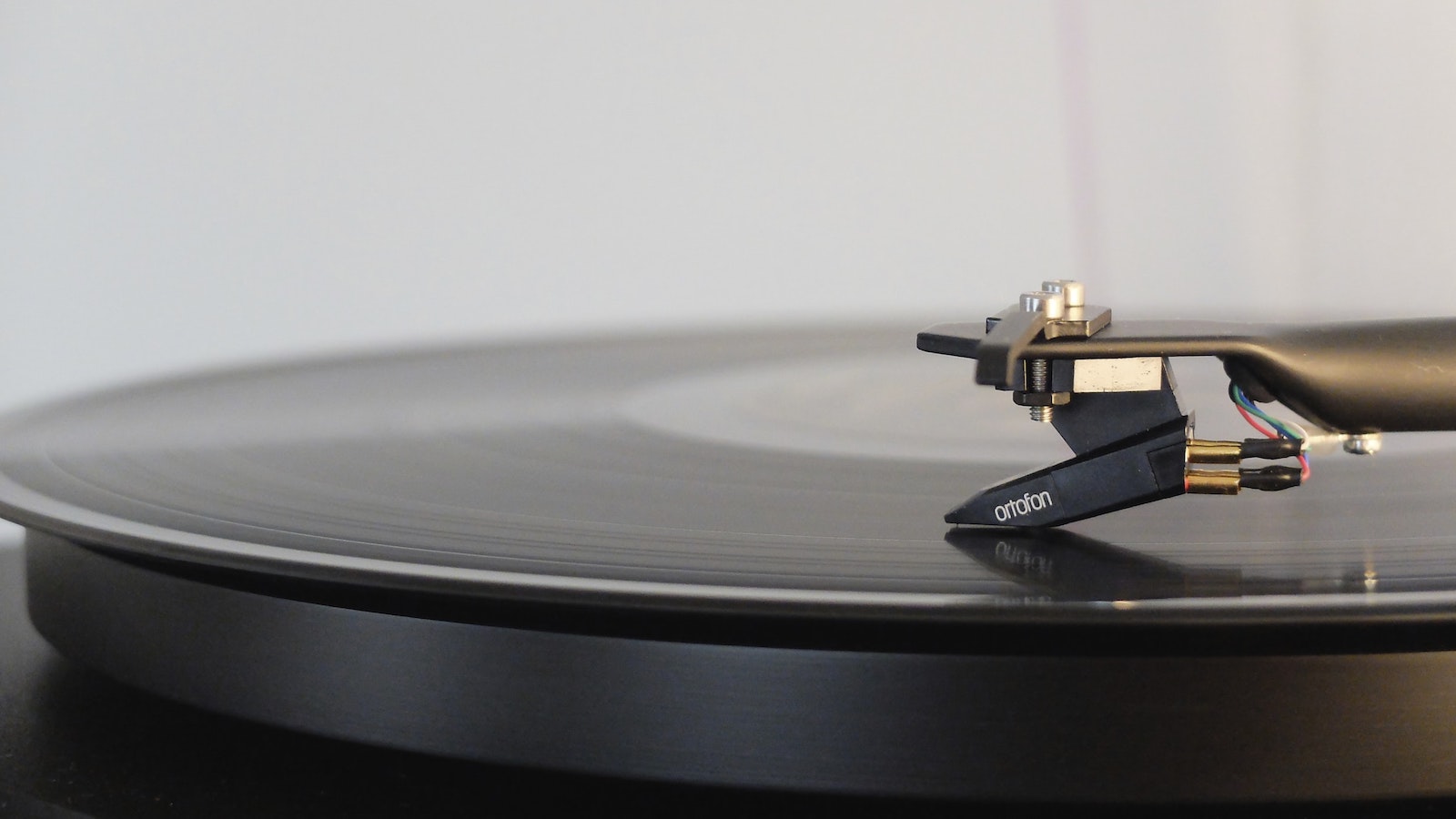 If you work for Discogs, you have to like music. More accurately, you have to live and breathe music. Even if this sounds like a cult requirement, this is true and we think it makes a lot of sense, given that all employees are exposed to music in the office at all times. Unsurprisingly, the music channel is one of the most active channels in the Discogs company chat. It is the place to play your latest finds, share your passions with your colleagues, show off your exquisite musical knowledge and preferences and (playfully!) mock your coworkers for their terrible taste.

But while the channel is interesting in the day to day, there was no way to get a historical overview of what music was getting played the most at Discogs offices. I thought it would be interesting to dig into this data so I parsed through 49.114 messages from our music channel, starting on March 2014 and ending on May 14th, 2019.

I found 3,306 messages about what people were playing or listening to at that given moment. For each of those messages, I called the Discogs API for the relevant release information and based on this data I compiled some statistics on that music, the results of which you can find below.

There’s a couple of caveats. There’s no standard to whether or how people announce what’s currently hitting their eardrums. Some of my colleagues are very good at telling their colleagues what they are playing in a standardized format, while others are terrible at announcing what they are playing at all. I also only included Discogs release or master links, so there’s no Bandcamp, Spotify, YouTube, SoundCloud or livestreams in there. But with those disclaimers out of the way, let’s dig into the data1.

All in all 2,498 artists have been mentioned in the channel, with an average of 1,37 plays per artists, a fairly long tail distribution. Coming in at first place, with 96 plays we have the legendary various, but excluding that placeholder, below are the 27 artists that have received more than 5 plays (the number of plays is the number after the artist names):

An eclectic mix for sure, some jazz and rock classics along with newer more electronic fare. You can view the rest of the artists played (and all the other data) in this spreadsheet.

For labels, we’ve played releases on 964 of them, with an average of 1.66 plays per label. I think we get a bit of music nerd cred from the fact that Blue Note and Warp Records have been played more than any of the major labels. Here are the 33 labels that have received more than 5 plays:

Electronic and rock are by far the most played genres. Coming in close but with more than 4 times as many plays as Pop, Jazz, Funk/Soul and Hip Hop which are the next genres on the list. 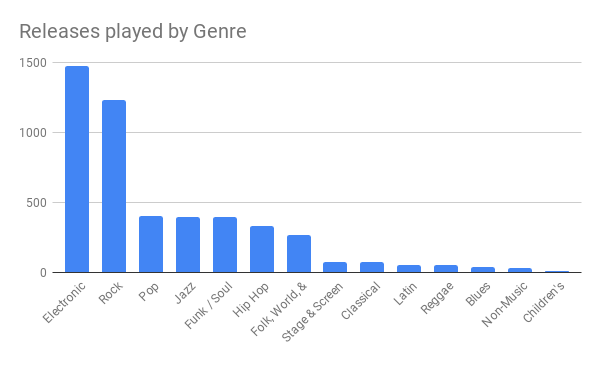 For styles, we seem to like our music Experimental. We’re also into Ambient, Indie Rock, Downtempo and Techno. 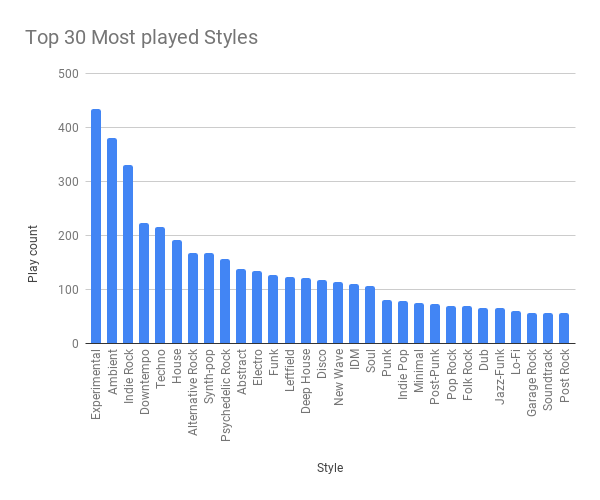 We seem to play mostly new music, music from the 2010s features way more than any golden oldies: 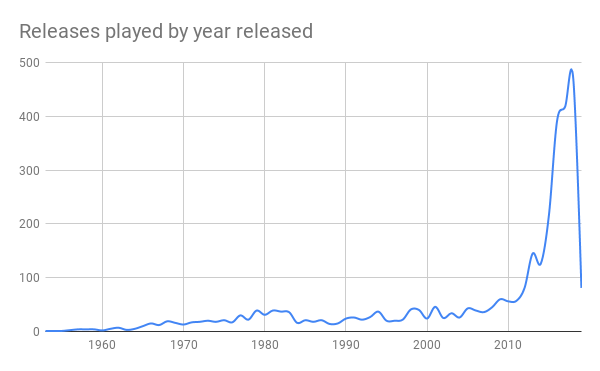 And if we look at when we’ve played the most music, it seems to be ramping up all the time. This makes sense, there are more people working at Discogs and more and more communication on the music channel. 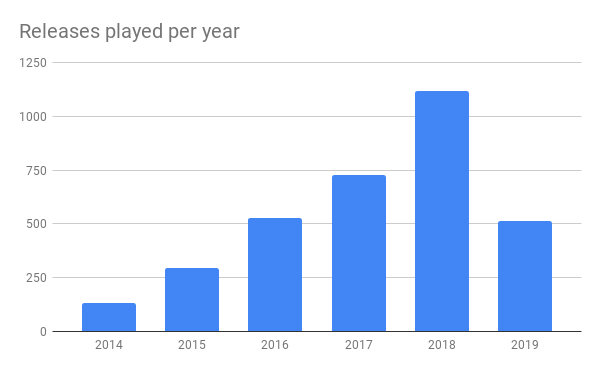 Broken down by month, we play noticeably more music in the months of October and November. I can’t think of why this is, happy to hear your theories about it! 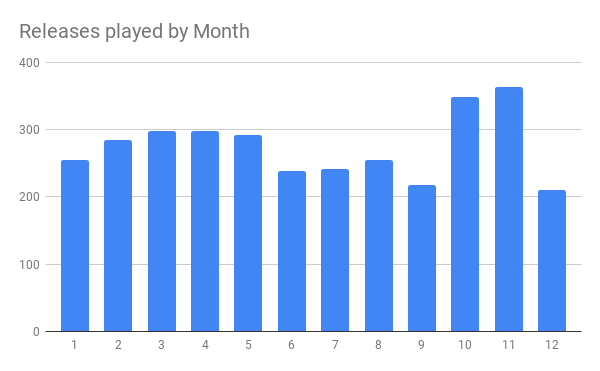 Again you can find the full list of most used emoji reactions in the data spreadsheet. I hope you enjoyed these findings and that you know more about the soundtrack to the Discogs office.2