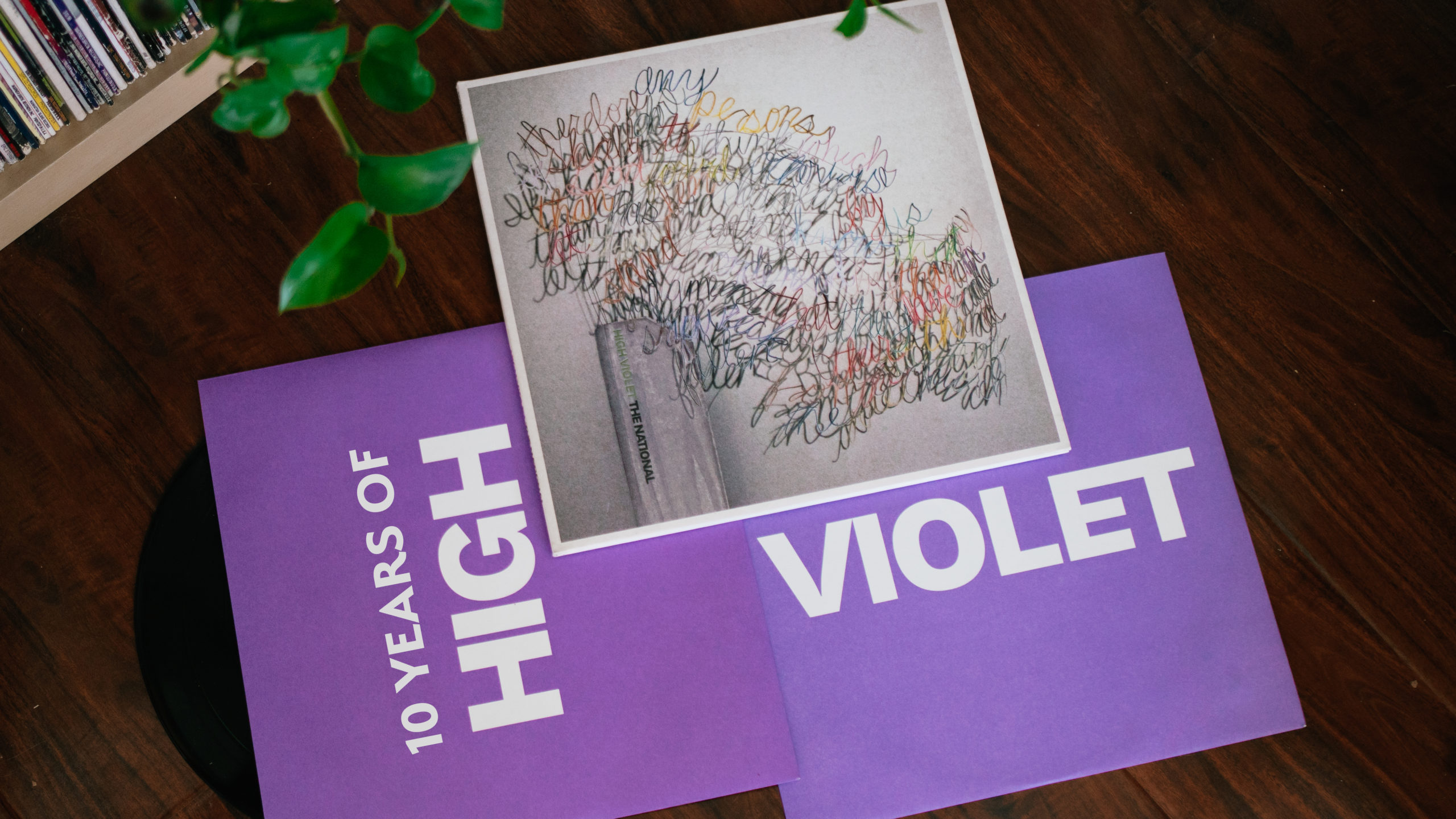 The National felt like they were in a “fishbowl” while making their weighty, ornate breakthrough 2007 album Boxer. Recording on the clock at Tarquin Studios in Bridgeport, Connecticut, was concerningly spendy, forcing the band to make decisions rapidly and decisively. As a result, the music is impactful yet feels wound up like a Rolex timepiece; even vocalist Matt Berninger called it “very intense, but it never quite lets loose.” “We didn’t want to make another elegant, stately, meditative record like Boxer that’s very beautiful and a lot of it’s very… polished,” he told The Quietus in 2010. “After Boxer, I was so traumatized by the process and how stressful it was.” After hitting the road in 2008 with R.E.M. and Modest Mouse, the band wanted to record a much different follow-up — one with less constraint and pressure and much more creative wiggle room.

The National’s ‘High Violet’ At 10

This room to roam led to 2010’s High Violet, their fifth album, and first to be self-produced by the band, which turns 10 today (May 10). Recorded partly at Tarquin and partly in guitarist and keyboardist Aaron Dessner’s garage in Ditmas Park, Brooklyn, the album’s highlights, like “Terrible Love,” “Bloodbuzz Ohio” and “Lemonworld,” felt simultaneously pared-down and cracked open, like the emotional dissonance at the heart of Boxer’s songs was allowed to seep deeper into the sound.

While the band largely slugged out Boxer as a five-piece group, recording at Dessner’s home “didn’t allow us to fully work together 100%,” Devendorf explains. Still, “I think that’s the best part about the [home] studio, just that you have the luxury of trying everything,” Berninger told The Quietus. And if they needed to make a drastic change, “It’s not a disaster. It’s just time,” he said.

“Having that option to work on your own in your own place was a revelation,” bassist Scott Devendorf tells Discogs from his home on Long Island. “It gave us a little more time to develop a little bit more and work more on the sound and the tone versus being in a pay-by-the-hour type of studio situation. Which is obviously stressful when you’re not finishing [in time] what you want to finish.”

Plus, “The sound of the record is literally me being able to preserve my demos and some of them making the record,” Dessner told The Quietus. Accordingly, the cores of both “Terrible Love” and “Little Faith” were their earlier, more skeletal versions — the former a demo, the latter a recording from band rehearsal.

“I recorded [drummer] Bryan [Devendorf]’s part with [only] two microphones,” he continued about “Little Faith.” “That’s why it sounds different from what we’ve done before. It’s more expressive.” According to Dessner, Berninger’s refrain was for the sound to resemble “loose wool or hot tar” — which aptly describes the lightly corrosive feel of both tracks.

Other tracks didn’t exactly arrive fully-formed and necessitated tough decisions. Specifically, “Bloodbuzz Ohio,” which would be the first single from the album, had a horn fanfare that sounded too similar to that of “Fake Empire,” their celebrated single from Boxer. Berninger and Dessner wanted to scrap it; additional producer Peter Katis begged for them to keep it.

Eventually, “It doesn’t sound as good as the fanfare in ‘Fake Empire,’” Berninger concluded. “You just don’t follow [your] most famous song with the same trick but not executed as well. If ‘Fake Empire’ didn’t exist, it would have been great for the song, but it did!”

Berninger also struggled to title the string-filled closer “Vanderlyle Crybaby Geeks” — and to troubleshoot, he reached for Kurt Cobain. “I can’t tell you how long it took me to come up with the word ‘Vanderlyle,’ he told The Quietus. “There’s the Nirvana song ‘Pennyroyal Tea’ — just the word ‘pennyroyal’ I loved. I couldn’t use that. Maybe I should have; that would have saved some time.” (To avoid the word “geeks” sounding like “geese,” Katis had to turn up the “k” sound in equalization.)

Details aside, the band had company they didn’t have on Boxer — High Violet is filled with guests that Devendorf calls “friends of ours who were our neighbors or fellow musicians or whatever.” These included Sufjan Stevens, Bon Iver’s Justin Vernon, the Arcade Fire’s Richard Reed Parry, vocalist Marla Hansen, and violist Nadia Sirota, among a gaggle of others — and a few of them shaped the songs’ foundations.

“Sufjan came in one day when we were struggling with ‘Afraid of Everyone,’” Dessner remembered. “That song was very difficult to make happen, and he just started playing the harmonium and singing along with it. He made up this little melody and he layered it four times — that gave the song a whole different dimension.” For his part, Parry contributed to “six or seven songs,” including his seven-part vocal on “Conversation 16,” and Vernon was the “main harmony man” on “Vanderlyle Crybaby Geeks.”

The result of all this work wasn’t the National cheered up, but the National freed up. “I feel very satisfied that we achieved something new for us, which is a casual, kind of scuzzy ugly, fun rock record that is also equally sort of moving,” Berninger said. “We sort of wanted to jump the fence, wanted to swing for the fences a little bit.” As the unashamedly melodramatic “Geeks” fades to silence, it’s clear the National not only swung, but connected.

Devendorf remains enthusiastic about the album, calling it a “staple” of their setlists a decade later. “There’s a build to those songs that people react to and we react to while playing them,” he says. It’s also one of his favorite-looking National records; the cover is of The Binding Force, a 2008 sculpture by Mark Fox constructed with colored pencil on paper, linen tape, wire, and plywood — a tangle of words, he says, that relate to the album’s lyrical themes: “The artwork relates a lot to what the record sounds like to me. Having it be this wooly kind of tangle resonated for us.”

“And then after we did that,” Devendorf explains of High Violet, “we wanted to do something else.”

For the album’s follow-up Trouble Will Find Me, the National pivoted once more, opting to record in the communal environment of Clubhouse Recording Studios in the Hudson Valley as a break from the “come in and try some things and put them together later” vibe in Dessner’s garage.

That says, High Violet should be a course study for any indie band struggling to follow up a masterpiece in a worthy fashion. Pitchfork described it as “the sound of a band taking a mandate to be a meaningful rock band seriously,” Sputnikmusic argued it “should give faith to anyone who has been disillusioned with indie music,” and Paste declared “its peaks absolutely rival Boxer’s best tracks.”

“It was difficult to make,” Devendorf says at the close of our interview. “Well, all our records are a little bit difficult to make.” The National may be a legendarily high-strung band, seemingly requiring a pound of flesh to make each record, but on High Violet, internal pressures paid off in spades.

In Partnership With 4AD

Interested in seeing more articles like this one?
How about getting information about the Discogs Limited-Edition Radar?
Subscribe to Discogs Partner Offers for access to exclusive and limited edition vinyl, new/reissue releases, contests & more.
Want to join the Discogs community of music lovers?
Sign up for an account here.
Return to Discogs Blog
Tags: the national