When Jonatha and Marco, the organisers of VENYL Fiera del Disco Venezia, asked us if we were interested in meeting a friend with an amazing record collection, of course we jumped at the chance! So on the beautiful sunny Friday before the fair, Jonatha drives us to the countryside outside Venice. We don’t know what to expect, because the guys have been a bit vague about our destination, but what we see when their friend Giovanni invites us into his record room blows our minds.

The room is spacious and cool, climatised to keep the records in the best condition. Being a carpenter, Giovanni has made some of the beautiful record cabinets that line the walls of the room himself. The other ones are the type most of us have at home, from that well known Swedish furniture company. All of the cabinets are filled with records, thousands of records. And these 15,000 records are only half of Giovanni’s collection, the other half are kept at a different location. Most striking about this massive collection is that these are all first pressings. We’re dealing with a very dedicated collector here! 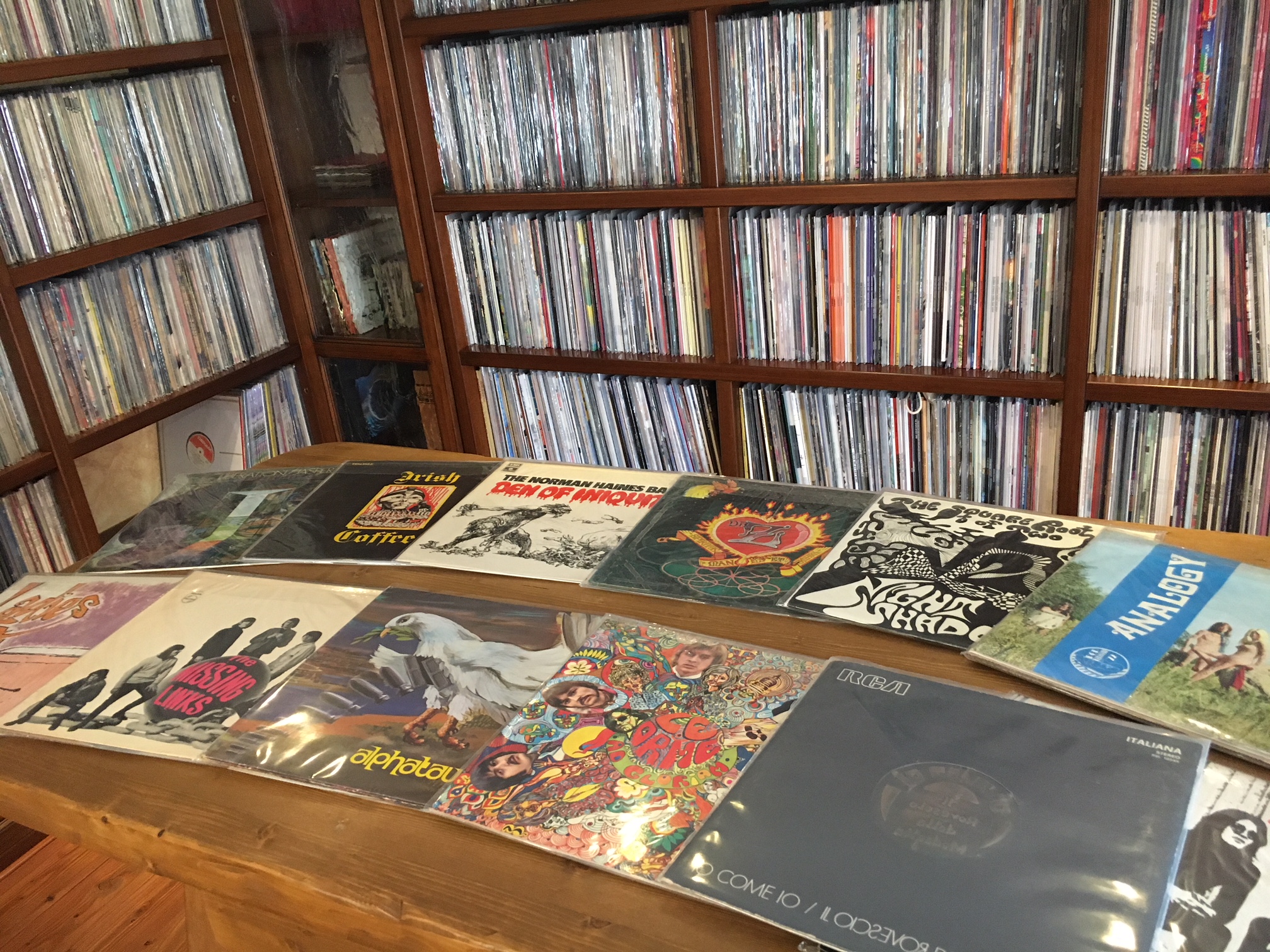 Our host pours us all a glass of wine and we sit down at the table while he shows us some of his rare gems like “Irish Coffee“, “Alphataurus“, Il Rovescio Della Medaglia’s “Io Come Io” (with medal), and The Missing Links’ debut album. His collection mostly contains Prog Rock, but we find Grunge, Rock and Pop on the shelves as well.

“How long have you been collecting?” we ask. Giovanni explains that he is 51 and has been collecting for over 35 years. Having worked internationally as a carpenter, he used his weekly day off to search for records at the location he was stationed at. And because that was in Japan, Australia and all over Europe as well as in the US, he has found pressings from all over the globe. He would ship them home and often times he would have arrived home before the records did. “I stopped travelling when my daughter was born in 2001 because I didn’t want to miss out on her, and started my own carpenter business here. I have had the business until 2014 when the economic downturn started.” 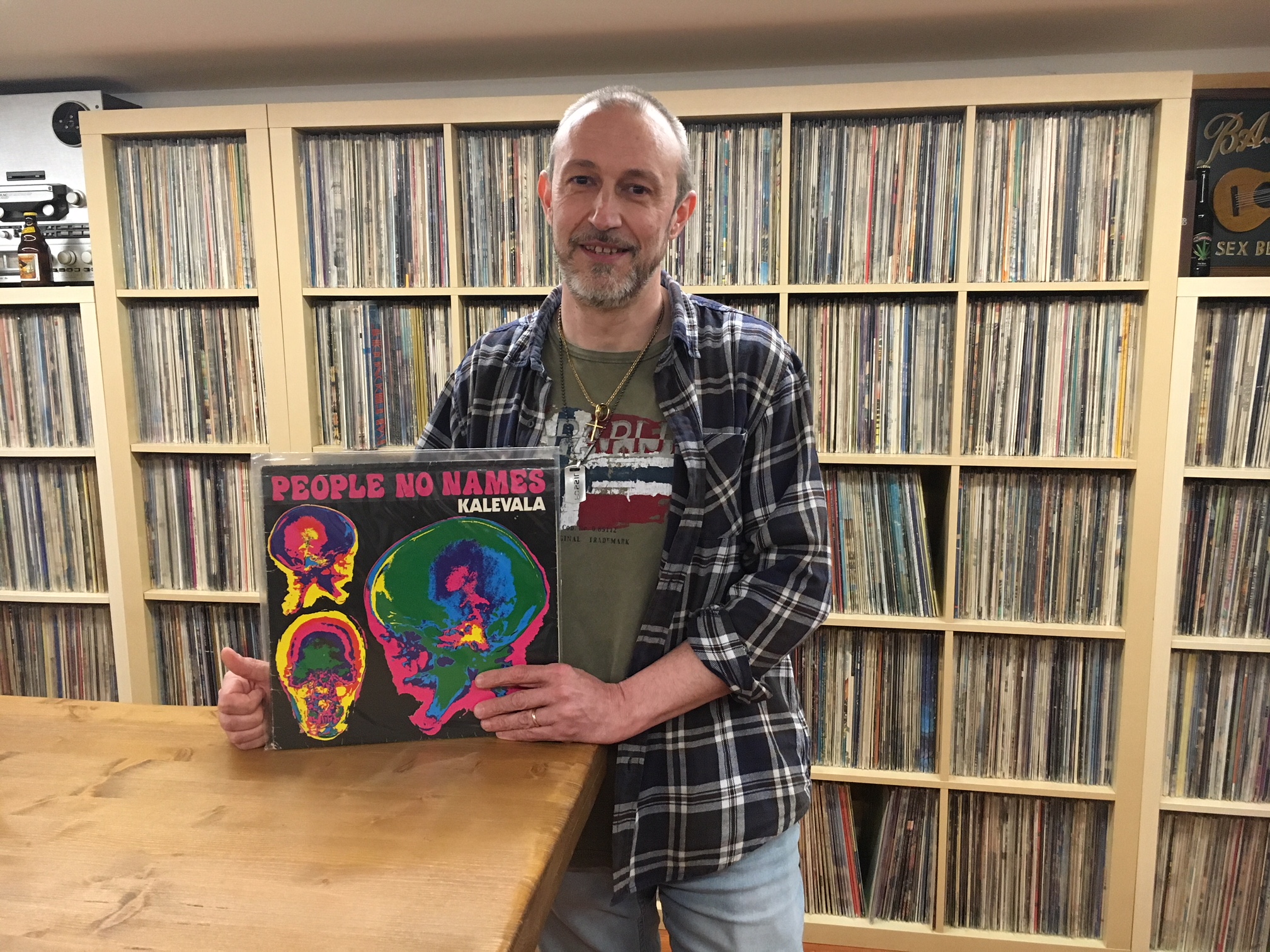 Giovanni with his all time favorite record, “People No Names” by Finnish band Kalevala

“Before there was internet, I used Goldmine Magazine to find records I wanted. But here in Italy, that magazine would arrive two weeks after the publishing date. Then if I wrote a letter to an advertiser in the magazine, that would take another two weeks, and many of the items were gone already. Surface mail was the cheapest mail option so a lot of times I had to wait for two months for items to arrive.” Goldmine wasn’t his only way to find records he was looking for: “In the 80s I contacted band members of my favourite bands, and just asked them if they had any first pressings left. I got many records that way!” 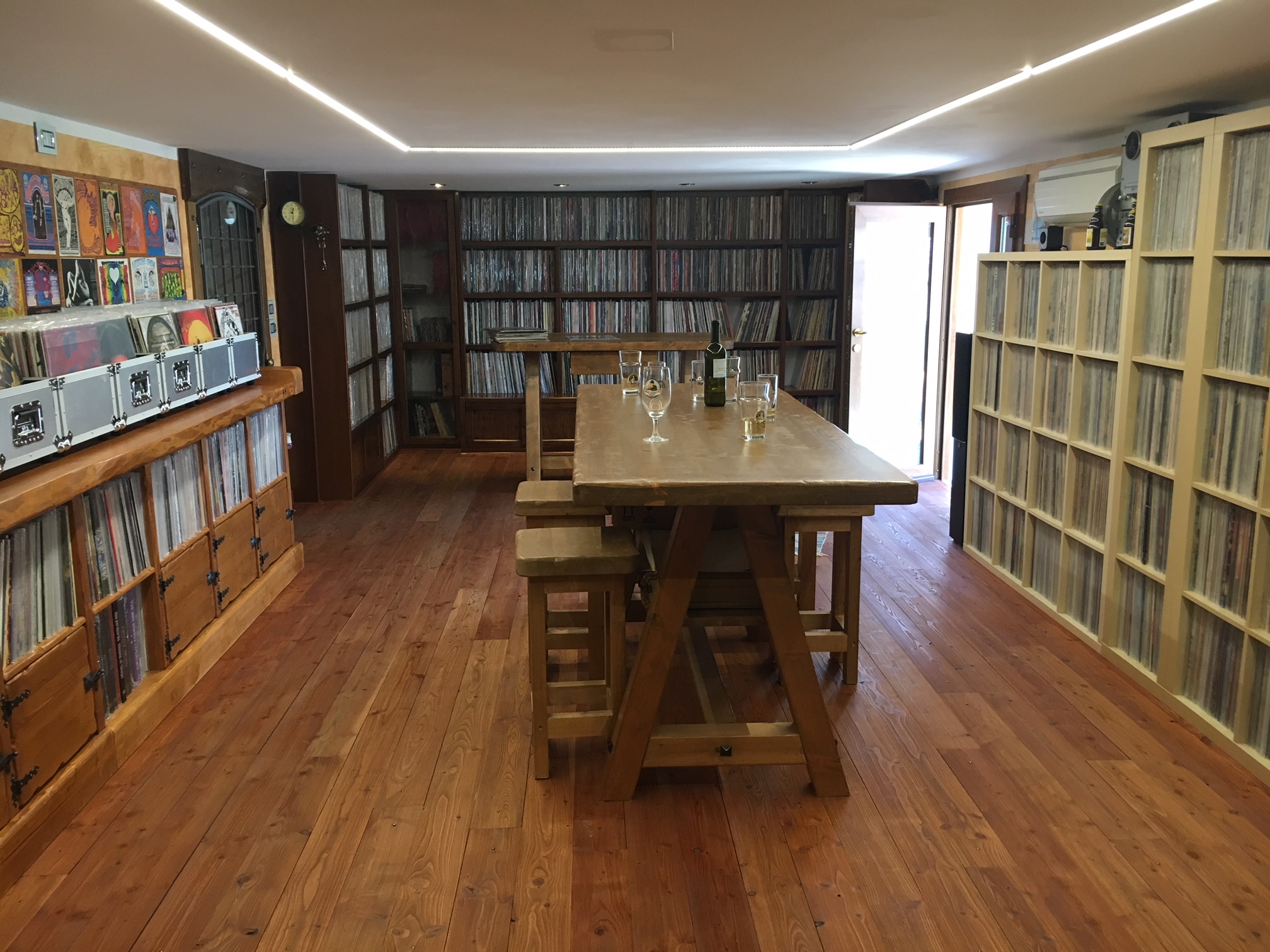 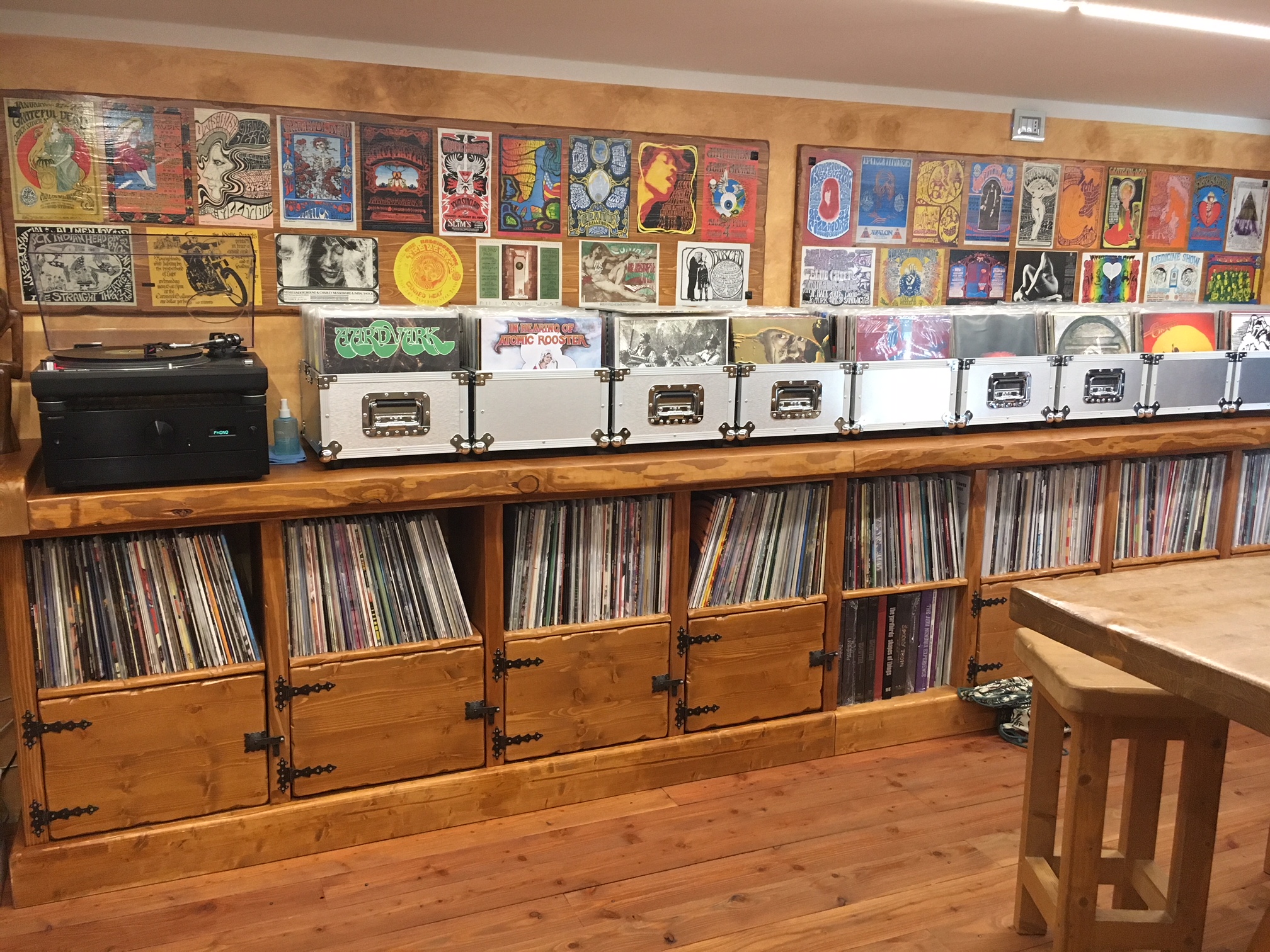 Giovanni spends a few hours a day in his music room, where he has sorted his collection per decade, and then alphabetic. What drives him is his love for, and interest in, music. “There are so many great bands that nobody knows about. Everybody knows Kraftwerk and Faust but there were hundreds of great bands like that. There are so many ways to discover them but there seems to be a lack of interest. People don’t seem to want to find out how the music they listen to is influenced.” What will the future of record collecting look like? “I think the future of collectables is in more mainstream music. There are not a lot of people collecting those and I think they will become collectable in the future”.

It’s time for lunch and the six of us head to place nearby to enjoy a wonderful Italian meal. Afterwards we return to Giovanni’s house for a last peek at his collection. As a souvenir he gives us two records he has worked on, by Italian artist Straw-Lee-No (a phonetic play on the artist’s real name Lino Straulino, like he did with his own name, hence the title of this blog – took us a while to figure that out ;) 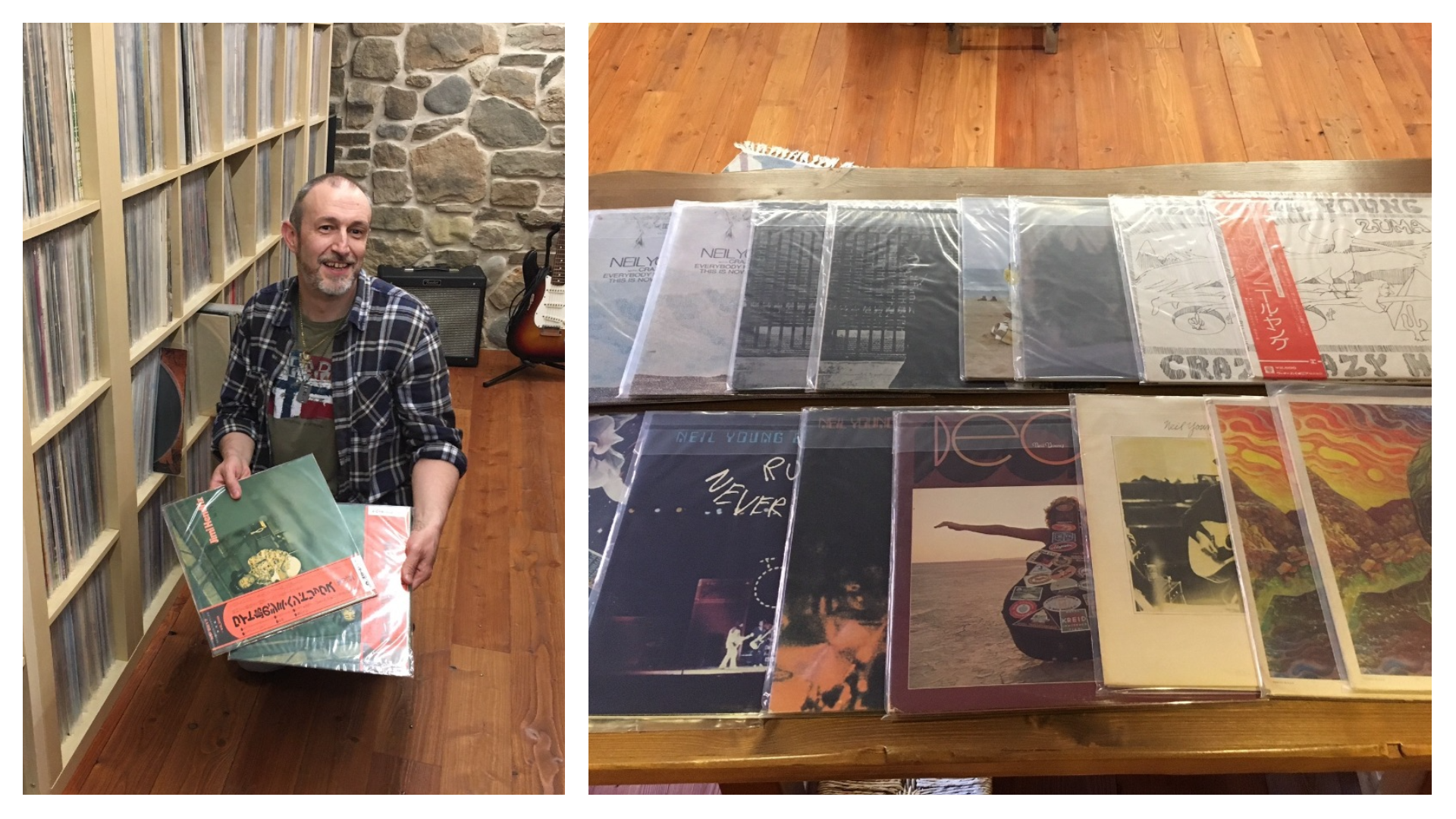 His own collecting has slowed down in the last 10 years. “It’s getting too much, there is no way I can listen to it all, and there is not much I am still looking for.” He finds it difficult to part with his collection, but has a few of them listed for sale on Discogs. And there will always be room for that one holy grail item: the original “Dark Round The Edges” release with the full colour sleeve, which he hasn’t found yet. It isn’t even in the Discogs database at the moment, but we’ll be on the look out for that one for you, Giovanni!

Interested in joining the passionate community of music lovers at Discogs? Sign up for an account to track your Collection, start a Wantlist, and shop for thousands of music releases in the Marketplace!