“You may think I’m small but I have a universe inside my mind.”

I have openly, blissfully, and shamelessly loved Yoko Ono for a while now — but it wasn’t always this way. It took years of personal growth and cultural deprogramming, followed by a yearlong deep dive into her work as part of a tribute that I worked on with the LA Phil, to shift my perspective from “Yoko is a verb that means ‘to break up the party’” to “Yoko is cool” to, finally, “Yoko is a genius and a hero.”

It took me some time to appreciate her special genius because I, like everyone else, grew up singing along to the Beatles. And I, like everyone else, agree that in the short time the Beatles were a band, they added an impossible number of impeccable pop songs to the Western canon. They also changed how recordings were made and influenced popular music for generations.
But along with that, I, like everyone else, imbibed the toxic-fan-culture myth that Yoko merited our hate for being an unapologetic artist. That she somehow deserved absolutely vitriolic scorn for being celebrated and loved by a famous man who was in a band so jealously loved by its fans that one of them shot him to death after asking for his autograph. (And if that’s not toxic fan culture, then I don’t know what is.)

So yes, the Beatles are a big f***ing deal, and I don’t downplay their legacy at all. 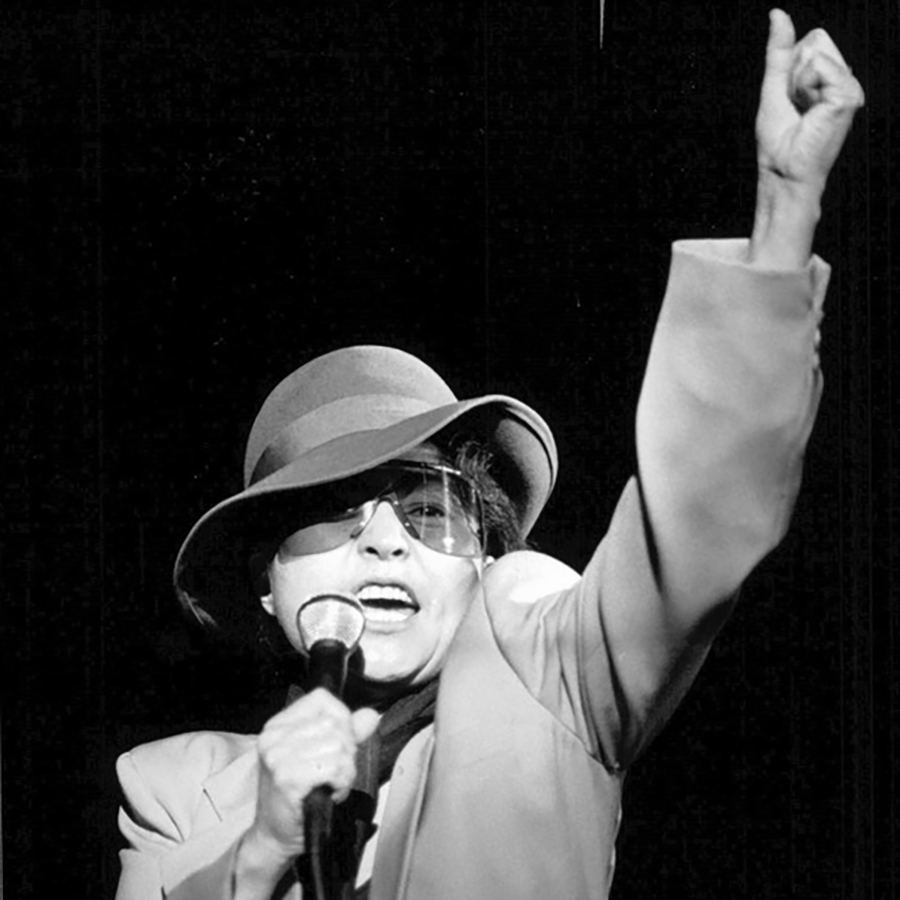 Discover in the Discogs Database

But while the Beatles will always have their place in my heart, it is Yoko whose influence grows in me, unfurling over time like the roots of a tree. It’s Yoko who has continued to make incredible work over the past several decades; who continues to fire off profound Tweets; who experiments and collaborates in ways that are fresh and relevant; and whose ideas, both old and new, still feel revelatory, consciousness-shifting, hopeful, aware, profound.

I’m not alone in my appreciation. The sun continues to rise on Yoko. Now that she’s in her sunset years, she is being recognized by institutions and by culture at large, as she should be.
I had a life-changing experience co-producing one of these institutional homages, called BREATHEWATCHLISTENTOUCH, with the LA Phil and my cultural organization, Gxrlschool, in 2019. It was the first time a major orchestra had ever celebrated Yoko with a concert-length tribute, and we brought 75 women together on stage to perform 90 minutes of her works as part of the LA Phil’s Fluxus Festival.

For this project, we got to inhabit her catalog of pop songs and instruction pieces and performance pieces for a year. We experienced her works conceptually in the planning phases with the LA Phil as potential performance pieces, then again filtered through the minds of our guest performers like musician St. Vincent, poet Kamil Oshundara, choreographer Nina McNeely, artist Sudan Archives, visual designer Kerstin Hovland — and then again in the room, live, with the audience at Walt Disney Concert Hall during the show. And with Yoko, who was there. Every level of experience was new, and richer, and different, like a door opening to a door to another door. 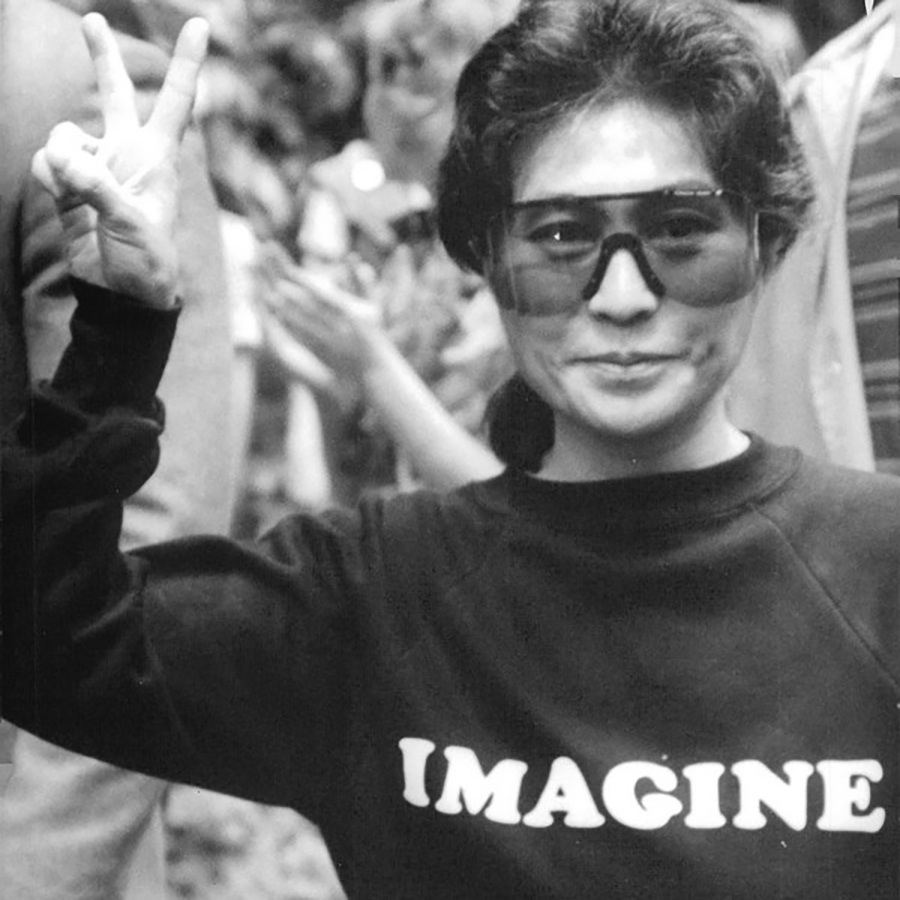 Discover in the Discogs Database

To be fair, Yoko has had plenty of star-studded tributes in her honor before — but never quite like this, an organic outpouring of love by 75 women with the blessing of a major orchestra. And because her work is so generous and open-ended, it allowed us to invite voices that you don’t normally see to the center of that storied stage and say: Listen. This is art.

For the ultimate blessing, Yoko watched the show with us, from the audience. During the finale, I peeked through the stage door to see 2,200 people embracing, many weeping openly as we sang “Imagine” together, with her, as our song. The song she co-wrote with John Lennon.

But one of the greatest moments of catharsis was watching Shirley Manson stand center stage and speak for all of us when she thanked Yoko for paving the way for us to be. Shirley spoke our truth: While we may have misunderstood Yoko in our youth, we know better now. We see her, and we thank her for holding the line for all women, in the most inclusive and broad interpretation of that word, before we understood what she was doing. We thank her for teaching us that we don’t need permission to be our unapologetic selves, whatever that looks like. We are better — and freer — because of her. 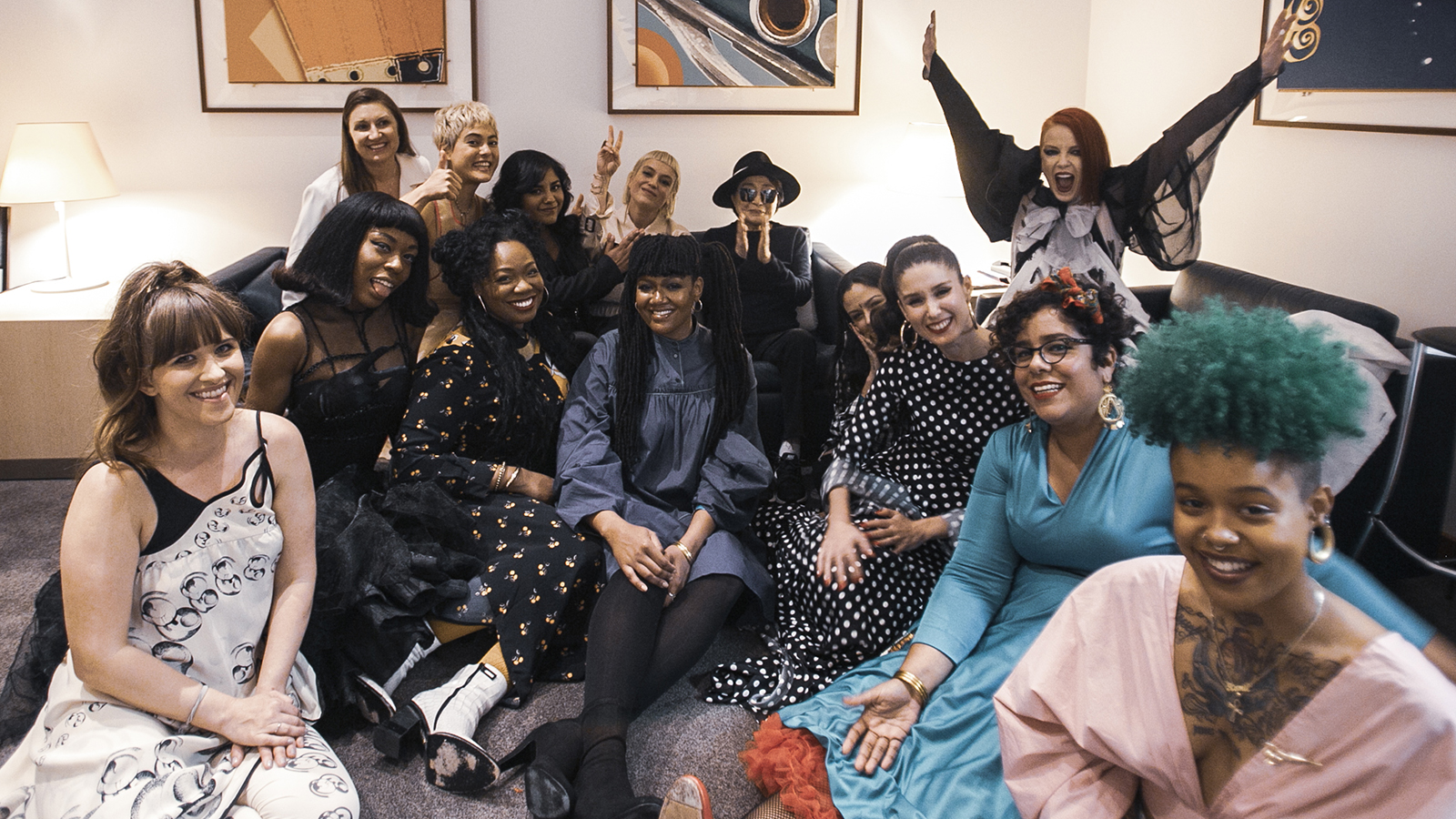 When we took this photo together in the dressing room, I was struck by how small she was in her chic black athleisure. This petite person changed the world with one giant imagination. And with her actions: in the face of life-threatening notoriety, she was brave. She showed us that the toughest thing you can do is to keep being kind; to keep opening the door to hope and peace; to keep taking creative risks; to keep being a wonderful mother; to keep inviting others into your work; to keep going. Eventually, the world will lose the misogyny and catch on.

Experiencing Yoko’s work feels like being seen, really seen, by someone who loves you. In her eyes, we are invited to shine as our best, brightest, most creative selves. She never dictates, but asks. Why not peace? What could be possible? Can you imagine? We get to sit at the table and dream and wonder with her.

Yoko didn’t break up the Beatles. Life broke up the Beatles. And in diametric opposition to what her name was twisted to mean, Yoko’s work is actually one big invitation to the best party you can imagine.

So yes, the sun continues to rise on Yoko Ono’s legacy while it slowly sets on sexism and xenophobia and dusty narratives about ambitious women.

From my heart, and on behalf of women, to Yoko — nobody sees us like you do.

Anna Bulbrook
Anna is an interdisciplinary cultural producer, curator, creative strategist, and director. She leads Gxrlschool, a community agency using creative experiences to welcome broad audiences into meaningful ideas. The former violinist in the Airborne Toxic Event, Edward Sharpe + The Magnetic Zeros, Anna also has an RIAA-Certified Gold Record from her past life as a touring and recording artist. Credits include Sia, Beyoncé, Vampire Weekend, Kanye West, and more.
Website
×