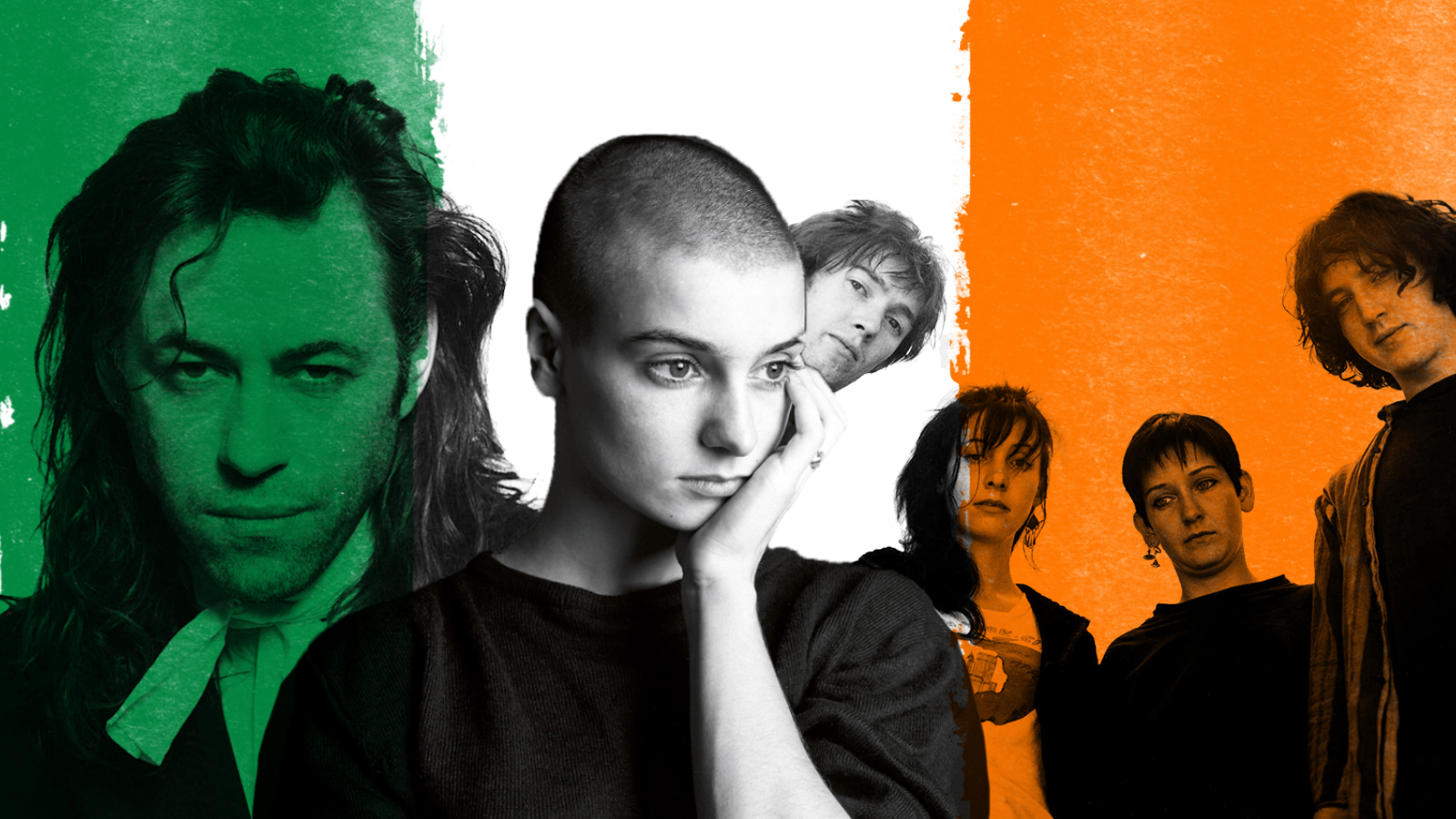 1990 was one of the most transitional years for rock ‘n’ roll as it was segueing from the poptimistic decadence of the 1980s into the self-aware earnestness and energy emerging from the rising grunge, pop-punk and skate metal movements that would come to define much of the Bill Clinton years.

But between such extremes, there was a robust alternative market known as “college rock,” which too was amid its growing pains in 1990 as young, hip A&R men from the major labels began showing up at underground clubs. And not just in North America, but all over the United Kingdom in the wake of the Britpop explosion, namely the Emerald Isle of Ireland, in terms of the number of acts flooding the commercial/college crossover market at the time. The most notable, of course, being Sinead O’Connor, whose breakthrough sophomore LP I Do Not Want What I Haven’t Got —spearheaded by a massive radio hit in her version of Prince’s “Nothing Compares 2 U”— radiated across the airwaves with such force it compelled us to seek out other acts of the great Irish Invasion of 1990.

What we got here are ten albums from this pivotal moment in time for Irish Rock, all of which undoubtedly helped clear the path for their exalted big brothers in U2 to transition into the Achtung Baby era with mucho panache. It might be most renowned for its massive ballads, but the primary pulse that keeps Sinead’s sophomore breakthrough still such an enduring and transformative work 30 years after its original release on March 20, 1990, all rest in the rhythms of IDNWWIHG.

Material such as a Funky Drummer-blessed update of the old Celtic hymn “I Am Stretched On Your Grave” expounded upon the grooves bubbling across the water in London and Bristol across the Broken ground established by Neneh Cherry and Soul II Soul. Meanwhile, tracks like “The Emperor’s New Clothes” and “Jump In The River” are punctuated by punkish energy that helped set the table for everyone from PJ Harvey to Alanis Morrissette heading into the 90s. Thanks, of course, to the production work of Nellee Hooper and the massive studio band she had constructing the songs, including the likes of Smiths bassist Andy Rourke, Adam Ant guitarist Marco Pirroni and the “Sunday Bloody Sunday” fiddle player Steve Wickham in its ranks. Beyond “Nothing Compares 2 U”, I Do Not Want What I Haven’t Got is a masterpiece for everything else it entails as well. Released on Atlantic in 1990, you can hear subtle strains of the treated guitar interfaces The Edge would be toying with in the Achtung Baby era across David Frew’s distinctive techniques on the six-string, especially in the darker moments of the group’s grossly underrated eponymous debut. In fact, U2 would invite An Emotional Fish to open for their shows in Italy and France alongside Pearl Jam on the 1993 leg of the Zoo TV Tour. Elsewhere, Edna Wyatt’s bass playing across songs like “Celebrate” and “That Demon Jive” will appeal to fans of Peter Hook and Mike Watt alike. However, the mystique of Fish exists largely in the songcraft of founding member and lead singer Gerard Whalen, a clear understudy of Bryan Ferry and Nick Cave in the seamless way by which he can glide from the shimmering pop of “Julian” into the INXS overdrive of “Change” without breaking a sweat. Before The Frames came into view during the 90s, Hothouse Flowers was the original streets-to-stardom story in Irish Rock.

The band was only together busking around Dublin when they were discovered by Bono, who released their first single “Love Don’t Work This Way” on U2’s Mother Records before signing to London Records and releasing People in 1988, the most successful debut in Irish music history. For 1990’s Home, the Flowers pay homage to Van the Man, channeling such Morrison masterpieces as St. Dominic’s Preview and Tupelo Honey in the way by which they inject generous elements American gospel and Celtic folk into their earnest guitar pop across these 14 songs, highlighted by a lively rendition of the Johnny Nash classic “I Can See Clearly Now.” In her review of the album for Entertainment Weekly, music critic Gina Arnold said of 1990’s Enlightenment: “Contrary to the New Age connotations of the title, the subject of Van Morrison’s latest album, Enlightenment — his 20th solo effort — is a heart-stirring look back at the advent of rock & roll.

On Enlightenment, Morrison picks the lock of memory with a stream-of-consciousness singing style, with his soulful voice, and with any other musical mnemonic button, he can find to push. Every song is about his initiation into the mysteries of rock.” Looking back now, when you view Enlightenment as part of this trilogy alongside 1989’s Avalon Sunset and 1991’s Hymns to the Silence, it stands as part of a creatively fertile period in his illustrious career. However it was released adjacent to The Best of Van Morrison —a CD that pretty much every 90s kid had in their collection at college— and unfortunately Enlightenment never did as well as such future Van albums as Too Long In Exile and Days Like This did later in the decade, peaking at no. 62 on the Billboard Hot 100 that year. But looking back at Morrison’s full discography, it’s absolutely one to revisit when venturing into this period of his career, no doubt. Released on November 6, 1990, Hell’s Ditch was the last Pogues album to feature the great Shane MacGowan on the mic. Joe Strummer also produced it and, through the pair’s mutual love for Spain and its culture, crafted an album unlike any other the Irish punk icons had ever manifested before or since, for that matter.

If you are a fan of Strummer’s soundtracks to such films as Walker and Straight To Hell, it’s time to introduce yourself to this frustratingly overlooked gem properly. Also worth seeking out, though it’s OOP and going for top dollar, is the limited edition Live In London, a complete performance of Strummer fronting The Pogues in the wake of Shane’s departure.

A House ☘️ I Want Too Much A House’s second album I Want Too Much – released on the influential English imprint Blanco Y Negro Records in March of 1990 — remains the quintessence of their distinctive sound, catchy, anthemic Irish rock with a full foot submerged in the experimental abandon of Virgin Prunes.

If you ever wanted to hear the band who laid the groundwork for Radiohead‘s adventures in loud-soft-loud dynamism, it’s Dublin’s vastly underrated A House. And with this album still very much available on the used market, It’s well worth the small pittance to rediscover on CD or vinyl. Of course, that’s not to say a full bore reissue campaign of the entire A House catalog would not be welcome with open arms by its loyal cult following all the same. Glider, released in April 1990 as a buffer between My Bloody Valentine’s 1988 debut Isn’t Anything and its precedent-setting shoegaze masterpiece Loveless, was something of a calm before the storm in how it revealed the existence of an incredibly gifted modern Irish pop band hidden beneath the waves of amplifier roar.

If traditional Irish music is colored by the lush imagery of the cliffs on the Celtic seaside, My Bloody Valentine is the sound of all that dirt, grass, and stone crashing into the sea in a tsunami of guitar fuzz. Of course, the release of Loveless a year later fully eclipsed the profile of this deep treasure in the MBV catalog. But even still, Glider is quite an incredible curiosity that illustrates Kevin Shields‘s glide guitar technique as a harbinger of dreamy melodies as much as hypnotic chaos.

The solo output of The Boomtown Rats frontman never got the appreciation it deserved. But as he is about to unveil the first proper album with his legendary Irish new wave band in 36 years, entitled Citizens of Boomtown, later this March, it would be wise to familiarize yourself with his sparse yet understated cache of solo LPs. The best one to start with is The Vegetarians of Love, released 30 years ago this coming July on Mercury in Europe and Atlantic in the United States. Produced by Rupert Hine, who Rush fans will recognize for his work on Presto and Roll The Bones around the same time, Vegetarians is the closest thing to a classic Rats album in Geldof’s self-crafted canon, featuring David A. Stewart of Eurythmics on guitar, Paul Carrack of Mike & The Mechanics on keys and old Boomtown bandmate Peter Briquette on bass.

Alongside Stiff Little Fingers and The Outcasts, Derry’s The Undertones provided the urgent soundtrack to Northern Ireland’s The Troubles for a nation of youth in revolt. Following the band’s dissolution in 1983, members John O’Neill and Damien O’Neill took a cue from the likes of Mick Jones and John Lydon and formed That Petrol Emotion. Living in a country that rests between New York City and Manchester, England, certainly harbored a profound impact on the TPE sound. Especially so on Chemicrazy, which may have been produced by Scott Litt but sounds more like it could’ve very well been helmed by someone like Arthur Baker or Booga Bear all the same.

No doubt, U2 was taking notes on this crucial 4th TPE LP as well before heading off to Berlin to begin work on Achtung Baby.

As the guitarist for Thin Lizzy in its imperial era, the late Gary Moore — along with fellow six-string countryman Rory Gallagher — defined the art of hard rock blues for the Irish. 1990’s Still Got The Blues is the most definite statement of Gary Moore’s dominance in an otherwise solid solo catalog that includes such loud rock classics as Victims Of The Future and After The War.

But Still Got The Blues showcased the full spectrum of Moore’s talents as a stylist, be it cutting heads with Albert King on the AC Davis tune “Oh, Pretty Woman” and seamlessly sliding into the driver’s seat of “That Kind Of Woman,” a mid-tempo Claptonesque rocker penned by George Harrison initially intended for a scrapped follow-up to Cloud Nine. But even moreover, Still Got The Blues also features some of Moore’s strongest original material in his oeuvre, anchored by the slow-burning title cut, the only tune in Moore’s solo catalog that charted on the Billboard Hot 100, landing at no. 92 on February 16, 1991.