Discogs is, first and foremost, a Database. We’re trying to build an archive of all the music in the world, especially the physically recorded stuff. Somewhere along the way, in the mid 2000s, there had been so many feature requests for a Marketplace that Discogs decided to build one. As far as satisfying our userbase goes, this was a great move because it allowed us to disable ads for logged in users, and allowed people a means of selling the things they loved and buying the things longed to love instead of just dreaming.

This was also a great move in terms of building a bigger Database: all of a sudden there was another tangible reason for people to contribute to the Discogs project – if you submit a Release, you can sell it. This also provided a means for many Contributors to easily recoup costs spent on Releases bought for the purpose of Contributing. There are a surprising number of people doing this.

In the name of helping strengthen this two-way relationship I decided to run a handful of analyses to identify which kinds of Database contributions increase sales the most, as a means of helping Sellers Contribute to the Database in the most sustainable way for them.

The following results are based on aggregate data from Jan-Jun, 2018.

#1 Submit More Releases To The Database

Obviously, because you can’t sell Releases unless they’re listed in the Database…

If you have a lot of Releases you could submit to the Database, but you’re not sure where to start, follow this golden rule: Buyers on Discogs tend to stick with what they know, so check your sales history and identify the highest selling Artists, Labels, Styles and Genres (in that order), and focus on submitting Releases from those categories first.

#2 Add YouTube Clips To All Releases In Your Inventory

Ever wondered why stock sits there for years without moving? Perhaps it’s because no one looking at the Release page has ever heard the music before… help your buyers sample before they buy and they will be much, MUCH more likely to commit to a purchase. 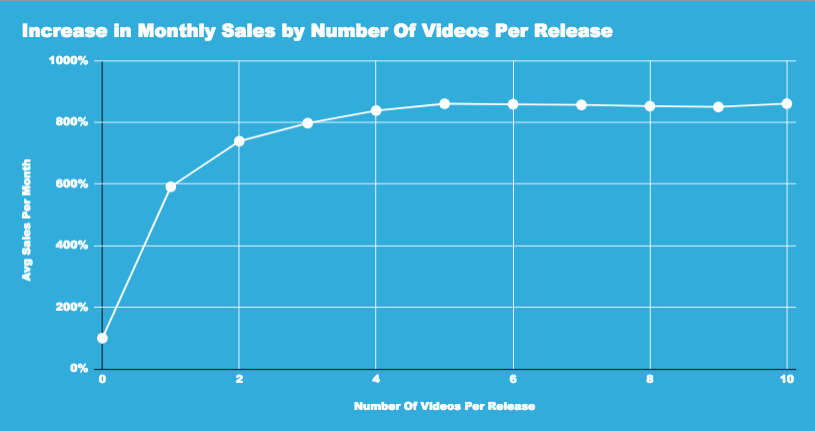 This graph shows that the number of Sales per month per Release increases a whopping 600% from when it has no YouTube videos to when it has one.

Is this correlation or causation? This analysis looks only at Releases that have had a YouTube video at some point, so it shows the difference in monthly sales between months where there were and were not any YouTube videos.

Next time you’re adding to your Discogs inventory, check if the Release page has videos, and if they’re missing add them in. It’s very easy to do, read the ‘How To Add YouTube Videos To Release Page‘ quick guide to learn how.

If you would like a list of all Releases in your existing inventory, with the number of YouTube clips attached to each one, so you can identify which ones to focus on, send a private message to Moon_Ray, and he will reply via email with a CSV.

#3 Add Images To All Releases In Your Inventory

Following the same trend as Videos, here’s what happens to Release sales when you add Images to them. The downward kink in the trend is due to the fact that Releases sell SO much faster after the first images are added that they actually slow down a bit after that. 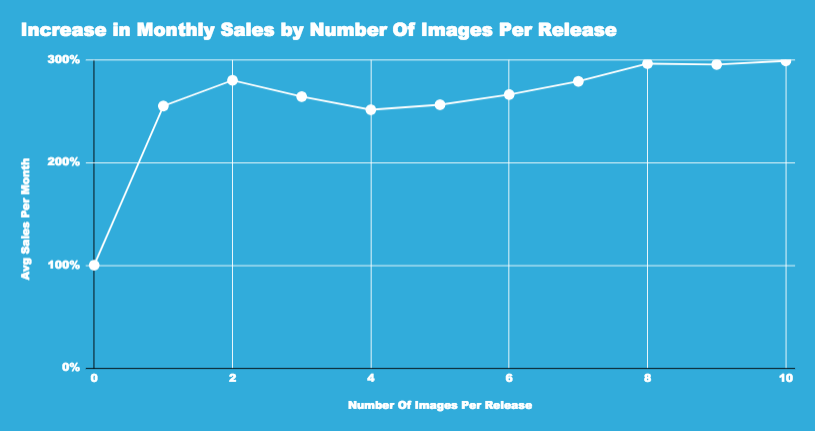 This graph looks only at Releases that have had an image at some point, and shows that the number of Sales per month per Release increases ~260% from when it has no images to when it has one. The dip in the graph at 3-6 images is because Releases sell so much faster once the first images are added that they are typically out of stock when the 3rd to 6th images are added.

If you would like a list of all Releases in your existing inventory, with the number of images attached to each so you can identify which ones to focus on, send a private message to Moon_Ray, and he will reply via email with a CSV.