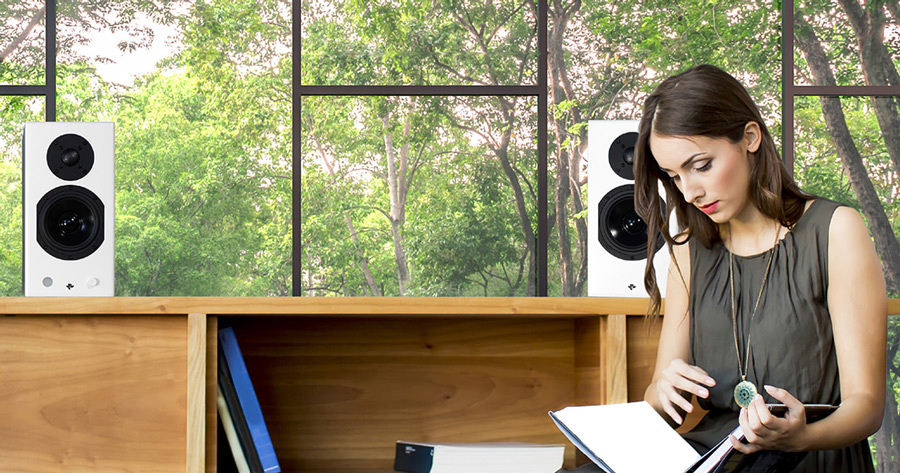 Sometimes I like to amuse myself — and I use that term lightly — by imagining various scenarios in which I find myself stuffed into a small living space, maybe a two-room apartment or tiny house, living like a recluse.

Perhaps the economy has collapsed or everyone has abandoned me for having unpopular opinions, but I’m alone except for my records. There are always records. But with space at a premium, there’s no room for Biggie, which is what I call my primary stereo system with its giant speakers, piles of tubes, amps, preamps, phono stages, and multiple turntables.

Enter the Totem Acoustic KIN Play powered speakers, miniature marvels from one of Canada’s most revered high-end speaker makers. For $1,000, they come complete with everything you need already built in: an amplifier that puts out 120 watts per channel, phono stage, high-quality DAC and Bluetooth capability. Just add turntable and, at least, a smart phone and you’ve got analog and digital covered.

Powered speakers are nothing new, but their popularity has risen during the vinyl revolution, with many choosing a simple system comprised of powered speakers and an inexpensive turntable with a built-in phono preamplifier.

Totem, a Canadian company with a decades-long history of producing top-rated loudspeakers, has entered the powered market with an ingenuous product that attempts to cover all of the bases while also providing high-end sound. Spoiler alert: They’ve succeeded.

The KINs, which come in at a tidy 14-inches tall by seven-inches wide, sport a five-inch woofer and one-inch metal alloy dome tweeter, and have a claimed frequency response of 39Hz-20kHz ±3dB with proper positioning.

They’re available in satin black or white. The traditional black version is hot like a black cocktail dress but they show every fingerprint possible, which is annoying but also a very first-world problem. The white is initially a bit jarring but, damn, they’re beautiful. They arrive with all the cables you need, assuming that your turntable has its own RCA interconnects.

While the set up is technically simple, Totem’s manual leaves a little to be desired. For example, it incorrectly suggests that turning the active speaker’s volume knob to the right will decrease volume. It’s the other right, of course. Don’t worry, you won’t blow anything up if you accidentally crank the KINs to Sabbath levels; there’s a volume limiter to keep things sane (which is also not mentioned).

The KINs paired easily via Bluetooth with both my iPhone and Kindle, although the iPhone — an ancient 6 — needed to be re-paired a couple of times. I blame the phone. They support Bluetooth 4.1,aptX and aptX HD, with upsampling to near CD quality.

The volume knob on the master speaker can also be used as an input selector switch, but it’s much easier to use the excellent remote, which allows you to easily switch inputs, pair Bluetooth, and even adjust bass and treble — nice one, Totem.

Set up and sound

The majority of my listening was spent with the speakers in what I consider a real-world set up, i.e. not ideal by normal audiophile standards. I figure that even someone able to drop $1,000 on a pair of speakers will likely be in a cramped space and unable to enjoy a throne-like chair stationed in the sweet spot. As it turns out, the Totems laugh at sweet spots.

Connections are rudimentary. The supplied speaker cables have banana plugs, the power cord goes where it goes, and the optical input is self-explanatory, as are the standard RCA jacks. Don’t worry too much about the switch choosing between line and phono; if your turntable has a built-in phono stage, then you need to disable it because there’s no way it’s better than the KINs, so set the switch to phono and enjoy. But if you do have a nice outboard phono stage, switch the speakers to line.

The speakers are at their best with a little room to breathe, so try and leave around a foot between them and the wall behind them, although you can boost the bass a bit by scooting closer to the wall. They also get better with some distance between them but, again, the Totems laugh at sweet spots.

So what do I mean by that? The speakers do a remarkable job of throwing a believable and highly entertaining soundstage no matter how they’re placed or where you’re sitting in the room. This is a godsend for those stuck in apartments. I placed the KINs on a Kallax, as many people might do, with either four feet or two feet between them, and in rooms both large and small.

The overall sound signature leans toward honesty and accuracy yet without any hardness or hyper-detail — the speakers don’t impose themselves on listeners. When I spun my go-to test record — a 1980s OJC pressing of Waltz For Debby, by the Bill Evans Trio — I got the same sensation of time travel to the original event as I do with Biggie. Was it as good? Of course not; any given component in Biggie costs more than the Totems. But was the music’s essence captured and the recording honored? Yep.

And that was using the Totem’s built-in phono stage, which I greatly enjoyed. It’s clearly better and far preferable to the bog-standard phono stages crammed into most entry-level turntables (although the upgraded phono stage in the Audio Technica LP-120X is much better than the original, it couldn’t match the KIN Play’s delicacy or timbral accuracy).

I love records but am by no means an analog Luddite. Spotify has been a very good buddy to me and I love him, especially when cooking, cleaning or napping. The KINs sounded wonderful when streaming, with a lot of punch and presence; I never felt the need to switch to records and, in some ways, preferred streaming to LPs.

I briefly compared the Totems to the Edifier R1280DB, which is admittedly a far cheaper option at $129. But the Edifier doesn’t have a phono stage, has far less power, and its digital-to-analog converter isn’t as sophisticated. Somewhere in the middle of all that, I justified the comparison.

The biggest plus for the Edifier is an inherent friendliness. The sound signature is very forgiving but almost unrelentingly so, and everything tended to sound both pleasant and exactly the same. That’s not good. They’re perhaps a better option for someone with a really bad turntable, like the Audio-Technica LP60, but the Totems will let you know exactly what’s happening on a recording without beating you over the head.

A $1,000 price point may be a difficult number for a lot of people new to collecting, but when you factor in everything you’re getting, the Totem Acoustic KIN Play speakers start looking like a bargain.

You get Totem-level speakers as far as parts and construction, which is saying a lot. I wouldn’t be surprised if the phono stage, if sold as a stand-alone component, cost at least $400. Same for the DAC. There’s a lot going on here, especially when you factor in that you could easily score a nice vintage turntable on Craigslist for $50-$100 and be good to go.

This article was produced in partnership with Totem Acoustic.