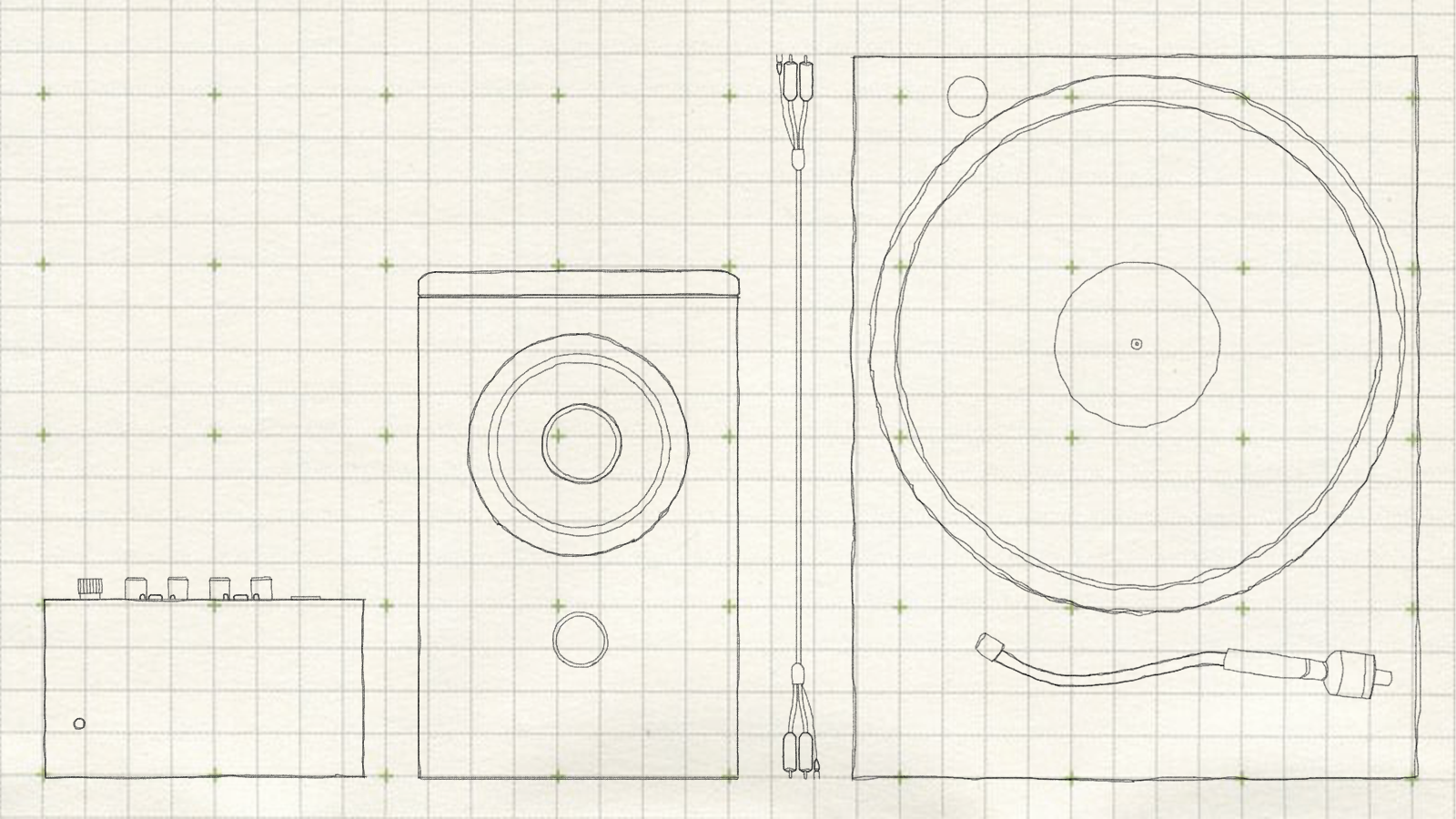 Several times a month, a familiar question pops up on a Discogs forum:

“So, I finally bought a turntable and I have this killer home theater receiver but when I plug the turntable into the back I can barely hear anything. Is my brand new turntable broken?!?!?”

“Hey, I got my dad’s old speakers and bought a turntable and I can’t figure out how to connect them?”

We’ve all been there. The ins-and-outs of a hi-fi system may now be as familiar to you as “Who’s Next,” but they were once a mystery. Plus, the gear landscape has changed. Back in the day, there were only a couple of options, and now there are many.

So, we thought it was time to offer up Discogs’ basic guide to a simple system. Here we’ll lay out the components needed to listen to records and how to connect them.

A phono preamp is essentially an equalizer that takes the signal from the phono cartridge, equalizes it, and then amplifies it. The RIAA (Recording Industry Association of America) equalization filter in every phono preamp actually reverses the RIAA equalization used when cutting a record. In order to fit more music onto an LP, engineers discovered that boosting the high frequencies and cutting the low would allow more grooves to be carved into an album side. The RIAA filter in a phono preamp flips everything back to its proper place, and eventually, it comes out of your speakers as Phoebe Bridgers.

A phono stage is crucial, and for decades, they were everywhere. Receivers, integrated amplifiers, and separate preamplifiers — check out the glossary below for definitions of various kinds of stereo equipment — all had a phono stage because records were the dominant medium.

Then CDs came along and ruined music for everyone, leading to a gradual phasing out of phono stages. When vinyl started bouncing back, turntable manufacturers wisely began adding a built-in phono preamp to the turntables themselves.

That means we have options. Following is a painless breakdown of three basic turntable setups that are the most common, with an explanation for what you’ll need to make music.

This is how the vast majority of stereo systems used to look, and many still do. Sure there have always been cheap suitcase models, consoles, and all-in-ones, but it was in no way unusual for a normal teenager from a lower-middle-class family to have a reasonable turntable set-up.

You had your simple, well-built turntable, probably a Pioneer or Technics. Next was a very basic receiver or integrated amplifier putting out around 15 watts per channel and sporting a phono stage and a tape loop, in case you were lucky enough to have a cassette deck. Top it off with a workmanlike pair of speakers that you got on sale at Radio Shack, which came with 20-feet of cheap speaker wire.

And that was it. It’s easy to put together a system like this, and hook-up is a breeze.

You plug the cables coming from your turntable into the phono stage of the amplifier, matching red to red and white to white. There will probably also be a ground wire coming from the turntable, which you connect to a screw marked “Ground” on your amp.

You then connect your speakers to the amplifiers making sure that you don’t invert phase. That’s also easy; if you’re using generic wire, one side of the plastic insulation will have writing on it and one will be blank. 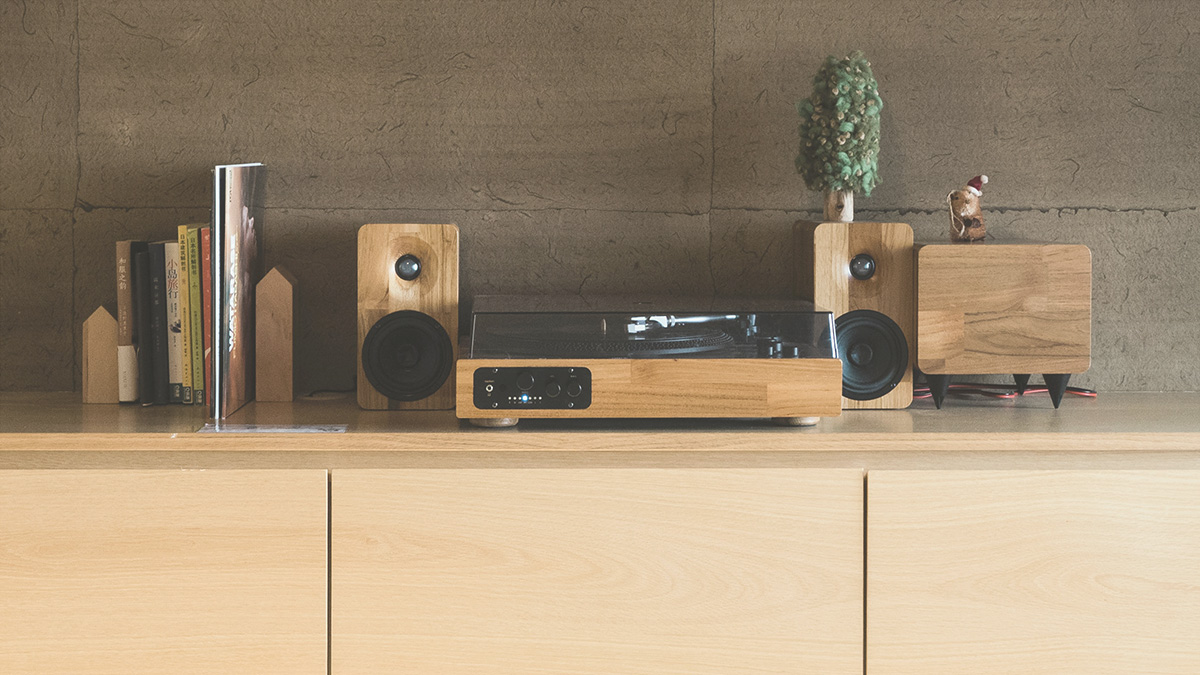 Let’s say you’ve bought one of the many modern turntables that have a built-in phono preamp. Here’s what that means: If you already own an audio/video receiver that you use for movies or gaming, but it does not have an input marked “Phono,” you can plug your turntable into any spare input. The ones marked “Aux,” short for auxiliary, would be your first and best choice.

If you already own one of these turntables, look for a switch on the back. It will say “Line/Phono.” If your receiver does not have a phono input, make sure the switch is set to “Line.” An auxiliary input on a receiver is a line input. All that means is that it performs no function other than to pass along a signal.

If your receiver does have a phono input, then set the turntable’s switch to “Phono.” The advantage of this is that the vast majority of phono stages included with receivers — or integrated amps or preamplifiers — will almost certainly be significantly better than the one in your turntable.

Here’s what happens when you screw it up:

If your turntable is switched to “Phono” and you plug it into an auxiliary input the music will be extremely faint. Remember: An auxiliary input performs no equalization or amplification, so the only thing happening in this scenario is that it’s passing along a barely audible signal from your cartridge.

And if you switch your turntable to “Line” and then plug it into an actual phono stage, you’re going to get an unholy squeal. That’s because you’re amplifying everything twice, which is a bad thing.

The kind of system I’ve just described would use a passive loudspeaker. This means a speaker that needs an amplifier of some kind in order to make music, just as described in the basic turntable set-up. However, powered speakers have become increasingly common as people use them for computers, gaming, or just because they’re a solid budget-friendly choice.

If you have a pair of powered speakers, then you don’t need anything but the speakers and a turntable with a built-in phono preamp. The speakers will have their own amplifier with a volume control, and will also come with wire to connect the two speakers.

Simply connect the turntable to the speakers. There will be common RCA jacks on the back of one speaker, red and white to match your turntable’s wires, along with a place to attach your ground wire.

Straightforward, right? Just be sure your turntable’s switch is set to “Line” and Kendrick Lamar can be quickly achieved. 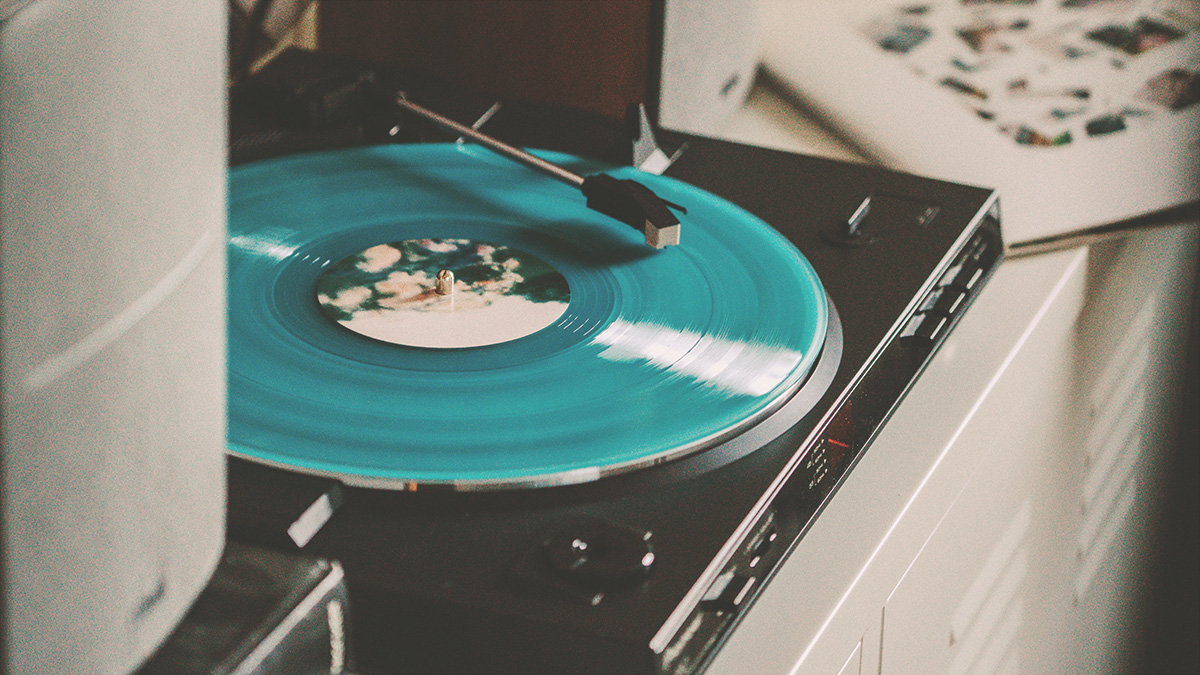 This system works on the exact same principles as everything we’ve discussed but does so wearing, at the very least, a sporty Canadian tuxedo. This is the least common configuration among the general populace, but perhaps the most common with old guys surrounded by records and cats.

All of the components are the same but they’re separated.

The phono preamplifier is a standalone piece of gear and often comes with a variety of switchable choices to best match with your phono cartridge. These kinds of preamps come at all price points, which we’ll discuss further in a guide coming later this year.

A line-stage preamplifier acts as the control center. It has nothing but line stage inputs, a volume control, and the ability to switch between inputs. There are some high-end preamplifiers that include very nice phono stages.

The power amplifier is the least complicated of all. It just produces wattage, amplifying everything passed on to it via the preamplifier and into the speakers.

Speakers in this type of system are of the passive variety 99.9% of the time, and the wire used to connect everything is glamorous enough to be called cable.

The advantages are that each piece of gear is designed to do one thing only, with no compromises in the signal path, and all of the power supplies are separated, so no electrical contamination. It’s all about purity, and if each piece is chosen to complement the other, then you’ll get great sound.

The basic rules still apply: For RCA jacks, red connects to red and white to white. For speakers, the positive wire stays positive and the ground wire stays negative.

This has been a lot of words for something that really isn’t that complicated; if we could hang out, it would have taken less than five minutes to show you all of this, because simple things are sometimes hard to explain.

If it still seems complicated, rest assured that a little hands-on experience will teach you all of this in no time. But don’t relax just yet, because you’re still going to have to learn how to properly set up a turntable and phono cartridge, and that process, my friend, has a lot of very important moving parts. 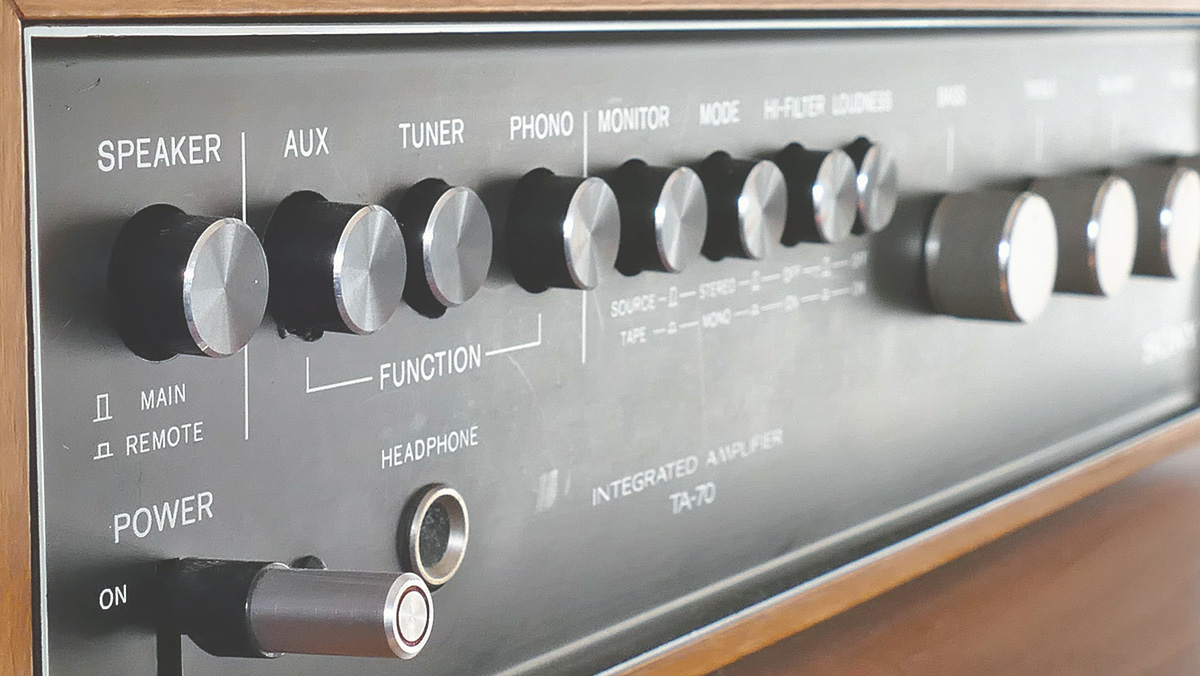 A receiver combines a power amplifier, a line-stage preamplifier, a radio tuner, and a phono preamplifier all in one box. After the rise of CDs, however, many manufacturers stopped including a phono stage, so if you’re shopping for a receiver, make sure it has a phono input if that’s important to you.

The same as above but without a tuner. Again, older integrateds from the 1960s through the early 1980s will almost certainly have a phono stage built-in. The option disappeared for many years but has definitely made a comeback.

A preamp is used in conjunction with a power amp. The primary reason for separating them is to achieve purity of signal, which many people feel leads to better sound. Just as with receivers and integrated amplifiers, preamps once had phono stages as a rule (these are called full-function preamps). Now, it’s around 50-50. That’s because people who favor separates will usually have a standalone phono preamp.

This is what takes the tiny signal from your phono cartridge and turns it into music via a process of equalization and amplification. They can be standalone units, built into a turntable, or included with a receiver, integrated amp, or preamplifier

Just what it says: All it does is generate watts to power your passive speakers while passing along whatever signal it’s been fed. There are tube amplifiers, solid-state amps, and hybrid amps, which combine tubes and solid-state.

The most common type of loudspeaker. They need to be juiced with some watts courtesy of an amplifier (or receiver, or integrated).

These have a built-in power amplifier, with one speaker boasting an amp, inputs, and volume control. It’s connected to the second speaker with a cable. If you have a turntable that has its own phono preamplifier, then all you have to do is connect the turntable to the speaker’s inputs.