From the garish to the alluring, records come in all shapes, sizes and (sometimes) smells with artists and labels alike constantly trying to one-up each other. While some of the more cynical types may view these unique records as nothing more than cheap marketing ploys, we like to think of them more as extensions of the artist’s vision — a personalized and physical manifestation of their music. With that in mind, we’ve curated a list of some of the weirder and more unusual releases we’ve found in the database. Water and electronics are never a good combo, but that didn’t stop British Indie band, Shout Out Louds. They sent out ten promo copies of their 2010 single, “Blue Ice,” with just a bottle of water and a record shaped mold. Carefully freezing water in the mold will yield a playable ice sculpture that lives up to the tune’s name. Just don’t let it melt while spinning! 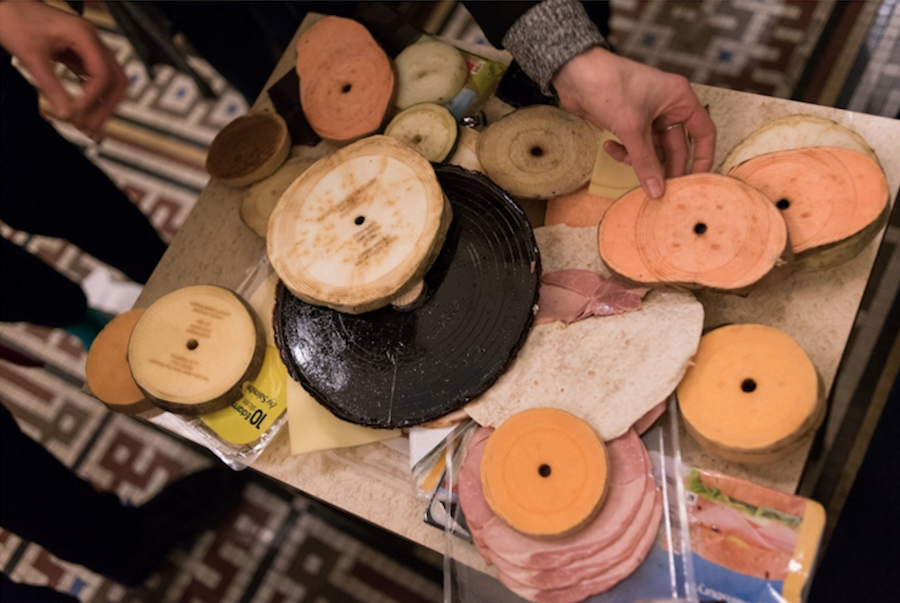 Matthew Herbert’s laser etched tortilla record might be pleasing to your palette, his label declaring the limited release of twelve tortillas to be “a first in a series of edible sounds” and an “opportunity to reflect on the foods that informed their creation and the soundscapes they produce.” Herbert is no stranger to unusual releases, so it’s not surprising that this experiment was followed by a DJ set in which he exclusively spun a handful of laser etched veggies and assorted cheeses. You can’t grab these one of a kind records on Discogs, lest you piss off the mail person by receiving some rotting vegetables in the post, so thankfully someone has uploaded DIY instructions to satisfy your hunger. Breakbot – By Your Side

Of course, a meal isn’t complete without dessert. Released with the tagline “Play it before you eat it!” Breakbot’s funky and carefree debut album, “By Your Side,” was pressed onto a chocolate shaped record that is, indeed, both playable and edible. Released as an exclusive for the former “trendiest store in the world,” the now-defunct fashion outlet Colette, only 120 chocolate copies of the French producer’s groovy debut were cooked up. Hey, we all know where food goes after its consumed. If you need some bowel movement inspiration, give the diarrhea infused “The Opium Den” by RA-X a spin. Yes, diarrhea infused — hemorrhoid infected diarrhea to be exact! Just be sure to bring some Febreeze as apparently the record produces a fittingly noxious odor while spinning. If you want to complete the toilet bowl collection, be sure to pre-order a urine infused record courtesy of Miley Cyrus and The Flaming Lips, ready to be pressed whenever nature decides to call. With rent going up and space already limited, maybe it’s time to downsize? And we mean literally downsize with this mini record player and accompanying pint-sized releases. This Bandai creation actually plays real tunes — you have your pick of a handful of classics by old-school acts like Judy Collins and The Monkees. In a move almost certainly done to infuriate would-be collectors, the petite records were released in unspecified packaging, so you had no idea what tune you’d get. With a limited production lifespan of less than a year, it’s all good (ie: expensive) fun. And yes… Jack White did this too. Considering White’s penchant for unusual records, it’s no surprise that he immediately jumped at the chance to get his music on the tiny format — the fact that the singles were three-inch releases must have sent him over the moon. Apparently, the story goes that for The White Stripes’ 2005 tour for “Get Behind Me Satan,” White bought up the rest of Bandai’s stock and repurposed the mini players and records as limited White Stripes exclusives. The rarest of the bunch? There’s “Top Special,” a song never released in any other format, and “The Denial Twist,” a piano-driven stomper released as a single from “Get Behind Me Satan.” You could only obtain the latter through Jack White personally, and there has yet to be a copy sold through the Marketplace. Ever since he donned a sparkling feather boa and unpacked his EMS suitcase synth, Brian Eno has been one of music’s most innovative and unpredictable figures. As much a visual artist as he is a musician, 2014’s “Someday World,” a collaboration with Underworld’s Karl Hyde (another accomplished multimedia artist), features an augmented reality component. By utilizing an Eno developed smartphone app, listeners can explore an ever-evolving digital landscape of colorful shapes and jagged skyscrapers as they wobble along with the album’s pulsing experimental electronics. While some may worry about natural forces such as excessive heat or nasty fingerprints ruining their records, Nik Colk Void, one half of British industrial noiseniks Factory Floor, purposely wants to lower that Goldmine grading. Mirroring the experimental approach that electrifies her music, Void released a live performance of “Gold E” with a playable polyurethane plastic sleeve that naturally degrades over time. Deemed a “living sound piece” by its creator, the sleeve’s grooves gradually warp and deform as time passes, thus changing the record’s sound in unpredictable and unique ways. Everyone from Grace Jones to Barry Manilow have embraced the ever-popular trend of releasing records shaped to their likenesses, while others have gone for more unique shapes. Talk Talk created a beautiful butterfly shaped record for their 1986 single, “Living in Another World,” and Money Mark released a 7” shaped like a Chihuahua for “Maybe I’m Dead.” However, none of these are more crowd-pleasing than Toto’s Africa shaped vinyl for their karaoke classic and “Toto IV” closing track, “Africa.” A totally obvious move, but damn is it a good one. This particular picture disc was actually reissued for Record Store Day 2017, proving the timeless quality of this cheesy yet addictive anthem. Hurry boy, it’s waiting there for you! Sugar Coat – Me Instead

While acts as varied as The Thompson Twins and The Locust have released records shaped as puzzle pieces, none were as committed to the concept as British Indie band, Sugar Coat. Whereas the aforementioned records could be played individually, the twenty-plus pieces of “Me Instead” has to be patiently put together before spinning. A collaboration with Finnish label Royal Mint Records, a label known for releasing wax in whatever style that suits their fancy, the band promised thirty-five more unusual releases for the single, though their abandoned Facebook and website suggest they may no longer exist. No matter, this particular puzzle single has found a small place in history thanks to an entry in the Guinness World Records Book of 2018.

Whether you find these releases to be gimmicky or worth dropping some serious cash on, there’s no doubt that nowadays vinyl is the only medium that can allow such unique creations. Musicians and labels have toyed with some outlandish takes on USB sticks and CDs, but nothing beats the literal flexibility that vinyl allows.

Have oddly shaped or weird smelling records? Or maybe you’re looking for a record to snack on?
Dig into Discogs for more outlandish finds.
For more news and fun database stats like this, be sure to subscribe to our Newsletters