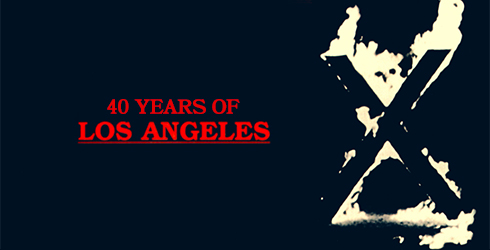 Los Angeles was a much different place when X released its debut album, Los Angeles, named for the city that the band had adopted. Forty years ago, Los Angeles still had a reliably seedy link to its noir roots, which was catnip to people like John Doe, who fled the East Coast for L.A.’s sunny days and debauched nights. They were a motley bunch. Doe and Cervenka were writers and poets. Zoom was a session guitarist who had trained as an electronics repairman and played a dozen instruments, fluent in both big band jazz and Gene Vincent. Bonebrake had studied classical music and played a mean jazz vibraphone as well as he drummed. All except Bonebrake were from somewhere else.

But in the sordid backwash of Hollywood and the near-nuclear fallout of the Ramones and Sex Pistols, they transformed into X. As we celebrate the 40th birthday of the band’s debut album, Los Angeles has lost none of its power, fury or artfulness, and remains a showcase for how the spirit of punk can be filtered through the familiar lens of rock and roll that had come before.

The heart of “Los Angeles” is clearly punk; Zoom’s lethally precise power chords and Bonebrake’s metronome-on-steroids drums propel the songs at a breakneck pace while Cervenka’s unhinged vocals speak to one of punk’s central tenets: Anyone can do it.

But there’s a higher level of musicianship at work here. Zoom is an encyclopedia of roots-rock guitar and he tosses in echoes of Chuck Berry and Scotty Moore. Doe is the Paul McCartney of punk bassists, always finding inventive ways to melodically underpin the songs without losing intensity, and his smoked honey of a voice in harmony with Cervenka’s squall is one of the band’s signature sounds.

Doe and Cervenka filled Los Angeles with lyrics straight out of a poetry workshop — elliptical, evocative, blunt, beautiful and violent, like if Dashiell Hammett did slam poetry — and the combination of bohemia, musicianship and aggression made Los Angeles soar. And if Ray Manzarek seems an unlikely producer, consider that The Doors were legends in L.A. and he had considerable street cred.

“Sex and Dying in High Society” reads like a film noir treatment about a woman who has sold herself for the security of a connected marriage. Not an incredibly original premise, but the details are what make it work, especially the bit where the woman makes her maid use a curling iron to burn her back just to feel something. Manzarek spices the song with a perfectly placed flourish of synthesizer.

“The Unheard Music” is an efficient summation of punk culture, ominously set to a dirge-like metal riff. “Friends warehouse pain/Attack their own kind/A thousand kids bury their parents” conjures the desperate physical release of a mosh pit, teenagers cutting themselves loose from families they don’t want to be with the family that they choose.

“The World’s a Mess; It’s in My Kiss,” besides being a rare example of the proper use of a semi-colon, is also a love song that doesn’t back down from how terror and wonderment walk hand in hand when two people try to make a life together. It comes off as an update of 1950s teeny-bopper love songs with Zoom busting out his best Berry licks behind Cervenka and Doe’s anti-harmonies.


The album’s best-known song is the muscular title track, which is intoxicating in its ferocity and concision. As political correctness has grown into a casual hobby, there have been efforts to paint the song as racist, which is at best a ridiculous argument.

It’s clearly about a racist, not to mention a homophobe, and the song’s impact and meaning would be neutered by euphemisms that dance around the truth. That truth is what makes the song so powerful, as well as the sledgehammer authority with which Zoom, Bonebrake and Doe attack every second of the brief 2:25 it lasts.

The album’s overall effect and impact is visceral, literary and uncompromising. X went on to make six more studio albums, embracing more of the band’s folk, country and rockabilly roots as the years passed. The first four albums are considered classics, but “Los Angeles” remains the gold standard.

Clean original Slash pressings of Los Angeles have been climbing in price but the record has been remastered and reissued several times by Rhino, Porterhouse, Music On Vinyl and most recently Fat Possum; other than the acclaimed Porterhouse pressings, the consensus seems to be that they’re all roughly equivalent to an original.

Whichever one you track down, you need to own it — assuming you have a thing for punk, or just good music — as it’s a touchstone of the genre and a keeper for any well-curated collection.

The band recognized the significance of Los Angeles with the surprise release of a new album, Alphabetland, nearly 40 years to the day after their debut. It’s the band’s first studio album since 1985 to feature the original quartet, which was fractured when Zoom left following Ain’t Love Grand. His return brings X full circle as Alphabetland is classic Los Angeles-era X: hard, fast, uncompromising.